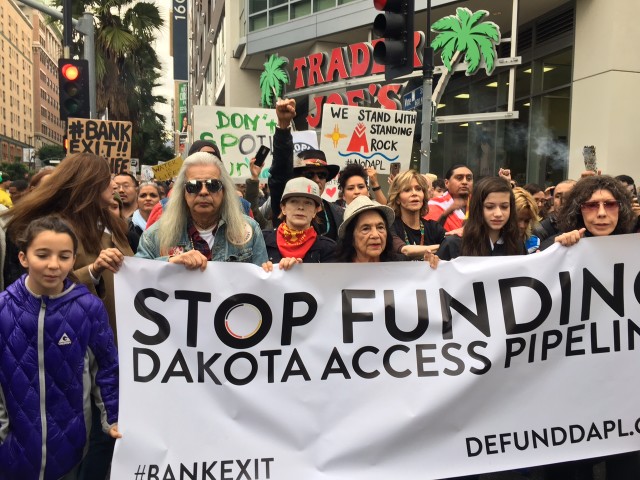 On my 79th birthday, Winter Solstice, I participated in a big action in Hollywood with many Indigenous leaders, friends, family and celebs to call attention to the #DefundDAPL movement, suggesting that people pull their money out of banks that have loaned to the North Dakota Pipeline. I withdrew money from Wells Fargo and sent the letter below to Tim Sloan, CEO of Wells Fargo. You can see Lily Tomlin on the far right, Catherine Keener on the far left, Frances Fisher, Delores Huerta and Viva Vadim, my granddaughter in the middle. I’m a little behind. 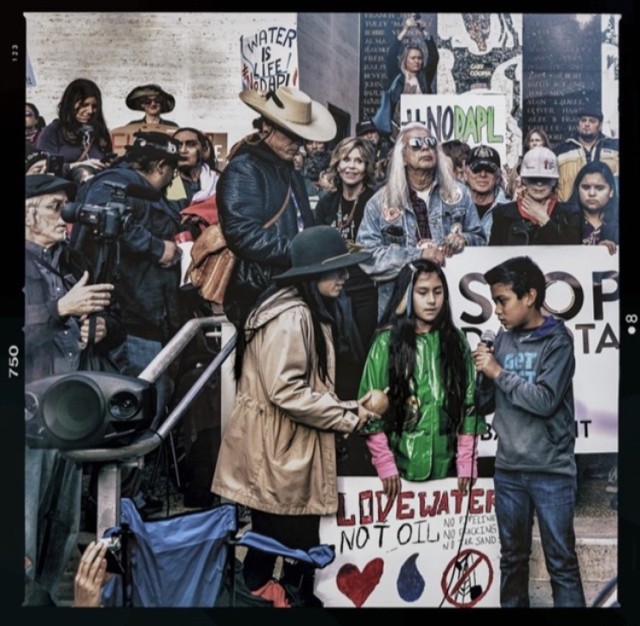 It was very colorful with drummers, dancers, prayers and youth from an LA-based Indigenous school who sang happy birthday to me in their native language. Then we briefly closed Sunset Blvd with a native “circle dance.”
It was the best birthday ever.

As a customer of your bank, I reject the notion of my money helping to support your investment in the Dakota Access Pipeline (DAPL), an inherently dangerous and unjust oil pipeline that threatens air and water quality in many states and violates sacred lands of the Standing Rock Sioux Tribe.

The fact that Wells Fargo has invested money in DAPL indicates corporate irresponsibility and hypocrisy. As a signatory to the Equator Principles, how can Wells Fargo be associated with these companies? Even minimal due diligence shows that Energy Transfer Partners and Sonoco, the companies that own and operate the pipeline, have the worst oil spill records in the United States. How can I trust a bank that was not aware of this or the National Lawyers Guild’s list of lawsuits against ETP for contaminating groundwater in the states of New Jersey, Vermont, Pennsylvania, the Commonwealth of Puerto Rico and the City of Breau Bridge Louisiana; in addition to citations for releases of hazardous materials in Ohio, Oklahoma, Louisiana, Missouri Texas, Pennsylvania and Hawaii?

DAPL already crosses a vast stretch of land and is asking to dig beneath the Missouri River. Yet, shockingly, despite its horrific record of contaminations, DAPL has not been required to do a full Environmental Impact Statement. And why is your bank sinking so much money into maximizing the amounts of oil and gas that can be brought to the surface and burned at a time when climate science is clear: we must maximize what we keep in the ground.

Oil prices have dropped and production from the Bakken Fields has declined a stunning 25% from its peak in 2014. This means that, on top of everything else, DAPL is redundant –there is no economic rationale to increase the regional pipeline capacity.

I ask that Wells Fargo withdraw its financial support of DAPL until a full scale environmental Impact Statement is completed and the outstanding issues with Standing Rock Sioux Tribe are resolved to the Tribe’s full satisfaction. Until then, I am withdrawing my money from your bank.