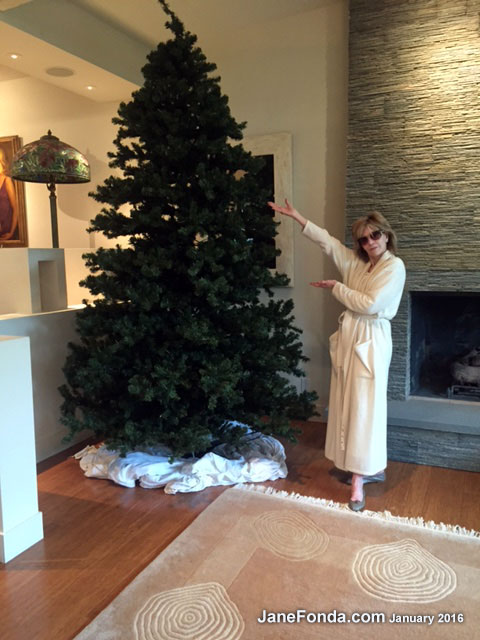 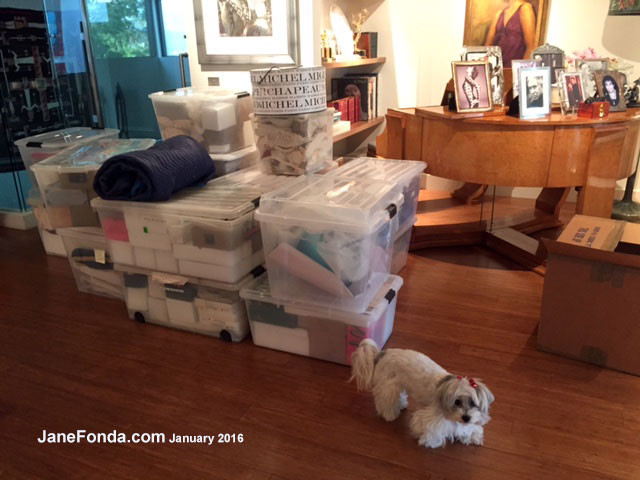 It took me about 2 days to decorate the tree and get things ready for the 8 days I had with my children and grandchildren. It took a bit less to take it all down. I enjoyed both actually. I was alone when I took it down (Except for when I was on top of the ladder and had to hand ornaments down to Dina) and this gave me a chance to really reflect on each ornament and marvel at the many twists and turns of my life that each one represents…some have been with me since Dad put up the tree. Others have seen 3 husbands. Some I made while filming “Barefoot in the Park” and as I wrapped them back up I thought about how great it is that I’ll be doing another movie with Bob. Some I made with my grandkids while I lived in Atlanta. Some I bought with Richard when we celebrated our first Christmas together. I have a star of David with “Our First Xmas” written on it and that year we fortuitously found a treasure trove of musical instrument ornaments which made him more excited about that first small tree. He wasn’t in the habit of celebrating Xmas like I do and marvels at the effort I put into it.

I love this stretch of time between the Christmas Holiday and tomorrow, when business starts up again. A lot of people are out of town. It’s quiet and chill (literally here in L.A. and figuratively). I take an extra hour to read the paper. I don’t get dressed till—well, one day not at all and right now it’s 2:45pm and I’m still in my bathrobe. I catch up with myself.

I’ve also watched just about every film that has a chance of being nominated for an Oscar and, in fact, I just submitted my nominating ballot. (I’m not telling!) This was a truly extraordinary year for film, in my opinion. Choices were hard to make. Let me mention 2 films that didn’t do so much campaigning and aren’t on everyone’s “Most Probable” list: “The End of the Tour” starring Jesse Eisenberg as a Rolling Stone reporter who is doing a story about the writer David Foster Wallace played brilliantly by Jason Segel. In fact both actors are extraordinary and the film is a highly intelligent, subtle study of celebrity, art and ambition. The other film that surprised me is “Legend.” I saw “The Revenant” and asked who played the bad guy. It was Tom Hardy and then a lot of folks said, “You gotta see him in ‘Legend'” There he played twin brothers who are British gangsters. He is really amazing in this film. I came to think of the 2 brothers and different people even though Hardy was playing both. And, as the more together of the brothers, Hardy is like a new Brando.

There is an outstanding question that George Reese asked me in my blog comments on Dec 15 that I promised I’d answer and now I have time. He wanted to know why “a 2-time Academy Award winning actress had to take acting lessons.”

I mentioned in a previous blog that after Season One of Grace & Frankie, I started working with an acting coach (and therapist). There are several reasons:
1. Unlike painters or musicians whose instrument is outside themselves —what sounds they make come from a piano, what colors and shapes are put on a canvas—actors’ instrument is ourselves. Our creations and choices come from our tone of voice, our bodies, our faces that are animated by our emotions, energy, attitudes. Unresolved events in our lives can be triggered when we work on a particular kind of character or scene and we become stuck and not know why. This happened to me and I retired from acting for 15 years because all of those most intimate, personal things were not flowing properly. I was stuck. I thought it was forever. I was wrong.

2. When, after all that time, I started acting again, I began to feel I was relying on old habits and I started to question if I was meant to be doing this again. It also occurred to me that maybe my ‘instrument’ needed some tuning up. As Jason Segel says in a recent interview about playing the role in “End of Tour” which was very different for him, “I’d done so much, but now I had to start from scratch.” I sort of feel that way. Like a newbie. It’s an interesting thing to experience when you’re my age and I am grateful for it. I’m glad I still not willing to settle. I want to flex new muscles. In fact, working with a coach is a little analogous to working out with a new exercise instructor. If they’re good, they encourage you to expand, leave your comfort zone, dig deeper. I may fall flat on my face in the process but I want to stretch. And I’ll continue to work with a coach and return to therapy when I feel it necessary. It sure helped me last year!

I hope this answers your question, George.
Happy New Year to all. What I wish for most is moving closer to a world that is safer—for the environment, for women, for children, for those who are ‘different.’ Let’s learn to embrace what’s different. Love and empathy, not saber rattling and entitlement, are what will defang the ISIS of the world.