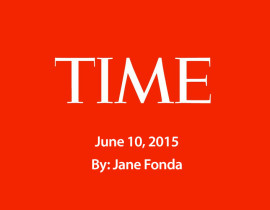 Jane Fonda is an actress, writer, and activist.

In less than 30 days, Royal Dutch Shell wants to begin drilling for oil in the newly ice-free parts of the Alaskan Arctic. The company is ignoring the advice of engineers and scientists around the world who say this type of extreme fossil fuel project can’t go forward if we have any hope of stopping the most catastrophic effects of climate change. From India to Australia, we’re already dealing with droughts, superstorms, and resource scarcity caused by climate change, and if we don’t change our energy system to help protect the Arctic, it will all only get worse. But instead of seeing this as a what it is—a tragedy—Shell is using the melting Arctic as an opportunity for profit.

In 1979, I was in a movie with Jack Lemmon and Michael Douglas called The China Syndrome. In that film, we dramatized how corporate greed can trump safety with potentially tragic results. The scenario seemed all too real for people when three weeks after the premiere, the Three Mile Island nuclear disasterstruck Pennsylvania. We found we had unwittingly captured a tragic zeitgeist and helped further popularize the anti-nuclear movement in the United States through our story. It felt like maybe the tide was turning towards protection rather than exploitation.