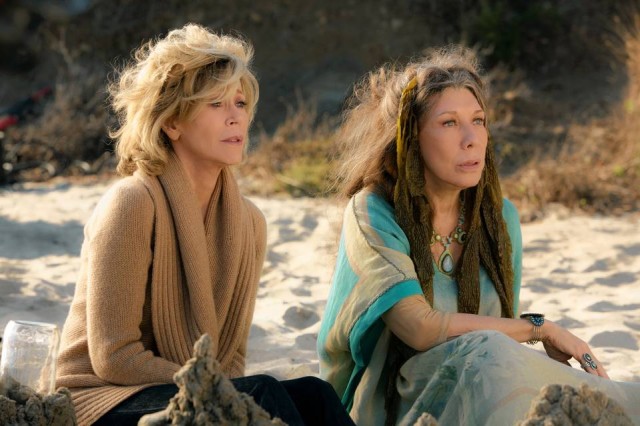 Two male law partners fall in love and leave their wives, women now bereft and enraged—all of which makes for stellar comedy

Refreshing isn’t the likeliest word to come to mind as regards “Grace and Frankie,” there being no dearth of gay-themed entertainment on the TV these days. Still, this buoyant Netflix series about two male law partners who fall in love with one another and leave their wives turns out to be just that—refreshing, but also a good deal more. In this steadily acerbic if also predictably warmhearted tale (created by Marta Kauffman and Howard J. Morris), there’s a good bit of probing, though not, mainly, of the flashily up-to-date subject of those gay husbands, Sol (Sam Waterston) and Robert (Martin Sheen) about whom the writers don’t seem to know or say very much—much that’s credible, anyway.

Things are different when it comes to Grace (Jane Fonda) and Frankie (Lily Tomlin), the wives they’ve left behind and about whom we learn a great deal, very soon. The series never for a moment lets you forget this is comedy. It’s nonetheless clear, as the action progresses, that the show has its mind on matters other than husbands coming out—matters like women suddenly alone, women no longer young, marriage itself—large subjects it pursues with a keen instinct for the hilarious and no stops for right-minded messages. To the contrary. Frankie—a ’60s-era leftover permanently devoted to pot, peyote and good works, like her personal art school for ex-convicts—is the perfect face of fevered environmentalism. In a rush to leave the house for an important gathering, she stops, paralyzed by the sight in her kitchen, of empty bottles with their caps still on. It takes very little time, she warns Grace, before “ecological entitlement becomes environmental rape.”

The two are going to pay respects to the widow of a just deceased old friend, an event attended by many people they know, including their husbands, coming as a couple—reason enough for Grace, miserable at the loss of married life, to expect humiliation. Which comes in all degrees. First she sees Sol—the lover for whom her husband, Robert had left her—sporting a necktie she’d bought that very husband for a Father’s Day gift. People who know the wives’ situation stare and whisper. Grace wants to flee. Frankie, no less miserable than Grace, is triumphantly rude. “Excuse me, I have to count the bulbs in that chandelier,” she snaps when an inquisitive guest tries to engage her in conversation.

The husbands themselves are having no easy time. Mr. Sheen’s Robert, an authoritative sort and the more restrained of the two, isn’t pleased when the effusive Sol—a riotous Sam Waterston—happily informs a group of dumbfounded guests that the two of them are law partners and also homosexual partners.

It’s around this time, too, that complex feelings about the wife’s he’s left behind intrude on Robert—among them the recognition that he hasn’t altogether put her out of his mind. Looking at her at the gathering, he recalls, dreamily, how it could make a man feel to walk into a room with a woman like that. But Grace, sleekly beautiful at age 70, is now walking into rooms with Frankie, her partner in sorrow and rage, with whom she’s forced to share a house, a circumstance both of them loathe.

As the title tells, they’re the story here—two women who cordially detest everything about one another’s habits, views, values, working their way toward an alliance. Grace, who once ran a beauty products company and who would rather die of pain wearing killer heels than spoil the look of an outfit, now lives with someone whose clothes reek of pot, and who fills the house with weird chanting and, occasionally, with those ex-convicts. Frankie, immovable, is full of her own lofty contempt.

Ms.Tomlin and Ms. Fonda make an immensely potent comedy team. Together, and also separately, they’re the source of most of the ebullience, style and assorted other pleasures of “Grace and Frankie,” and those are considerable.