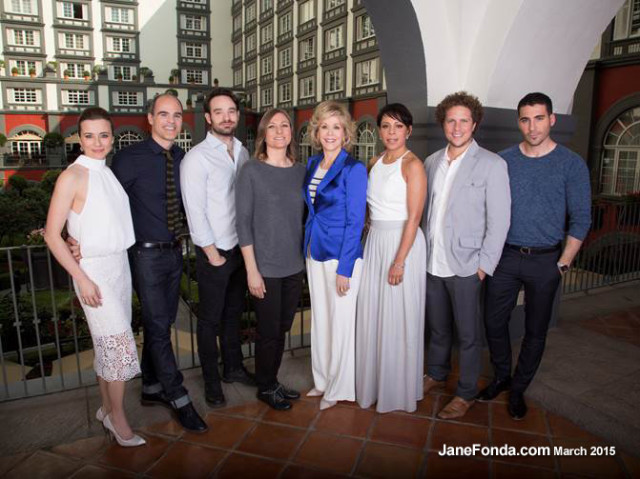 A bunch of stars from various Netflix series came to Mexico City to promote their shows. Mine, of course, is “Grace and Frankie” which streams on May 8th and you can watch the entire first season in 6 1/2 hours!

We all stayed at the Four Seasons which was very nice. 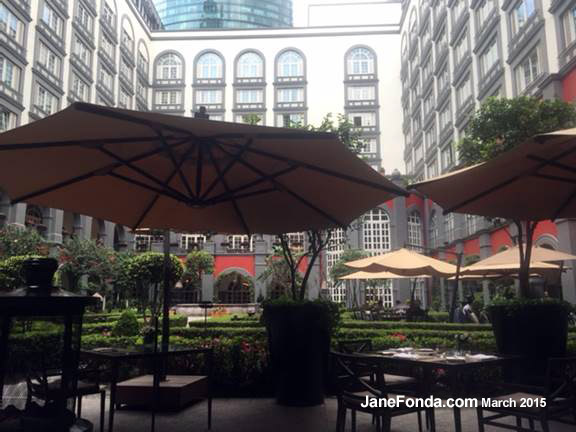 My first morning I got up at 4:30am (3:30 in L.A. which is where my head and body were at!) to get ready for a very popular early morning TV Show, the equivalent, I think of “Good Morning America.” 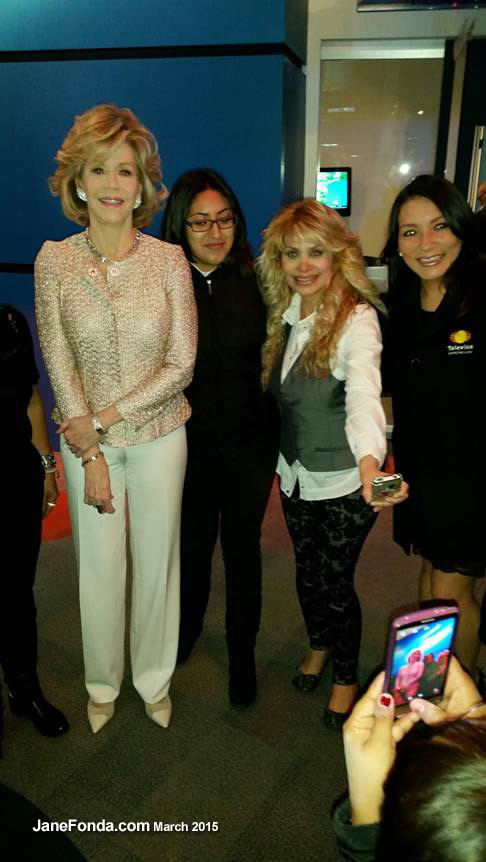 Some of the staff at the station wanted their pictures with me. 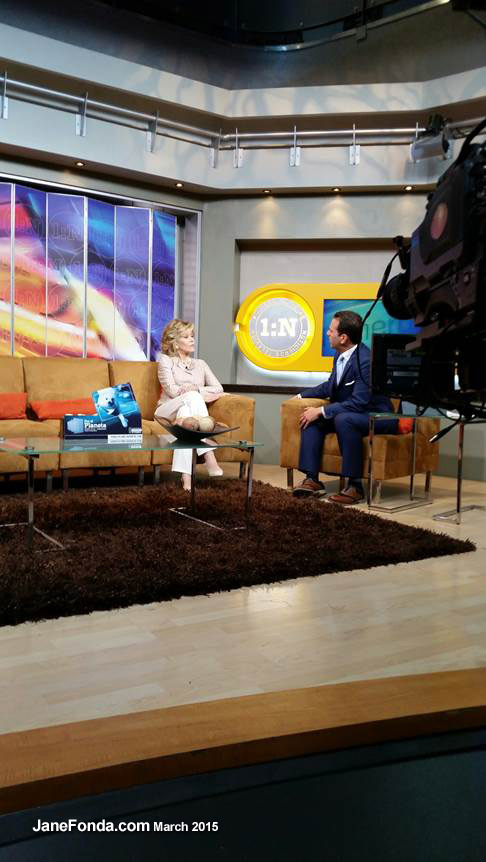 That night I took my team to dinner. I remembered when I spent 5 months in Mexico shooting “Old Gringo” with Gregory Peck in 1988 I was surprised how different the food was in the best Mexican restaurants than Mexican food is in the U.S. I found the same thing to be true of Italian food. So much better in the best Italian restaurants in Rome, Milan or Venice than in even good North American Italian restaurants. I wanted my team to see what I meant. 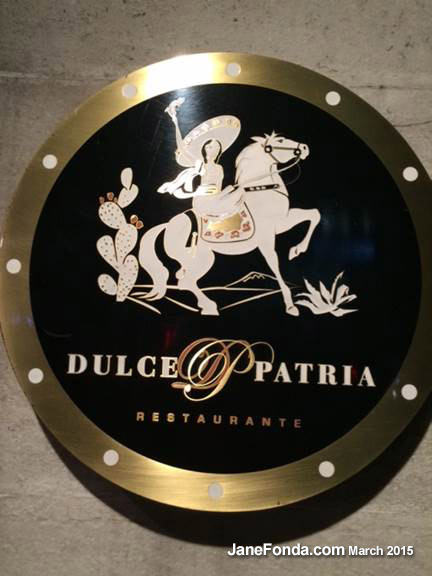 The architecture inside is clean and modern 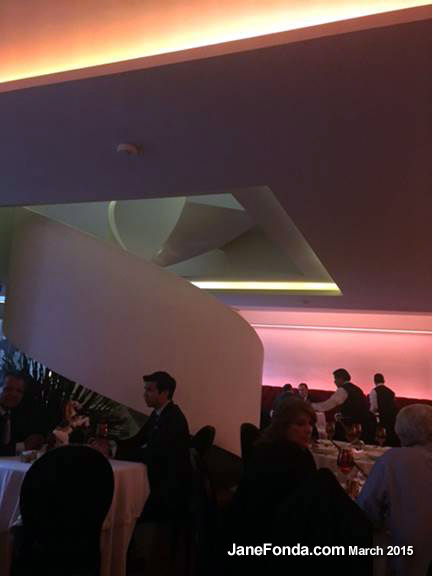 Here we all are, left to right: Matthew Shields, my hairstylist, Collier Strong, Makeup artist, me and Pearl Servat, my publicist. 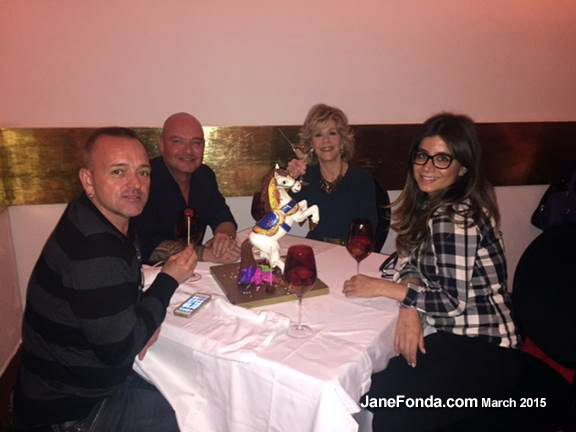 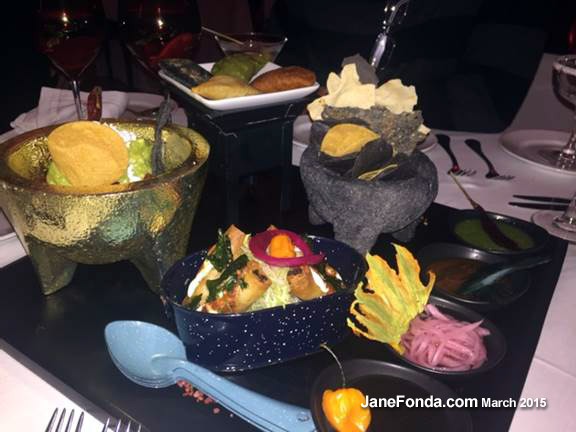 I ordered my usual vodka martini instead of a marguerite and was surprised how small the glass was . . . so of course I had 2!! 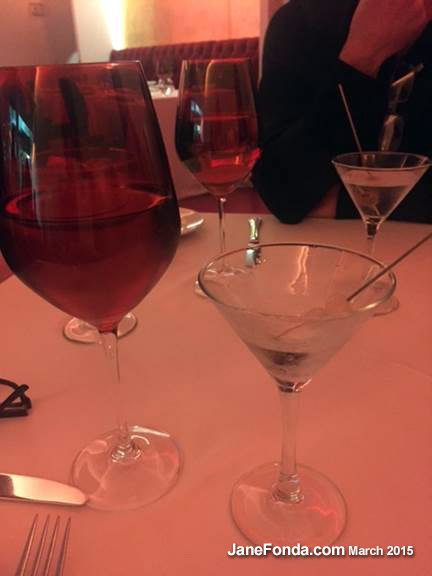 For my entry I got braised short ribs with chamomile sauce which I shared with Pearl and she shared her duck mole with me. The short ribs were the best, melt-in-your-mouth I’ve ever had and with no fat. Here they are: 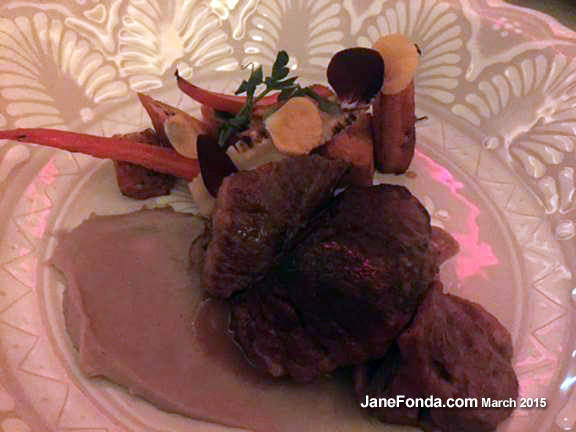 And here’s the duck mole—also delicious 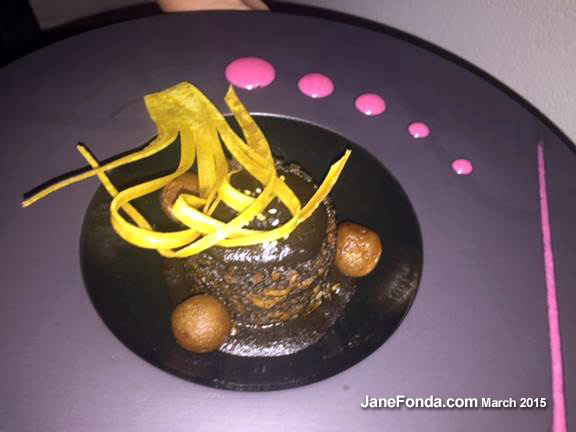 The desserts were spectacular: a plate of unusual Mexico candy that arrived on a platter with the restaurants logo horse 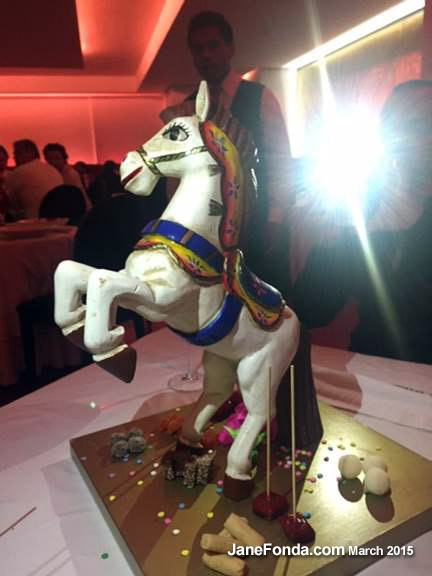 And an assortment of custards and sweets that somehow told the history of Mexico although I was unable to write down what the chef told me about this . . . and only partly because of the 2 martinis. 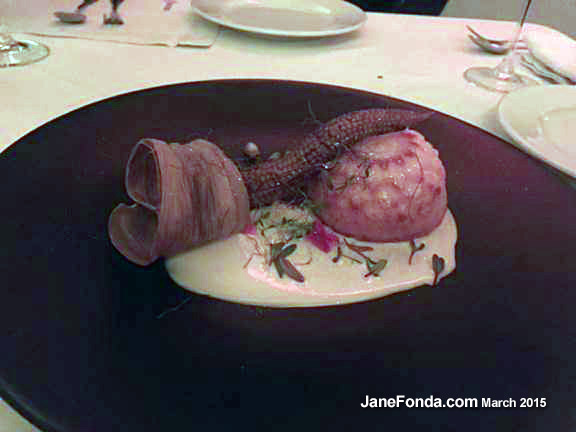 The chef came out to see us and I was happy to see it was a woman, Martha Ortiz, who is also the owner. Isn’t she beautiful! 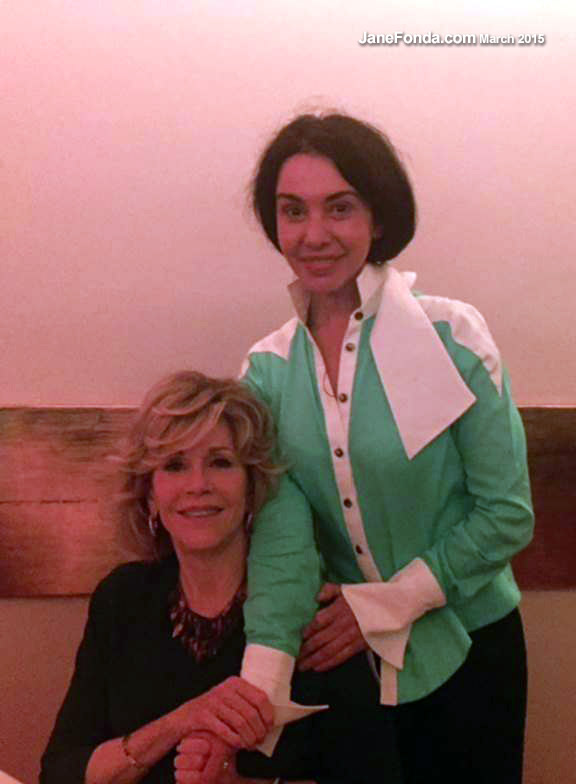 The next day all the actors got together for a press conference with journalists from all over Latin America. 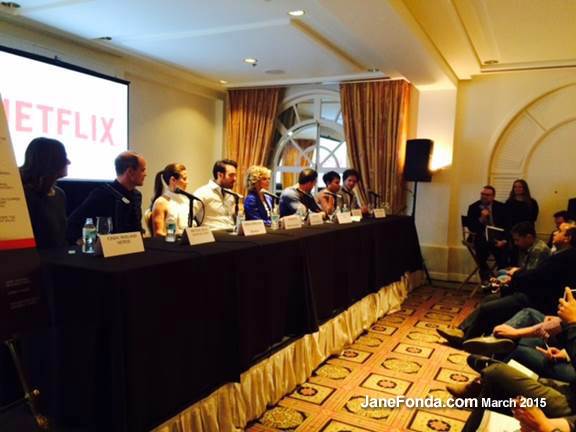 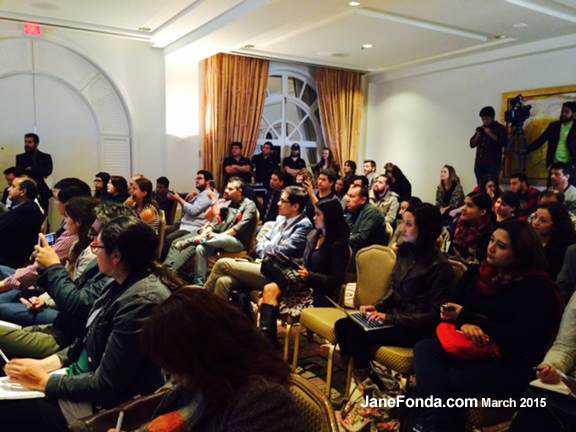 Following the press conference we went to separate hotel rooms where one by one, the individual reporters came and interviewed us. Most of them had seen the first 5 episodes of “Grace and Frankie” and they all appeared to really like it. They commented on how there really isn’t anything like this series on television; they mentioned specific moments that made them laugh or cry. They said they found the series much more real than they’d expected given that it is described as a comedy. I don’t like to call it a ‘dramady.’ That term feels boring and stereotypical. But there is a lot of poignancy in it. It’s the most challenging thing of all—finding that fine line between funny and serious, and, given that Grace and Frankie find out right at the start of the first episode that their husbands of 40 years are leaving them to get married—to each other—, there’s a lot of pretty painful stuff that goes on.

At the end of the day, I had a dialogue on-line with Linda Cardelinni who is a star of the new Netflix series “Bloodline” co-starring Kyle Chandler, Sissy Specek and Sam Sheppard. Gotta watch that one! Linda and I had a good time asking each other questions about our shows, our work and how to balance work with personal life—she has a 3-year-old girl. 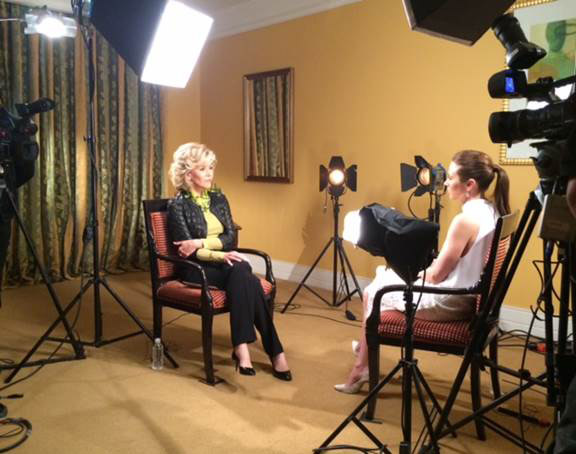 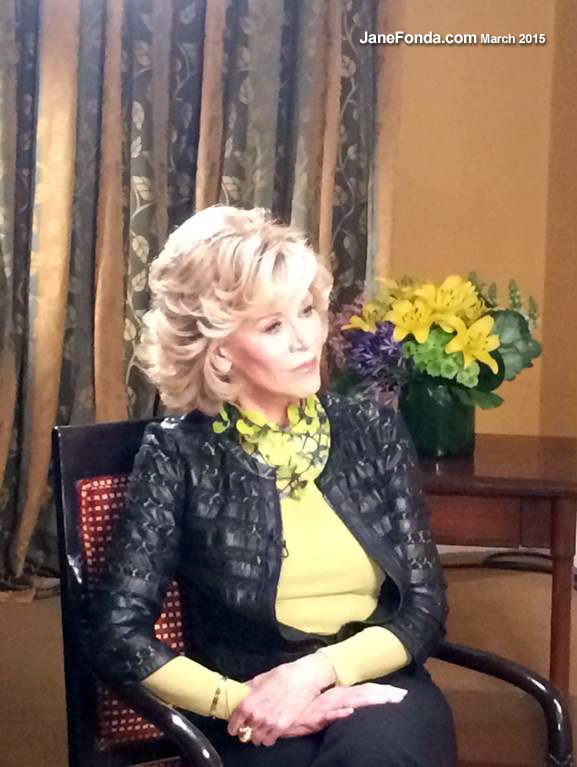 I’m posting this picture of me just to show off my necklace, which is made of recycled tires.

The work day ended by 4pm so I still had time to go to the hotel gym for an hour and to meditate for an hour.

One reason I’ve written this blog is to show you how much work is involved with making a series or a film. It isn’t just about the actual shooting which is hard enough. Afterwards you spend something like a month or two promoting what you’ve done, and that usually entails traveling to foreign climes. There are some actors who refuse to do the promotion part of the work (I won’t name names). I’m part of the old school—promotion is part of the job. Besides, if you believe in your work why not do your best to get people to see it?

A final question: There’s a lot about food in this blog. I sometimes take pictures of what I’m eating but not sure you like that. Should I continue to do that sometimes? Tell me the truth.