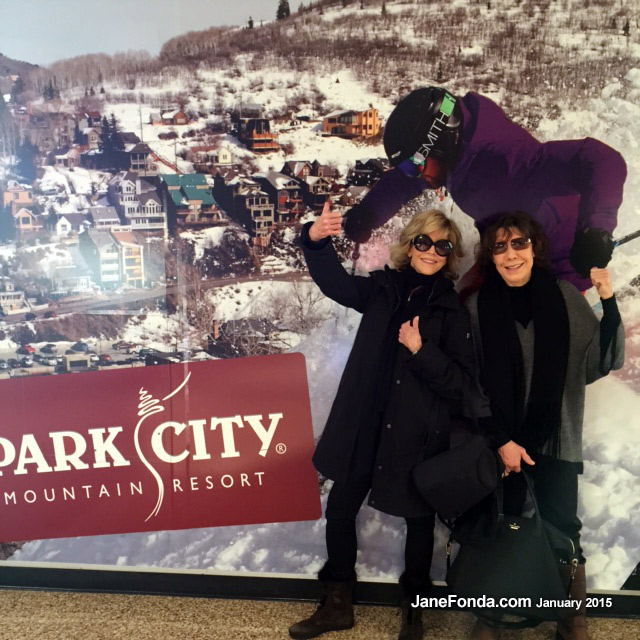 We left Los Angeles Sunday January 25th for Park City and the 15th annual Sundance Film Festival. Hard as it is to believe, Lily had never been and I had never gone not to work but just to see films. It happened like this: Our friend, Pat Mitchell, who among her many titles became Chair of the Board of the Sundance Institute this year, invited Lily and me to be interviewed by her for the Women In Film brunch Monday morning. Lily’s new film, “Grandma,” was premiering on Friday at the close of the festival and I persuaded her to hang with me for the whole week to see films.

Here we are at LAX waiting for our plane. 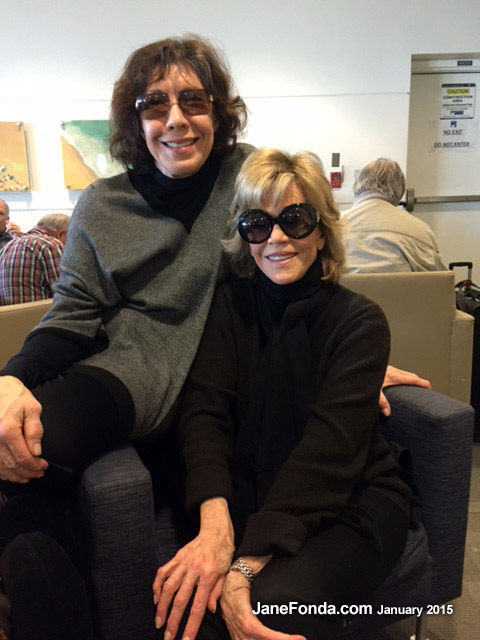 We were shocked to see that the cost of a luggage cart has gone up to $5 in Park City. 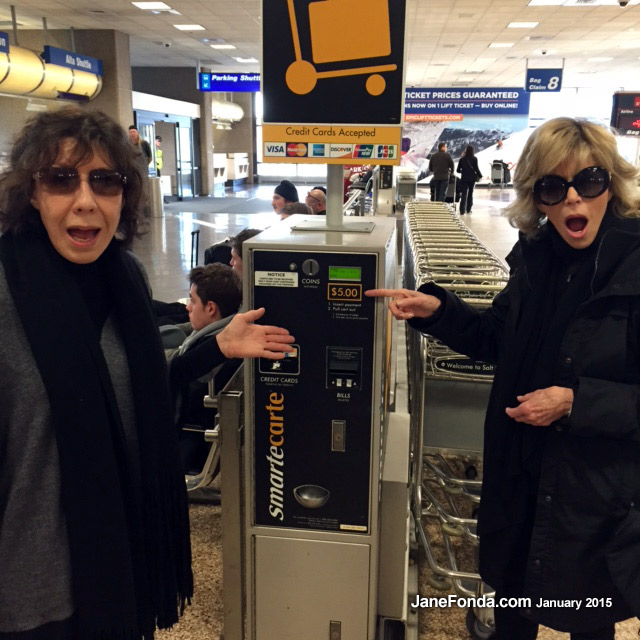 Here’s a view of Park City. It has grown a lot since I first saw it in the ’70s en route to Bob Redford’s Sundance ski resort–this was before he created the Institute or the film festival. My son Troy learned to ski there. Still, signs of the old Park City as a mining town are evidence and charming. 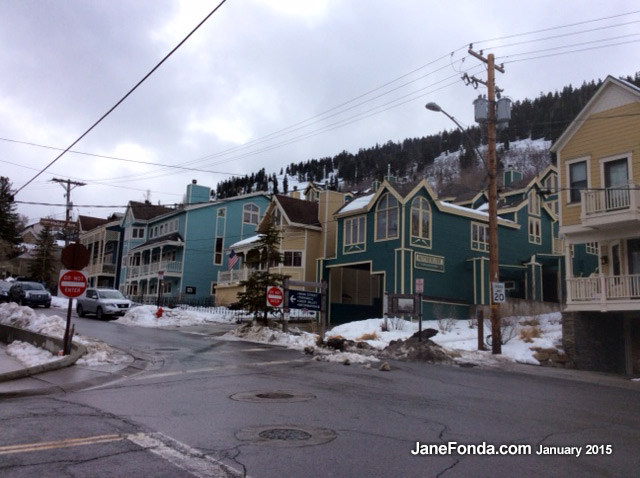 The view from my room at The Marriott Hotel. I wish I could still ski: 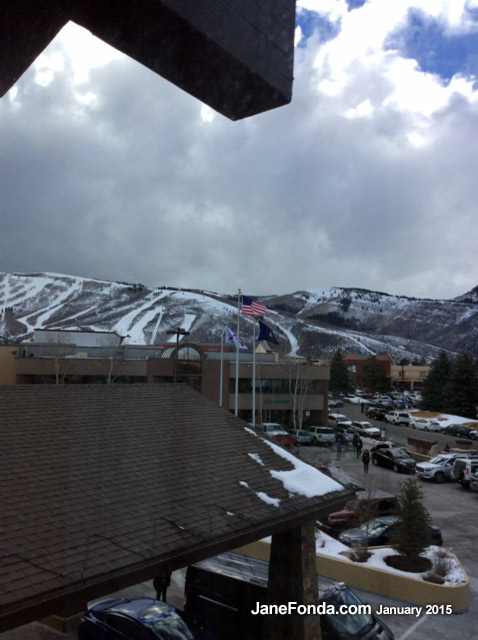 That first evening, Pat invited us to join her and her family and friends at Bob Redford’s restaurant Zoom. Left to right: Pat, John R. Seydel, our joint grandson (his mother is Ted Turner’s daughter and his father is Scott Seydel’s son Rutherford and Scott is Pat’s husband. Got it?); Clark Seydel, Scott’s son with an earlier wife, Michelle LeClair, Lily and music composer/producer Tena Clark. 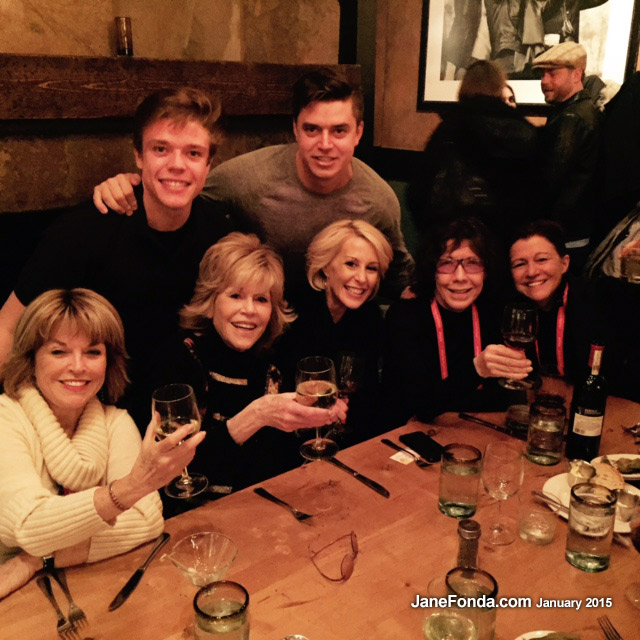 Lily and I left dinner early to see our first film. Here’s a video of the ride down main street.

Through all of our goings and comings, I noticed that Lily seems susceptible to losing things or leaving them in her room. I had to pay close attention.

There’s something thrilling about being in a theatre packed with people from all over the country (even the world) who are passionate and knowledgeable about film. You can feel it in the air and in the inevitable conversations that start with strangers about the pros and cons of different films and documentaries you’ve all seen. 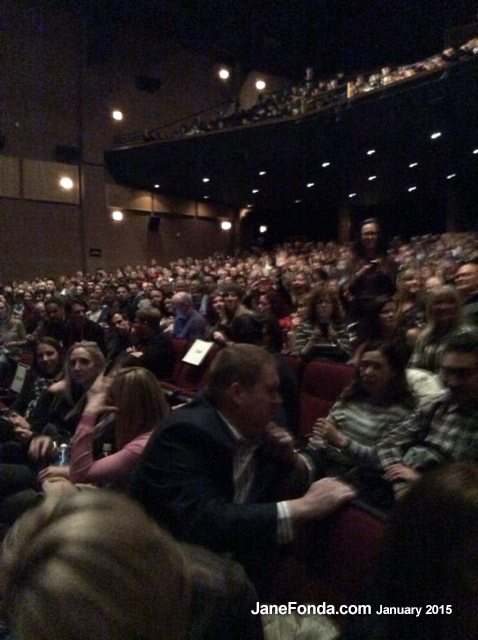 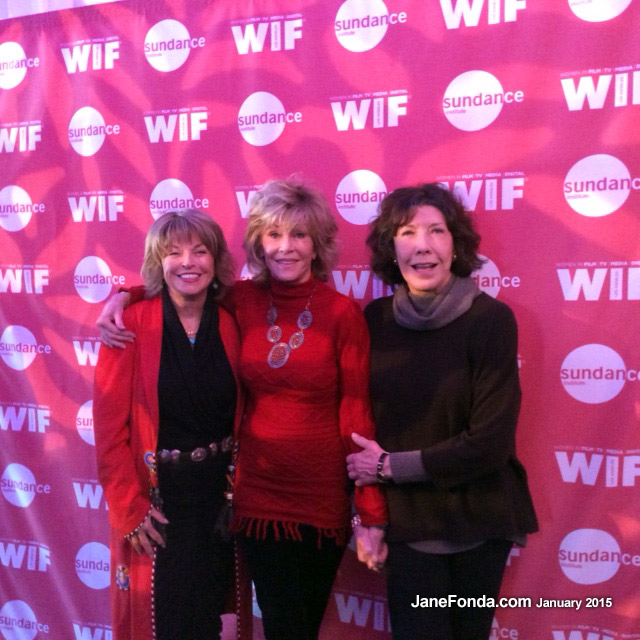 Here we are with trainees and mentors 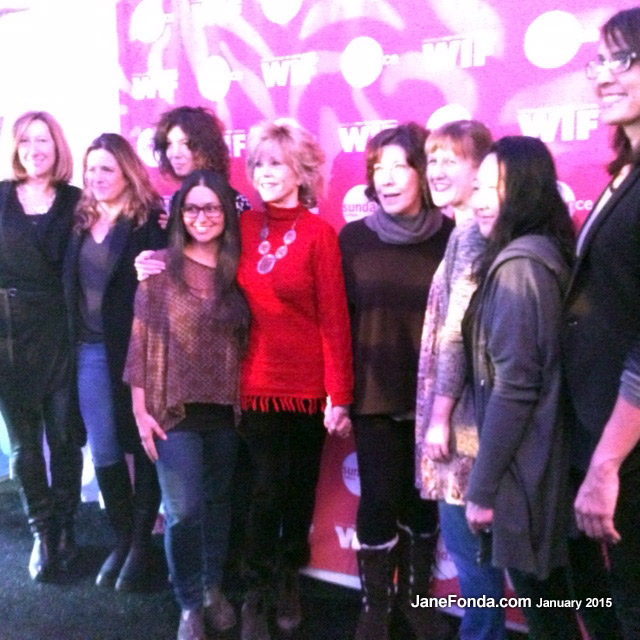 They expected around 300 people but 600 plus showed up and food was scarce. Didn’t matter. Great energy! 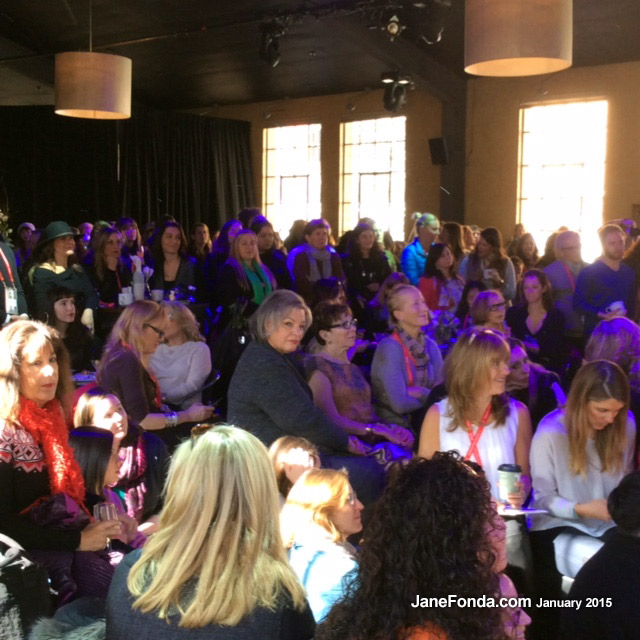 Below on the left is Cathy Schulman, Director of Women in Film and on right is the Executive Director of the Sundance Institute, Keri Puttnam. They discussed, as did Lily and I, the need for more women-directed films. 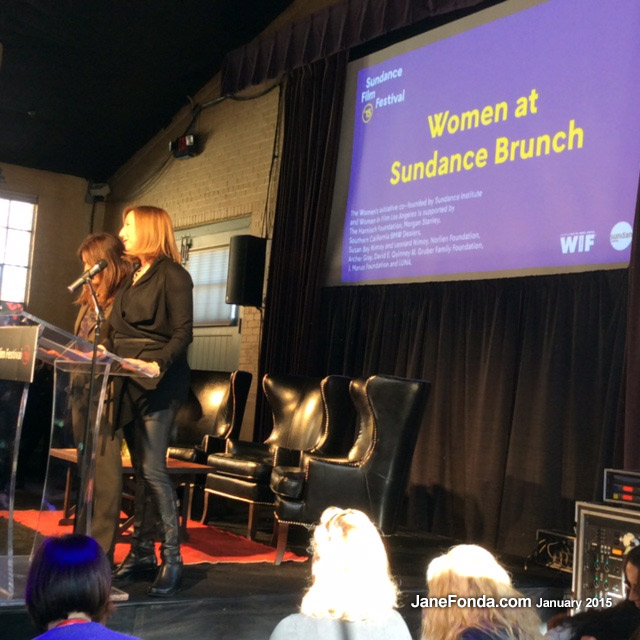 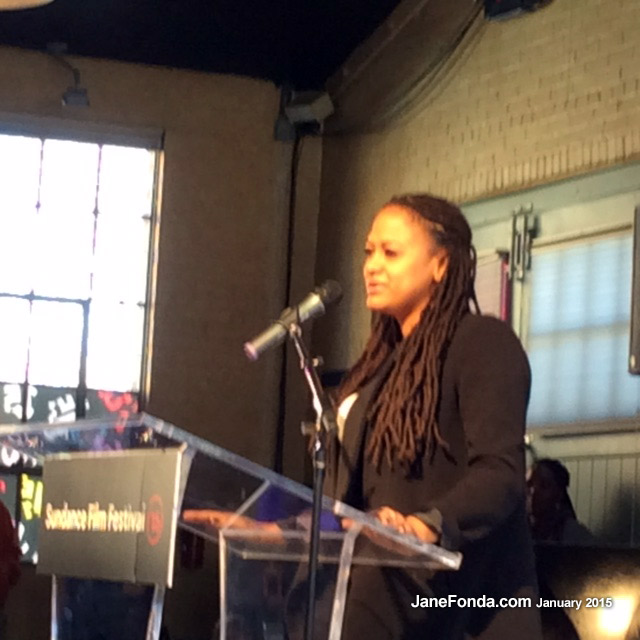 Pat is a terrific interviewer. We talked about the reasons there aren’t more women directors (major studios are run by men who feel safer betting on what’s familiar…what looks like them…and with few exceptions, the very few women who have run studios have not been staunch supporters of women directors. So why is this an important issue? Women see things differently. The subjects, the stories that appeal to us are very often different from those appealing to men. Not always but in general, women tend towards relationship-based films rather than violent, special effects-laden movies or what have come to be known as ‘tent pole’ movies with humungous budgets. And it’s not just a question of women not having experience making big budget films. Men who lack that experience have been hired to direct movies with budgets over $100 million. If there were more staunch women heads of studios there’d likely be more films directed by women and more women in the lead roles. When this is missing, the issues, concerns and sensibilities of half the world’s population is missing in action and, since most people don’t even think about it, they view the situation as simply the way things are. Fortunately, women directors have been gaining ground in the independent film and documentary fields and the problem is being discussed more and more so that, eventually, the situation will hopefully change. I hope I’m still around to see it! 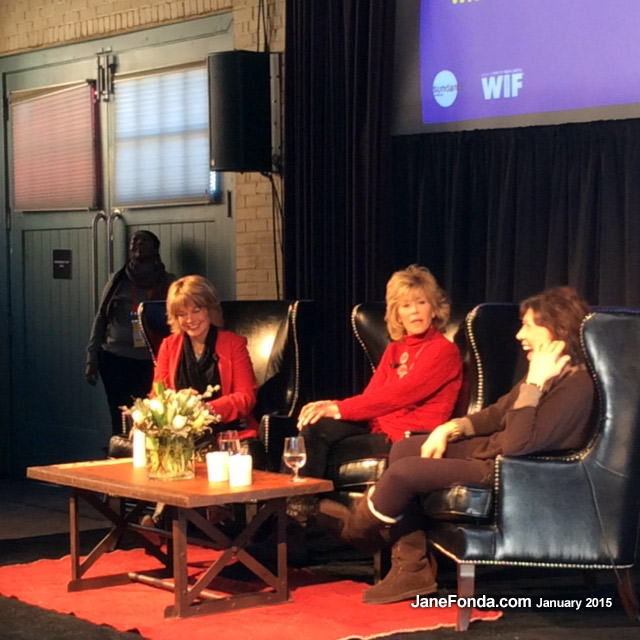 As soon as the brunch was over, I rushed off to see my second film, a powerful, disturbing documentary called “Prophet’s Prey” directed by my talented friend Amy Berg. Lily didn’t come with me because she had interviews to do for her film, “Grandma” which was closing the festival on Friday. In fact, I saw 4 films without her but I hooked up with my friend, Teri Schwartz, Dean of the UCLA School of Theatre, Film, and Television for one of them. She’s taught me a lot about how it is for women directors. She told me that the male film school graduates get managers and agents immediately and the women don’t. It’s a problem that starts right at the get-go!

Even when Lily wasn’t with me, I saw her on the screen at every film. Here’s her face as Grandma in the montage of all this year’s festival films that precedes each screening. Isn’t that a lovely, soulful face! 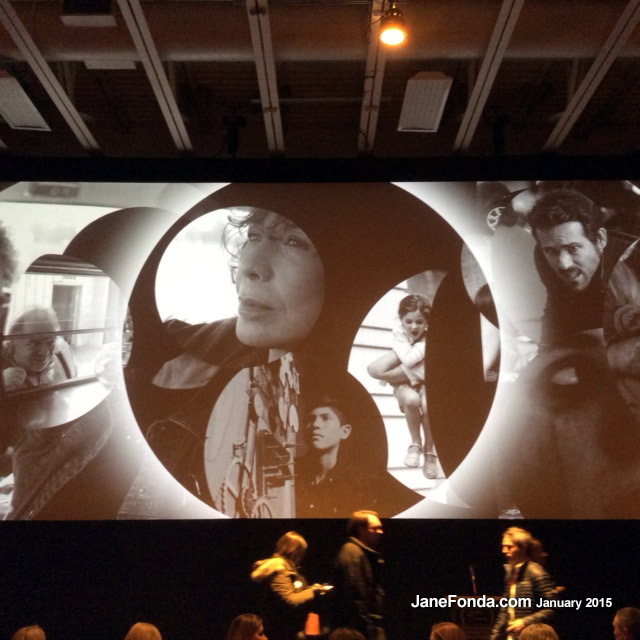 Monday night Lily and I joined Pat (Mitchell) and her friends and drove into Salt Lake City for a performance of Sibylle Szaggars Redford’s show “The Way of the Rain.” It was a multi-disciplinary experience –Bylle’s paintings projected onto silk panels, music, dance and the spoken word (performed by Bylle’s husband, Bob Redford). In all, it was a powerful, poetic work about climate change. The photo below doesn’t begin to capture what it was like. The abstract images projected onto the silk panels were constantly changing. Bob told me later that Bylle let the New Mexico rains fall on her paintings which is what created the moving, mystical images. 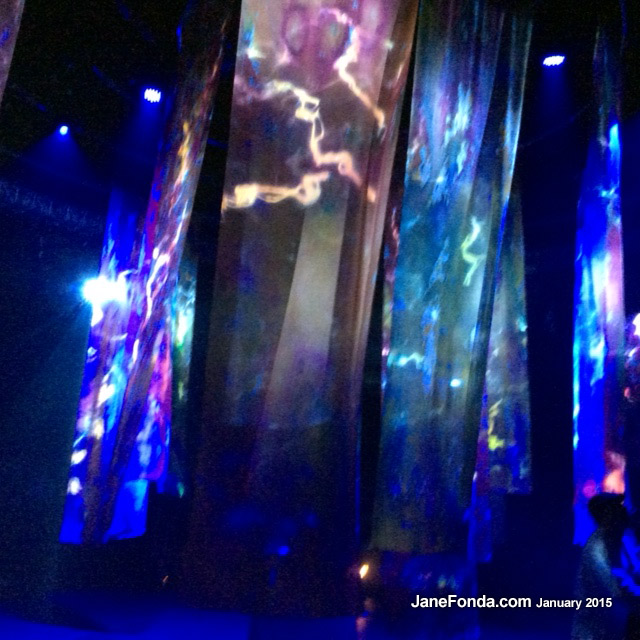 When the performance was over, everyone came onto the circular stage. That’s Bob in white. 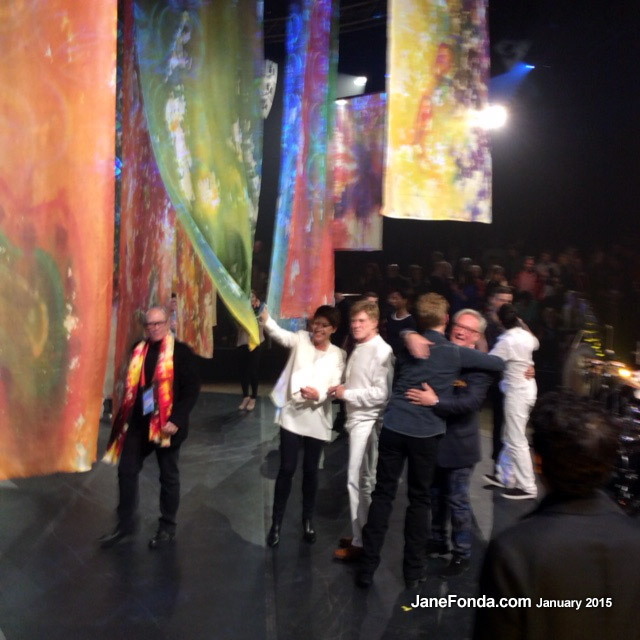 Lily and I sitting with Bronwyn Varty from South Africa. 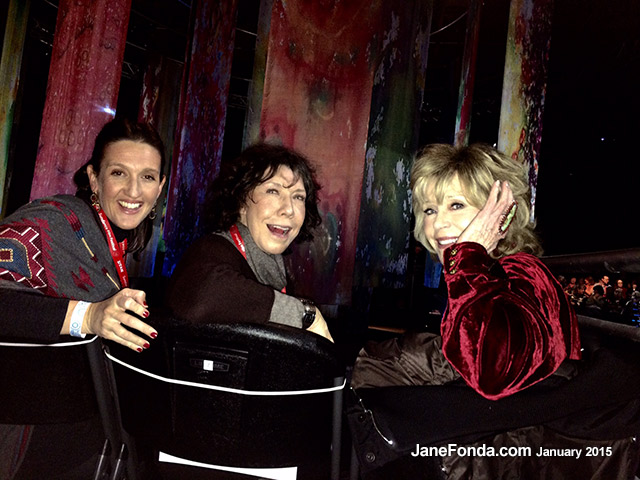 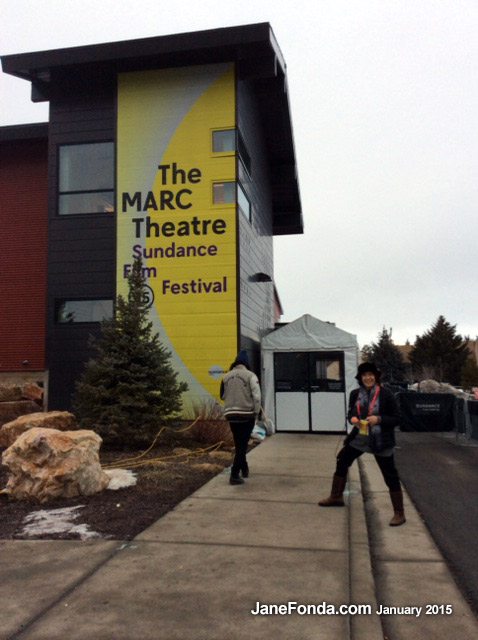 The Egyptian Theatre was the sole place where films were shown when the festival first began! 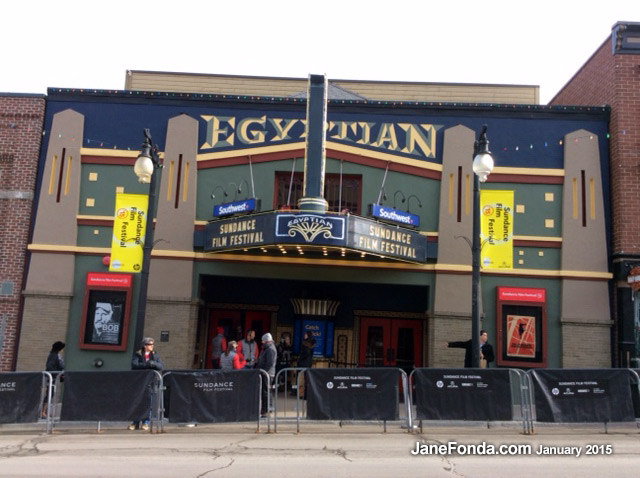 We almost missed the documentary at the Egyptian, “Listen To Me, Marlon,” because we stopped at a main street deli to grab a bite. Here’s Lily yelling at me to slow up. Running up hill at 8,ooo+ feet isn’t easy. It was an interesting but sad documentary. He was so gorgeous, so gifted but his demons clearly caught up to him. His family came from Omaha like my father’s and Marlon’s mother was responsible for getting my father into acting. I knew him fairly well. He had a profound influence on me in the late ’60s, early ’70s when he became an activist for Native Americans rights and the Black Panthers. 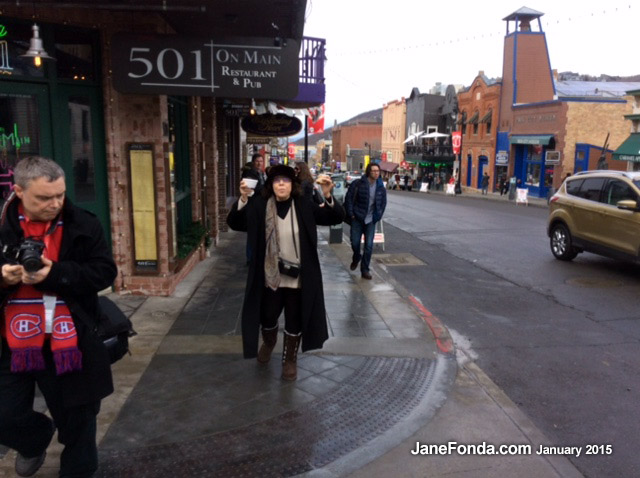 But the truth is, the reason we almost missed the Brando documentary was because we stopped by the building that housed New Frontiers, the displays of all the new, virtual technology that have become an important part of the festival. We got a taste the previous night when we went for sushi and ran into a group that is promoting the virtual glasses 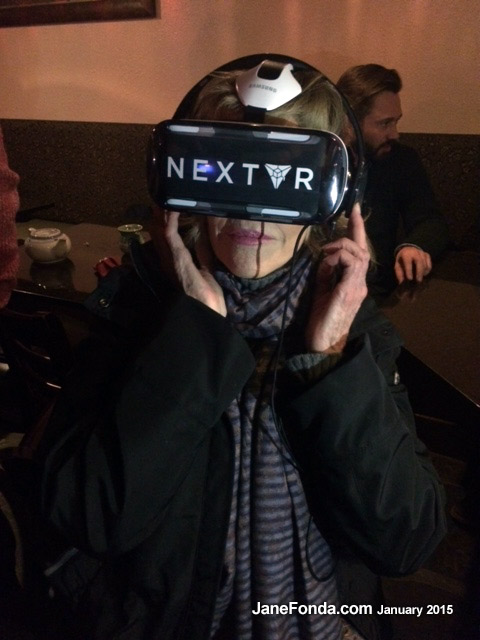 Looking into these glasses I could turn in all directions and there I was on Pfeiffer Beach in Big Sur and then overlooking the Golden Gate Bridge.

Up on the 3rd floor of New Frontier, there was a mysterious, otherworldly vibe

Lily tried her hand on the flying machine. She didn’t flap her arms nearly as much as other people. Well, neither did the guy in the previous video but some really flapped away:

This is what she was seeing–flying over skyscrapers. 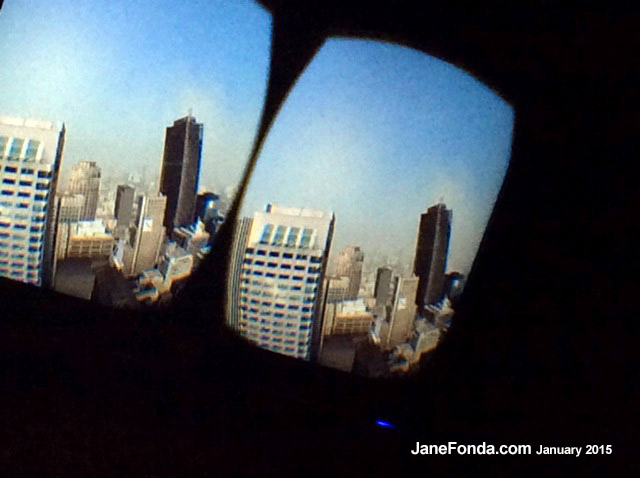 Going into the Eccles Theatre to see “I’ll See You In My Dreams,” starring Blythe Danner and Sam Elliot. A charming movie that finally gives Blythe a showcase as well as a host of other fine talents and some wonderful scenes with women together, enjoying each other. 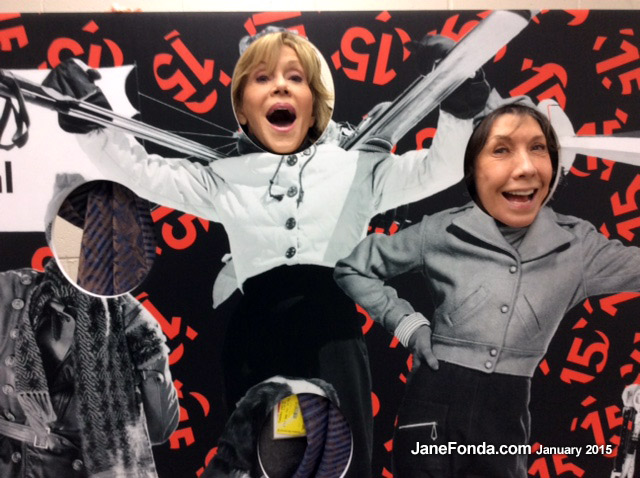 The director, Brett Hal, on stage with the cast. I saw Sam Elliott in 3 films this year at Sundance and it was just wonderful to be reminded what a fine actor he is. 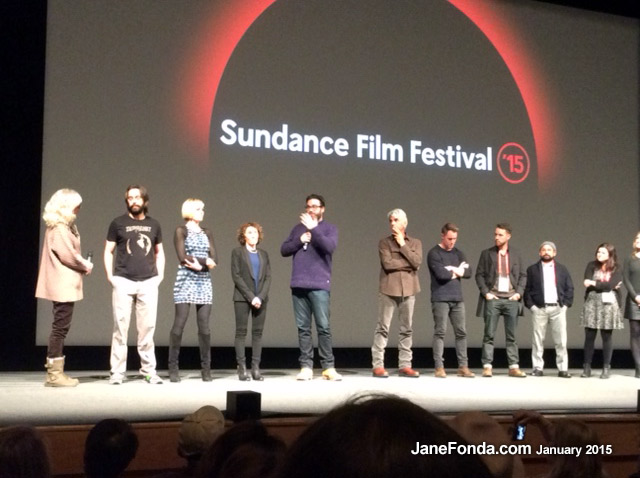 In the bathroom after one of the screenings we met crystal Moselle, director of the award winning documentary ” The Wolfpack” (next to me) and Izabela Tzenkova, one of the producers. “The Wolfpack” was a fascinating documentary about 7 brothers who were locked away from the world in their lower East Side Manhattan apartment and learned about the outside world by watching films and reenacting them. 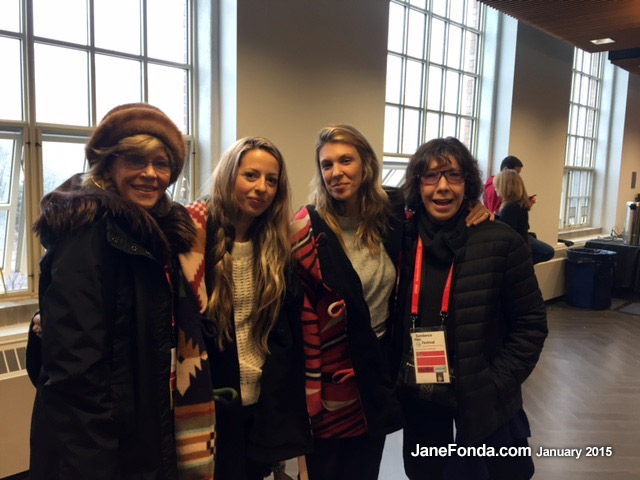 Lily and I went out to the Sundance Resort, 55 minutes from Park City, where we saw a comedy, “A Walk In The Woods,” starring Bob Redford and Nick Nolte. It’s about 2 old guys who decide to walk the Appalachian Trail. It was entertaining and I loved seeing Bob in a comedy. Then we had dinner with Pat and her husband Scott. 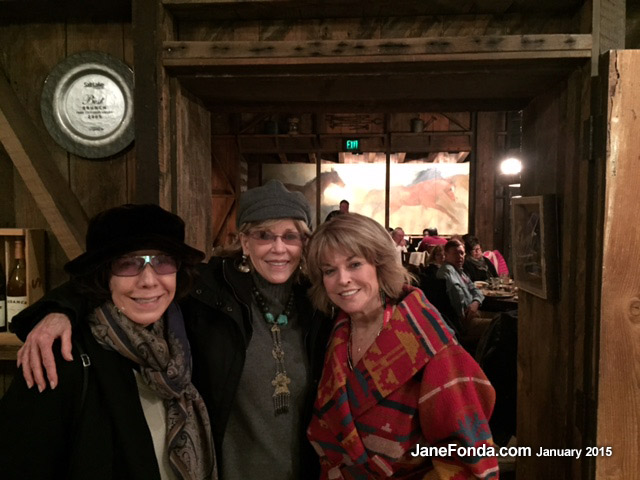 To conclude the adventure, there was Lily’s “Grandma,” which was my favorite film and I say this not because I love Lily but because I found it funny and poignant and, besides Lily’s perfect portrayal, there were a number of other outstanding performances: Sam Elliott, Marcia Gay Hardin and Laverne Cox. It was written and directed by Paul Weitz. Now there’s a director who cares about relationships and depicts them every bit as deeply as a woman director might. His mother is Susan Kohner with whom I attended elementary school. She was the prettiest girl there. We called her Conchita. An actor, she is best known for her role in “Imitation of Life.”

I very much enjoyed being behind the scenes with the press for this one. 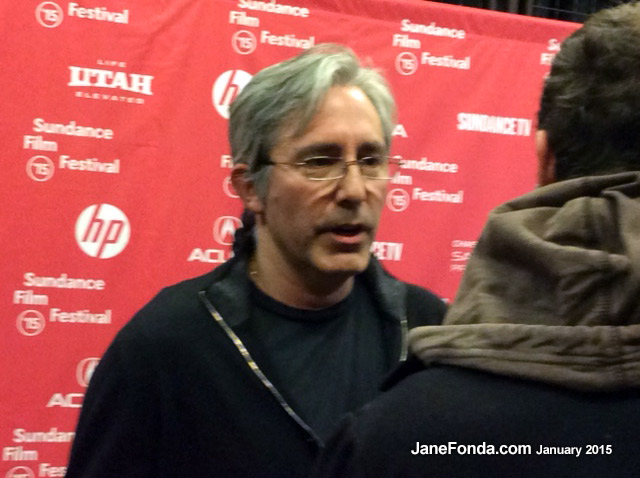 The wonderful new actor who played Lily’s granddaughter, Julia Garner. Keep an eye out for her rising star! 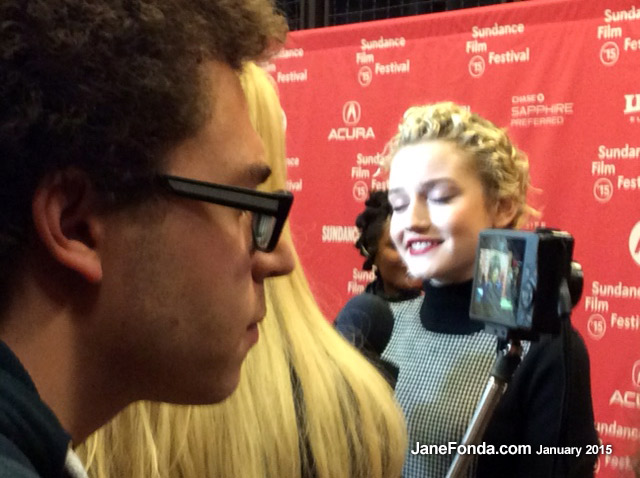 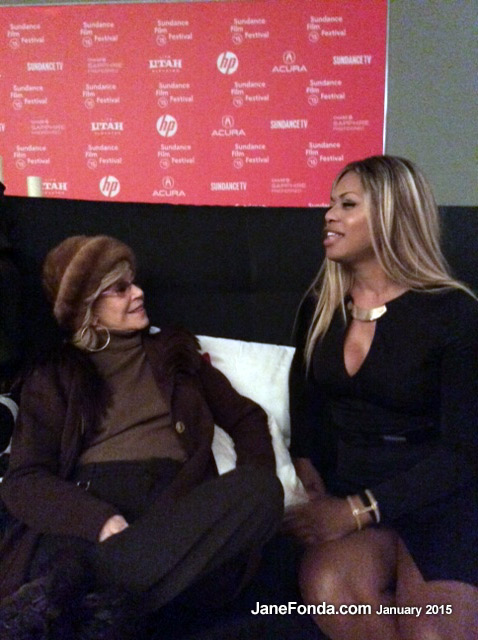 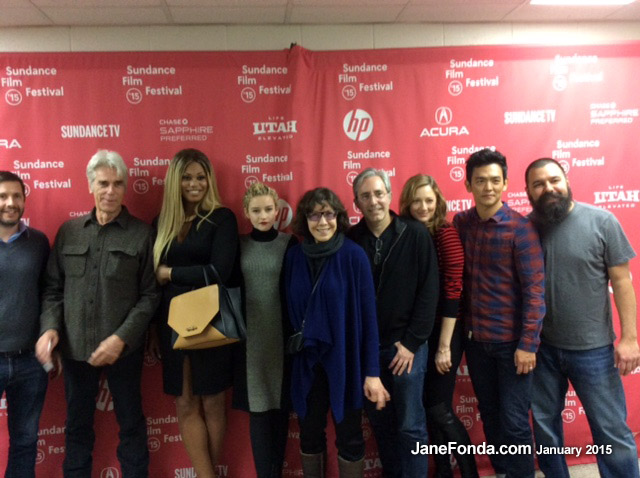 All in all, the six days were a blast. Next year I want to go for the entire festival. I didn’t see the film that won the Grand Jury Prize for Best Feature, “Me and Earl and the Dying Girl.” There were a lot of films we didn’t get to see. But both Lily and I noticed and enjoyed the fact that the days (and nights) seemed to move much slower…like summer used to when we were young. i guess that’s what happens when every 3 hours or so you disappear into someone else’s reality. One can get hooked.

So, hats off to Bob Redford for creating this showcase for the best of independent filmmaking and for creating workshops that mentor new filmmakers and to John Cooper who runs the festival and to Keri Puttnam for caring about women in films and nurturing the Sundance Institute and, last but far from least, thanks to the volunteers who made every moment at the festival a joy. Every one of them were friendly and helpful—and some even came from California. Oh, and thanks to Lily for being willing to hang with me.