This Sunday on HBO at 9pm, the final season of The Newsroom begins. There are only 6 episodes this season and I hope you watch them because Aaron Sorkin has outdone himself with the finale he has created. All the actors (and HBO execs) were on pins and needles wondering what he would come up with . . . especially given that he ended Season 2 with what could have been interpreted as a finale. In the last episode, he gave me an extended scene to die for and wraps up Leona’s and the newsroom’s dilemma in the most surprising way. But to ‘get’ it, you need to have seen all the previous 5. It’s worth it. And so moving!

Tuesday night there was a premiere of the first episode. I didn’t go because of work on “Grace & Frankie” but Sam Waterston went and the next day was ecstatic. “It was so well-paced and brilliant,” he told me on our set. 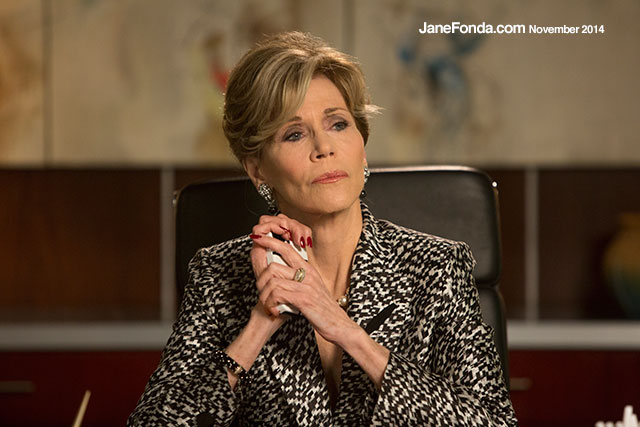 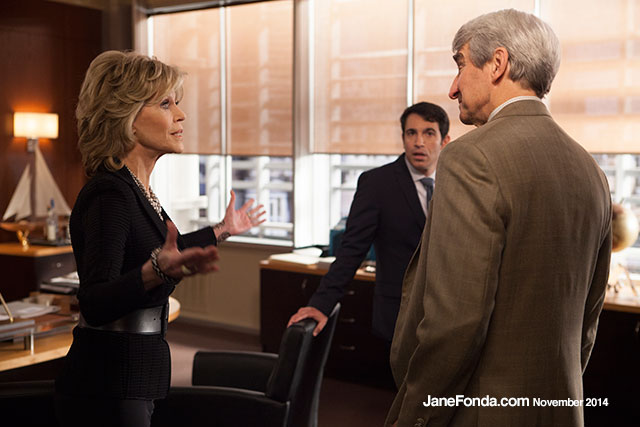 By the way, I must apologize for being silent so much these past months. I’ve been working some long hours on our Netflix series and when I’m not filming, I’m watching what we shot the day before on my iPad or learning lines for the next scene. No time to write or let my mind wander or read—all things I love to do so much. (I’m usually a 3-book-a-week gal). BUT, I prayed to have a TV series that was both funny and poignant and my prayers were answered in spades—and with Lily Tomlin as the icing on the cake. We have such a good time together. I wish I could say more, show more, of what’s up with Grace and Frankie and their soon-to-be ex-husbands played deliciously by Martin Sheen (mine) and Sam Waterston (Lily’s) but lets just say we laughed so hard during the last table read we were gasping.

Last week, on Halloween, I was at Paramount on the set. Our crew really got into the spirit.

Ashley, the set PA, standing in the door of the hair and makeup trailer. 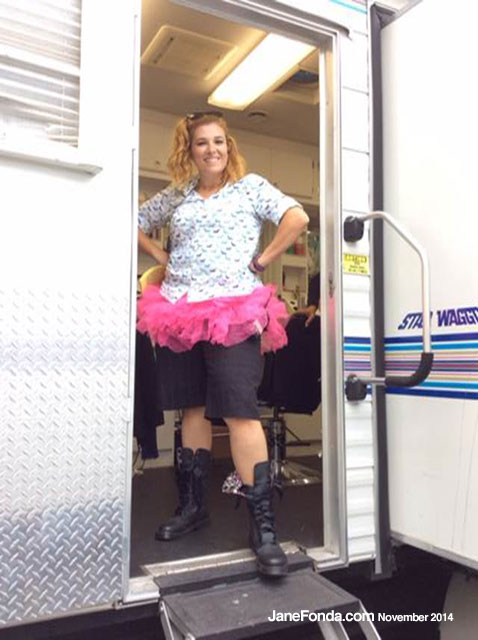 Lori Angelo and Cha Pucksanontachai from the costume dept 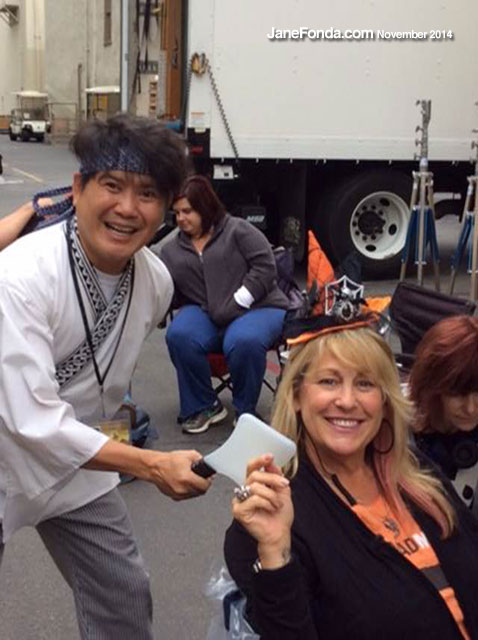 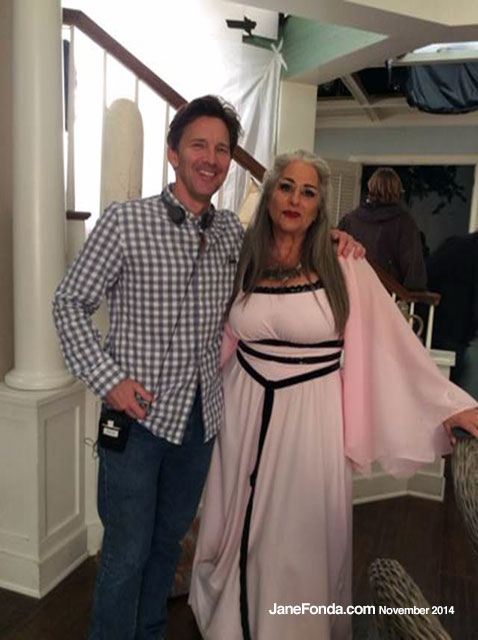 Andrew McCarthy (yes, THAT Andrew McCarthy, from “Pretty In Pink,” “The Breakfast Club,” etc etc) who is directing the current episode (love him) next to our fab show-runner, Marta Kaufman, dressed as Mortica 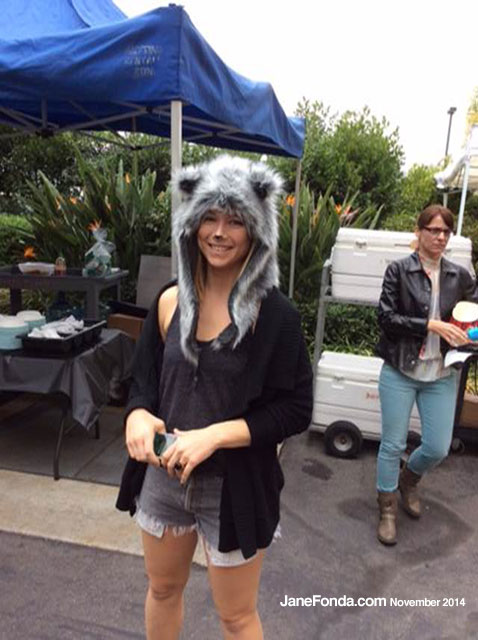 From left to right, the hair and makeup team dressed in straight jackets: Stephanie, Michele, me, Joy and Patti 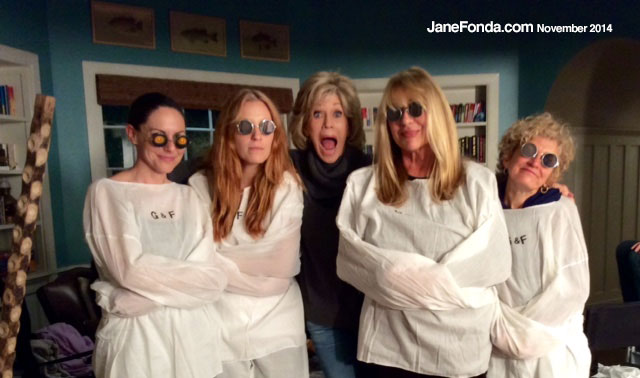 The inside of the hair and makeup trailer 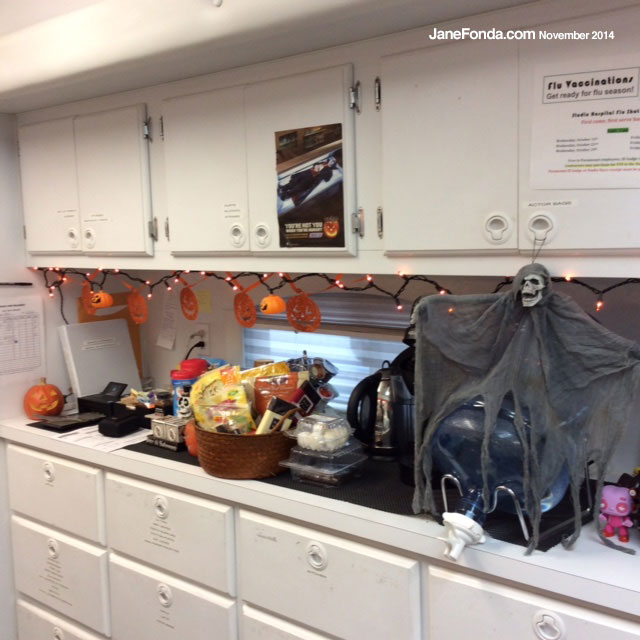 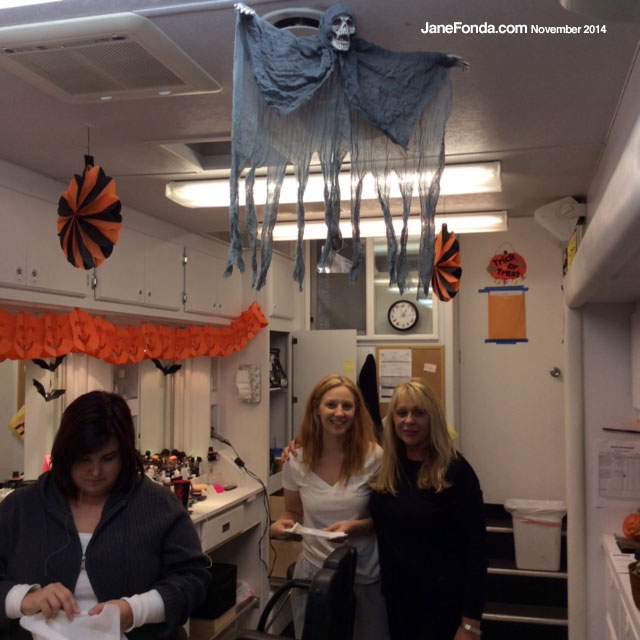 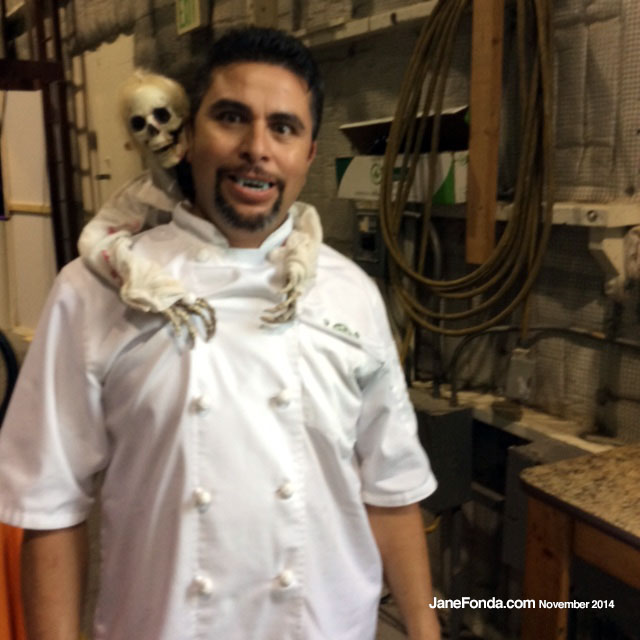 …and his terrific decorations on the buffet 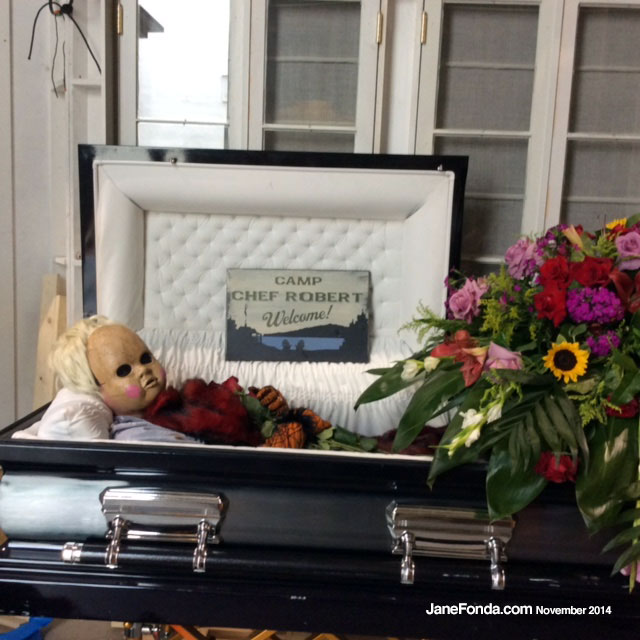 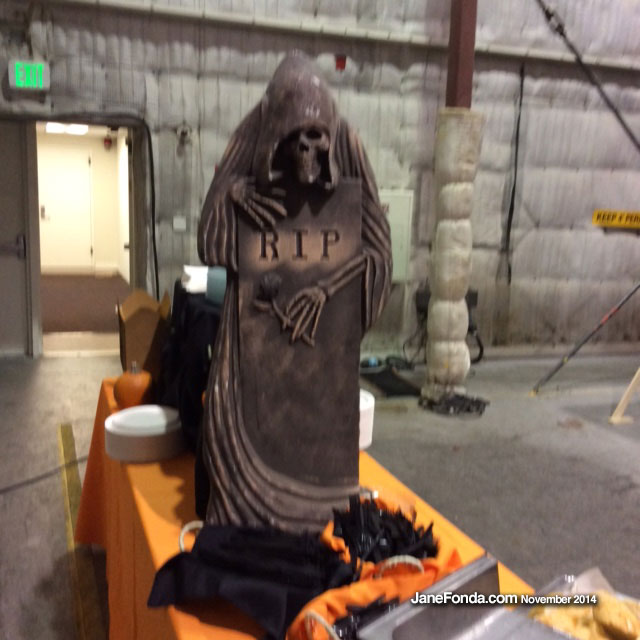 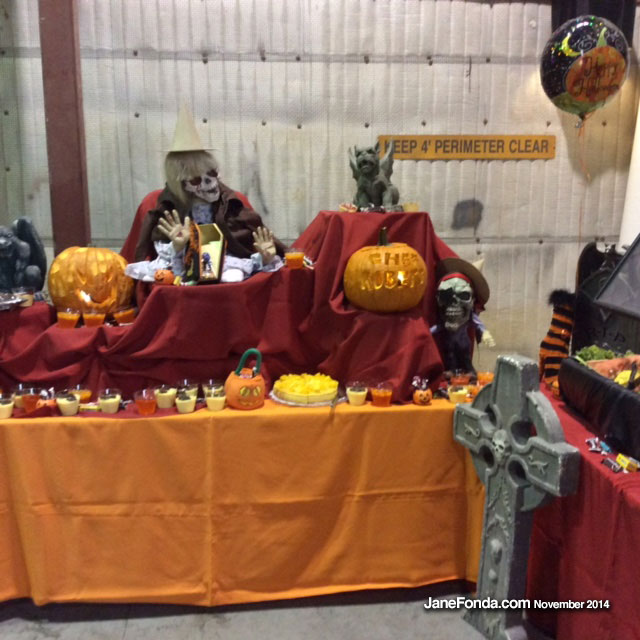 And I couldn’t resist these costumes I saw on the lot. This one is Freida Kahlo. Terrific, huh? 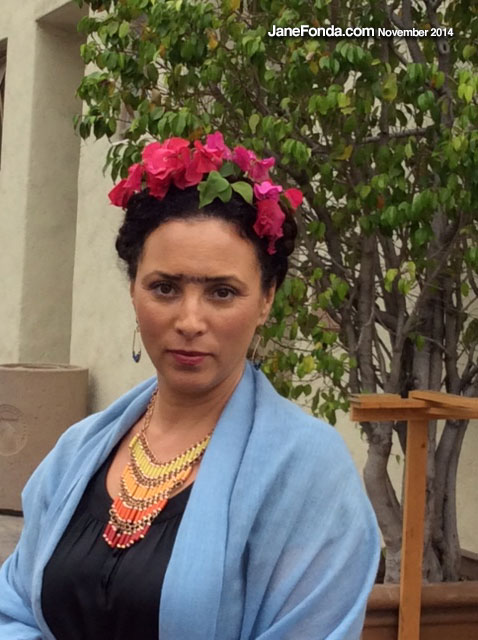 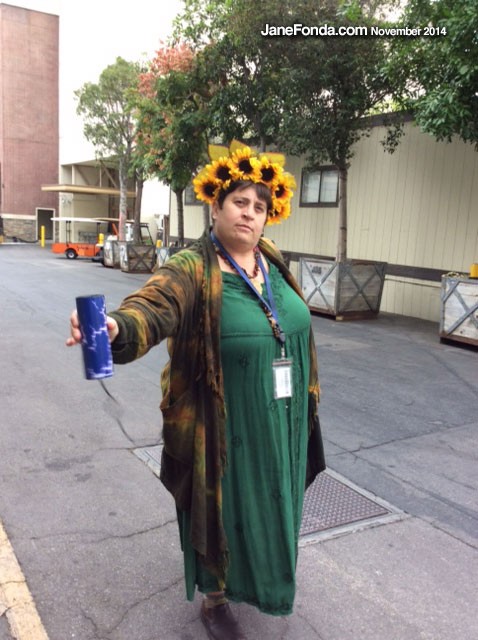 And, just for the heck of it, a “city street” on the studio lot. 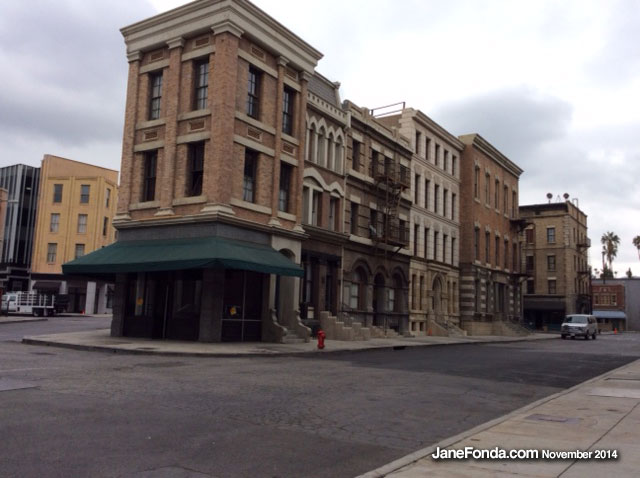 And beautiful Zoe Van Brunt on the camera crew 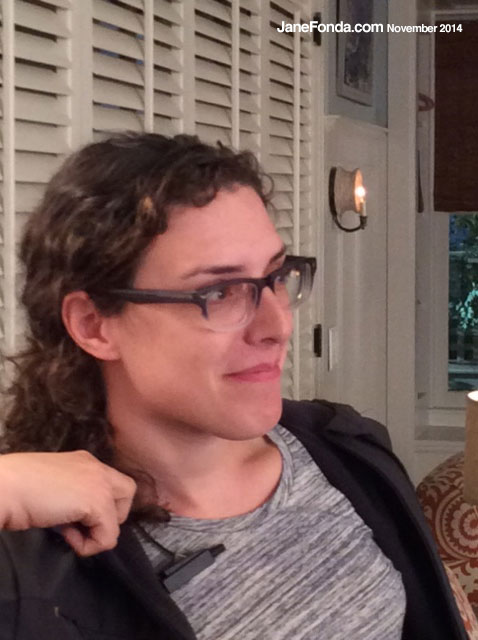 and, also beautiful Fame Hughes who looks after my costumes 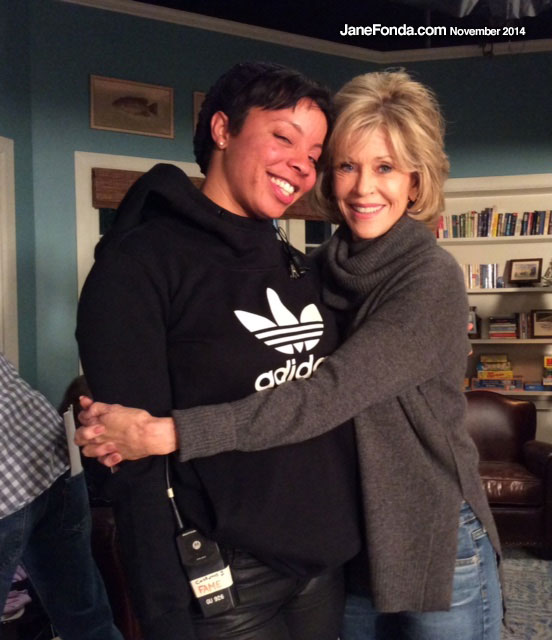 And I can’t resist sending you this photo of the pumpkin my son, Troy, carved. He has his grandfather Henry’s artistic bent. Dad would have been so proud of him. 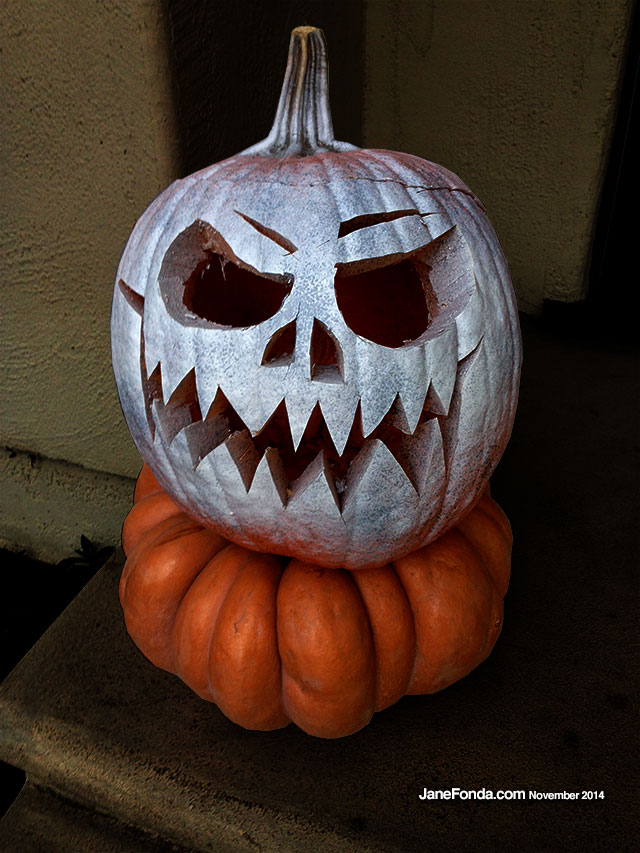 BTW, since I promised to update you on the reactions from my grandkids after they watched The Simpsons on Sunday (one of their favorite shows next to The Colbert Report): “Oh Grandma, it was so weird but, like, really cool to hear your voice coming out of that assemblywoman. But Mr. Burns is so creepy.” They also loved the subject of the episode since they know all about the dangers of contamination caused by fracking

I find it interesting that some of you who watched didn’t recognize my voice right away. I hope I can do more. I’ll try and be back soon.