We finished shooting at 2am last Saturday morning. Whew! It’s very nice to be able to sleep in and not have to learn pages of dialogue every day. It’s also bittersweet because I already miss my “Grace & Frankie” family, especially Lily. Towards the end of shooting on Saturday–like at midnight–she and I got onto a laughing jag that we couldn’t stop. Has that ever happened to you? It happened to me once with Robert Redford the last day of shooting “Electric Horseman.” I think it was a love scene and we became hysterical. Sidney Pollack got upset. Dean Parisot was directing this last “G&F” episode and he didn’t get mad but I could see concern on his face because it was so late and the crew was tired. The scene was one in which I was following Lily out of the living room, desperate not to be alone and she suddenly stops (so suddenly that I end up only inches away from her face) and she asks if I want her to blow some of her courage into my mouth. Every time we’d be staring at each other so close up we’d start laughing. I think it’s about releasing all the various emotions that had built up over finishing the season.

I have to say I’ll also miss Martin Sheen and Sam Waterston, both of whom are really special people, fascinating to talk to and watch work. I had my only scene alone with Sam (he plays Frankie’s husband) last week in the final episode and it was such a pleasure watching him create his character of “Sol.” He’s a man of range and depth, humor and perspective. Martin has more fun, interesting stories than anyone I’ve ever met and, maybe cause he’s part (very) Irish, he recounts them often and joyfully—usually not the same stories. He’d come–no, burst– into the makeup trailer every day pronouncing “Blessings on one and all, including the undeserving—and you know who you are!” If there’s a roomful of extras in a scene, Martin will very likely talk to each and every one. What a joy for life he has and he sprinkles it all around him with generous abandon. Now that The Newsroom has begun its 3rd season, it’s such fun to watch Sam as “Charlie” who runs the newsroom with whom my character, Leona, interacts the most (because I’m his boss!). What pleasure to see him so very different than he is in G&F.

Marta Kaufman, G&F’s showrunner and, for those who don’t know, the co-creator of “Friends,” hosted the wrap party Saturday night. It was a really fun party though it wasn’t easy to recognize everyone all cleaned and duded up. What a nice group of people. Marta’s a great, generous person and host. The ‘gag reel,’ edited by Marta’s daughter Hannah, was really funny and the music was good though all I did was watch Sam dance with Lynn, his wife. I was too tired to move that much. In fact, It’s been 3 days since we wrapped and I’m still brain dead. I took a 3-hour nap Saturday and fell asleep while meditating in Sunday.

I must say that, despite the incredibly long hours, I managed to meditate most days over the last 4 months and it was life-saving. As I think I’ve mentioned in previous blogs about the series (though I’m not sure of anything right now!), shooting a series was a steep learning curve for me and I went through a sort of existential crisis. Meditating kept me somewhat centered and I’m so glad and grateful that I went to the Upaya Zen Center in Santa Fe 7 or so years ago for the 8-day, silent formal Zen Buddhist meditation known as Rohatsu. That is basically where I FINALLY learned to meditate and it done much to keep me sane.

Here are some random pictures from the last week or so. 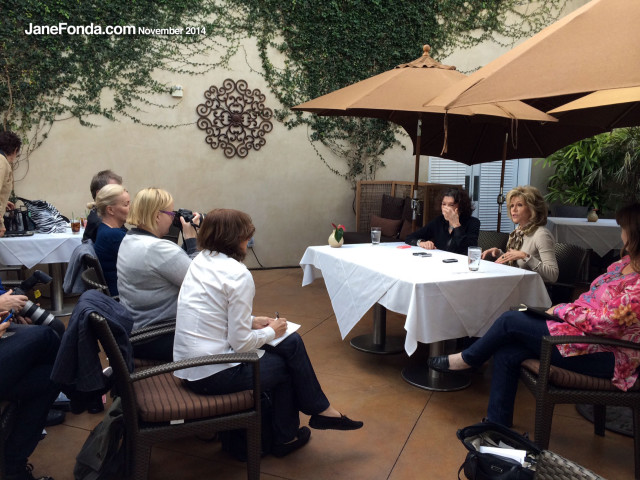 Here we are with group of HFPA journalists who came to watch one of the scenes and do a press conference. I always enjoy seeing their familiar faces. 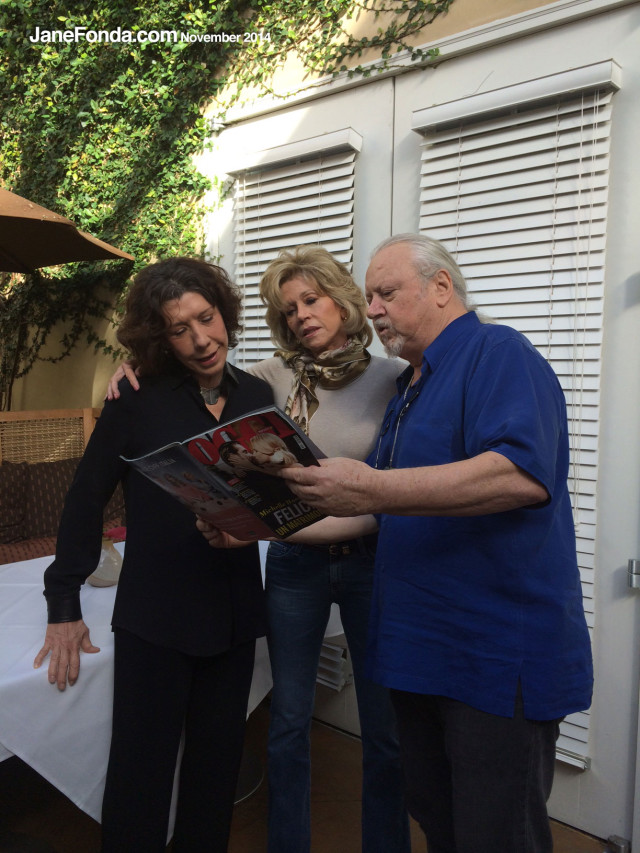 I love doing interviews with Lily. She’s such a hoot and so wise. 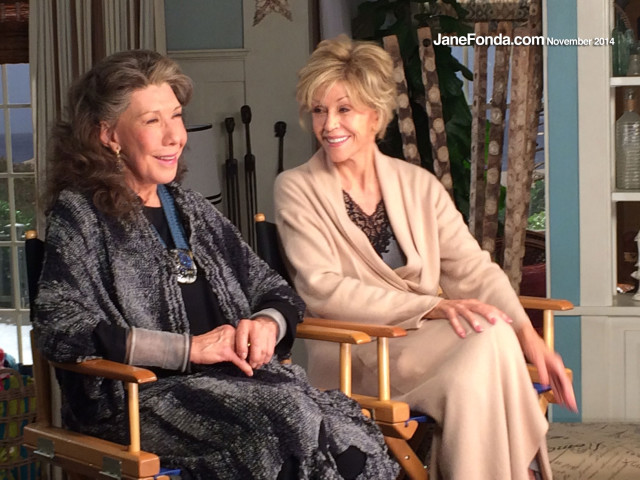 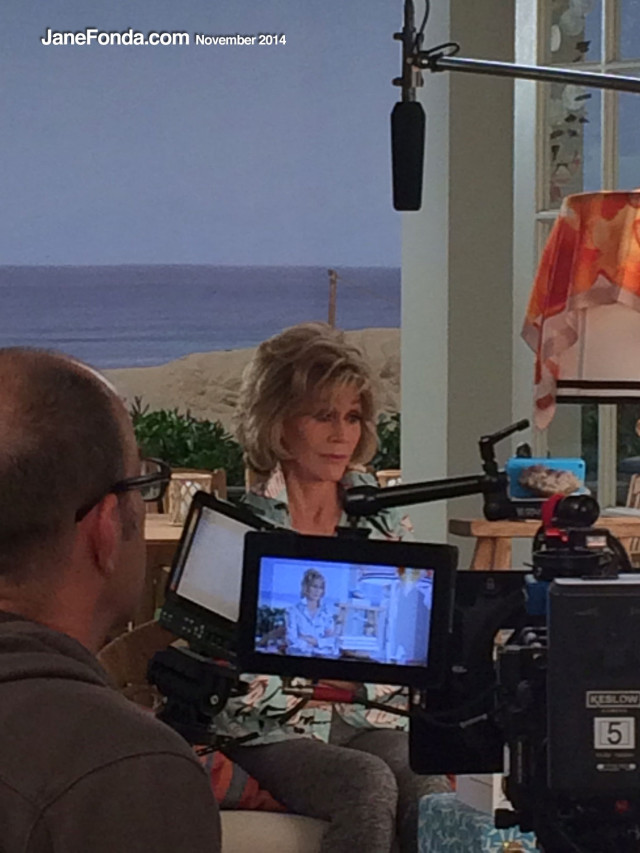 Scene sleeping on the couch when the boyfriend I thought I’d broken up with is sleeping upstairs in my bed. 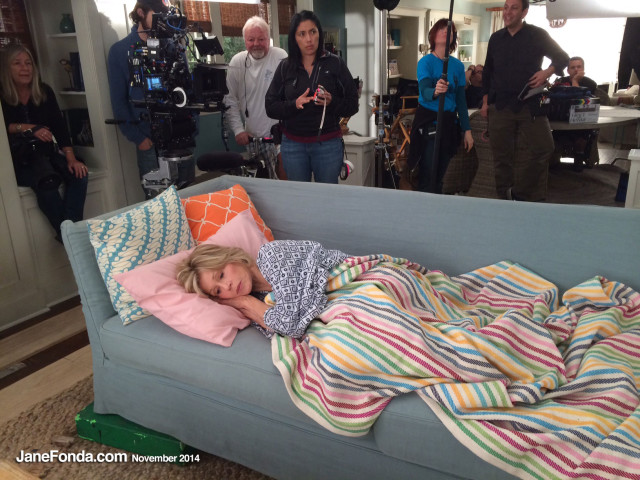 Leaving the sound stage last Saturday at 2am. 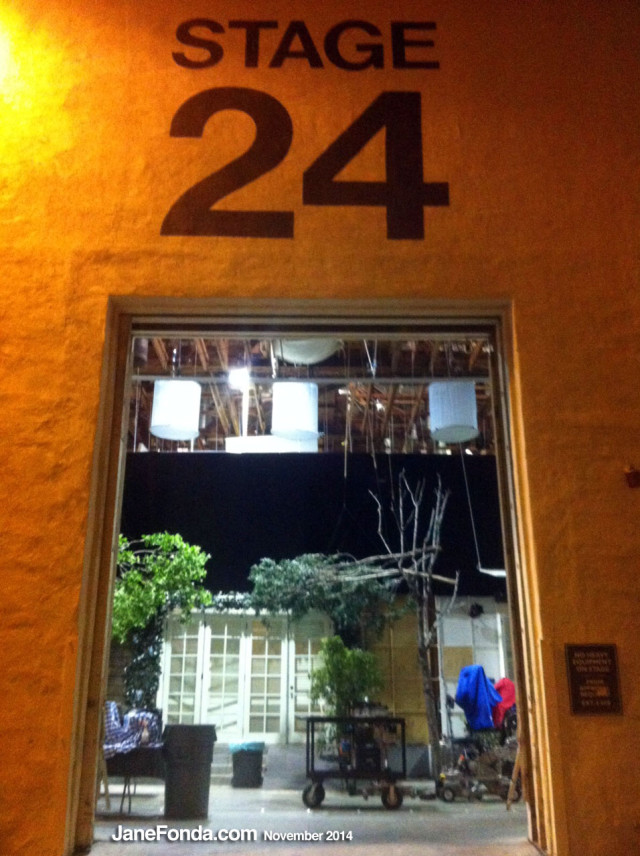 I’m not going to be with my children for either Thanksgiving or Christmas.

My daughter has moved with the grandkids to Vermont, and in a few weeks I’ll visit them. In the meantime I’ll be doing all sorts of interesting things along the East Coast.