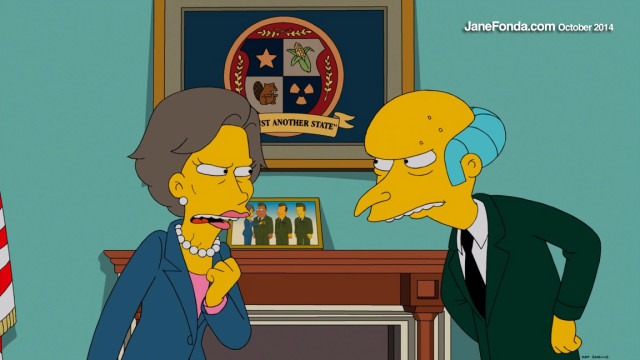 Happy Halloween! I’ve been working a lot which is great, and I will fill you in via my upcoming blogs, but today wanted to let you know that this coming Sunday, Nov 2nd, I will be on The Simpsons! Last January I was invited to be the voice of Democratic Assemblywoman, Maxine Lombard who is secretly Mr. Burns’ girlfriend, a most unlikely pairing as you’ll see when you watch, and a fact that horrified my grandchildren. “No, Grandma, it can’t be! You’re not Mr. Burns’ girlfriend.” I loved it. I rarely get that much reaction from them when it comes to my work.

I had never voiced an animated character before and had always dreamed of doing it so you can imagine how excited I was at the prospect. I mean, THE SIMPSONS!

Here I am (below) with with Executive Producer Matt Selman and Producer/Writer Carolyn Omine in the recording studio on the 21st Century Fox Studio lot. 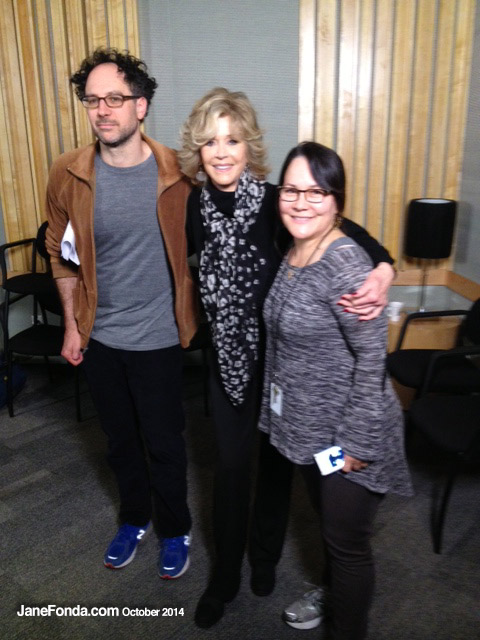 21st Century Fox—-that’s hard for me to write since I have a long history with the 20th Century version of the studio. My dad was under contract to Fox when he made many movies in the 30’s and 40s and I remember visiting him as a child on the lot when what is now the sky-scrapered Century City was the Fox Studio back lot with a gigantic cyclorama of sky (“Grapes of Wrath” may have been filmed against that “sky”–the scene with the preacher and Tom Joad–) and fake small town streets and western store fronts.

I made “9 to 5” on the Fox lot in 1980 and had an office there. So coming onto the newest iteration of the studio was fascinating. It’s a gorgeous studio, I must say, and there’s still the old city “streets” where tours are a regular presence now.

It was a blast voicing Maxine Lombard. I did it without seeing the animation. I guess that’s how it’s usually done — the artists do the animation after the voice is recorded. There was just a script and the director, writer, producer in a big recording studio with me, making sure I did it right. The episode is called “Opposites A Frack”, tune in to see why, this Sunday evening 8:00-8:30 PM ET/PT). I hope you’ll watch and let me know what you think. I will let you know what the Grandkids say.

After the recording, I asked to be taken on a tour of The Simpsons offices. Here’s a peek behind the curtain. 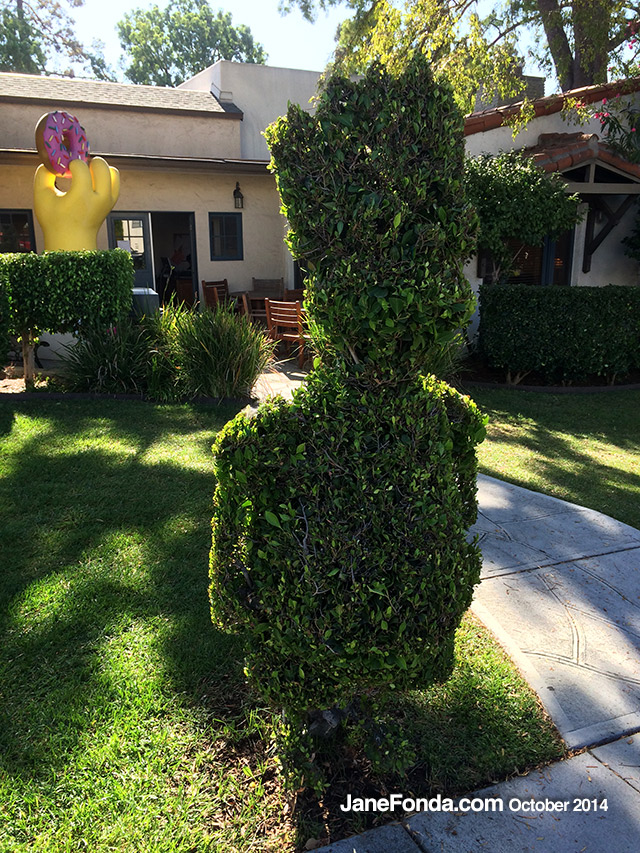 Outside is a Bart topiary and, behind that, you and see Homer’s hand. 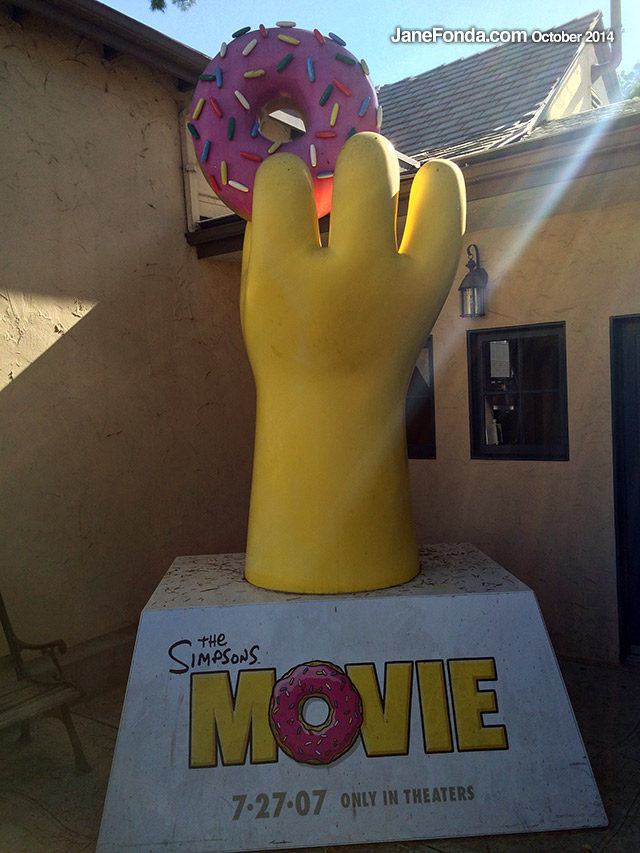 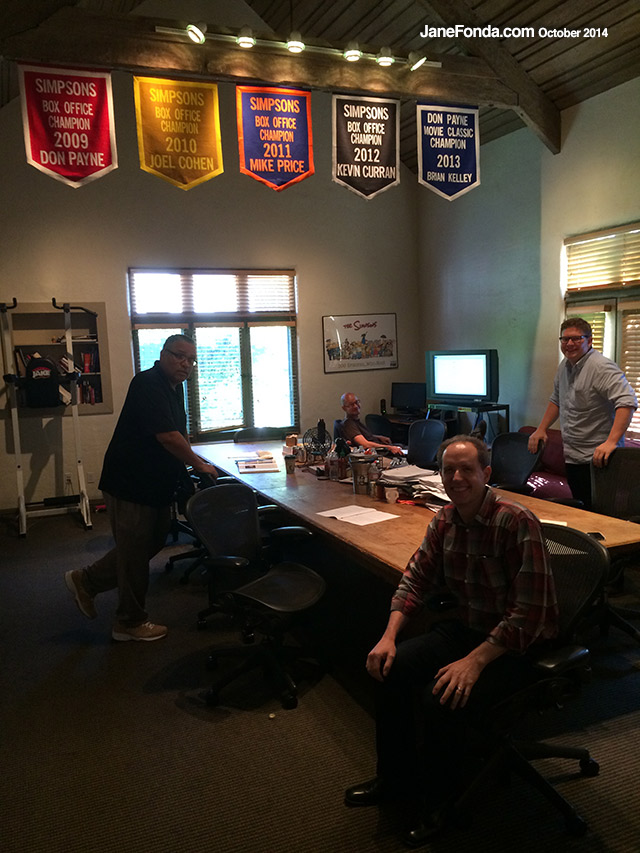 This is one of the writers’ rooms. 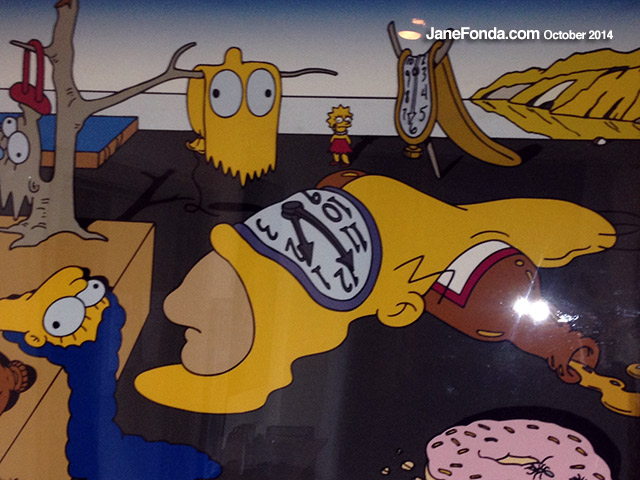