I was very excited when Martin Sheen was cast as my husband and Sam Waterston as Lily’s. It feels good to have my pal from “The Newsroom” with us on this new adventure. Most of my Newsroom scenes were with him and I grew to care for him a lot. I’ve never worked with Martin before but we’ve met on several occasions and we share values and concerns…actually, all four of us do. Another thing we all have in common is Aaron Sorkin. Between “West Wing” and “The Newsroom” we’ve all worked for him.

We began shooting “Grace & Frankie” two weeks ago. We begin the 2nd episode next week. I had a brief hard spell the first day, moving away from my Leona Lansing-Newsroom mode and into comedy. Comedy requires different muscles, a subtle shifting of gears, of attitude. It’s harder, in my opinion. This kind of comedy has to be real, the comedy has to come out of reality, out of pain, yet it has to be funny. I was worried about the dosing, frankly, but when I saw the dailies the next day I felt relieved. It WAS funny AND real. Just that bit of reassurance made everything else last week much easier and more fun. In fact, I’m thinking that I’m more relaxed and playful at work than I used to be. Maybe I’m fooling myself. It’s always an up-and-down thing…one day I feel terrifically confident and the next I think they should fire me. I wonder what percentage of actors are like this. Probably most. That’s why acting is good for the heart (fosters empathy) and hard on the nerves (when will they wish they’d never hired me?). But I do feel an important shift toward lightness in some deep part of myself and that’s a pretty terrific thing to feel at my age when traditional thinking says you are what you’ve become and that’s that. I left the acting business when I turned 50 because I was too unhappy and tense to feel capable of acting. How things can change! But, then again, I’ve worked hard for change and it feels good to see it has paid off on so many levels.

One of the great things about being older is the been-there-done-that factor– you may feel scared or insecure but you remember other times when you’ve felt that way and things turned out just fine. You don’t make mountains out of mole hills. Instead it becomes easier to make lemons into lemonade. I’m much more aware of this because I’m working on a series. The day-to-dayness of it, the spread-outness of it makes it easier to notice that the troublesome mind-games one can bring to a task are your own sh– and you can’t blame them on anyone else. Also, because you know you’re in this for a pretty long hall (and, hopefully, a VERY long haul) you tend to breathe deeply and will yourself out of it. Despite the fact that the days are long and the pace is fast, there’s always tomorrow to do things better–differently.

Some actors don’t like to watch dailies (the footage you shot the day before). I, on the contrary, benefit from watching them, and not just the footage that I’m in. I’m one of the producers on this series and I need to see everything. Besides, it helps me calibrate my performance. These days, watching dailies isn’t the social experience it used to be where you’d all get together in a projection room with snacks and wine and watch together. Now, you’re sent a link which you watch on an iPad or computer. It’s more convenient but less fun.

The premise is truly funny and truly painful and when I watched the dailies of the opening scene with the four of us, it was laugh-out-loud hysterical, even unedited. It made me feel so excited about what we’re doing. 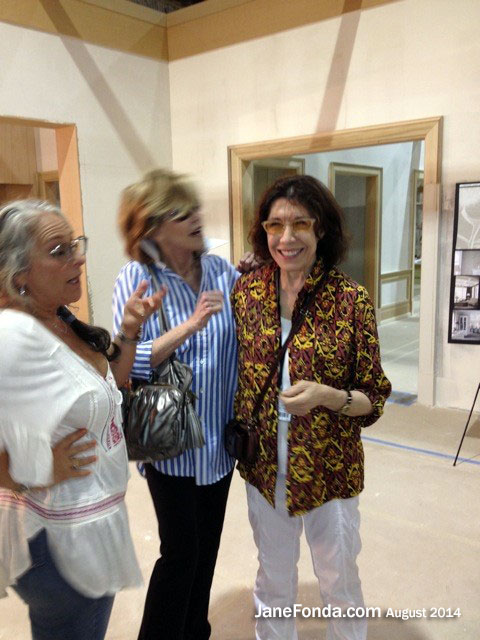 Marta Kaufman is to the left. She and Howard Morris are Executive Co-Producers as well as lead writers on the show. (Marta, BTW, was the creator of “Friends.”) 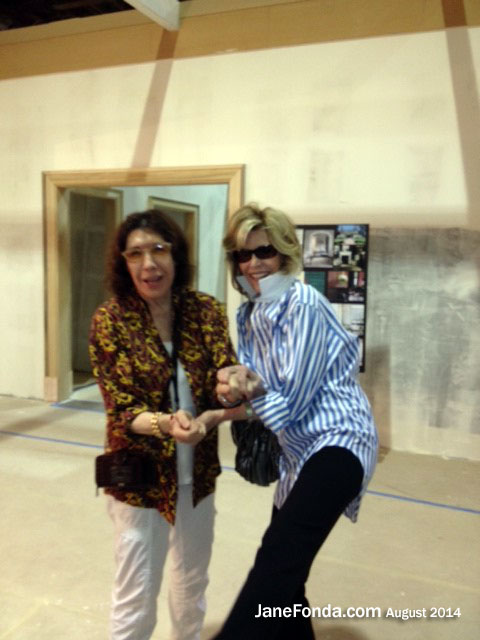 Me & Lily visiting the under-construction sets at Paramount Studios before filming began. 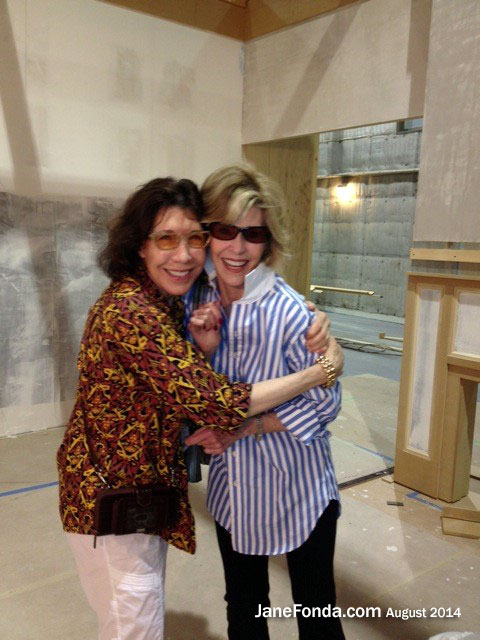 My BFF, Paula Weinstein is also one of the executive producers (she also produced “Monster-in-Law” and oversaw the filming of “9to5” in the early 80s) and Tate Taylor who directed “The Help” and the new hit “Get On Up!” (loved it!!!!) is directing the first and last episodes. Tate’s a southerner from Mississippi and an angel to work with… collaborative, full of ideas and fun.

As you may know, with Netflix you shoot 13 episodes and they’re all released at the same time. We will finish this season right before Thanksgiving. I don’t know when it will air. It’s a different animal when viewers can binge-watch the entire season over one weekend like I did with “House of Cards” and “Orange is the New Black.”

Quite apart from the creative aspects of it all, there’s nothing like having a steady job–at least steady for four months which is a lot different than doing a film in 28-30 days and then wondering where your next job will come from. There’s something reassuring, driving onto the Paramount lot every day, learning the names of the crew members and knowing there’ll be time to get to know them. 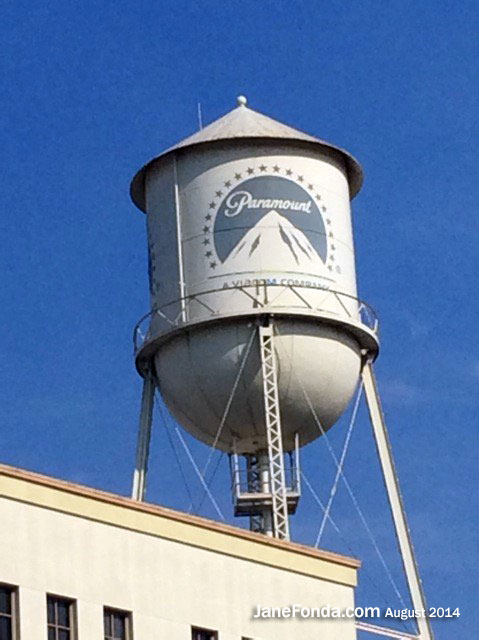 I loved being Leona Lansing but being a ‘Recurring Guest Star’ is hard because I’d drop down into the newsroom world every couple of episodes but couldn’t get into a real rhythm or get to know everyone. Now, I can bring my Nespresso coffee pot, my quilt for napping during lunch, my special round neck pillow (so my hair won’t be mushed) and ear plugs into my trailer, cause it’s MY trailer. And on weekends I don’t have to feel guilty for vegging out. 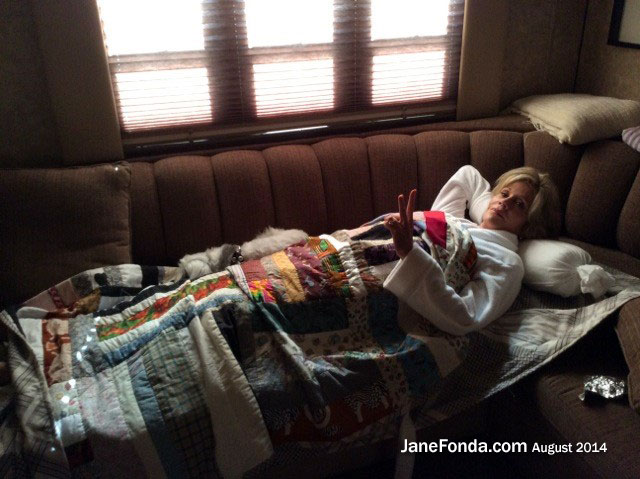 Debi Karolewski, my assistant, at her “desk” in my trailer. 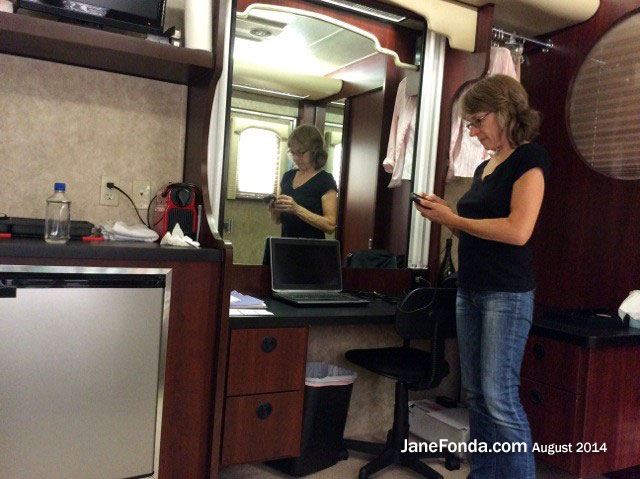 I’m not sure yet how much I am allowed to show of what we’re doing in the series, so, for now, I’ll just give you some glimpses of moments over the last 2 weeks. 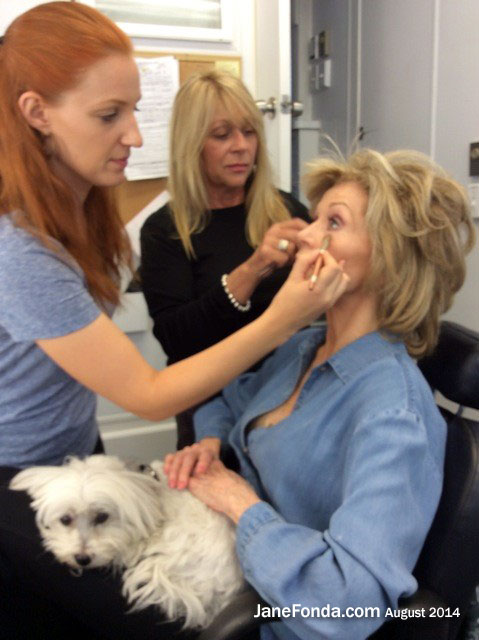 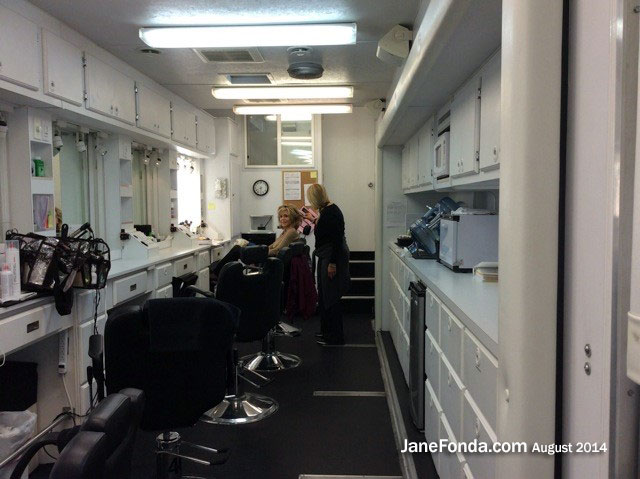 Getting fixed up by Michele Tyminski who does my makeup (the redhead) and Joy Zapata who does my hair (the blonde). Tulea is always in my lap during this process. This is a view of the entire hair & makeup trailer. Behind us you see a closed door. That’s where Lily get done. She likes her privacy, that one. 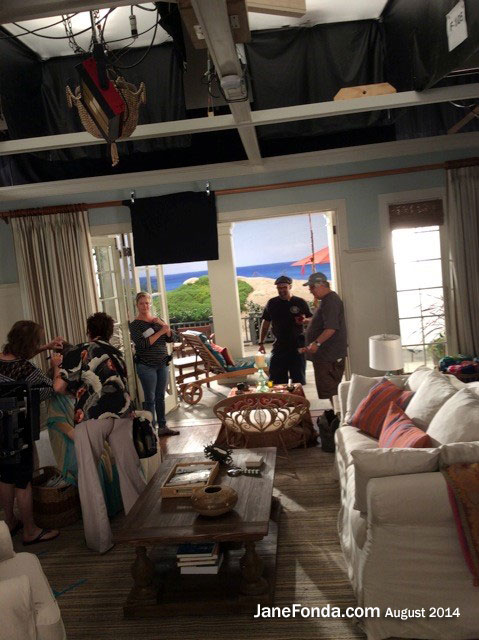 This is the set –a beach house–where many scenes will take place. 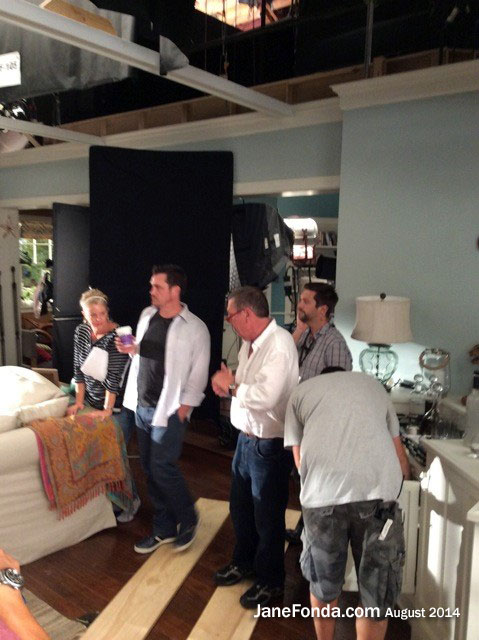 Left to right: Cleta Ellington, a longtime friend of Tate’s, also from Mississippi); Tate Taylor, our director and Gale Tattersall, our fantastic Director of Photography. 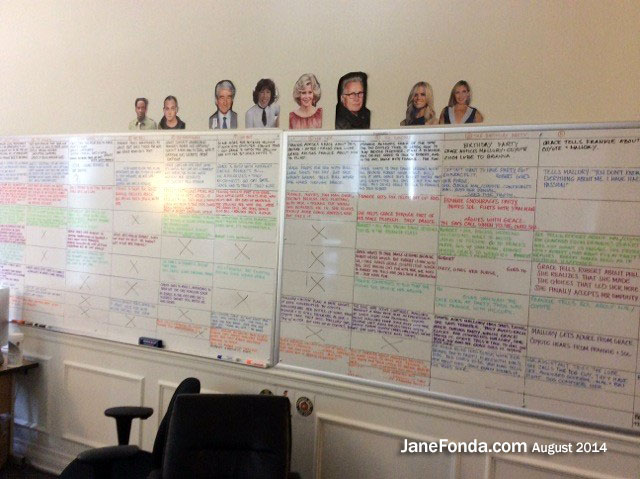 This is the wall in what is known as the “Writer’s Room” where the team of writers work on their various episodes and come up with ideas. The wall shows the story/character arcs for the entire 13 episodes. Believe it or not, I’ve been too busy to study the wall. There’s barely time to learn lines and watch dailies. 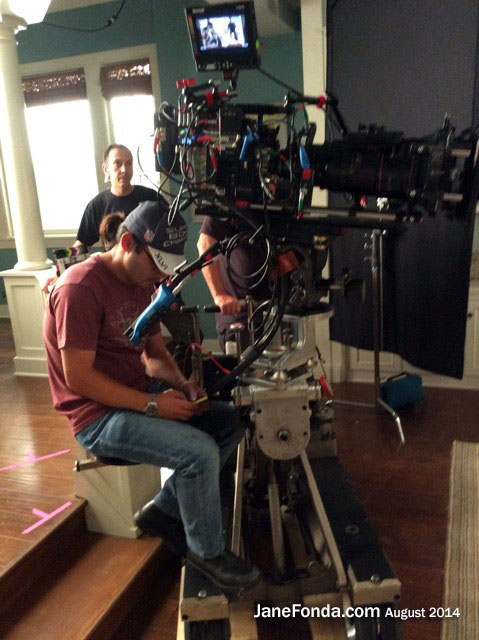 Hunched over the camera is Chris Murphy (AKA Murph). He was a camera operator on “The Newsroom” as well. 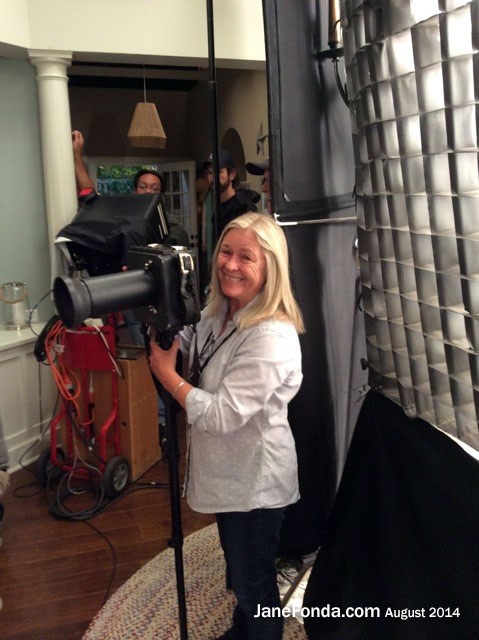 Above is our set photographer, Melissa Mosley. She also worked on “Newsroom” as well as on “Monster-in-Law.” 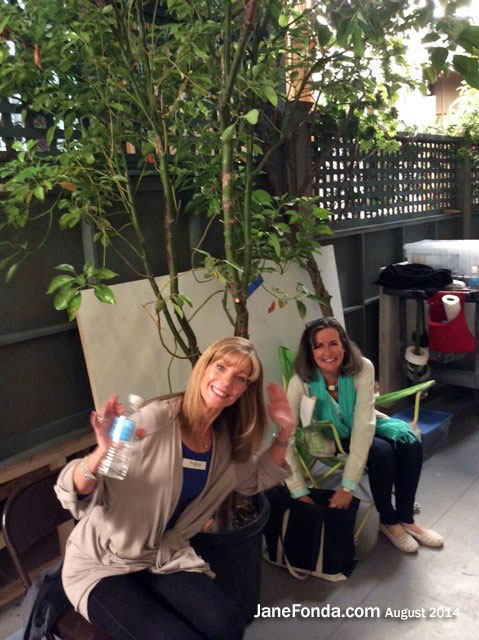 This is my stand-in, Maria, and behind her is Lily’s stand-in. Once rehearsals are over and tape marks have been placed on the floor indicating where the actor will be at various times during the scene, the stand-in replaces the actor while the Director of Photography sets the lighting and the actor gets made up and coifed. 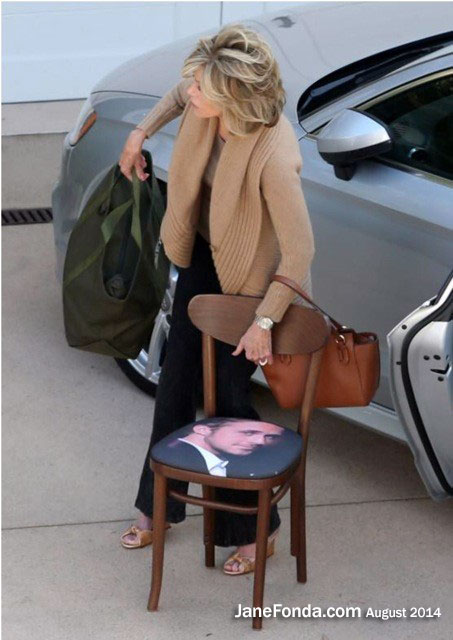 This chair featuring Ryan Gossling’s face on the seat, figures amusingly in the first episode. Some paparazzi watching the shooting from a cliff across the street posted this photo and the chair sold out over night. Go Ryan!

At the end of the first week Lily and I shot a long scene at the beach. Here we are being gotten ready. 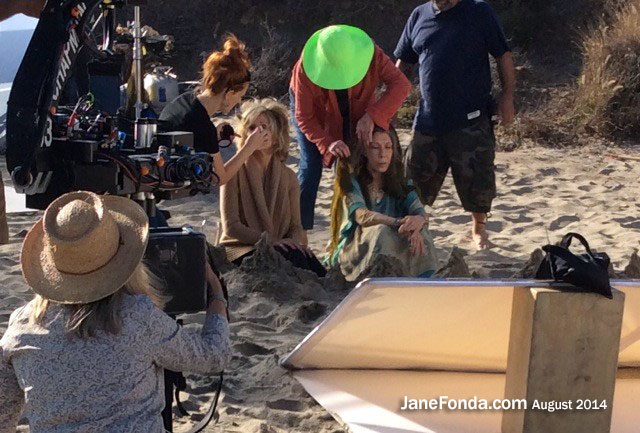 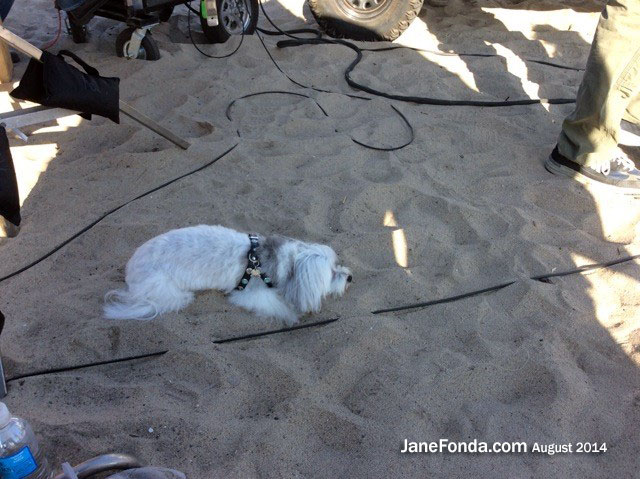 Us walking away in the end of the scene. 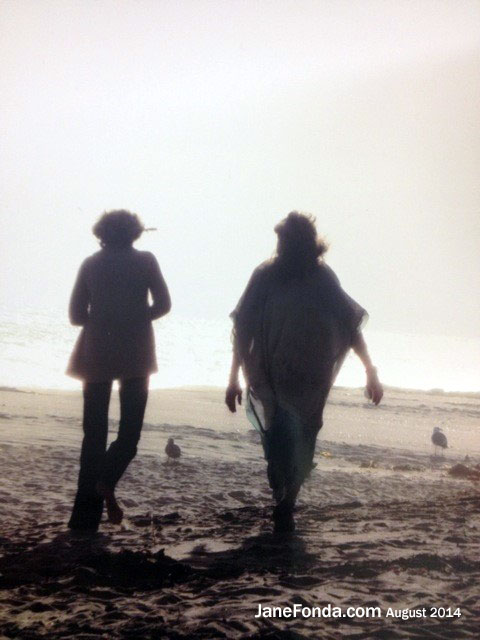 I’ll try to blog more often but can’t promise. There’s so little time. I wish I could also blog about what’s been happening in Ferguson, Missouri. It’s utterly mind-blowing what happened because citizens stood up to protest the murder of Michael Brown and President Obama, Attorney General Eric Holder, and many elected officials from both sides of the isle spoke out against the militarization of the police response so that the next evening there was freedom, harmony (more like jubilation!) and hope that, for once, justice might be done in the wake of a yet another killing of a black teenager. It felt like the 21st Century version of the ’60s –more responsive leaders and truly articulate African American locals that shone last night on MSNBC.

Share This Post
Previous ArticleGoldDerby.com: Jane Fonda is back in the Emmy derby — and this time she’s ‘stoned’ (and nice)Next ArticleHAVING FUN ON “GRACE & FRANKIE”
35 Comments