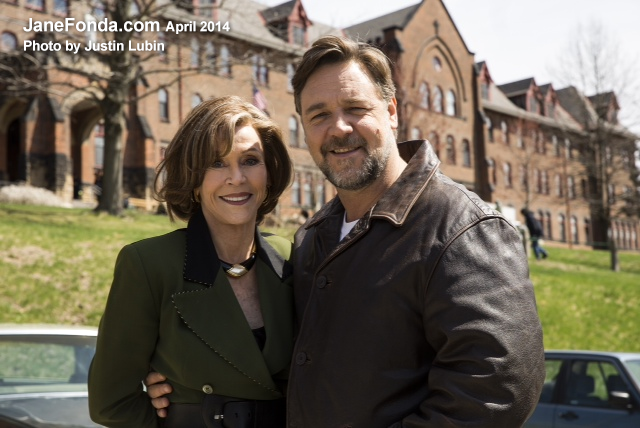 I’ve been in Pittsburgh this week working on a film called “Fathers & Daughters” with Russell Crowe. It’s an intense, moving story about a Pulitzer Prize winning author (Russell) who suffers from depression and is trying to raise his five-year-old daughter (whom he adores) alone because his wife was killed in a car accident. His sister-in-law (Diane Kruger) is trying to forcibly adopt the daughter because she feels he isn’t a fit father and she blames him for the accident that killed her sister. The young daughter is played by 10-year-old Kylie Rogers. Amanda Seyfried plays the daughter 25 years later, after her father has died, as she struggles to heal from the trauma of her childhood. My friend, Quvenzhané Wallis (“Beasts of the Southern Wild”) is also in the film as is Octavia Spencer (“The Help”). All my scenes take place in 1989 so, unfortunately, I didn’t get a chance to see or work with any of them.

The photo above was taken on my first day working with Russell. I play his friend and literary agent. I didn’t know what to expect and was excited and nervous. Was he going to be standoffish? Moody? Hard to work with? I needn’t have worried. First of all, he moved me to tears on a number of occasions during our scenes together. In our first scene, I’ve come to pick him up from a mental institution (above) where he’s spent the past year. He has a long walk down the sloping path to where I’m waiting and watching him as he approaches, his body language, the way he was all scooped out and sunken in on himself was astonishing– the way he found to embody a man just released from such a place after 12 months. Yet, in between takes, he was friendly, present and smart. OMG the man is smart and thoughtful. I had no idea. I guess I should have, because how do you wrap yourself around roles like the ones he played in “The Gladiator, “A Beautiful Mind” or, more recently, “Noah”, without a depth of intelligence? Watching Russell work these last days I was able to see up close that his gift is epic. He can be so subtle and at the same time, isn’t afraid of getting big. One minute he would be talking to me with a little boy’s charm and adorability and the next he’d have slipped to the depths of intensity and pain of his character.

We talked about a lot of things including my niece, Bridget, and my brother, both of whom he’s worked with.

Last Monday night, I went to see “Noah” with our director, Gabriele Muccino, his wife Angelica and two of our producers, Craig Flores and Sheryl Clark. I liked the film very much because it is so relevant today. Two opposing paradigms, the very same ones that are doing battle right now over the future of the planet, are starkly dramatized: One represents the belief that humankind has the right to plunder and destroy God’s creation for our own uses; that we are entitled to have “dominion over” all other sensate beings, animals and growing things. The other belief system, the one represented by Noah, holds that humankind has made a mess of things and that, if we are not stopped, the planet (God’s creation, after all) will be destroyed. I can think of no more important message to depict in a major film than this one and holding it all together in a way that makes the film work, is Russell. It’s a monumental responsibility and he fills it heroically. 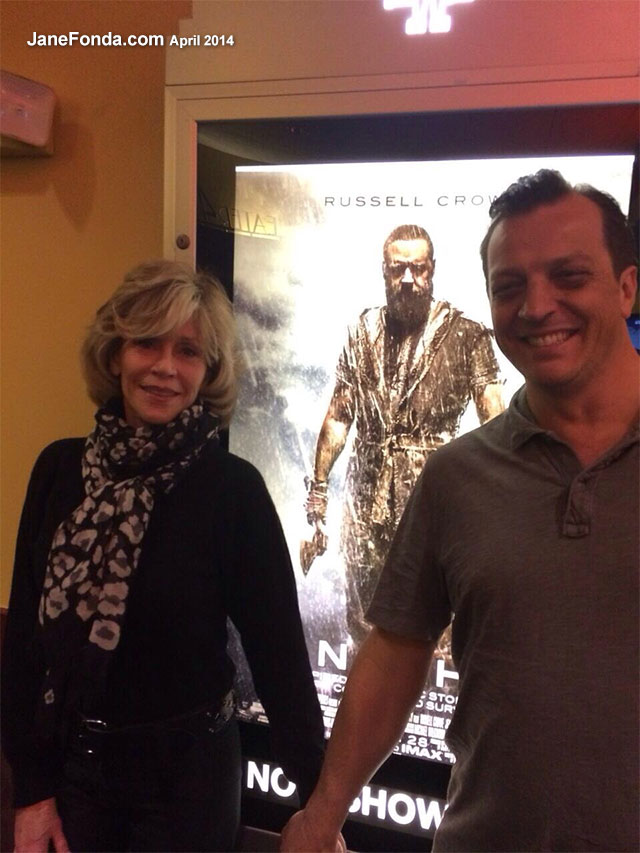 There’s a lot of parts to Russell: Besides being an actor, he is a director and owns a rugby team in Sydney Australia. It’s the team he grew up rooting for, the team that helped form him as a kid and he bought it when it wasn’t doing well because he felt it was important for the community, for young people like he was, to have a team worth rooting for. And talk about multi-tasking, he’s been traveling the world promoting “Noah,” editing an epic film he just finished directing, while creating the complex character he plays in “Fathers & Daughters.” Impressive. I hope that I’ll get a chance one day to work with him again.

Our Italian director, Gabriele Muccino, is impressive, too. He’s made “The Pursuit of Happyness” and “Seven Pounds” with Will Smith, among others films. Because I was coming into Pittsburgh, working for 4 days and then leaving, he did something surprising and lovely: he wrote a long letter giving me the whole back story of my character’s relationship with Russell’s character in the most generous, loving, touching words. On the set I found him very helpful and observant, always steering the scene where it needed to go emotionally.

Here’s a picture of him with me before a scene where I accept a Pulitzer Prize posthumously for my client (Russell). 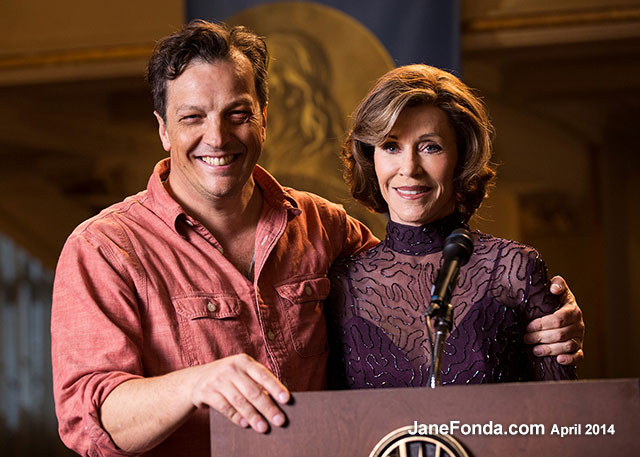 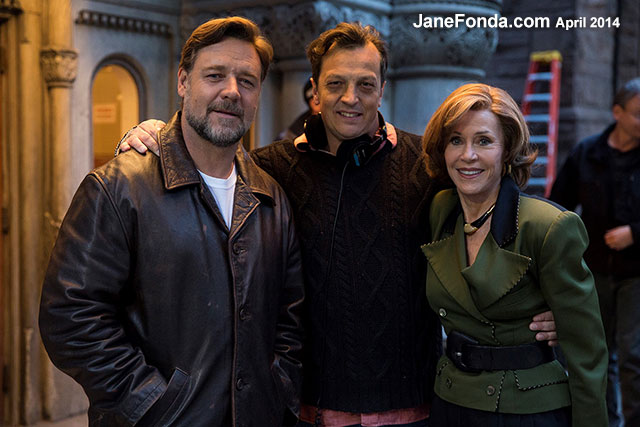 Photo by Justin Lubin of Russell, Gabriele and me

. . . and Gabriele and his wife, Angelica and their daughter, Penelope. 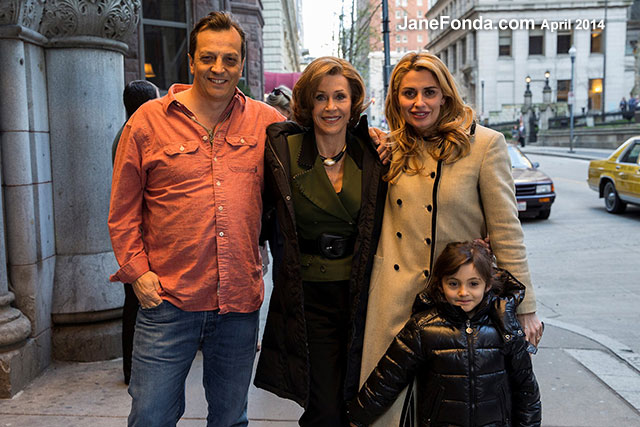 Then there’s Pittsburgh. I’ve been there before–in the 1970’s during the Vietnam War because there was a strong peace movement there and again in the 90s with Ted Turner when the Braves were playing the Pirates during the World Series.

Here’s a view of the field that I took from my hotel window during a game the other night. (The Pirates won). I thought back on that time with Ted. I must have been 53 or 54 years old and no longer an actor. If anyone had told me then that I’d be back in Pittsburgh at age 76 filming with Russell Crowe I would have pronounced them out of their mind. 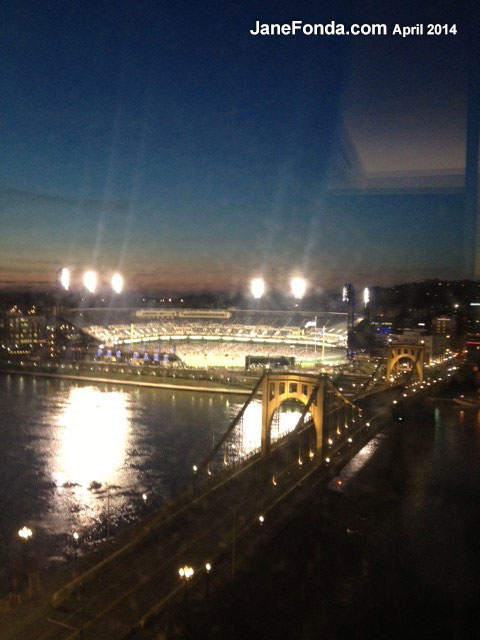 Everyone on the film seems to love Pittsburgh (and many of the crew are Pittsburgians). I can see why. It has so much personality. It’s a relatively small city with a whole lot of history surrounded by hills that are part of the Allegheny Mountain range. Stand on many of the streets in the city and you can see where the street ends with a river and on the other side of the river are hills covered with forests. Within 10 minutes from the center of the city I saw deer everywhere. And there are bridges everywhere—446 of them.

View from another of my hotel windows 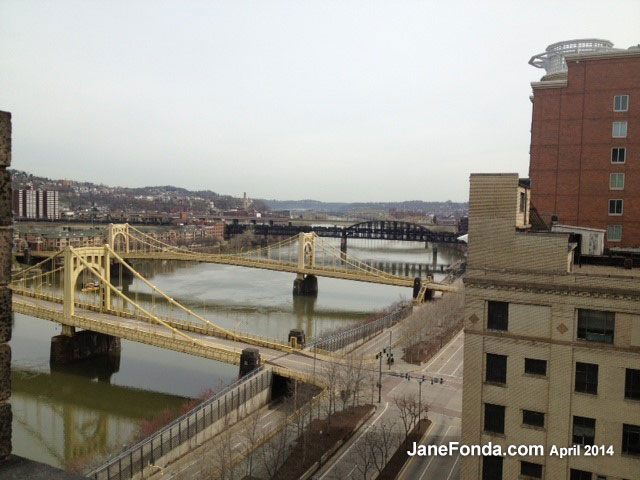 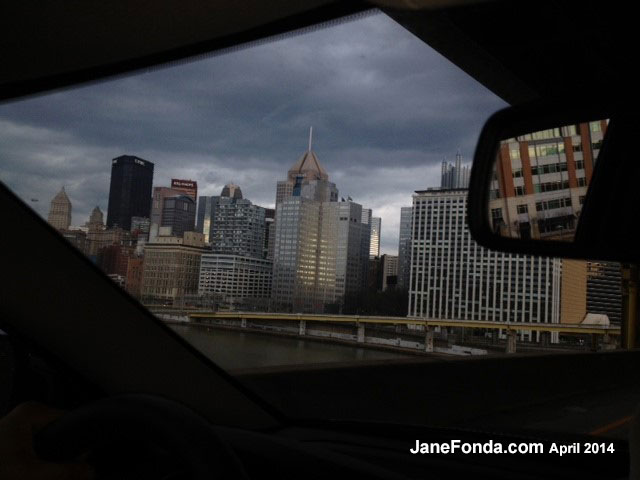 View from the car crossing a bridge.

Like a lot of old cities, there’s a wonderful combination of old and new 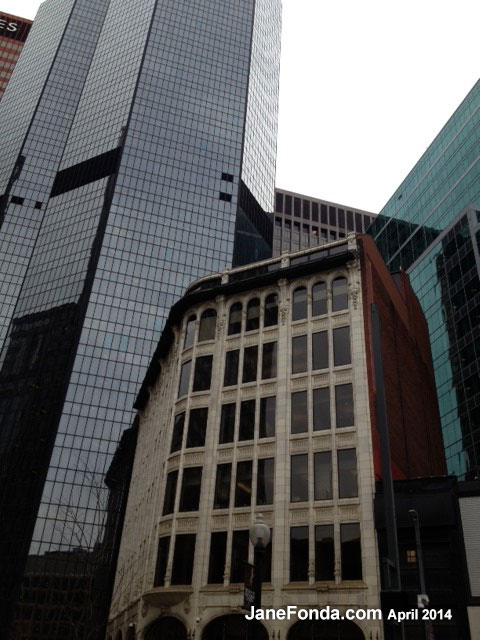 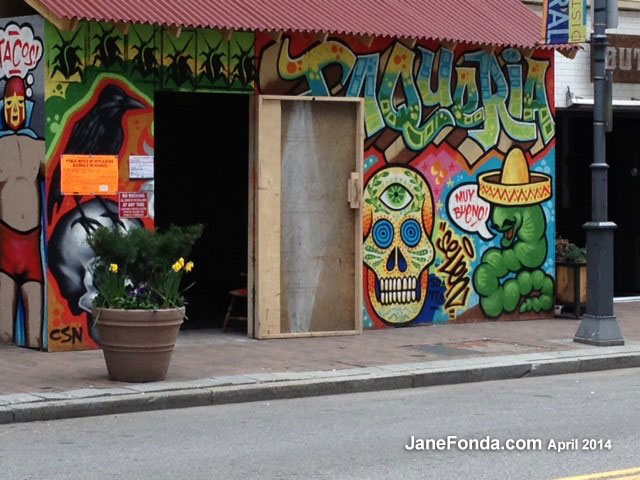 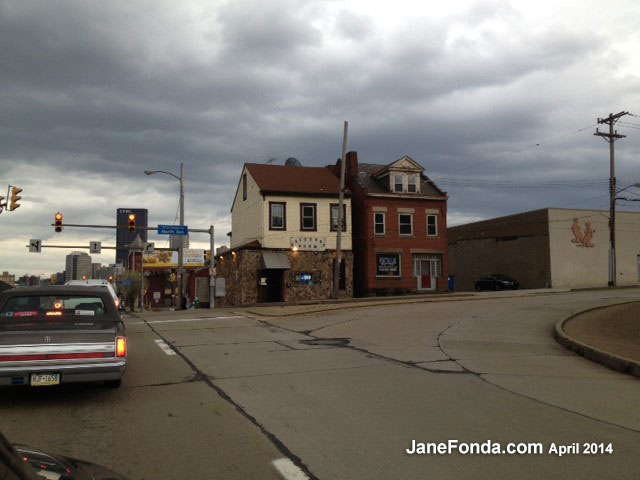 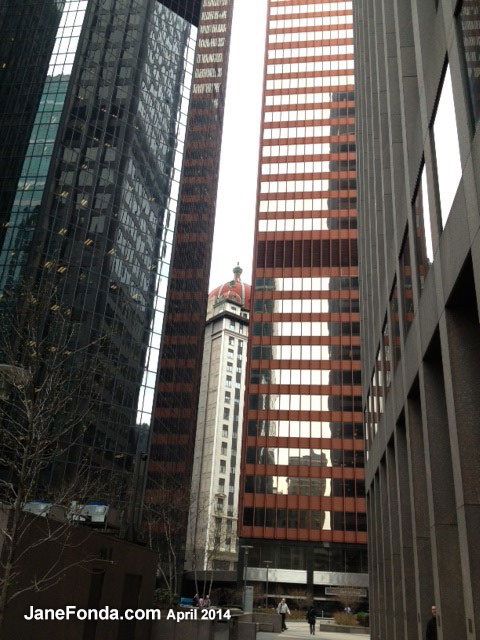 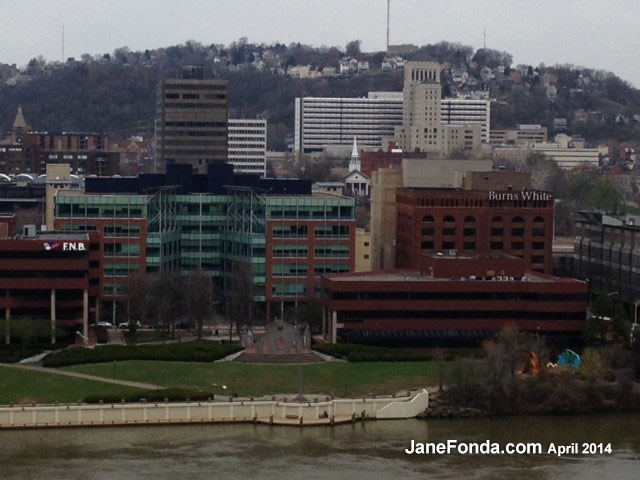 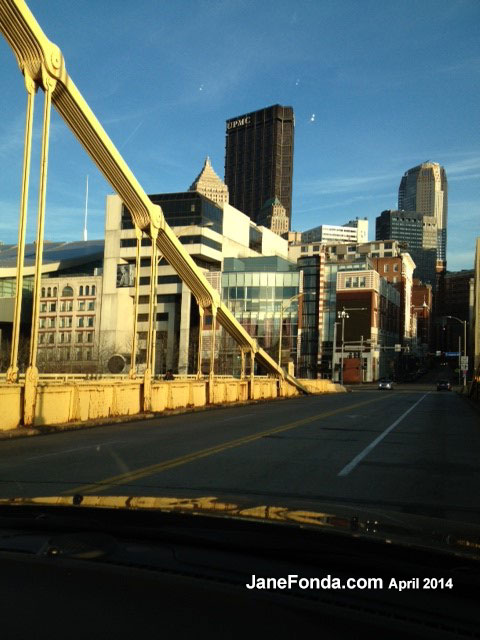 Pittsburgh is playing New York in the film. Here’s a view from my character’s office window. 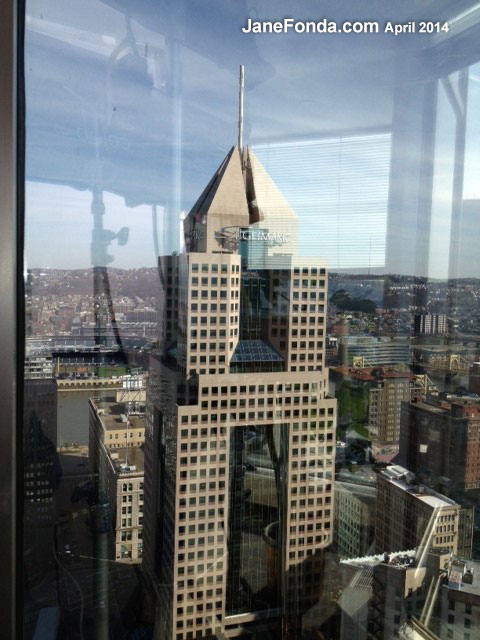 Here I am in character in my office 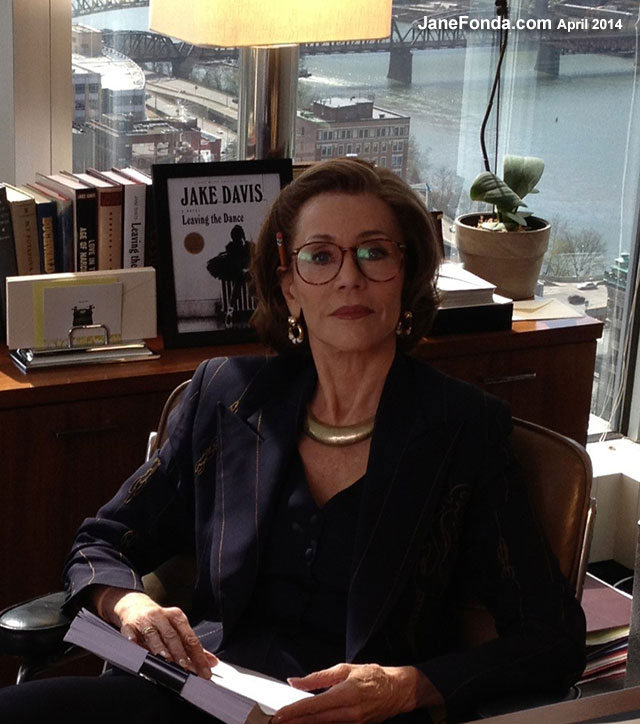 Monday night after seeing “Noah” we all went to a wonderful restaurant called Meat & Potatoes. This bear’s head was hanging over us with the menu item for bone marrow. I adore roasted bone marrow but not when I’m filming. Too rich. 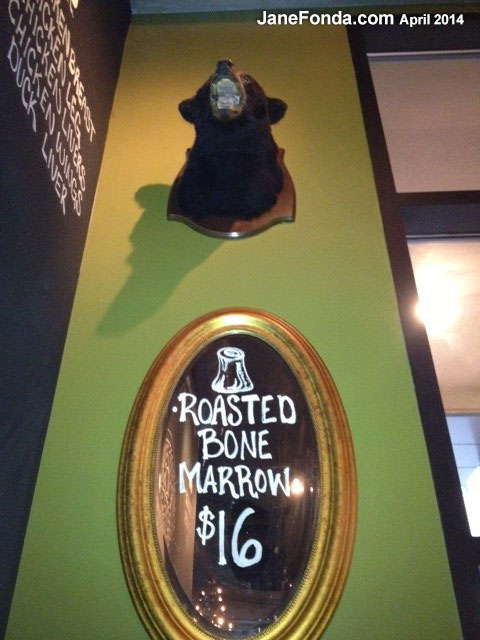 The bartender in the restaurant told us about a potato vodka made in Pittsburgh that, according to him, has been voted the best vodka in the U.S. I had plenty that night and I think he’s probably right. I’m having a case shipped to L.A. It’s called Boyd and Blair Potato Vodka. The web site is boydandblair.com in case you want to check it out.

The next day, Russell’s hairdresser, Jerry Popolis, brought in a roasted almond torte from a cake from Prantl’s Bakery that Huff Post says is the best cake in the country. Here’s a photo: 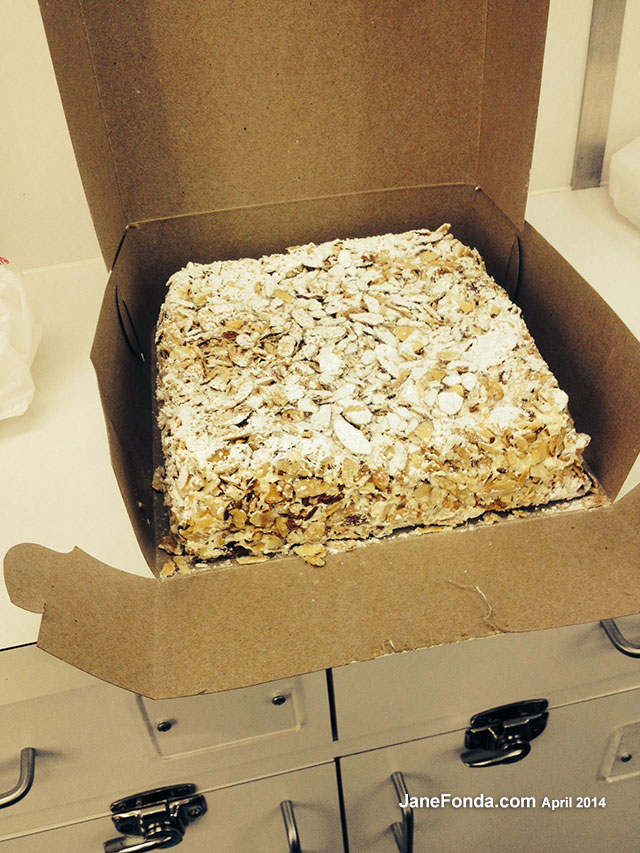 And here’s the link to the article in case you want to order one as I’m planning on doing: http://m.huffpost.com/us/entry/5133580?utm_hp_ref=tw Trust me, it is beyond good. According to the article, Bon Appetit named Pittsburgh the best new food city of 2014.

One more thing. I want to give a shout out to Starbucks. It’s like CNN International–when you’re away from home, you always know you can get good stuff there. I’m writing about this because my website friends seem to be interested in what I eat. Every morning (Except Wednesday when I had to get up at 4am and be ready to go at 5am–Starbucks opens at 5:30) I walked 3 minutes from the hotel, got the New York Times, a double expresso, a bottle of coconut & pineapple water, and oatmeal with nuts and brown sugar. And on my day off, I also got a slow-roasted Ham & Swiss sandwich on that amazing wheat bread they use. Yum. I’d sit for an hour, wake up, read the paper from cover to cover, and eat that delicious oatmeal and never had to feel guilty. Thank you Starbucks.