Yesterday I went to a friend’s baby shower. I hadn’t seen her since she was pregnant and when I saw her belly and her radiant face I began to cry. When I heard the words of wisdom her mother offered to her–to all of us–about how to raise a baby to be a happy, fully realized, person. I started crying again (and it wasn’t because I wanted to go back and redo the raising of my own kids all over again with more wisdom, though that did press in on me) . . . it was because her words moved me. 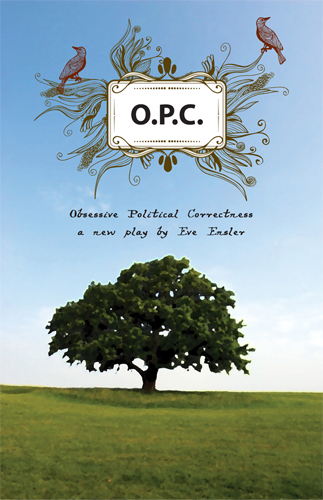 I’ve been in New York for the last five days workshopping Eve Ensler’s new play, OPC (Obsessive Political Correctness). Workshopping means actors reading the play, with a director to guide us, so the author can see what works, what needs changing, in the hope that, in time, the play will be performed for a mass audience. The afternoon of the last day, Friday, we performed for a small audience. The play is funny, very funny. A woman (me) wants to run for political office and launches a campaign. Her young daughter (Zoe Kazan) is a freegan, someone who buys nothing, who pays no rent but squats, who eats perfectly good but bruised, day-old food she finds in garbage bins. Freeganism is, in fact, an actual, real movement. The mother worries that her daughter’s eccentricities will hurt her campaign. The girl makes her mother a dress out of apricot, the kind that comes all rolled flat in cellophane like what we put in our kids’ school lunches The mother wears it for her campaign announcement and, in defense of her daughter, says proudly that it’s a reflection of the girl’s environmentalism, “Eat What You Wear” so to speak. The dresses become a humungous hit and start being mass produced in a variety of flavors but people wear them with diamonds and fur which is antithetical to what her daughter intended. With all its humor, the play has some profoundly important things to say about how we humans are destroying the planet with our greed and our waste and how we can/should be living differently. I started crying during my last speech when I tell my daughter what it feels like being in office, being taken seriously and I thank her for helping me and during the daughter’s final monologue about the species that are going extinct and oceans rising and what’s we human are doing to the planet I started crying and couldn’t stop and had to tilt me head back so people wouldn’t see. When the play was over I took Eve in my arms and sobbed for many minutes.

A few days, Roy Teeluk, who does me hair in New York, showed me “Ashes and Snow,” a book of photographs by Gregory Colbert (that is also a film made by him), photographs of elephants sitting with, praying with, bowing with, sleeping with young indian boys and other pictures of people swimming with whales. They are staggeringly beautiful and, again, I cried. Two days ago Gloria Steinem, in an email, told me that “. . . in Cherokee the word for “butterfly” and “elephant” is the same–because of the ears.” She went on to say, ” I wondered how the Cherokee knew that, since there are no elephants on this continent. But we all came from Africa–maybe it’s cellular memory” . . . and Tears came to my eyes.

I can no longer watch news stories or look at photos that show the killing of animals for greed. There was a TV story about the Japanese rounding up dolphins and killing them for food. I got ill. Can’t stomach it–literally.

I’m just mentioning a few of the many times in the last weeks and months that I have cried and it’s got me thinking: how come my tears are so close to the surface? How come pretty things, kind deeds, sad stories, acts of courage, good news, someone’s flax of insight, all get me crying or, at least, tearing up? The Fondas have always been cryers. My father once said, “Fondas cry at a good steak.” My son and daughter are the same. But I find my emotions are way more accessible than they were when I was younger and I’ve come to feel it has to do with age. I have become so wonderfully, terribly aware of time, of how little of it I have left; how much of it is behind me, and everything becomes so precious. With age, I am able to appreciate the beauty in small things more than when I was younger perhaps because I pay attention more. I feel myself becoming part of everything, as if I bleed into other people’s joy and pain. Maybe, without my being conscious of it, there’s the reality that in a few decades (if I’m lucky) I will be in the earth, fertilizing some of the very things I look at now and tear up over. (I’m not going to be cremated, uses up too much energy and gives off too many toxins, nor do I want to be in a coffin. Just dump me in a hole and let me morph into whatever as quickly as possible.) I ache for unwanted children in the world, for polars bears, and elephants, whales and Monarch butterflies, and dolphins, gorillas and chimpanzees. I remember reading once that biologist E.O. Wilson said something like, “God granted the gift of intelligence to the wrong species.” I’m paraphrasing but he explained, intelligence should have been granted to dolphins, for example, an animal with a brain who plays and is smart but has no thumbs and is not a carnivore.

I’ve listed sad things but what startles me even more is how I get emotional about nice things, like Kerry Washington’s belly and her mother’s words of wisdom and Elizabeth Lesser telling me about the new book she’s writing. Maybe because I’m older my heart is wider open, like a net that wants to catch all the things that matter. The first time I heard Jungian analyst and author, Marion Woodman speak, I went up to her afterwards and burst into tears. She took me in her arms and said, “It means your soul was touched.” Heart, soul . . . I don’t know which is which.. I suppose they’re the same basic thing and mine is/are so wide open I have to only wear waterproof mascara from now on.