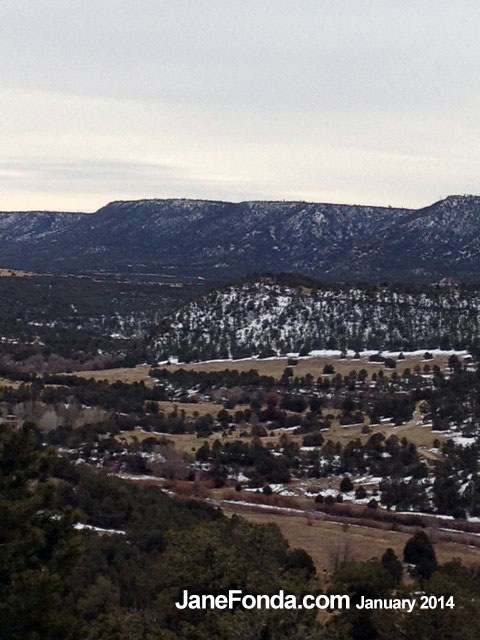 After reading my last blog, one of my blog friends asked who takes my Christmas ornaments down when the holiday is over. Of course I do, I said. And so I thought I’d do a new blog around that . . . and a few other things.

Went back to the ranch and it was really cold. In fact part of the river was frozen. 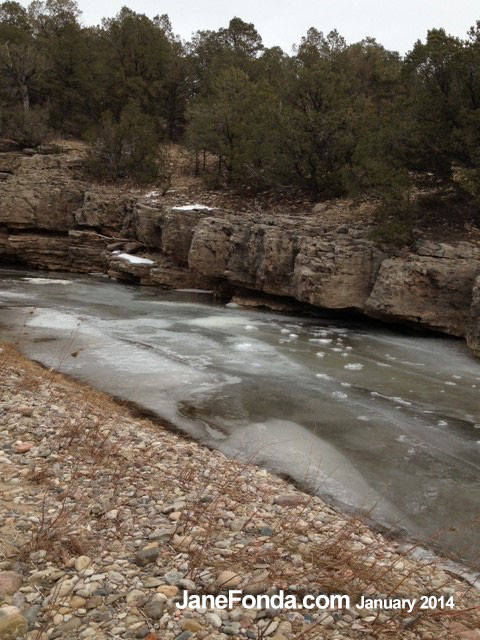 Couldn’t resist taking this close up of the river rocks. When they’re wet the varying colors are even more vivid. 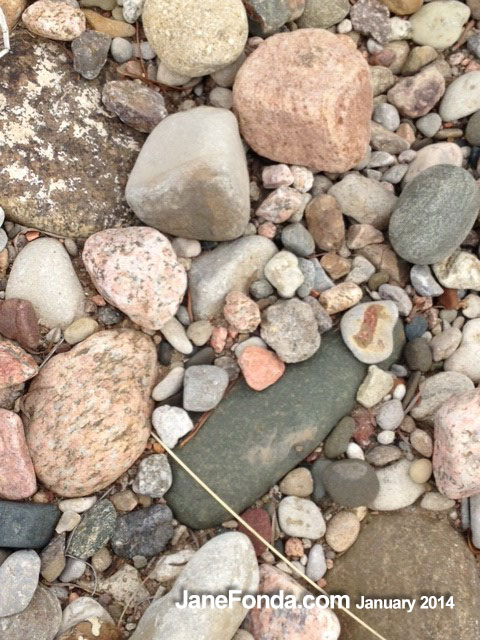 It took me 2 days to put the tree up so I gave myself the same amount of time to take it down–starting at the top. 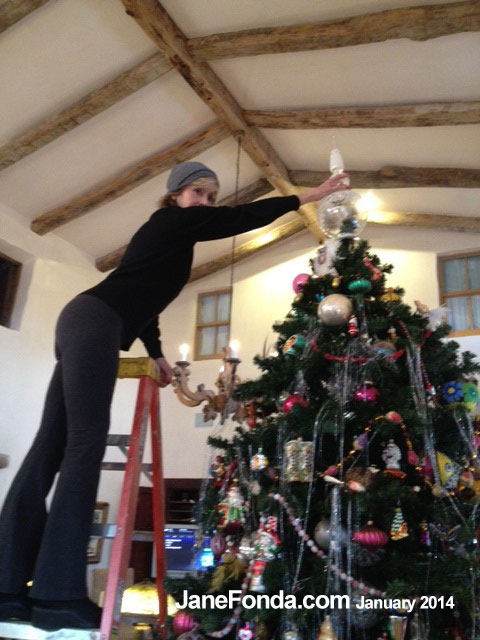 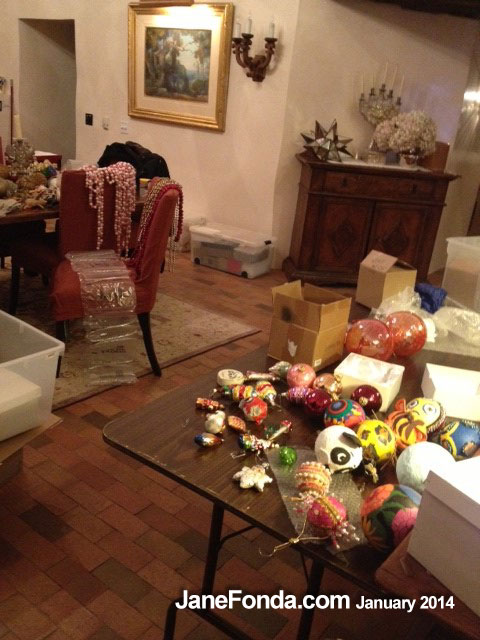 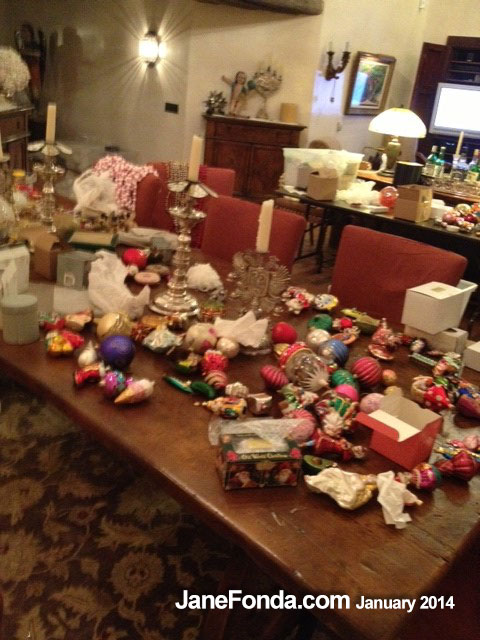 While putting it up, I listened to “Hits of the ’90s” on the TV music channel (dancing a bit between ornaments). Taking it down I listened to Governor Christie’s implosion with “Time for some traffic problems in Fort Lee,” his staffer saying she “worked the cones” and news about all those elected officials who want to make the poor poorer by eliminating unemployment (having already advocated cutting food stamps) and I wondered why there hasn’t been more mainstream/pop culture pieces about the confirmation of Janet Yellen as the first female Chief of the Federal Reserve. This is a BIG DEAL!! As my wise daughter-in-law said today, “It’s Ironic considering she will have far more influence over our culture in the long run than Miley Cyrus who is referenced every 10 seconds.” This wasn’t said to be critical of Miley but rather pointing out that it’s perhaps sexism why the same media that chases down every second in the development of a pop star coming into adulthood, not to celebrate her accomplishment or development, but rather to wait for a moment when she is caught with an inadvertent exposed nipple, or what have you, is silent on the confirmation Yellen particularly in lieu of what might have been–a repeat of the old boy approach that made it possible for the horrific recession that has hurt so many.

And speaking of women and hurting financially while trying to do it all—parent, survive…Maria Shriver has a new groundbreaking report that explores the lives of millions of women. It’s called The Shriver Report: A Woman’s Nation Pushes Back from the Brink. It’s being released in a matter of days. See the trailer and more information here: http://shriverreport.org/shes-the-one-maria-shriver/

And a few additional misc pictures I took—our windowsill collection of found relics. 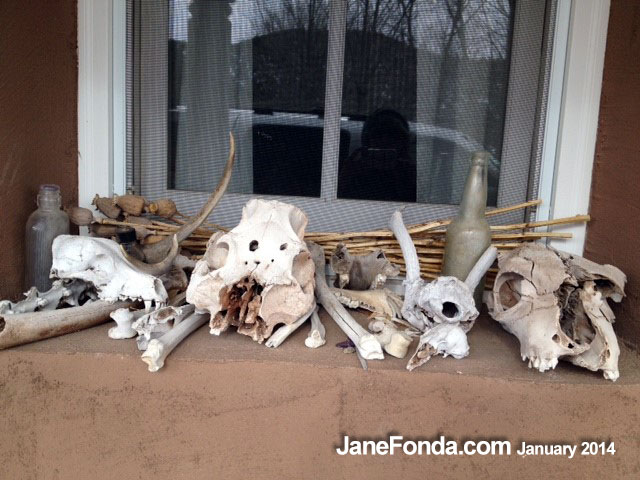 And Tulea in her carrying case waiting for the flight back.
Happy New Year! 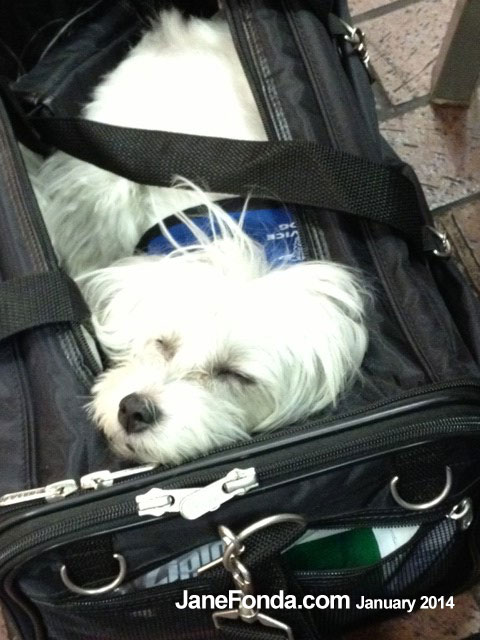