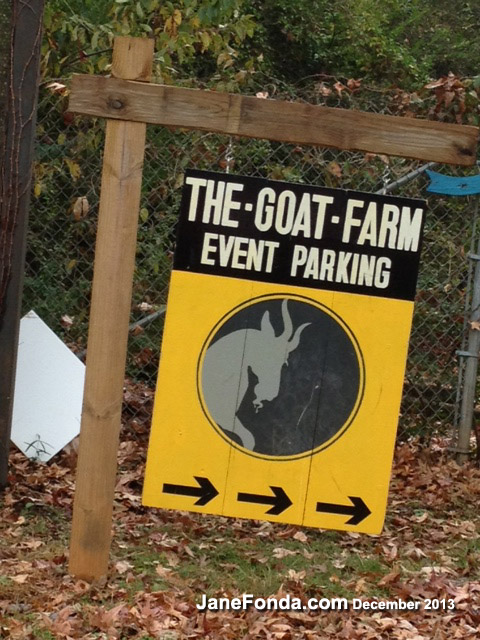 I went to Atlanta on Sunday with my grandchildren. I wanted to spend more time with them and see my daughter, Vanessa.

She has rented a studio in a place in west Atlanta called the Goat Farm. Atlanta is not a big city like New York or Chicago or Los Angeles, but it has so many pockets of uniqueness–places with very different personalities and Vanessa has made her creative home in one of the most unusual. Many people who live or work near the Goat Farm have never been there; don’t even know it exists. I never did. I’m told that when there are art exhibits there it comes to wild life, very fun and welcoming. There are dance performances, art and sculpture exhibits. There a little, homey cafe with bookshelves full of old books and a bohemian vibe. When there no such events, it can seem foreboding, with a “strangers-keep-out” vibe. I think that’s why The Hunger Games has been filming there.

Vanessa does her creative work there: clothes, bags and various other items made from recycled things. I had never seen her studio or the Goat Farm.

Here’s one of the goats of the Goat Farm. I’m not sure how many there are. I saw two of them. 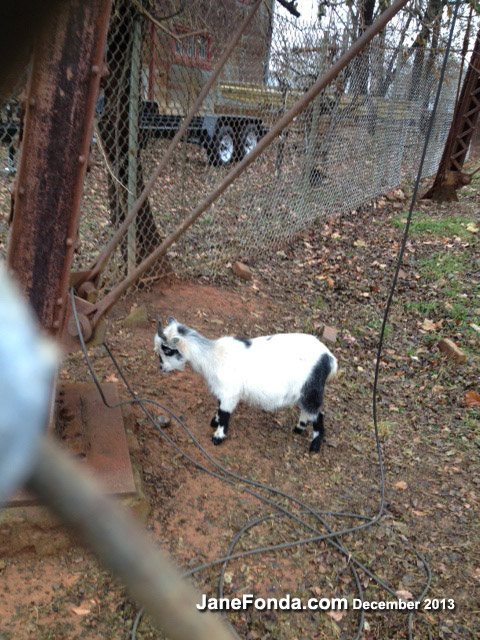 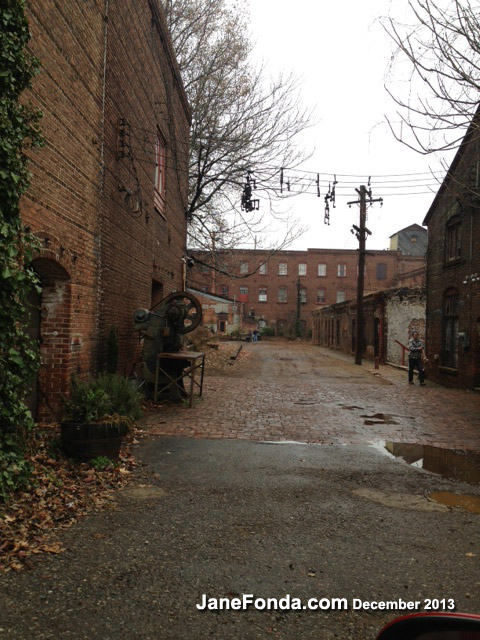 My daughter told me that this long building is one of the more recognizable things of the Goat Farm in “The Hunger Games” (the new one that’s a smash right now. I haven’t seen it yet but will asap. I adore Jennifer Lawrence and loved the first one.) She said they did CGI (computer graphic imaging) to create the impoverished looking mountains and background behind the building. 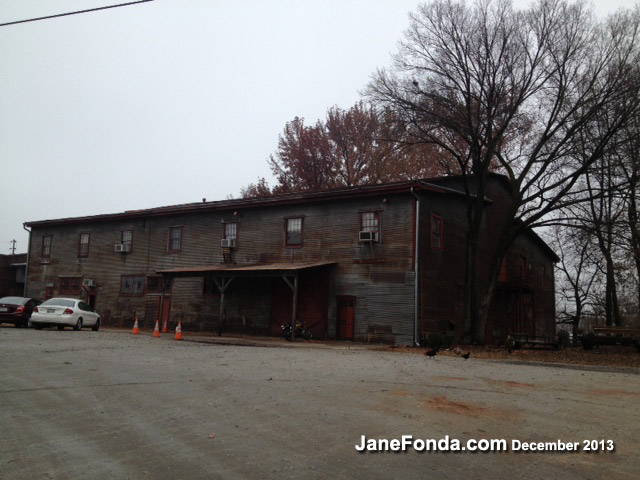 Below is a mural on one of the walls. Don’t know who the dude is but the bright colors in the midst of the old brick buildings stands out nicely. 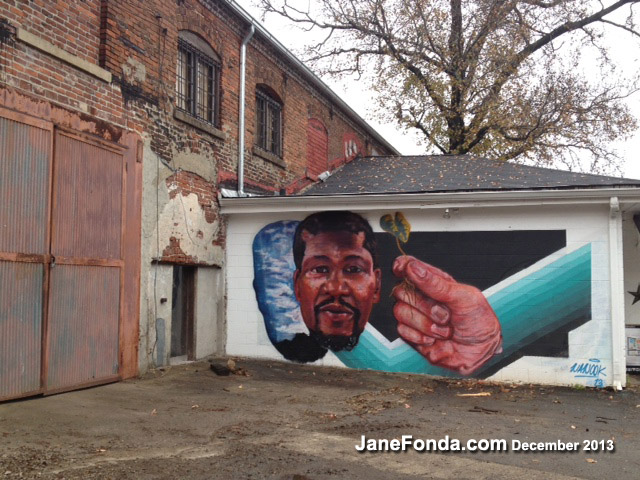 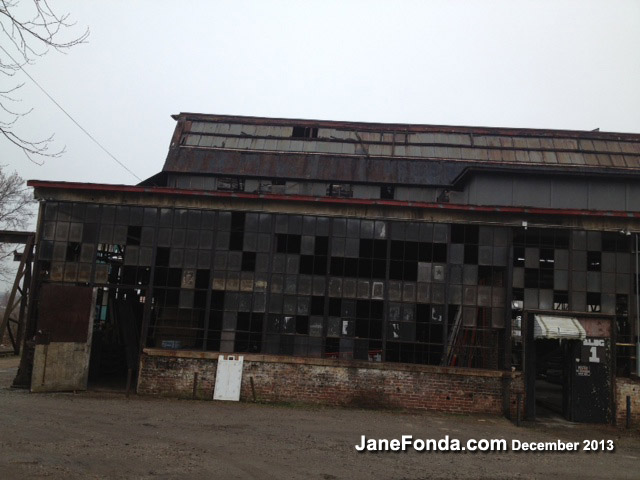 This is an old couch that Vanessa reupholstered with recycled fabric. As you can see, Tulea came with me. 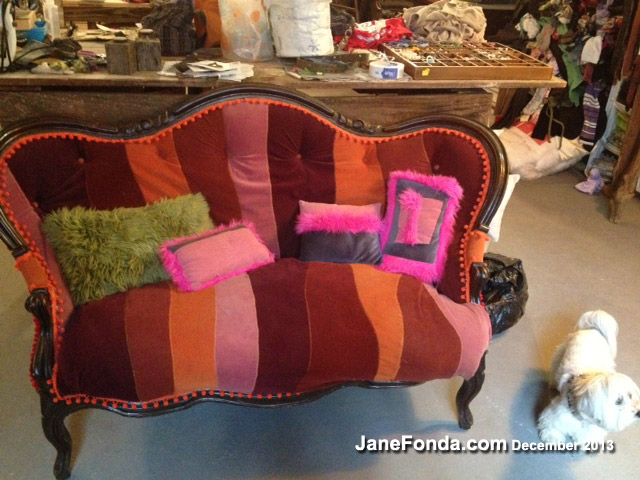 She has oodles of threads, scraps of fabric, old clothes, mannequins… 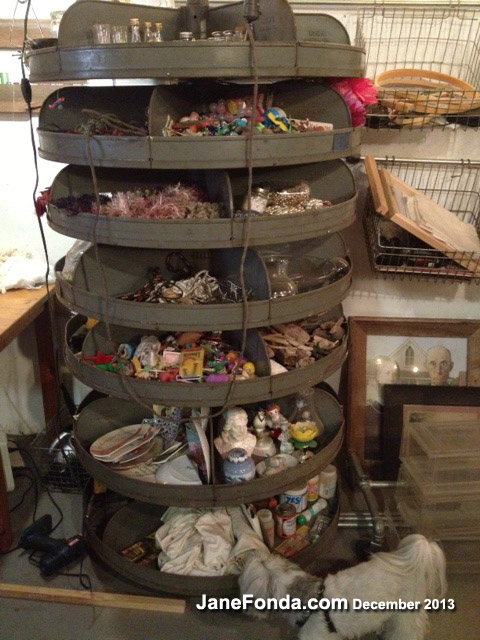 I love that she makes trash baskets out of trash. 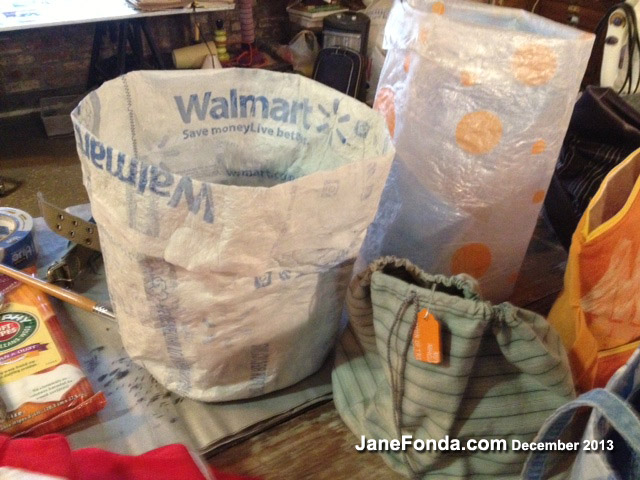 She found this old picture of Jesus knocking on the United Nations. Love it! 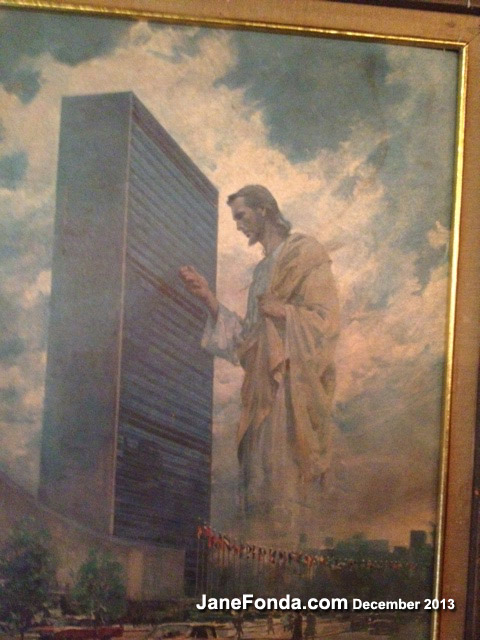 View from her studio! 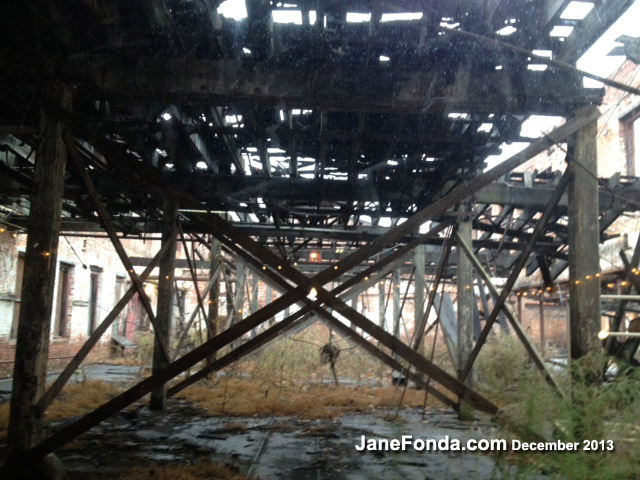 Vanessa took me to a really nice new restaurant near the Goat Farm off of Howell Mill Road. I was stunned by all the development that has gone up around there in the five years since Atlanta was my home. (It’s always strange to be back here and be staying at a hotel but the Loews midtown is so nice to me and I often run into actors who stay there while filming in this city. A number of the Hunger Games actors are here (NOT Jennifer!) and Jeff Daniels stayed here while he and Jim Carrey were filming “Dumb and Dumber Too” which he thinks is funnier than the first which, to my mind, is saying something, cause that film was a riot.

My daughter and her family went out to dinner Monday and Tuesday nights. During the day, I sat in my hotel room with Tulea working on the novel I’m writing. Wednesday night Rutherford and Laura Seydel invited me to go to a Hawks/Clippers basketball game at the Phillips Arena. Laura was my stepdaughter when I was married to Ted Turner and we have all remained close. With us was their son, John R., who is now in college in Denver (straight As!). I was so happy to see him. It has been quite awhile and he’s all grown and gorgeous. I filmed him being born. He’s the young man in the plaid shirt sitting next to me. They still call me Grandma Jane. I love it!

Rutherford is one of the owners of the Hawks and the arena. When the Thrashers hockey team left Atlanta, the owners, shown here, turned the players’ dressing room into the owner’s club house where we all had dinner before the game… 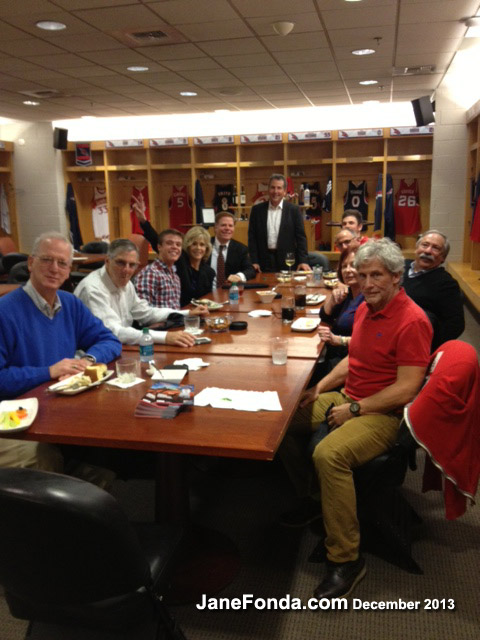 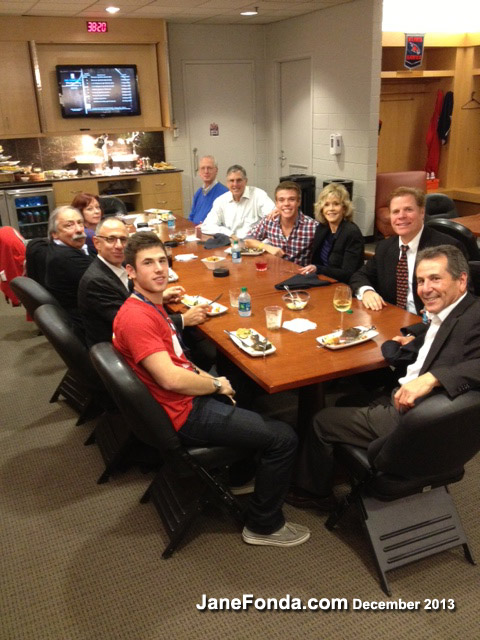 Rutherford took me into the players’ club house and sat me in one of the special, ultra-large armchairs they had made for the ultra-large players. 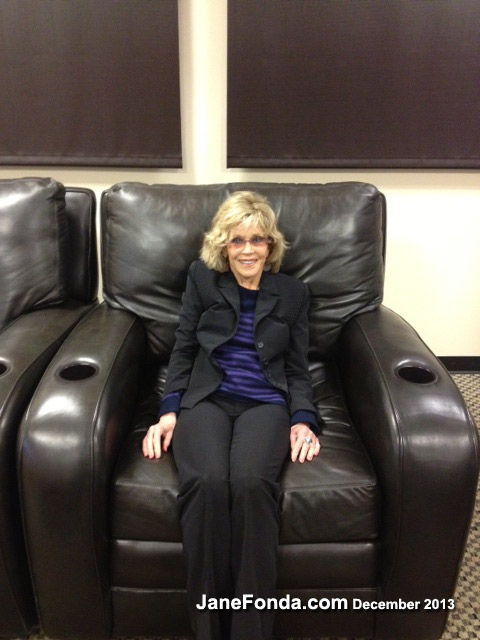 Then he had us pose with some of the Hawks cheerleaders. That’s Laura between me and Rutherford. You’ve probably seen her in other of my blogs. Aren’t they a good-looking family? Not only that, but every one of them is an active environmentalist and philanthropist. I am so proud of them. 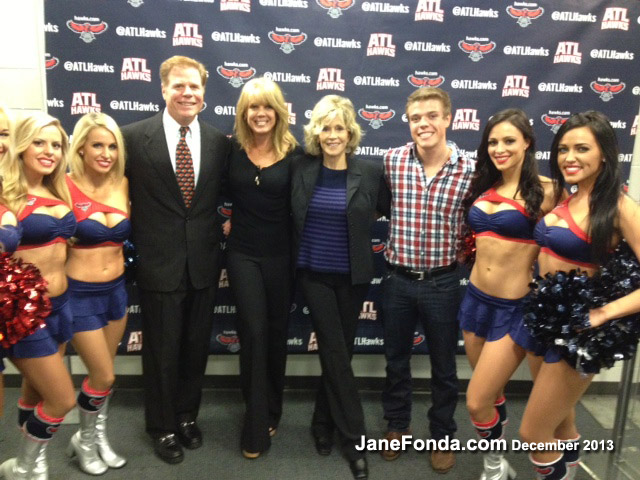 There was a time when I could do a high kick like that. 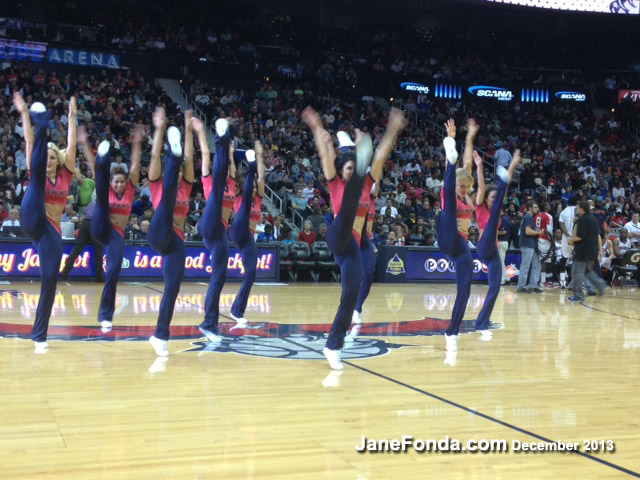 It’s fun sitting right on the floor. I hadn’t done that since the nineties when I’d go to Hawks games with Ted back when he was an owner. The Hawks have become a much better team now. Back then I didn’t understand the game like I do since I’ve been with Richard. He’s a major basketball fan and has taught me a lot. It was complicated for me that night because I now live in Los Angeles and know Chris Paul and love the Clippers but I was sitting with the Hawks owners so I kept my mouth shut. The Hawks won. I was happy for Rutherford 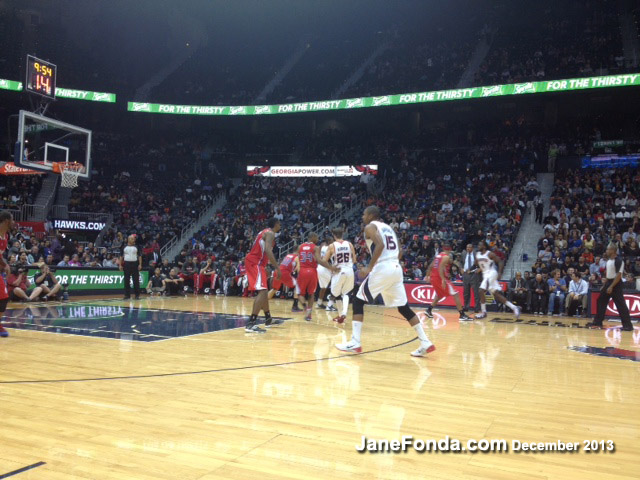 Friday after school, a friend of my daughter who’s husband works for the Atlanta Zoo, took us for a visit with my grandkids and two friends of theirs. Here’s a video of the young giant panda

This is the new baby panda 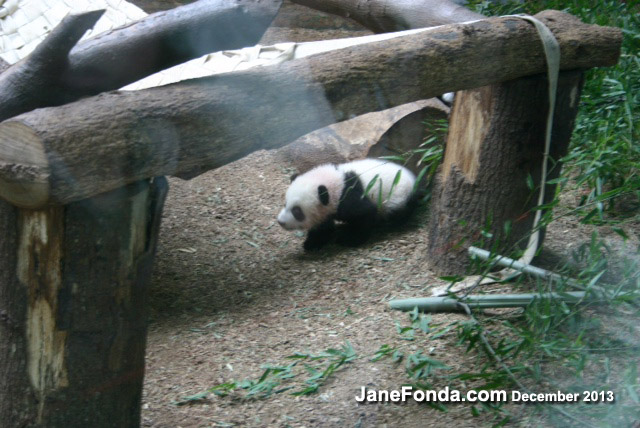 And this is a picture I took from the TV screen of the panda nursing her mama. They were backstage so we could only see this on the closed circuit screen. Sorry that it’s kind of fuzzy. 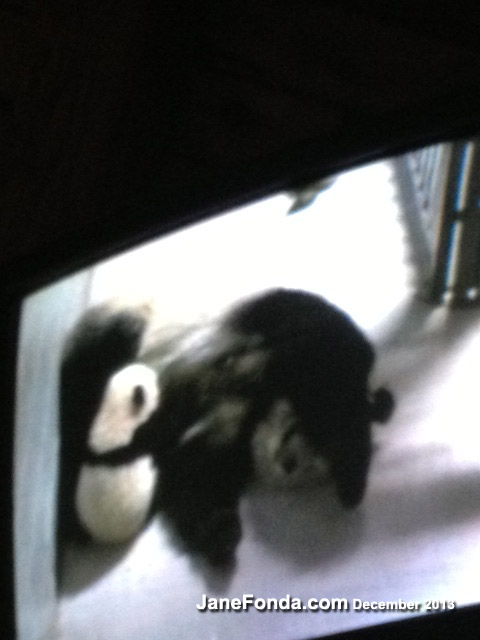 We went into the parakeet cage. 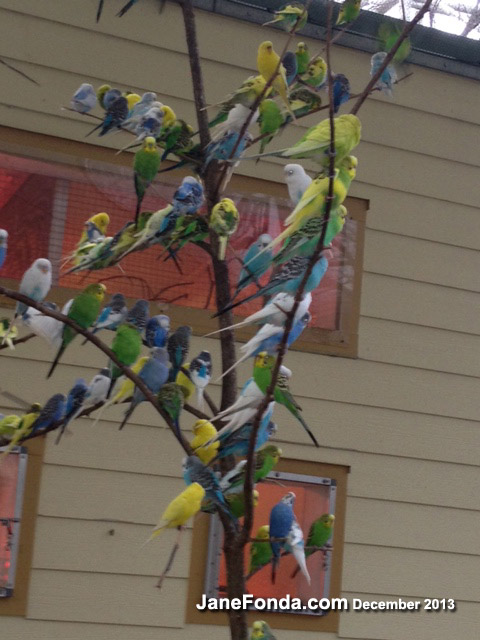 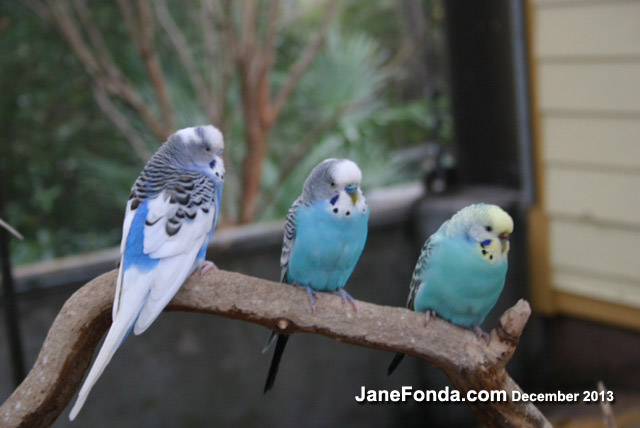 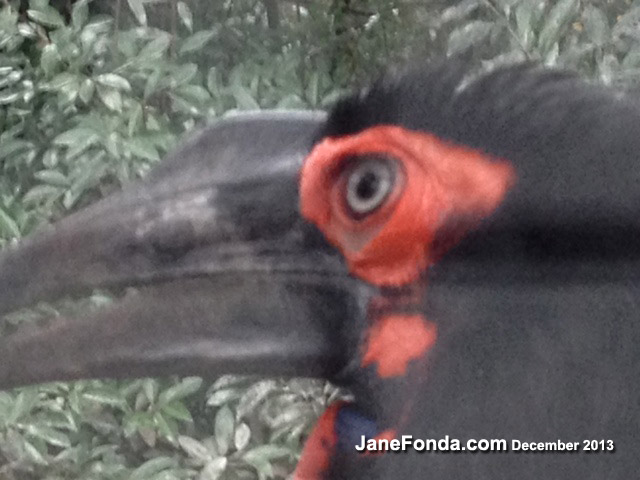 We had dinner Friday night at The Imperial Fez, a Moroccan restaurant on Peachtree Street where I hadn’t been since I had Ted’s 60th birthday there (with a dozen belly dancers). I don’t know how to get rid of ‘red-eye’ when I take photos on my iPhone. Sorry bout that. Also, Viva and her friend are out of the picture but a waiter took this and it was too dark for me to tell on my phone that it wasn’t the best but you get the idea. 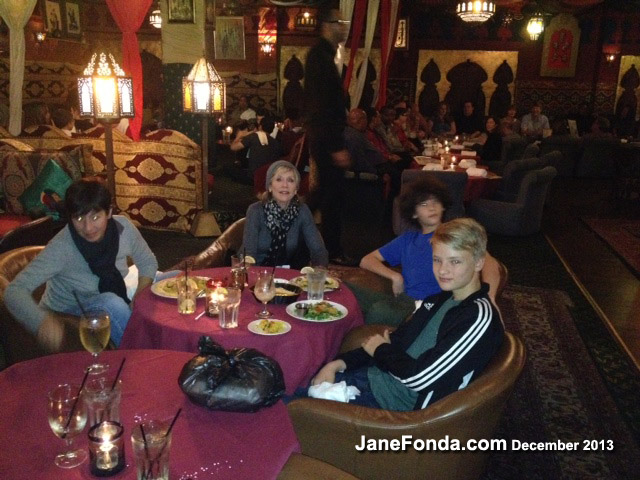 The belly dancer deserved better, too. She was good. 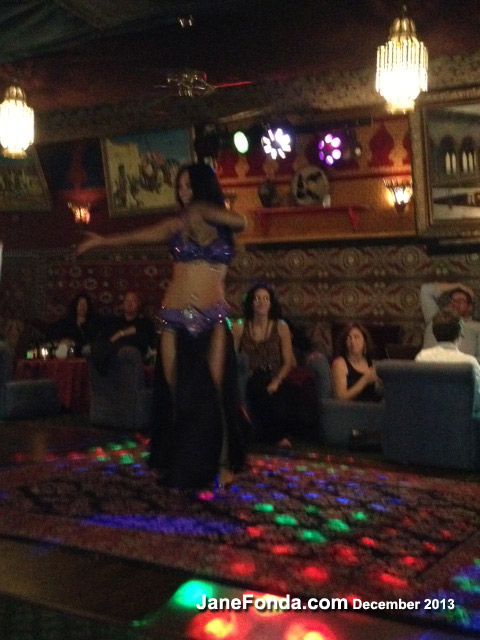 And the next day I came back to Los Angeles where, last night, I had some friends from Atlanta to our house for drinks here we are in front of a wall covered with Richard’s Gold records: left to right is Chel Tanger, Peggy Hagen, me, Tom Larsen and his wife, Lea Ann. Tom, who is an executive at Coca Cola, is the chair of the board of The Georgia Campaign for Adolescent Power & Potential which I founded 8 years ago. 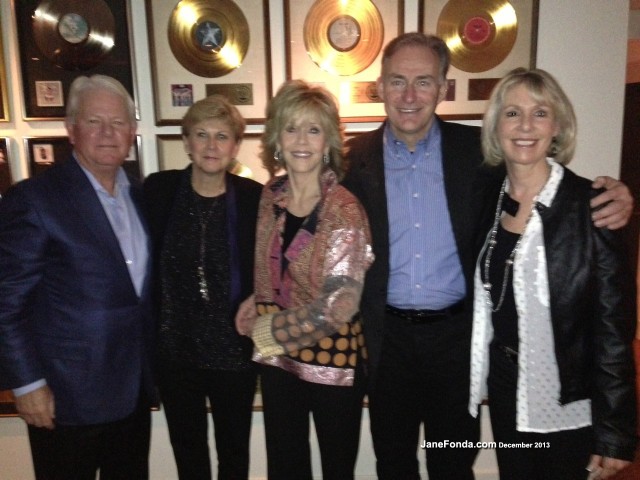 Here we all are at Spago’s where we had a yummy dinner. 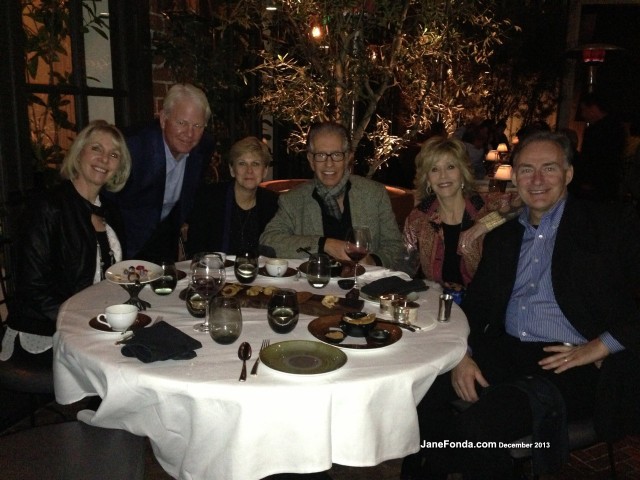 This visit and dinner offered last year at a G-CAPP auction and Chel made the winning bid and the Larsen’s, who are their close friends, came along. It was fun and funny. I’d just gotten off the plane from Atlanta to spend the evening with Atlantans.