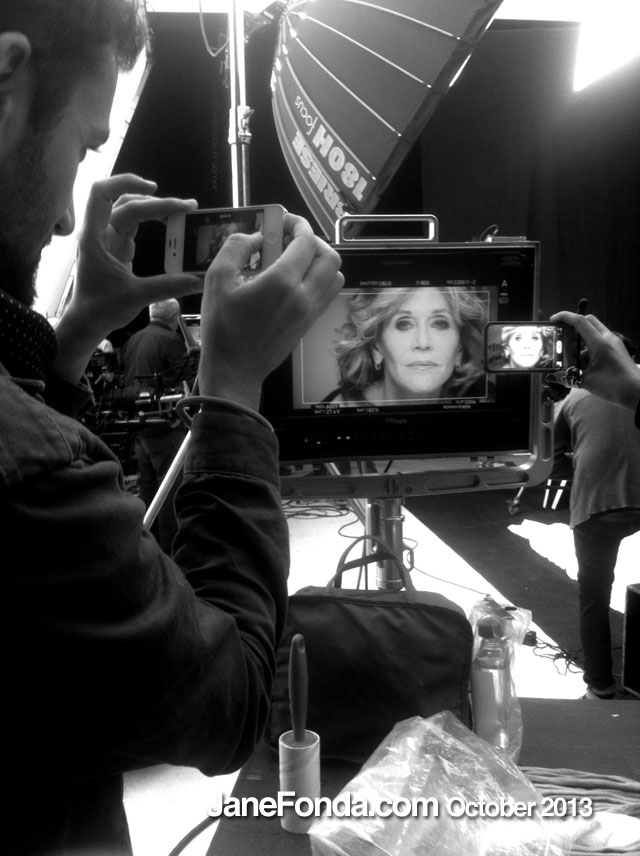 First I went to Atlanta for the annual Empower party that raises money for my Georgia-based non-profit, The Georgia Campaign for Adolescent Power & Potential. We honored Dr Sanjay Gupta with the Health Pioneer. It was a lot of fun and a big success. My favorite ex-husband, Ted Turner, was my date.

Turns out Dr Gupta went to University of Michigan and, with his wife Rebecca, lived near Jeff Daniels in a small lake town 15 minutes from Ann Arbor. They all remained good friends. Who knew! Jeff was in town filming “Dumb and Dumber too” with Jim Carey, and he, his wife Kathleen and I had dinner at Sanjay’s & Rebecca’s and had many laughs, especially when Jeff described his experience at the Emmys where he was the big surprise (and much deserved) Best Actor win for his role in “The Newsroom.” It was fascinating talking to Sanjay about all he learned from his cannabis research for the CNN documentary, “Weed”–and it’s always wonderful when you discover that wives of famous men you know are really smart and funny in their own right. 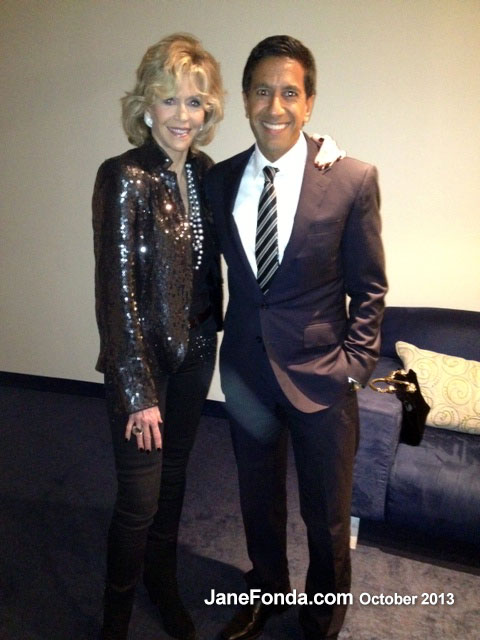 From there, I traveled to Thomasville in south Georgia to participate in the first annual Covey Film Festival (‘Covey’ as in covey of quail which abound in that part of the state). The festival benefitted the Thomasville Community Resource Center which I helped found in the mid 1990s. We now have expanded to over 400 kids in after school programs. The festival focused on films and documentaries about children and children’s issues and I got to see “Beasts of the Southern Wild” again and interview the author, Lucy Alibar, who is a beautiful, fascinating woman and native of Thomasville as are many creative, film-oriented people.

From Georgia I went to New York where The Women’s Media Center had our big annual gala which Lily Tomlin Emceed brilliantly and where we honored media women who’ve made a major impact. Paley Center President & CEO, Pat Mitchell presented the Pat Mitchell Lifetime Achievement Award to Christiane Amanpour, Gloria Steinem presented a major award to Sheila Johnson, founder of BET; Marta Nelson, editor in chief of Time Inc, presented the Mary Thom Art of Editing Award posthumously to Mary Thom, I gave Lindy West the Social Media Award. Her acceptance speech was hysterical. Check out her website. Here’s a picture taken of us three co-founders (Robin Morgan, Gloria Steinem & me) taken from the giant screen, hence a little distorted. (and okay, so I wore the same outfit for two galas in a row.) 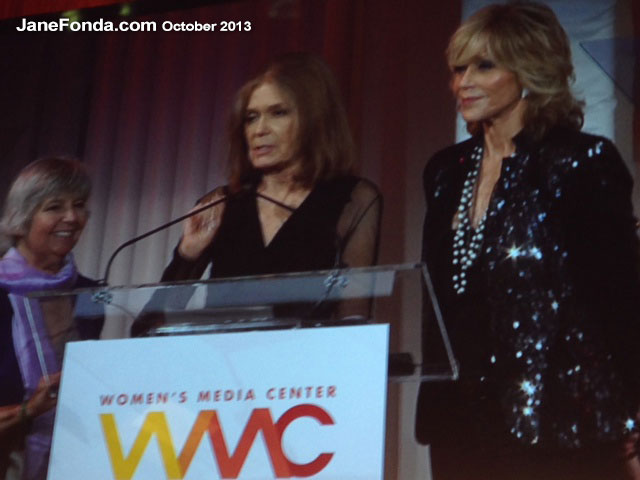 Sally Field, Catherine Keener, Rosario Dawson (with her mother who looks like her sister!), Jen Regenstreich, and Sharon and Howel Ferguson from Thomasville, GA, were at my table. 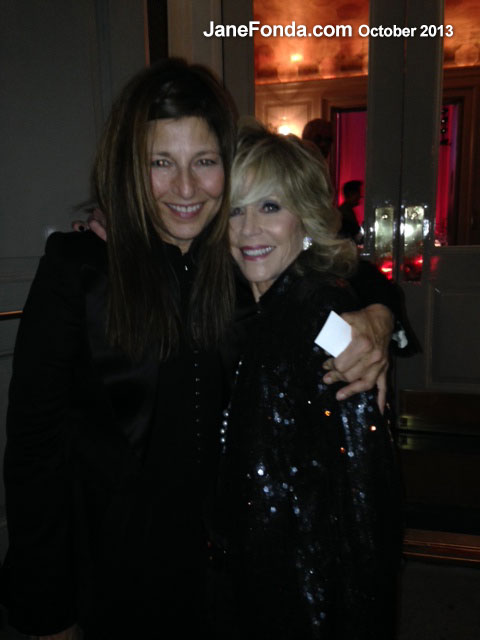 Me with Keener, taken by Jen.

I didn’t take photos but had a wonderful dinner with Eve Ensler after which we saw an all-woman performance of “Julius Caesar” at the St Anne’s Warehouse in Brooklyn. It was a brilliant production. The warehouse was a women’s prison and the prisoners decide to perform the play, mostly in their prison garb. I never understood the play so deeply. It felt like it was written for today. The actors were superb as was the directing.

I also had great dinners with my BBF, Paula Weinstein, and with my son Troy. During the 2 1/2 days before I had to leave for Paris (someone has to do it :-), I spent 8 to 10 hours a day in a friend’s sun-drenched, inspiring apartment basically without getting up from the table, writing. I’m working on my first novel and I was, as they say, in the zone.

In Paris I stayed at Le Meurice Hotel. My first time staying there, although in the 70’s I filmed a scene in “Julia” there–the scene where Lillian Hellman (me) meets up with Dorothy Parker (Rosemary Murphy) and her husband (Hal Holbrooke). I was upgraded to the penthouse and I felt like royalty. 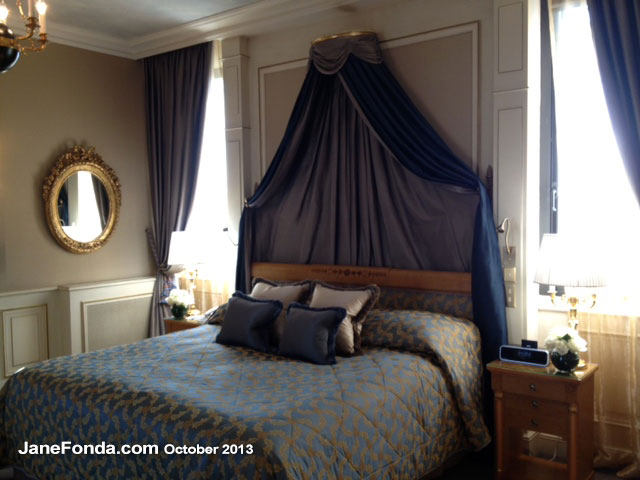 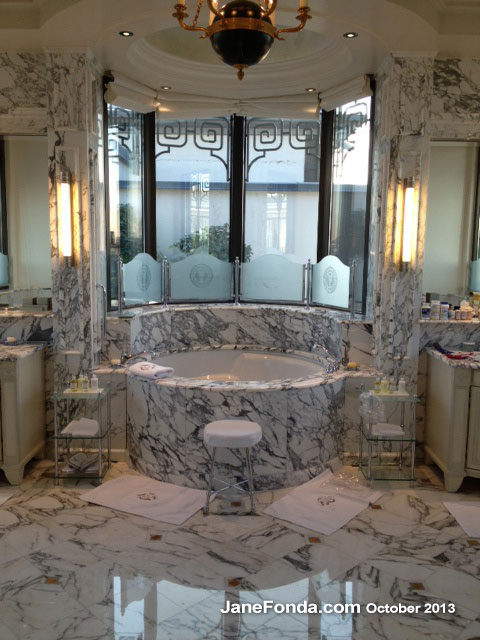 Barely had time to enjoy this luxurious bathroom. 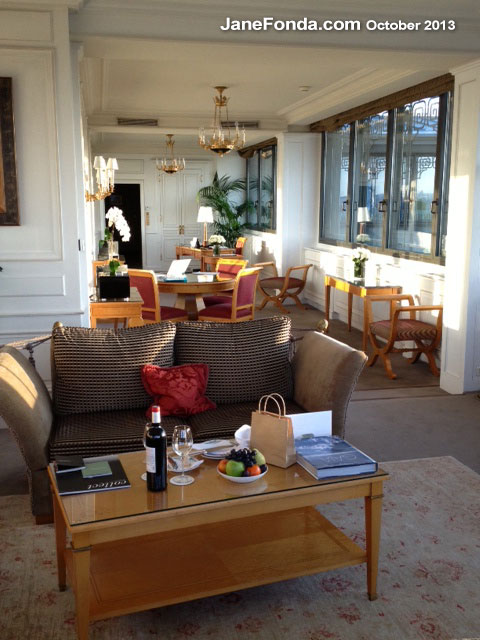 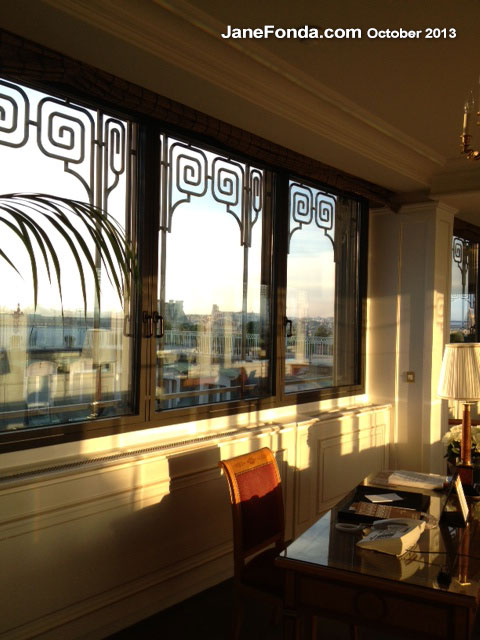 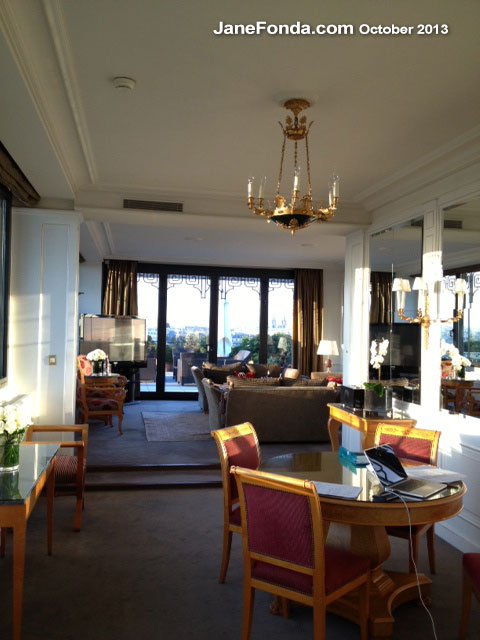 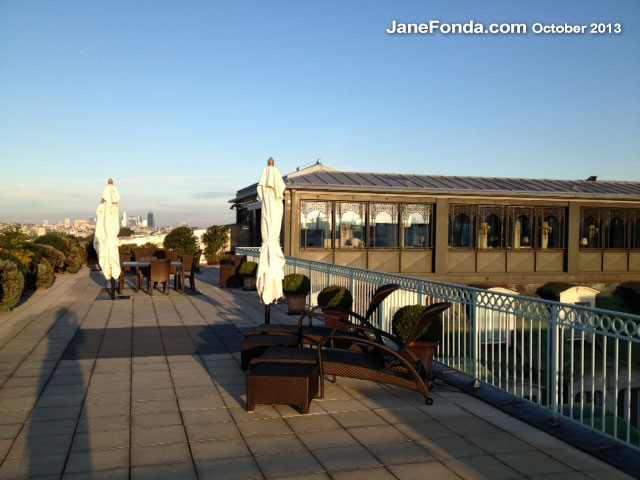 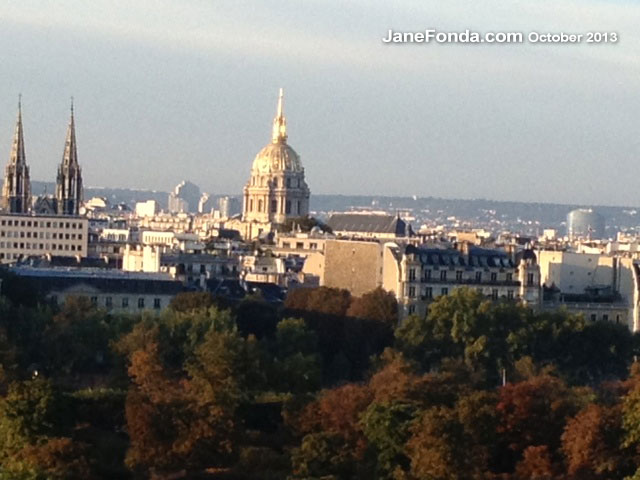 In the distance you can see Montmartre 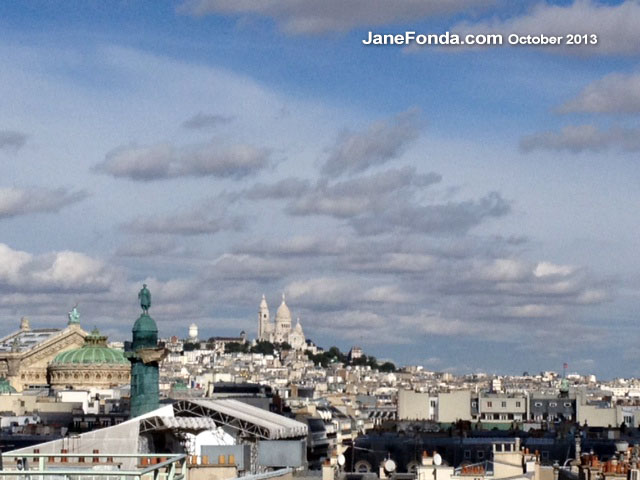 The Jardins des Tuileries and the Louvre Museum. 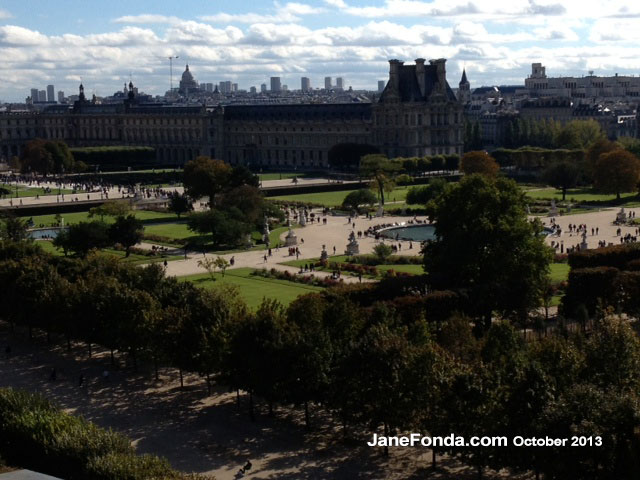 Monday we had a long day filming a commercial for L’Oreal’s new “Age Perfect Extraordinary Oils” for the face. There were 3 of us, me and the Dutch model, Doutzen Kroes, and the German-born model, Tatiana. Still photos were taken by Liz Collins. We were filmed alone, in couples and in threes. 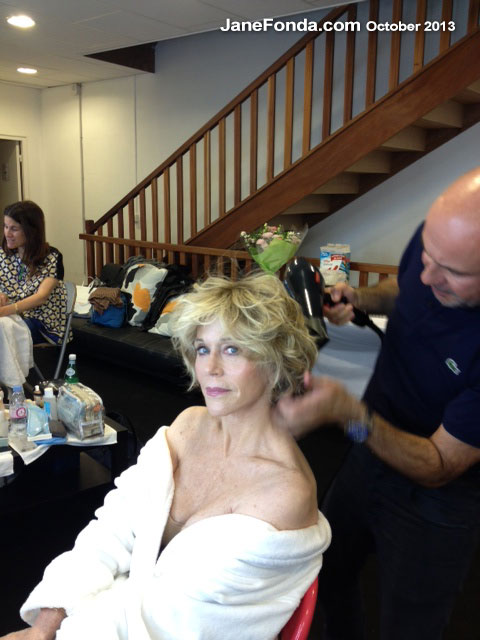 Charlotte Willer did my makeup 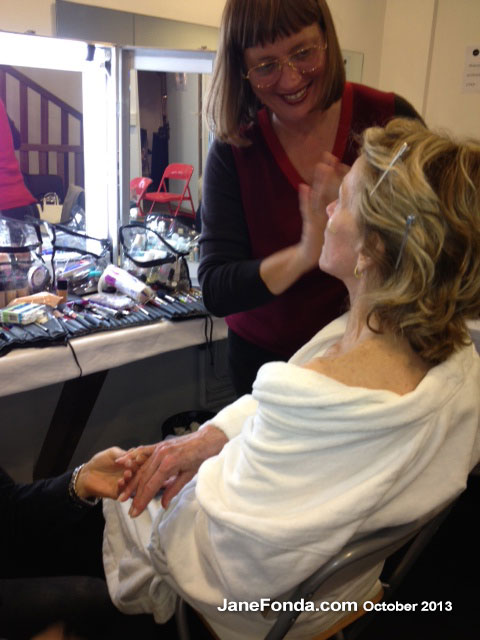 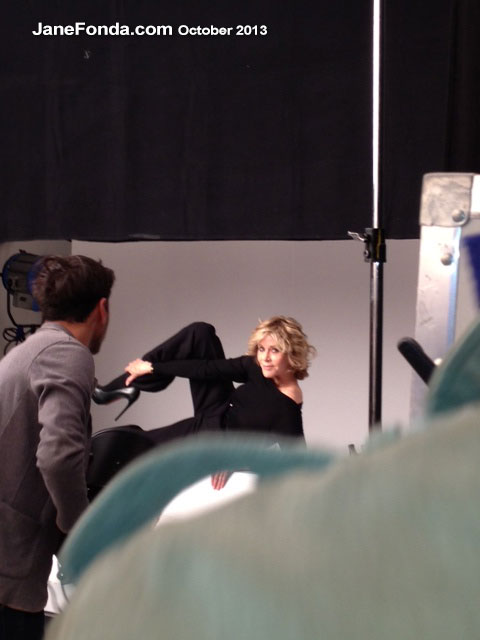 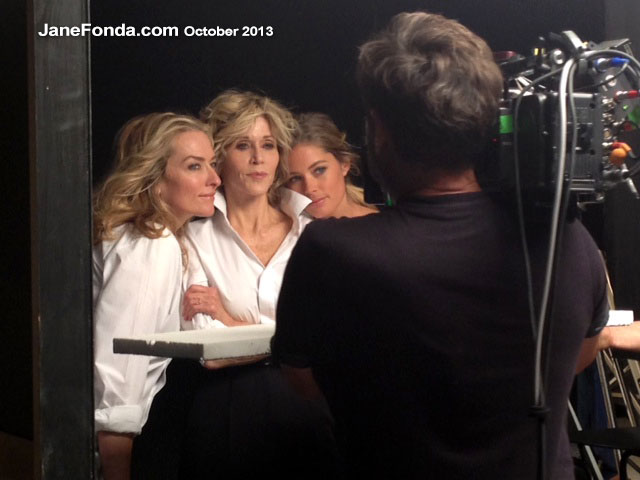 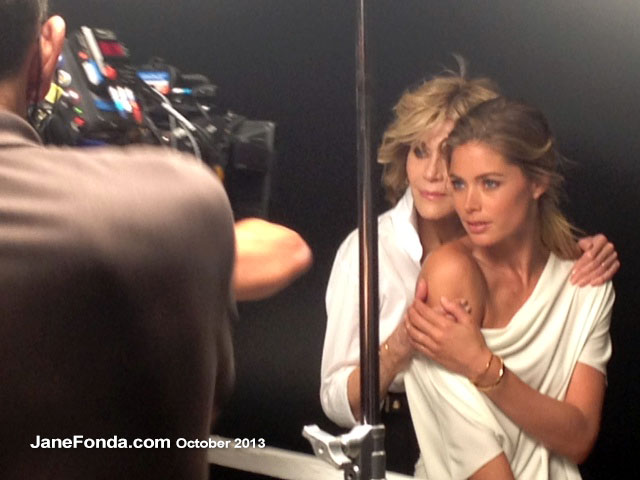 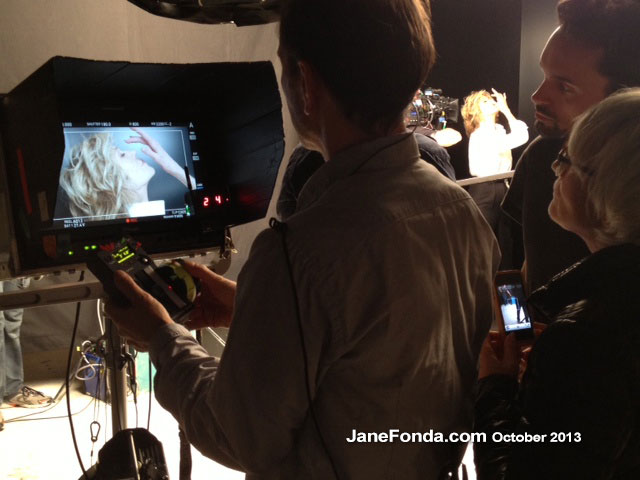 It was fun not being the only one. I liked the sense of camaraderie. And now I’m home and only slightly jet lagged though swamped with work when all I really want to do is write my novel.