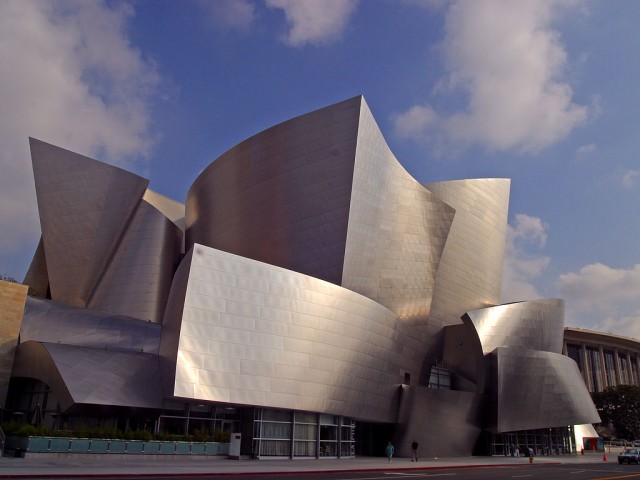 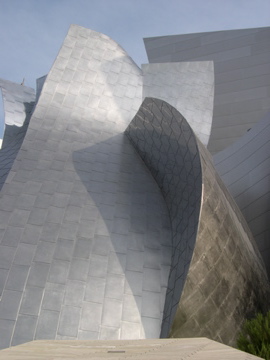 A few evenings ago, Richard and I attended the 10th Anniversary of the Walt Disney Concert Hall in downtown Los Angeles designed by the great architect, Frank Gehry who was being honored.

I will go anywhere to honor Frank Gehry but what made it even more special was that the L.A. Symphony’s Music Director, Gustavo Dudamel — fabulous, fiery, playful, brilliant, thirty-something Venezuelan was conducting and the great Cellist, Yo-Yo Ma, would be performing a Bach solo (Prelude from Cello Suite No. 3).
First, a word about Gehry. I have always loved architecture and, in 2000, I traveled to Spain to visit Gehry’s Guggenheim Museum in Bilbao. 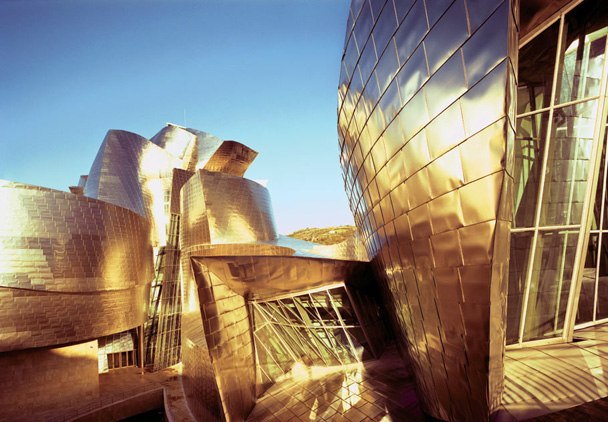 It is hard to describe the effect it had on me. This photo (above), which I Googled, doesn’t do justice to the staggering vision of the building with its waves of shining titanium rising up out of the old, brick, industrial city of Bilbao, along a river. It was the first time architecture made me cry. The shear courage and vision of Gehry’s design is breathtaking. And, by the way, it doesn’t hurt that, to get to Bilbao, we had to pass through Barcelona where many of the Spanish architect, Gaudi’s, greatest buildings are . . . this famous cathedral being but one example. 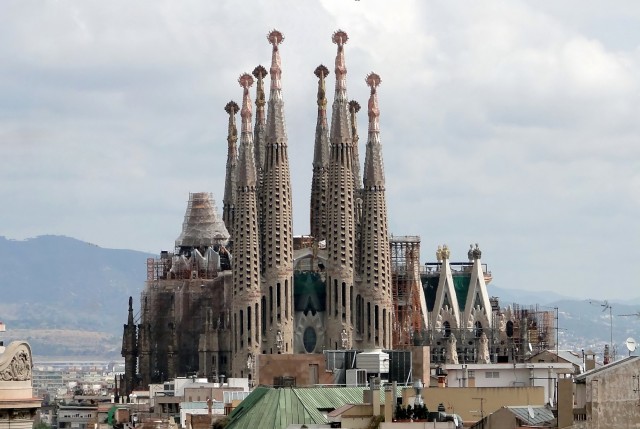 But back to Los Angeles. It was a packed house for the anniversary celebration with all of the city’s art and music lovers in attendance. The inside of Disney Hall is light wood, which gives the safe a soft, warm glow, the sides curving and rising like the hull of an old schooner and the acoustics are perfect.

I took this picture during a short break. Behind the screen you can make out the organ with grand pipes that appear to be 100 feet high. During the performance, images were projected onto the several screens that hung from the ceiling. Sometimes they had images of the models Gehry created in designing the hall. During the breaks between musical pieces, statements by Frank Gehry were projected with his voice speaking the words. Many of us wish we were taking notes because his words were so true of all great artists. 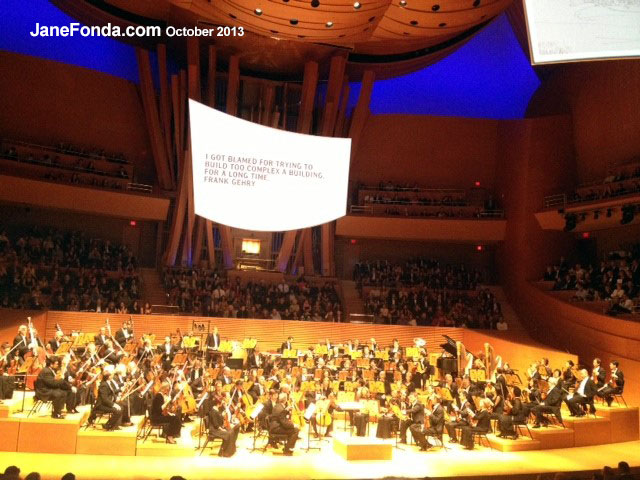 The feeling that he had gotten it all wrong; the time he was fired because the consensus was that his design wouldn’t work; the self-questioning; the mounting costs of storing all the models. His humility and honesty was very moving. I had to photograph this quote of his which was projected on a wall in the entry way. How I identify with what he says! 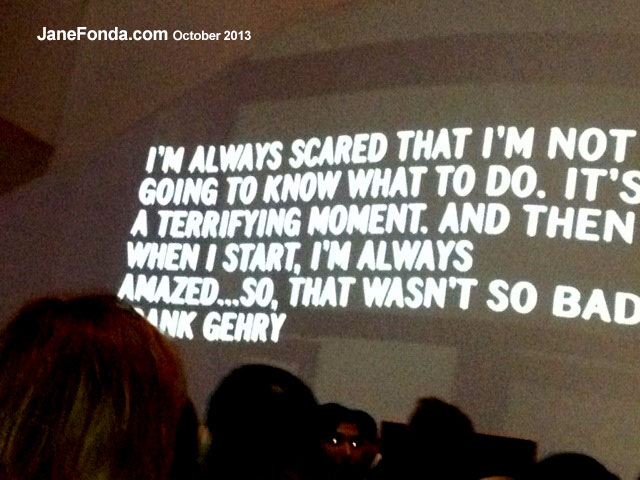 There was enormous excitement and anticipation in the hall as Dudamel made his entrance, took his first bow, acknowledged Gehry in the audience, turned and took his position on the conductor’s stand. A moment passed, then he lifted his arms to begin and the musicians lifted their instruments . . . poised, waiting, silence, held breaths, he’s focusing his energy, a minute goes by, nothing, he lowers his arms and the musicians lower their instruments. Waiting, we see him taking deep breaths. He must not be quite ready. More focus must be needed. He lifts his baton again and the orchestra follows suit . . . hold . . . hold . . . another minute or more, and he lowers his arms again. By now, at least three minutes have elapsed. Richard looks over at me with a quizzical, “what’s going on?” expression. I whispered to him, “just think of it as Tantric sex.”

Once again, for the 4th time, Dudamel lifts his arms, holds, waits and then, turns to the audience and bows. Of course! Duh! I glance at the program (which I should have done to begin with). It was a performance of the controversial, experimental composer John Cage’s 4’33” It was composed in 1952, “for any instrument or combination of instruments, and the score instructs the performer(s) not to play their instrument(s) during the entire 4 1/2 minutes” as Cage believed the sounds of the environment –of ‘silence’–that the listeners hear, constitutes music. (Cage was studying Zen Buddhism at the time).

I was thrilled that for the important evening’s opening number, Dudamel had chosen to have fun outside the box.

The final performance was Saint-Saëns Symphony No. 3. “Organ” and for the first time for many of us, we heard the powerful organs sounds. Everyone was talking about it later in the ladies room where, by the way, I ran into Julie Andrews whom I hadn’t seen in decades. What a beautiful woman she is, inside and out.

It was a perfect, inspiring evening!