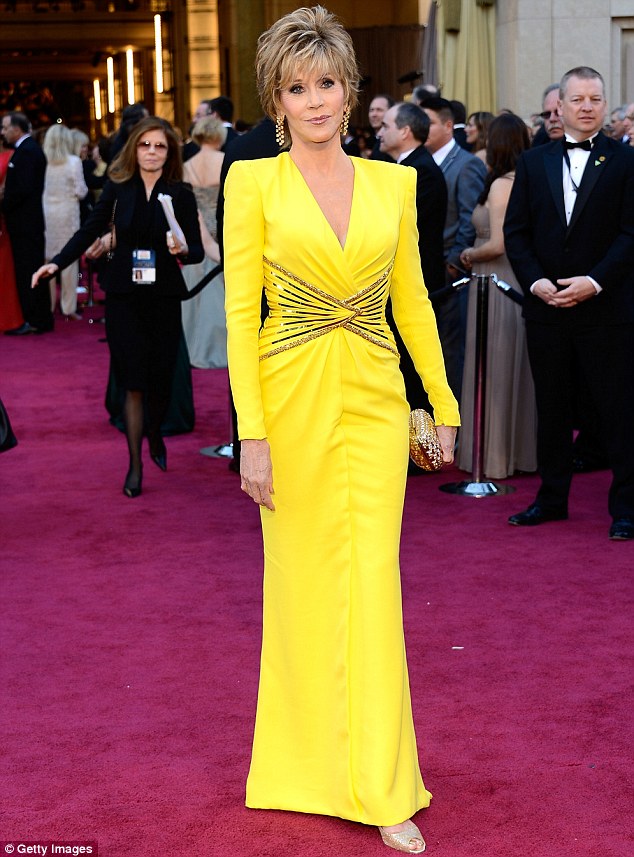 I was only asked to present Best Director with Michael Douglas about 10 days ago so preparations were very rushed. Donatella Versace sent me a sketch, I liked it, and last Fri (2 days before the Oscars) a tailor came from Italy with the partially made dress and they finished it on me with only one more final fitting on Saturday. I wanted yellow, although they called it ‘chartreuse’. I’ve always liked yellow. It’s a happy, fresh color and I knew no one else would wear anything close to it. Normally yellow is said to be a ‘no-no,’ but I felt I could carry it off. I’ve worn yellow once before to the Oscars when I attended on Ted Turner’s arm. I liked the deco style of the waist band and the structured shoulders and the chandelier, yellow Chopard diamond earrings. The feed back I’ve gotten makes me feel it was a good choice but then maybe my friends kept the negatives away. We taped the show and when we got back, I watched my presentation and thought it photographed well, too. What do you think, dear readers?

There was much about the Oscars that I really liked. Let’s start with Charlize Theron dancing with Channing Tatum. Is there anything that beautiful creature can’t do?! I so admire the women who do it all: act brilliantly, sing, and dance…I’m thinking Charlize, Anne Hathaway, Amy Adams, Nicole Kidman, Catherine Zeta-Jones, and, of course, Meryl (Mama Mia!). And how about Zeta-Jones doing that song and dance number from the film “Chicago” which, as Michael reminded me, she did TEN years ago! She doesn’t seem to have lost a thing along a way and a lot has happened in her life along the way. Brava to her. Michael looked great and was as funny and charming as ever

I loved Shirley Bassey belting out “Goldfinger”, and Barbra, and Adele and what seemed like the whole cast of “Les Miserables” all together.” That was very dramatic and moving. 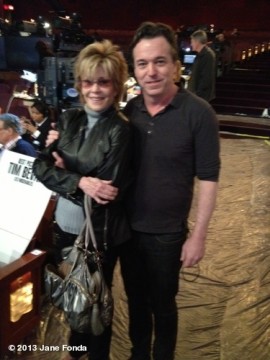 I ADORED the set. It was glamorous, fairyland-like, flexible. Perfect. loved the effects behind Adele while she was singing although from home you didn’t really see it quite the way we did there in the hall. Everything was designed by my friend, Derek McLane who also won a Tony for his sets for my play “33 Variations”.

I LOVED that Quentin Tarantino won best original screenplay. I was happy that “Argo” won Best Picture (and that Michelle Obama presented it). There were so many truly wonderful, unique films and actors nominated this year and many of them, I felt, should have won, but out of respect for those who did win and they were also brilliant, the only name I will say here is Robert De Niro. I wanted him to win so badly. And I did adore “Silver Linings PLaybook” so much I’ve seen it 3 times.

What I really didn’t like was the song and dance number about seeing actresses boobs. I agree with someone who said, if they want to stoop to that, why not list all the penises we’ve seen? Better yet, remember that this is a telecast seen around the world watched by families with their children and to many this is neither appropriate or funny. I also didn’t like the remark made about Quvenzhane and Clooney, or the stuff out of Ted’s mouth and all the comments about what women do to get thin for their dresses. Waaaay too much stuff about women and bodies, as though that’s what defines us.

I can say this: I’ve been to more Oscars than I can count and it never gets boring. I am still thrilled to see all the amazing talents there, in flesh and blood.

After spending a little time in the green room backstage with Meryl and Barbra and Donna Karan, I did what Ive never done before. It felt very movie-starish: I changed into another gown, a spotted black and white Reem Acra which was very comfortable. 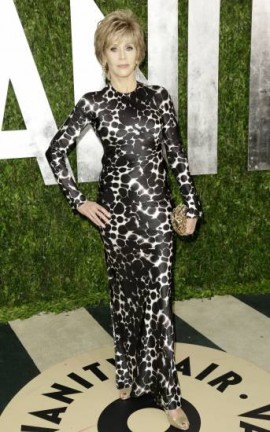 Richard and I went to the Vanity Fair party and got there before the real crush happened so we found banquette seats where we stayed the whole time and chatted with various fun people as they came by: Quincy Jones (my cousin), Naomi Campbell, Larry Gagosian, the famed art dealer. I had a fascinating talk about violence in America with Canadian, Martin Short. (Canada has just as many guns per capita and watches just as many violent video games but, like the Netherlands, has much, much less violence. I won’t go into it now but it has to do with people feeling respected and cared for by their government. If the cuts go through this Friday, you’ll see violence go up in the U.S. I’ll bet on it)

After that we went to George Clooney’s much smaller party where I had a most enjoyable, interesting, uplifting one-on-one with George. In a few days, I must remind him of it cause he may well have forgotten. And–we got to congratulate Ben Affleck (sans beard…he obviously was a quick-change artist himself) for his much-deserved Oscar.

Got home much too late given that I’ve had a cold for a week or more, but it was worth it.