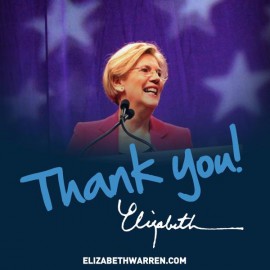 Women claim the last word in the “war on women” election this year, with 55 percent backing Barack Obama and many progressive women winning House and Senate seats.

Women won record numbers of seats in Congress in the 2012 elections and voters sent a strong message that kidding around about rape will not be tolerated.

The election was vindication for dozens of women’s groups who formed a bipartisan effort more than a year ago to recruit and groom more women to run for office this year. This was a rare year of opportunity to elect more women: the first election after U.S. House districts seats were redrawn to reflect new Census data – creating dozens of seats with no incumbents – and a presidential election year, guaranteeing much interest and energy in the elections.

A record number of 18 women ran for the U.S. Senate, according to the Center for the American Women in Politics (CAWP), an increase of four from the previous record in 2010. The record of women running for the U.S. House also was broken, with 166 women running compared to the past high mark of 141 in 2004. This time, unlike in past years, a significant number of women won. With a few races still being counted, at least 76 women won House seats (56 Democrats a 20 Republicans), and there will be 20 women in the Senate (17 Democrats and 3 Republicans).

Democrat Elizabeth Warren easily defeated GOP Senator Scott Brown in Massachusetts. Brown had been an upset winner two years earlier to fill the seat held by the late Ted Kennedy. He campaigned then from a battered pickup, but the folksy touch didn’t work when he taunted Warren, who gained great popularity as a consumer advocate during the financial crisis, as being an out-of-touch Harvard professor.

click here to read the rest of the article