I didn’t work on Tuesday so, with the help of my sweet and knowledgable driver, Melanie, I took advantage of the free time to explore places I ‘m interested in. As those if you who follow my blog know, I love Cemeteries–old, colorful ones especially. New Orleans has great ones. I think because there’s water close to the surface of the land, the graves are all above ground, which is what makes it so interesting. The port city of Buenos Aires in Argentina has a cemetery like this as well. 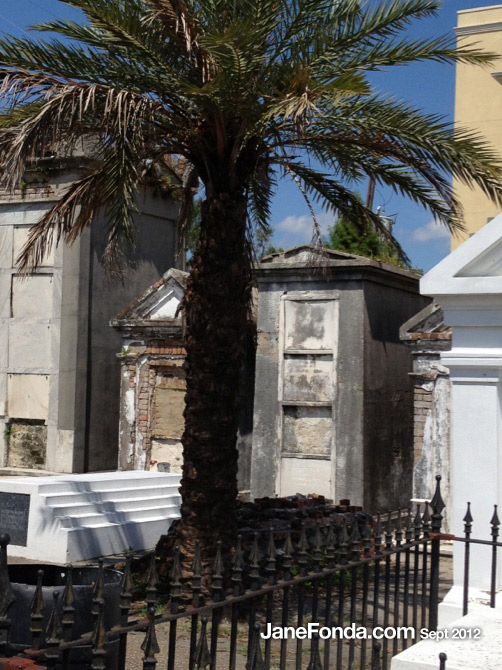 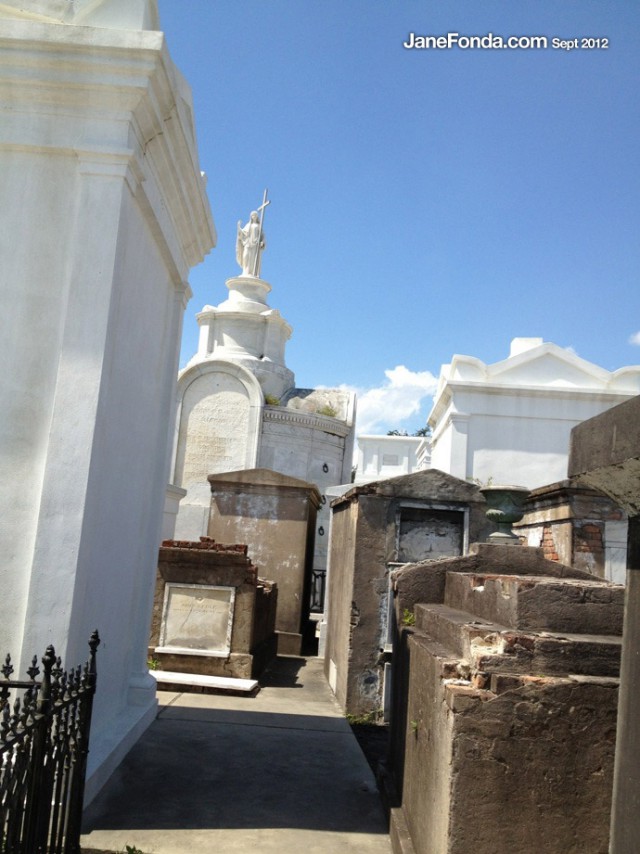 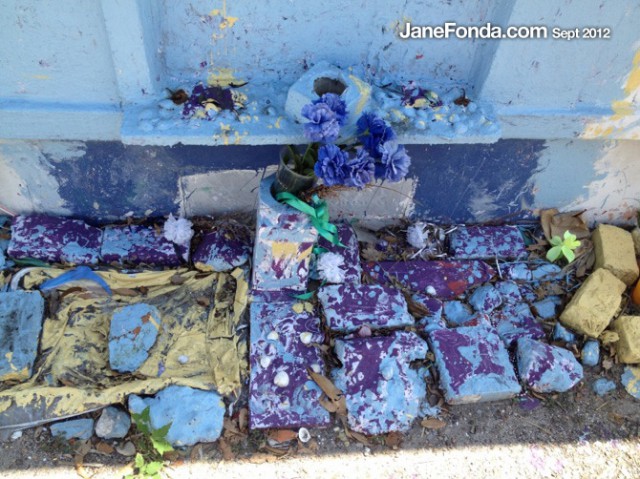 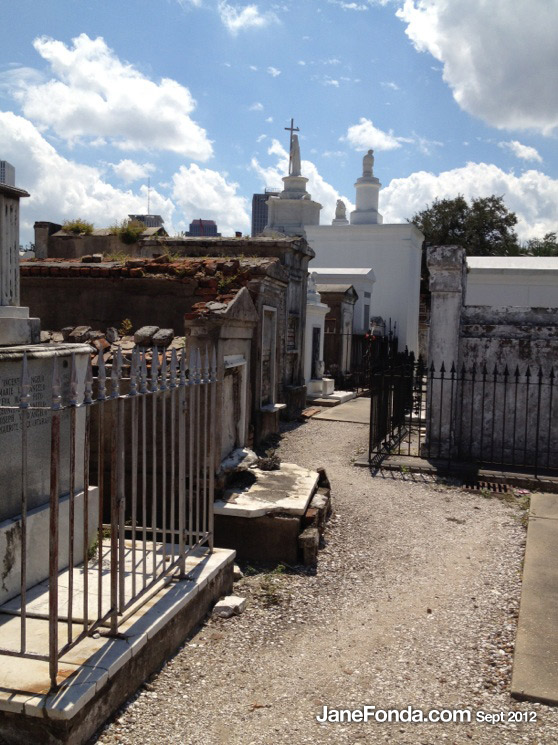 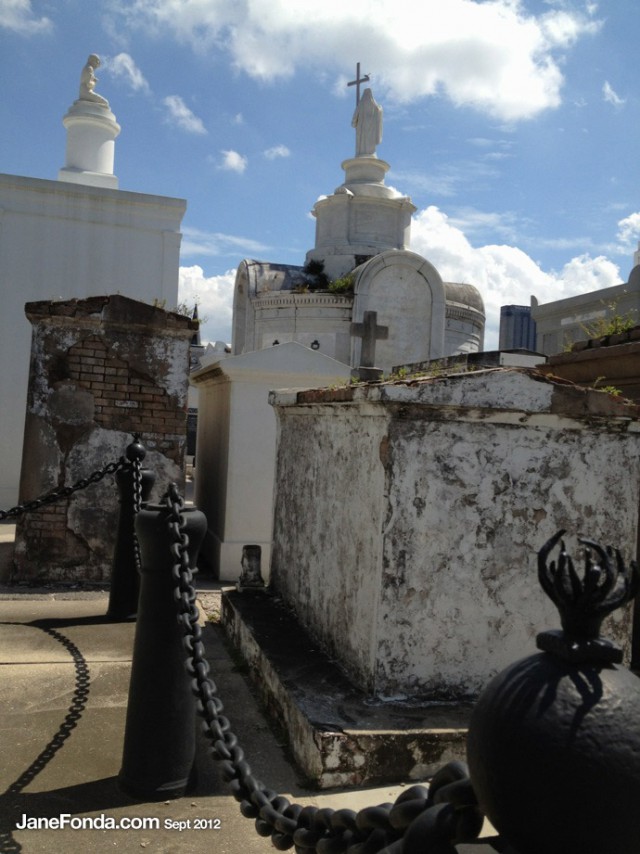 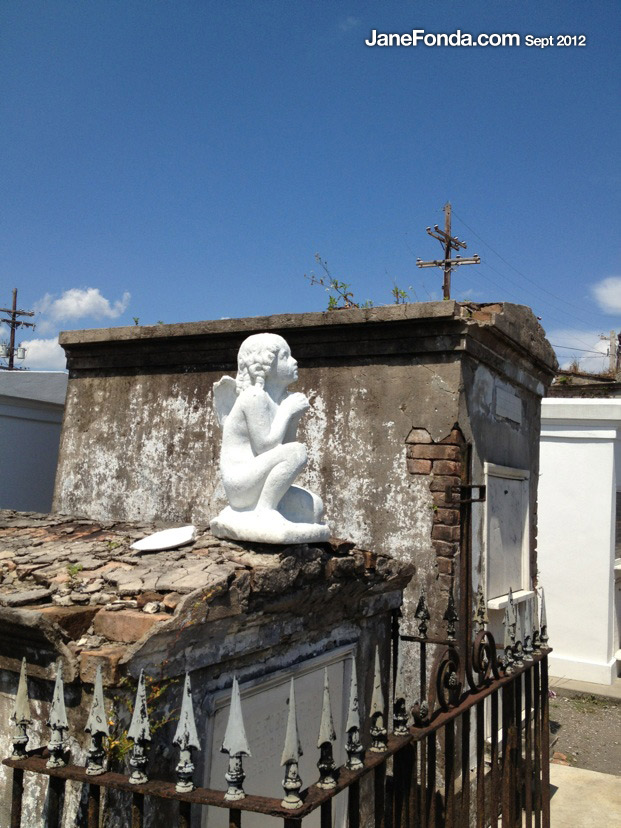 I wanted to see what the Superdome looked like now. 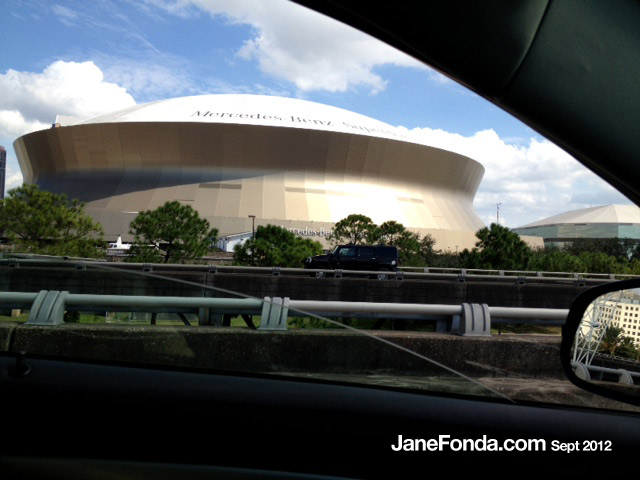 Several months after the Katrina disaster, V-Day, Eve Ensler’s global organization to stop violence against women and girls, took over New Orleans’ Superdome where people had taken shelter when their homes were destroyed and where so many women were abused, raped and otherwise traumatized. V-Day wanted to ‘cleanse’ and de-traumatize the Dome. We had performances of all kinds, poetry, dance, gospel singing, speeches, an original play, “Swimming Upstream”, which evolved from stories and interviews Eve did with women who ‘d been through the storm. On the Dome’s 2nd floor, Donna Karan set up all sorts of healing therapies –massage, acupuncture, psychological therapy, story telling—for the women, many of whom came back from far away places they ‘d fled to and entered the Dome for the first time since the violence. It was intense and, ultimately healing. Money that was raised went to local efforts run by and for women in New Orleans. As you can see, the exterior of the Dome has been redone and it’s renamed the Mercedes Superdome.

From there, I went through the colorful, bustling French Quarter. 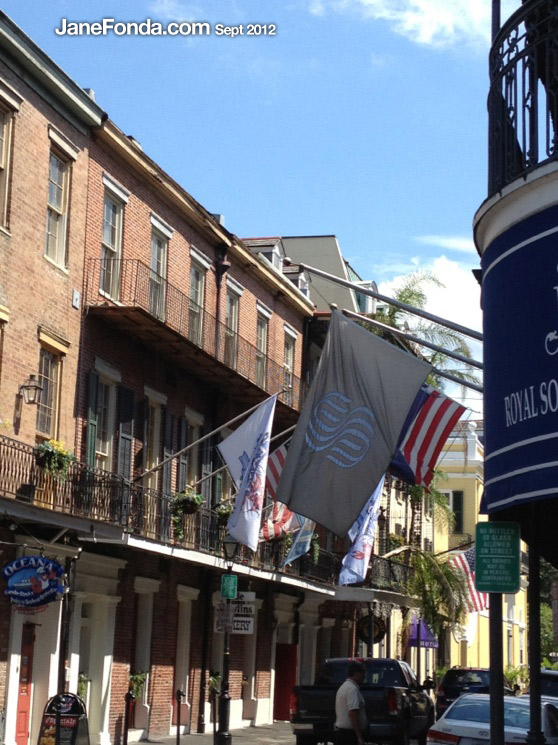 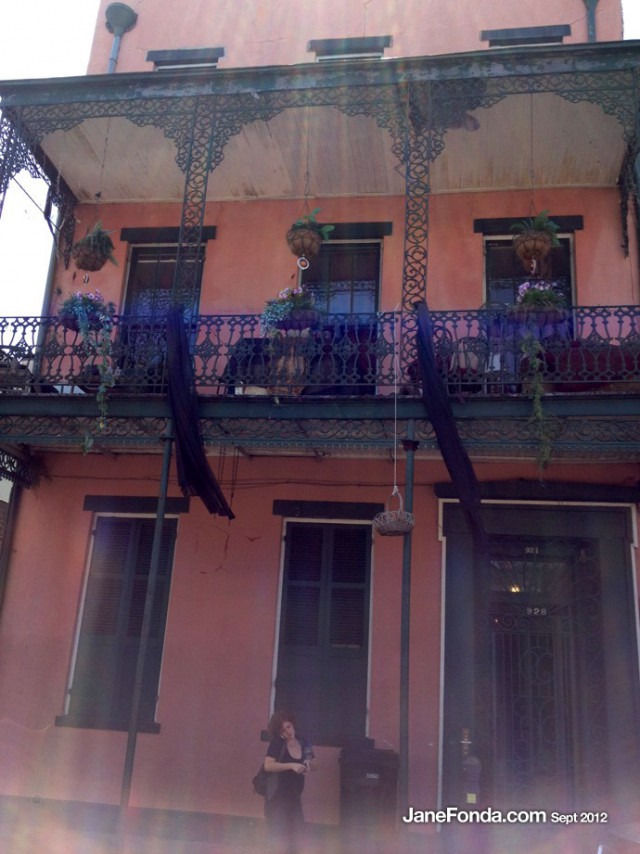 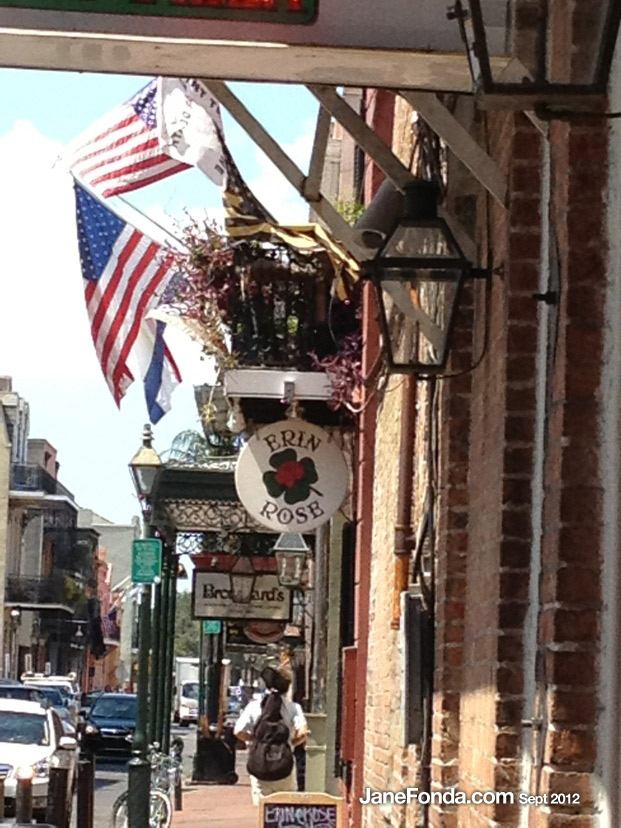 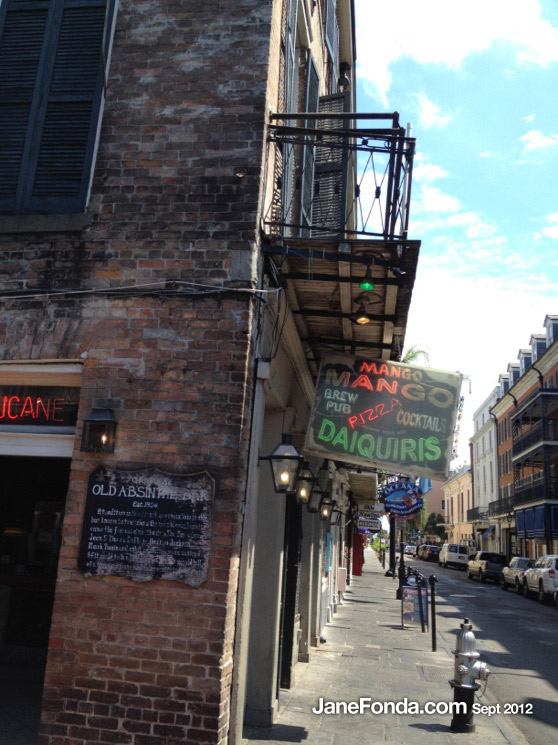 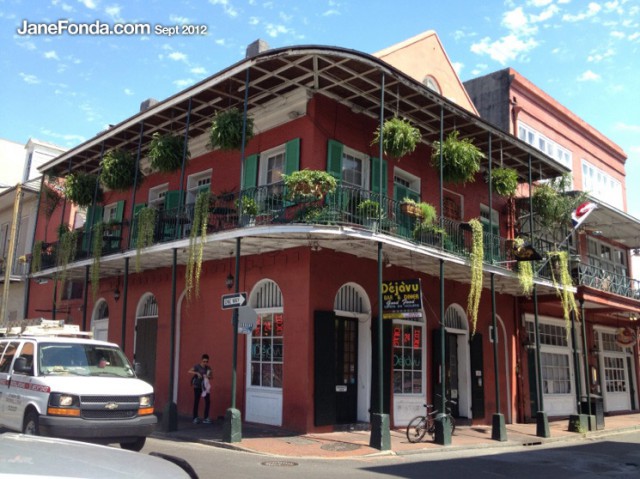 Then I had Melanie drive to the Lower Ninth Ward. The Superdome may have been refurbished, but not the Lower Ninth. I visited there with Donna Karan after our events in the Dome post-Katrina. We talked to many people then who had stayed after the flood. It seemed quite clear that, except for efforts by various non -profit groups, there would be little help coming either from city, state or federal agencies. It seemed the powers that be wanted to force people out. A few told us that they were expected to pay large fines–hundreds of dollars– if they neglected to mow their yards! The folks in the Lower Ninth owned their homes–many of which had been in families for generations. They had no insurance. Their homes were their only assets. There are still so many ruins, empty lots, foundations with nothing on them. People may want to come back, but they’ve started new lives elsewhere and there’s no incentive to come back. 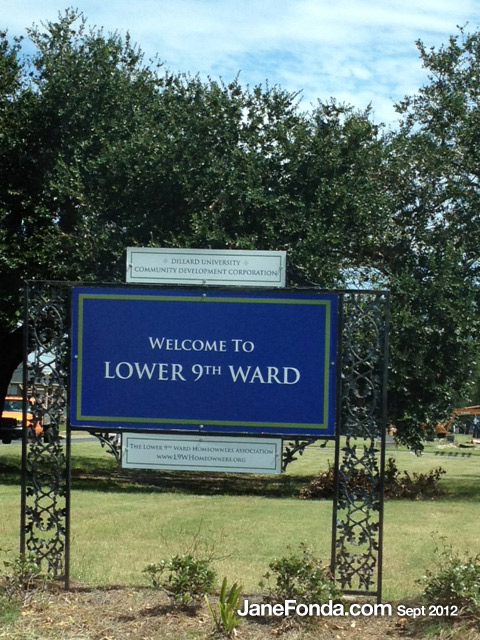 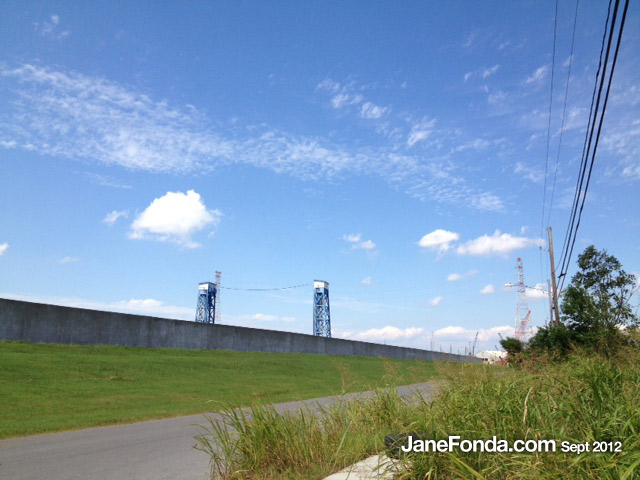 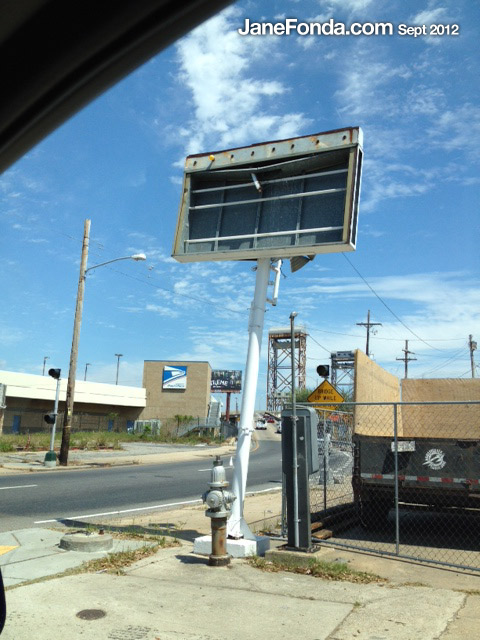 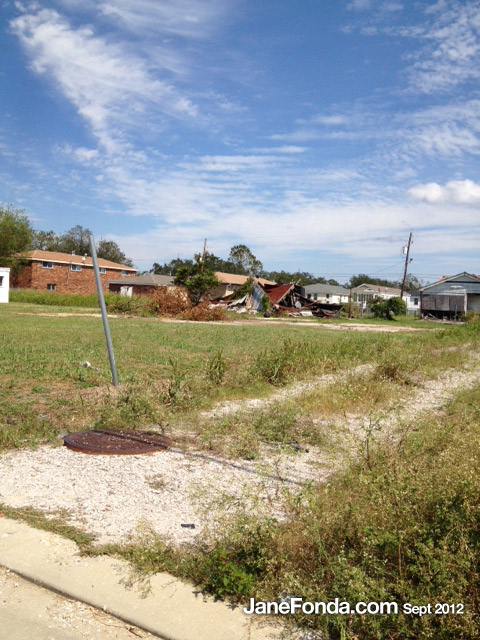 But, then there are the homes that Brad Pitt has built through his non-profit “Make It Right.” They are all solar, hence less expensive to maintain, sustainable, built to last. And these are not cookie-cutter Homes. Each is different, with it’s own personality. It is moving to see what his efforts are doing–I say “doing” because they’re still building. There are workmen, tractors, bulldozers everywhere. People i ran into there seemed very happy. That morning there was a news story about Angelina Jolie –in her capacity as special envoy for the UN High Commission on Refugees– visiting refugee camps in Jordan filled with Syrians who have fled the violence there. And I thought how much good this remarkable couple does locally and globally. 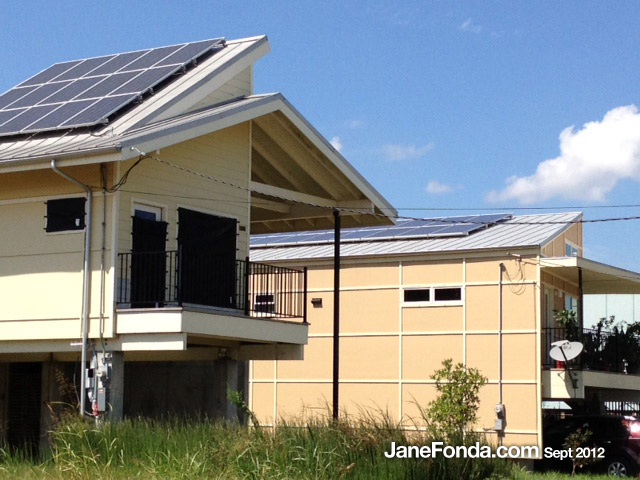 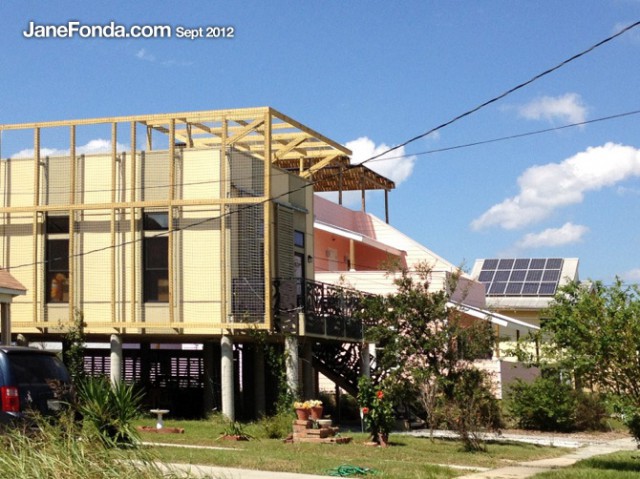 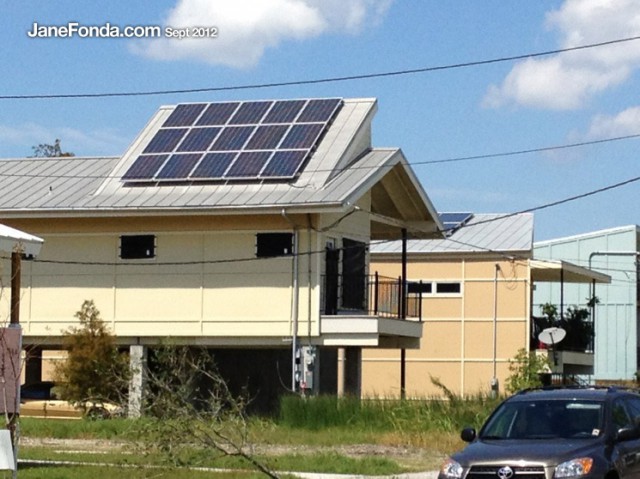 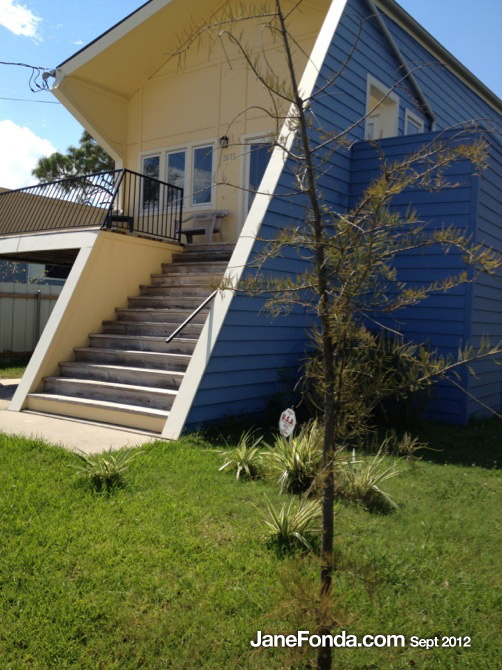 Since the workday began late on Wednesday, I arranged a meeting with Carol Bebelle, co-founder and executive director of the Ashe Cultural Arts Center which i had become familiar with during the post-Katrina events in the Super Dome. Carol is a true leader, fierce,smart,articulate. The Center creates and supports all kinds of artistic activities and projects that give life, cohesion, identity and work to the diverse population in the “hood” of New Orleans. It has become a template, showing how–through art– you can turn a community around, which is why it is supported by major foundations such as Kellogg, Cox, Open Society, Nathan Cummings.

I had hoped Carol could come visit “The Butler” set (i wanted her to meet Oprah) but she was super busy and had to pass. 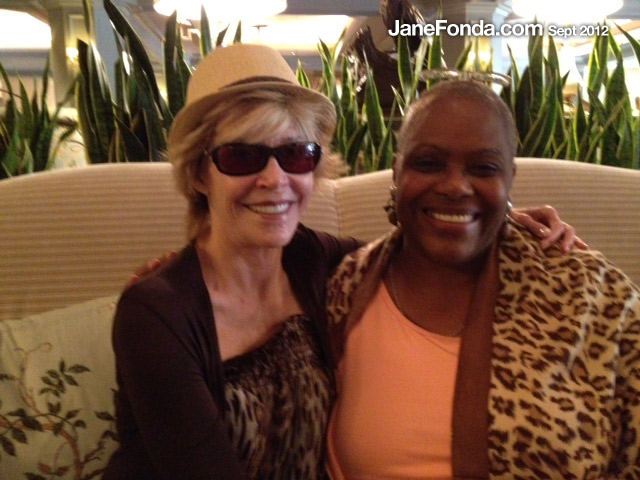 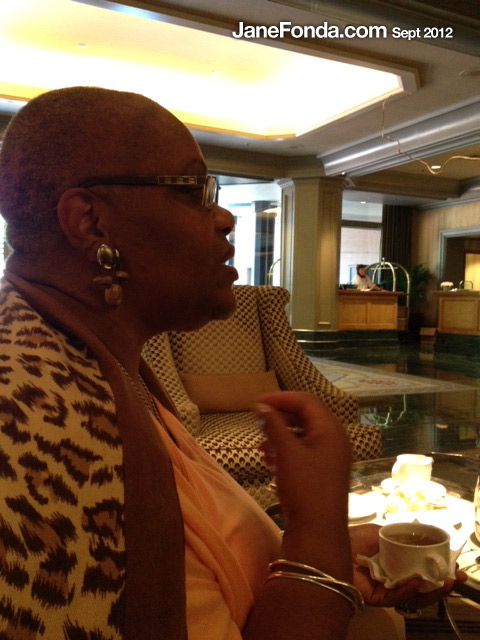 At an auction supporting Morehouse School of Medicine I donated “A Day On The Set With” (me). Ted’s wonderful daughter, Laura Turner Seydel, won the bid and was there to fulfill the pledge. Laura brought me a copy of “Seasons” a major Atlanta magazine with Ted on the cover and a big article inside that gave a nice plug to my Oct 4th annual fundraiser for G-CAPP that Ted will be a major part of: we will dialogue together about our respective work with women and girls and I’ll present him with the first Annual Big Thinker Award. More info on the event can be found at: www.gcapp.org/empower . Laura also has an article she wrote in the magazine. Like her father, she is a major environmental activist, writing and speaking far and wide. 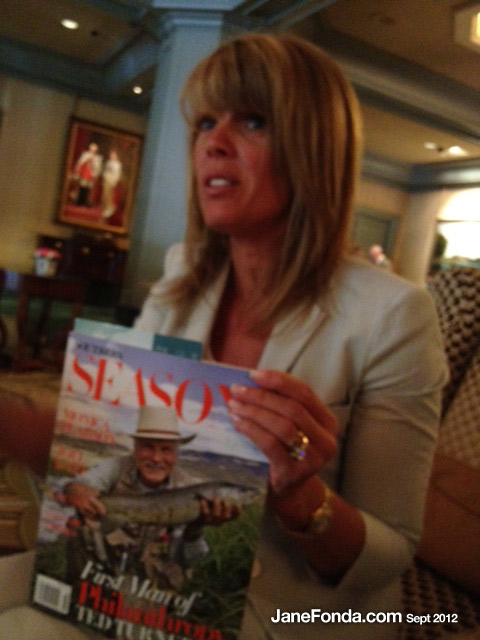 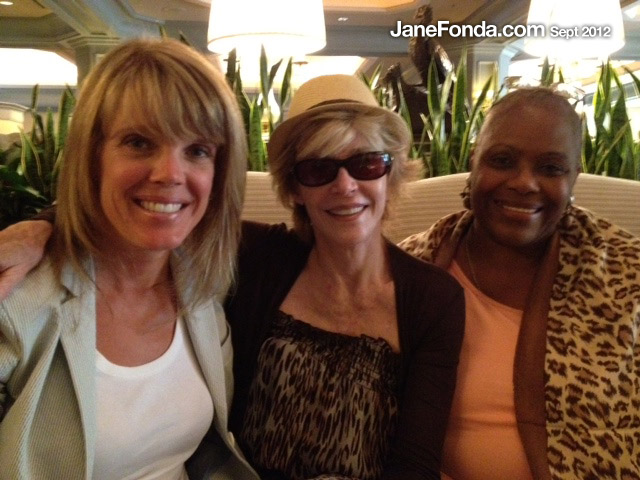 Joining Laura as an auction winner was John Archer Lundgren and his daughter. John bid last fall at the “Peace, Love and Misunderstanding” fundraiser in Atlanta. I sent the 3 of them to the landmark Commander’s Palace for lunch while I got into wig and makeup and then they came to the set and watched us film the State dinner with Oprah, and all the other stars.

We had an Hour during the 10pm “lunch break” so I rushed my guests back to Sylvain, the French Quarter restaurant I went to with Hilary to have the Brussels sprouts salad again. Yum. I also had delicious fried eggplant.

Now I”m back in LA with fond memories of my NOLA experience–all of it: the actors, the crew, Lee Daniels, Hilary Shor, the food, the vibe…I could live there easily (if I was 30 years younger!)

Share This Post
Previous ArticleMY TIME IN THE BIG EASY FILMING “THE BUTLER” PART 1Next Article40TH ANNIVERSARY OF “KLUTE”! – NEW YORK CITY
You May Also Like 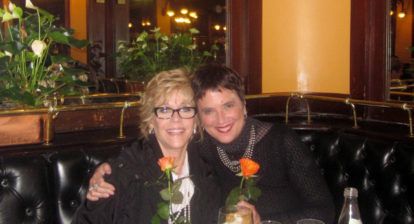 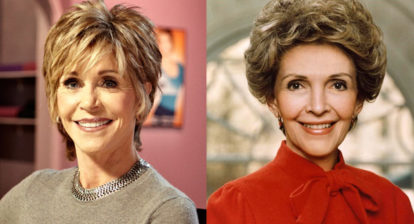 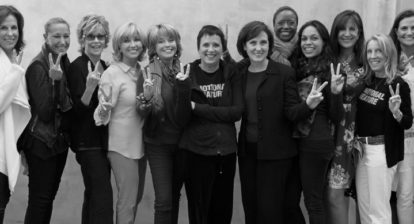