I got here on Saturday and Hilary Shor, one of the producers of “The Butler,” took me to the gorgeous old New Orleans home in the Garden District, where our director, Lee Daniels, is staying. It is a breathtaking house but I was not allowed to take photos except for details of the unique crown moldings in the ceiling. Outside, the intricate old wrought iron grill, such a trademark of old New Orleans, was jaw-droppingly gorgeous. 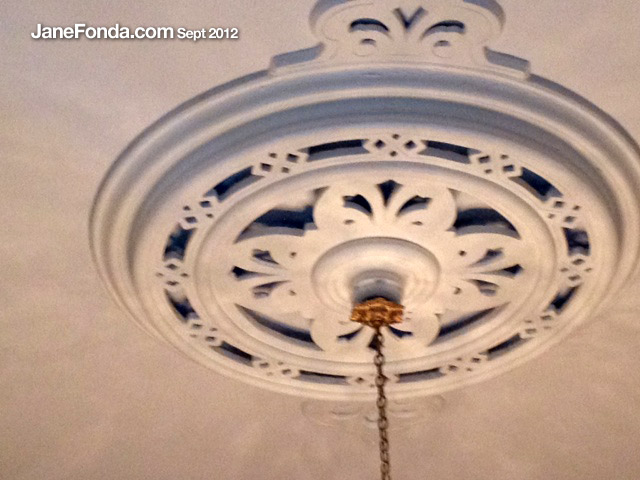 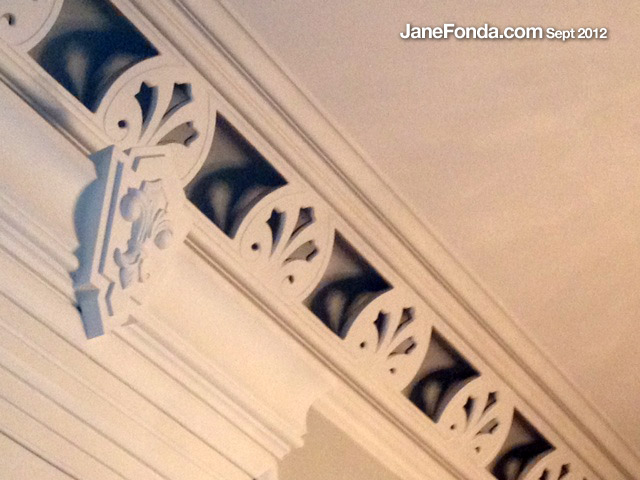 Many members of Lee’s family were there and we all went to Coquette, a superb New Orleans restaurant in the Garden District for dinner. 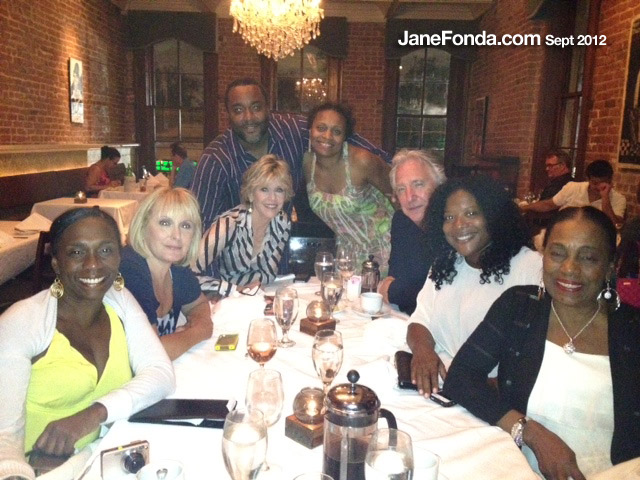 A word about Lee (though he warrants a book!): We’re all unique, I know, but Lee Daniels is more unique than most! He is brilliant, flamboyant, irascible, challenging, in other words, fascinating. Never wore anything but pajamas–nice ones, pressed, tasteful, but still. He said they’re comfortable and appropriate as he’s in the process of giving birth (the film). 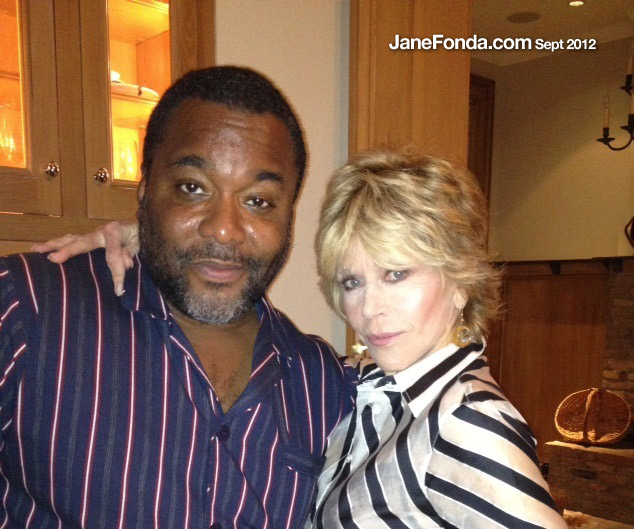 The next day I got into my Nancy Reagan hair, makeup (a 21/2 hour process) and costume–red, of course–After much scrutinizing, questioning and attention to detail, Lee finally approved the look. 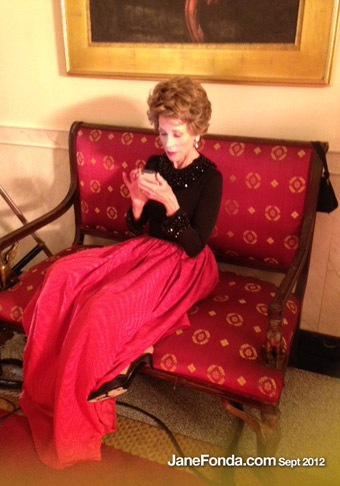 On Sunday, my first scene was with Forest Whitaker who plays the butler. In the film, both he and his wife, Gloria, (Oprah) age more than 40 years and were in their 80s by the time of the Reagan Administration. I found it very moving to look up into Forest’s aged, soulful eyes. What a superb actor he is–always. But this script –based on a true story and historical events–is particularly powerful and moving…seeing those critical events –the rise of black power and civil rights movements, cuban missile crisis among many others – through the eyes of a black butler who was at the White House serving five administrations, from Truman to Reagan.

Another thrill was acting with Alan Rickman who plays Ronald Reagan, watching his focus, seeing the results of the careful work he did to ensure he captured the essence of the president. As Hilary Shor said after watching him in his first scene, “You could sense not just the president. You sensed the cowboy, the rancher, the actor–all the facets that made up RR.” 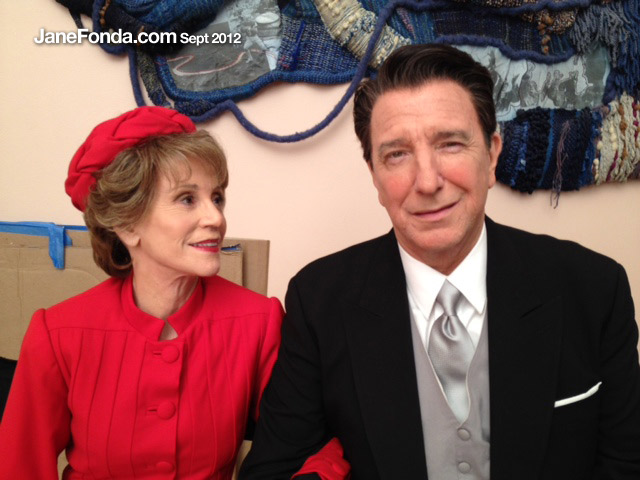 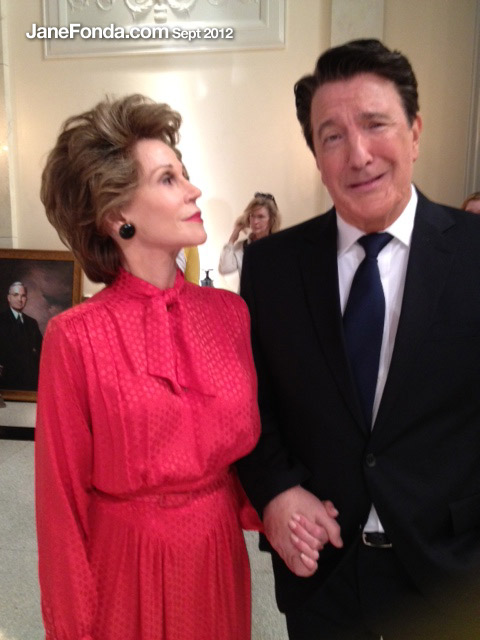 Alan gifted me with a photograph he found of Nancy as a little girl having a ‘tea party’ with her doll…already the charming hostess. I find this image very touching, especially now that I know her childhood was shadowed by abandonment –by her father and later the reluctance of her stepfather to adopt her–something she longed for. (Eventually he did, but he made her wait 10 years.) 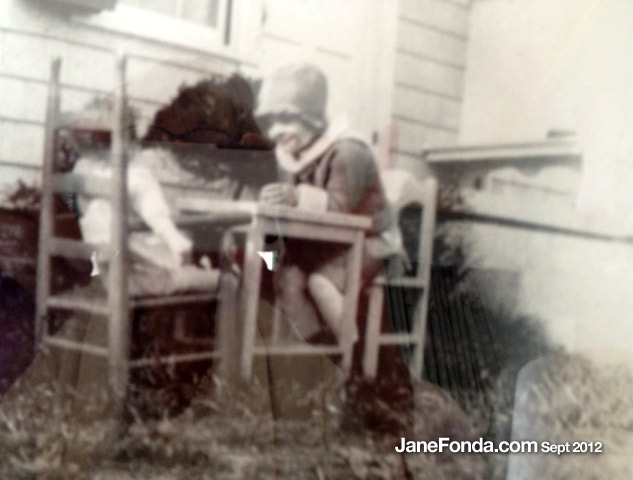 That first day we also, and unexpectedly, (the unexpected is common place with Lee Daniels), shot the Reagan’s arrival at a formal state dinner. Nancy had just invited the butler and his wife to attend– not as butler, but as guests. It was strange to be announced, step onto the landing, accompanied by Marshall music and look down onto the assembled guests in formal attire to see Oprah, just like any other extra. As her character she exuded the sense of someone who was out-of-place and out of her mind thrilled to be there. I really believed it. 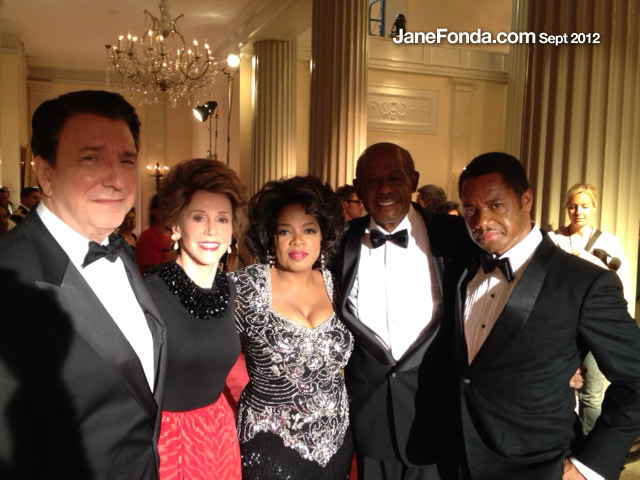 We shot that night until 11pm and I had barely enough time to take off all the Nancy paraphernalia and make it to another superb restaurant, Sylvain, in the French Quarter, with Hilary. She encouraged me to order one of the most delicious salads I’ve ever had: shaved raw Brussels sprouts, pared and diced green apples, hazelnuts, pecorino cheese, with white balsamic vinegar dressing. OMG! And it’s also healthy. The owner promised he’d send me the recipe and, if he does, I’ll post it for you.

In the small world department, turned out that Jimmy Buffett had flown into town for the Saints football game Sunday, bringing with him a beautiful guitar that he signed for me to auction off. (The Auction benefitting my Georgia Campaign for Adolescent Potential and Power, will celebrate the 40th anniversary of “Klute”, and Sandra Bernhardt will be the auctioneer! The event takes place in New York at the Darby Hotel on Oct 11th and you can find more event information here: http://www.gcapp.org/klute ) Jimmy, his pal Kino Bachellier and I had a drink together at the Windsor Court bar and caught up on stuff. He and Janie, his wife, are headed to Australia to visit their daughter who’s doing a ‘year abroad’ there. 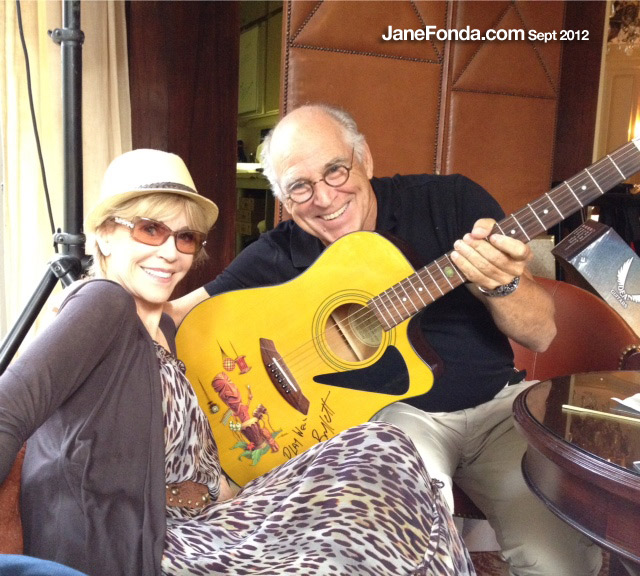 What a terrific guy Jimmy is, and amazingly fit!! I asked him if he works out and he said he stands on his surfboard and paddles with a long paddle (really challenging to the core muscles), even taking waves while standing and paddling…and he plays a lot of tennis, as well.

I enjoyed another evening out when I went to dinner at “Cochon” the famous pork place, with Lenny Kravitz and Hilary. I was impressed with how nice Lenny is. I ate too much cause it was so good–they raise and butcher their own pigs–and Lenny hardly had anything cause he’s doing a cleanse. 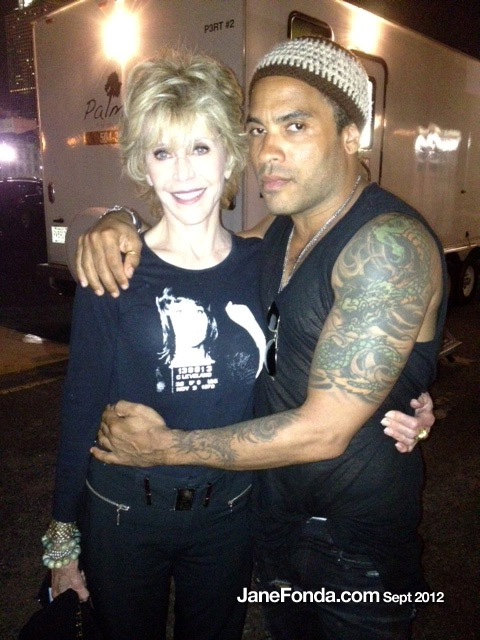 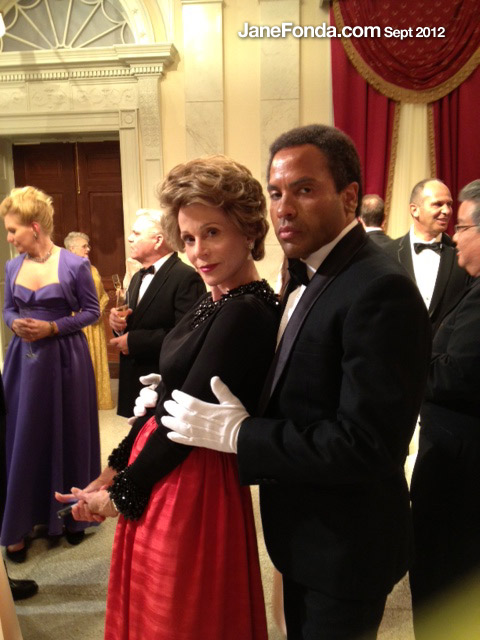 Oh! Almost forgot, I asked Oprah about a tweet she sent out a few weeks back raving about the Season 2 premiere of “BOSS“. She confirmed that it is indeed among her favorite shows! For those of you who don’t know, my son Troy Garity is on that show playing reporter Sam Miller. Oprah had not made the connection, I was pretty proud. I blogged a while back about my visit to Chicago while they were shooting the show there this summer. “Boss” airs Friday evenings on the STARZ cable network.