Hope all of the Mothers had a wonderful Day yesterday. I appreciated all of the warm wishes I received on Facebook and Twitter it means a lot. 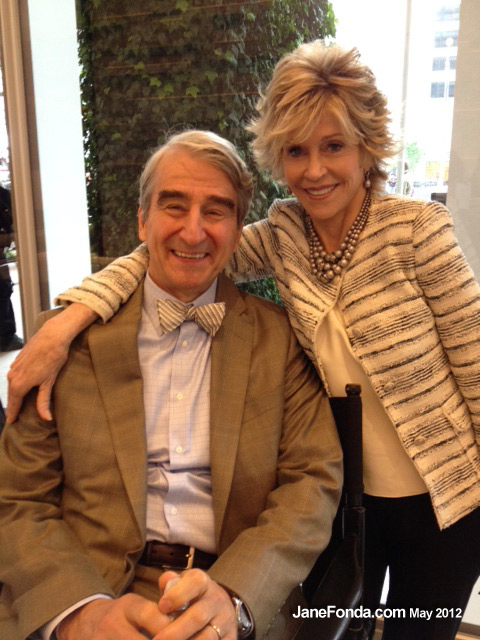 After almost 4 months of staying put, things are shifting into high gear. I went to New York to shoot a scene with Sam Waterston for “The Newsroom, Aaron Sorkin’s amazing new TV series for HBO which premiers June 24th. 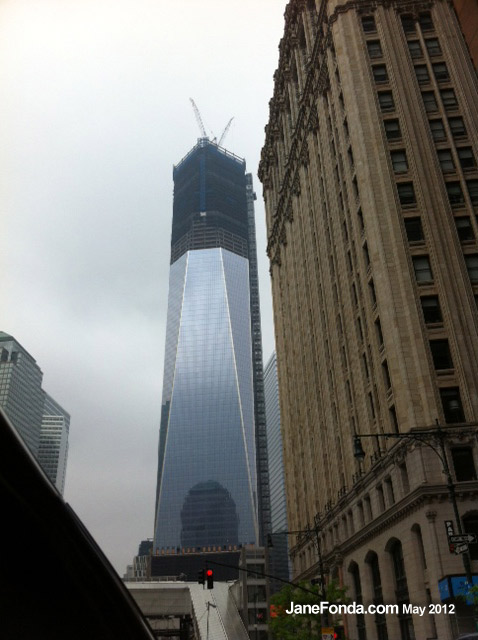 While in New York, I had to see what I could of the nearly completed One World Trade Center site and snapped this photo. Have any of you been there? What do you think?

Still in NYC I went to dinner with my pal, Robin Morgan, where we had a chance to catch up. She’s finished her stunning novel which I got to read in early stages when she was with me writing at my ranch 4 years ago. This is a HUGE deal because it is a VERY IMPORTANT novel. For those who don’t know, Robin was Dagmar in the ‘50s TV series “I Remember Mama” and was a child star second only to Shirley Temple. She is also the intellectual pillar of the woman’s movement, and one of the co-founders along with myself and Gloria Steinem of The Womens Media Center. I brought her with me to a book party that Anderson Cooper gave in his new home—an old firehouse in the Village. Lots of stairs. I could have spent the whole time on the stairs looking at the eclectic art work that covered every surface. So interesting—some family photos, portraits of Anderson’s mom, Gloria Vanderbilt, antique prints of various things like bodies, animals, plants, modern paintings. But I didn’t stay on the stairs for long cause I ran into Jason Sellards with his mom, Liam Neeson, Sarah Jessica Parker, Rashida Jones, my agent Kevin Huvane, Bryan Lourd and a host of breathtakingly gorgeous creatures I did not know. The party was for Andy Cohen’s new book “Most Talkative”. Andy Cohen is the award winning Executive Vice President of programming at BRAVO at the helm of its biggest hits including: “Top Chef”, “Project Runway” “Real Housewives” etc etc. You would recognize Andy as the host of the networks reunion shows and “Watch What Happens Live”. Quite the pop culture phenomenon! Anderson Cooper, I must say, is about the best, nicest, coolest host ever!!

So, that was New York.

I went with Richard to Barbra Streisand’s 70th and that was fun. Lots of old friends. Richard’s writing a memoir and I’ve read the chapter about the work he did producing albums for Barbra and, in the process, we listened to some of the songs he writes about–”Maybe,” “Stony End,” among others. If you haven’t listened to the Stony End album in awhile, do so. Every now and then we need to be reminded of what a truly great and deeply expressive voice sounds like. I listen and feel so proud of the work Richard does to create an award winning album. I am fascinated reading about what producing an album means in the hands of one of the very best. And Richard is one of them, if I say so myself, and across so many genres. I’m not even a music person but my favorite parts of Keith Richard’s book is when he really drills down into the music…how to create a song, how he discovered 5-string guitar playing, the nitty gritty of creating music.

Richard and I flew to Salem, Oregon to celebrate the 93rd birthday of his mom, Sylvia Perry. 2 of his 3 brothers were there with their spouses and it was a lot of fun.

Today I head to the Cannes Film Festival where I will be working for L’Oreal who is one of the key sponsors of the festival. How cool is it that L’Oreal has a brand ambassador age 74!

I know, I know, I’ve done all these interesting things and have hardly any photos. Sometimes the moment just passes. I promise I will take lots of photos in Cannes. When I return I will go to my ranch and then I’m doing one of the weirdest film appearances of my life…but I don’t know how much I can give away at this point. It will be half a day’s work in Baltimore. Very funny and totally strange. More on that later.