Friday night :
Richard and I went to the President’s birthday bash/fundraiser at the Hollywood Palladium. It was a really fun party. Jerry Lee Lewis played, and Ronnie Hawkins (President’s Clinton’s favorite musician growing up). Stevie Nicks sang—fantastically. Her voice strong as ever and her band (according to the expert, Richard}, is tops, including the great guitarist, Waddy Wachtel. 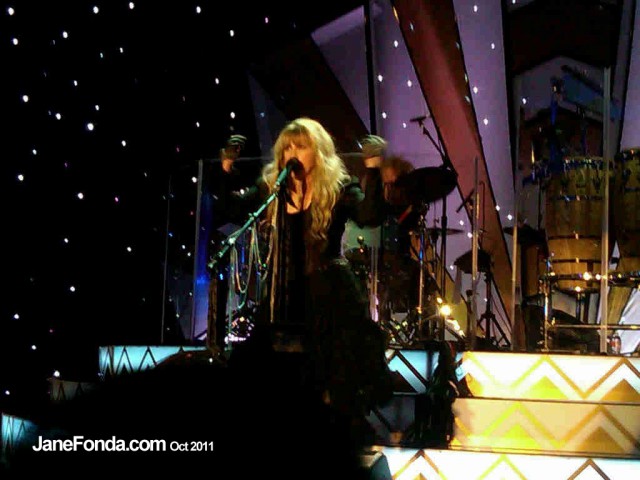 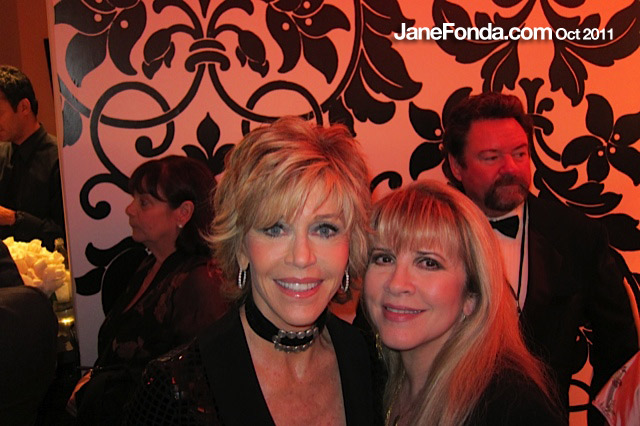 People danced and the vibe was unusually cool and fun for a fundraiser. Chelsea Clinton was especially impressive as she took the stage to talk about her father and what he is doing with his foundation. 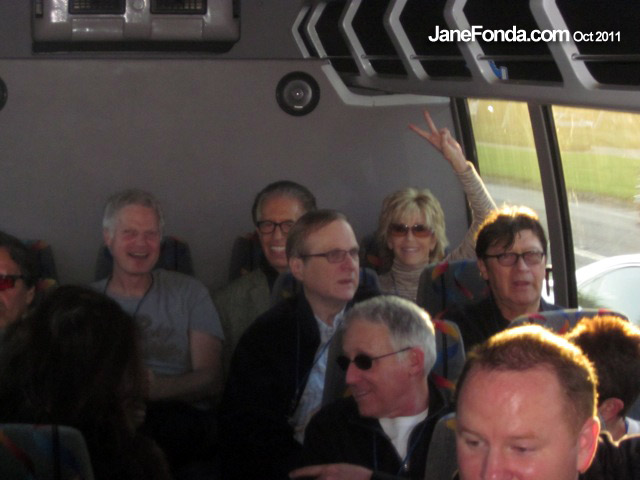 Here we are on one of the many buses taking us to the Bowl for the Clinton Global Initiative fundraiser. Steve Bing, Richard, and me in the back of the bus. Paul Allen and Robbie Robertson in front of us. Elsewhere on the bus were Bonnie Raitt, Joni Mitchell, Brian Grazer among others. 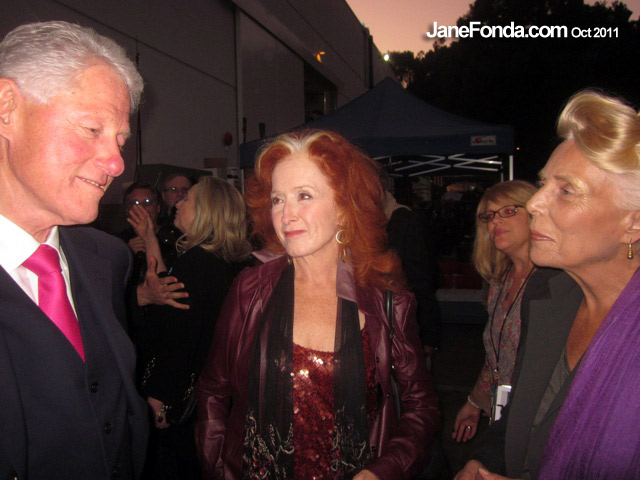 On our way into the Bowl. 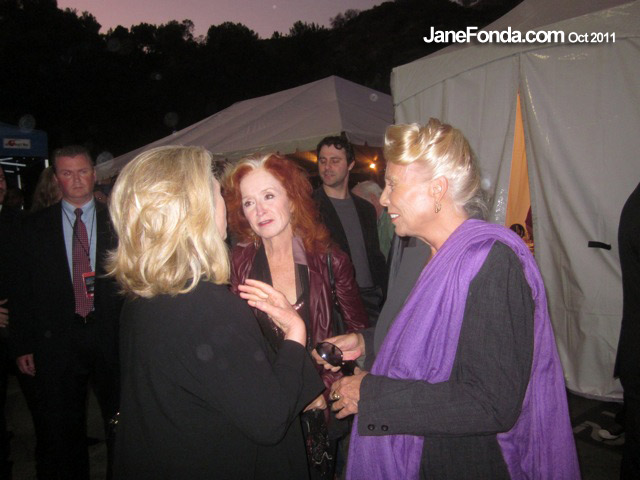 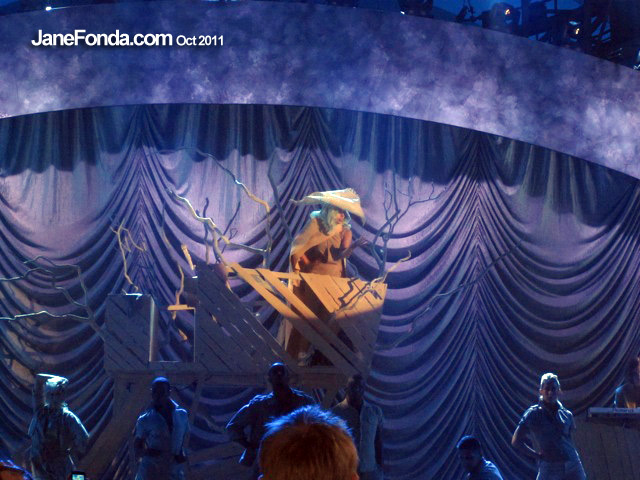 And then there was Lady Gaga. I never saw her live either and OMG what a force. Here she is at the start, up in the tree, singing to Bill Clinton 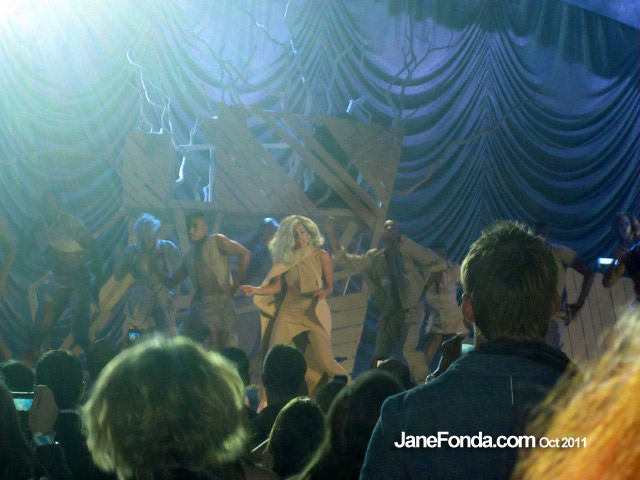 Down from the tree she came singing a sort of sexy love song to Bill C. Her "Marilyn moment" as she said, referring to when Marilyn Monroe sang Happy Birthday to President Kennedy 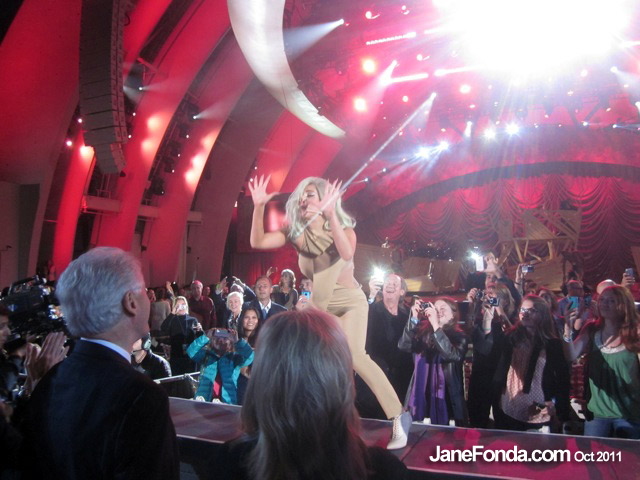 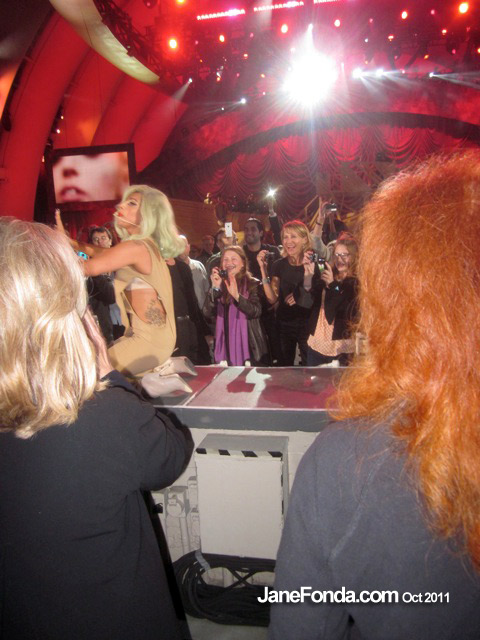 Lady Gaga right in front of us. That's Bonnie's red hair. Hard to get lost when you're with Bonnie---just look for the red. 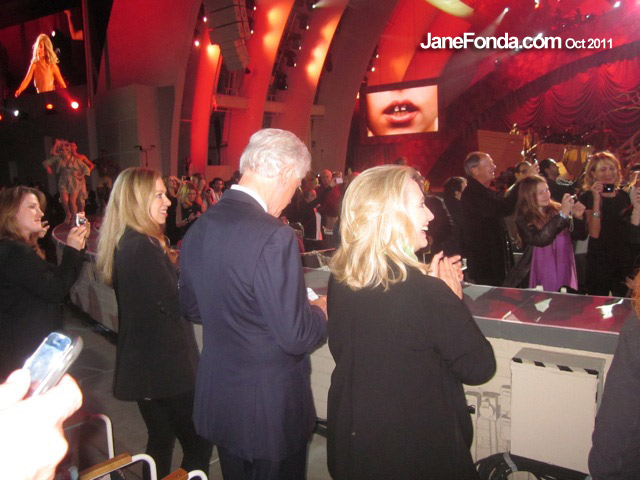 Chelsea, the president and Hillary, right after Lady Gaga moved away, but you see the image of her lips on the screen 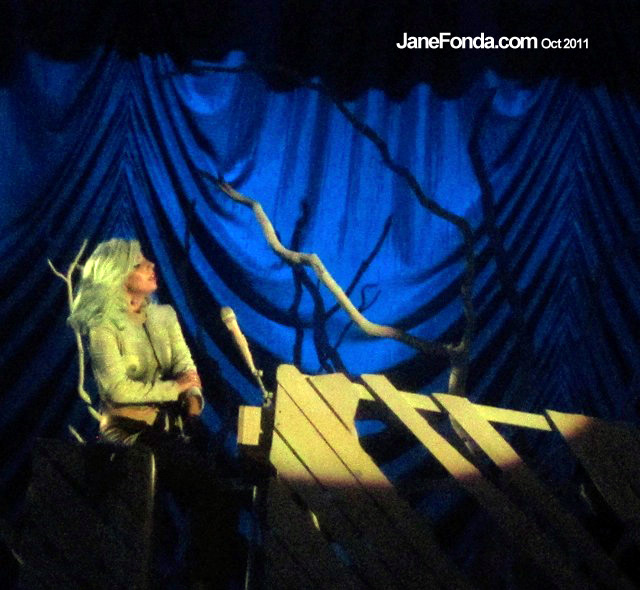 now she's back up in the tree with a top that looks like she's naked but they are breasts painted on---I think... 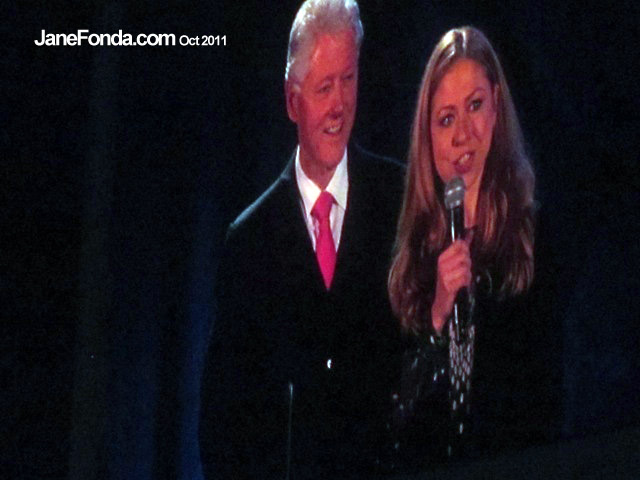 President Clinton and Chelsea together on stage about to introduce Bono. 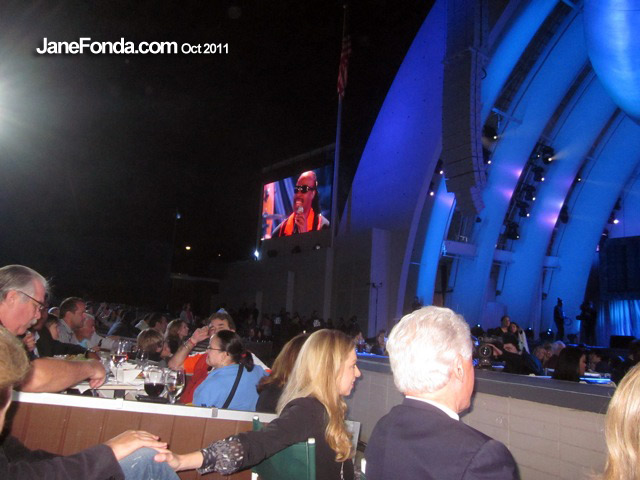 Richard, Bonnie, Joni and other friends were in the box next to the President, Hillary, Chelsea, Hillary's mother and Terry McAuliffe. Stevie Wonder opened the show. That's him on the screen 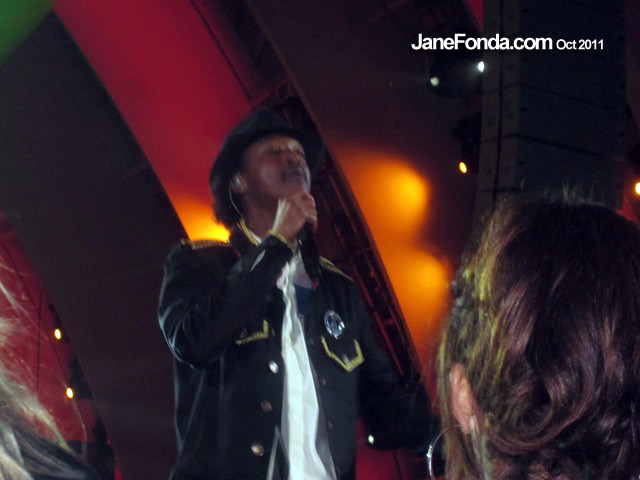 K'nane from Somalia met the President when the singer was a little boy. The President told us almost all the other children who he was with are dead. His singing was very sweet and touching. 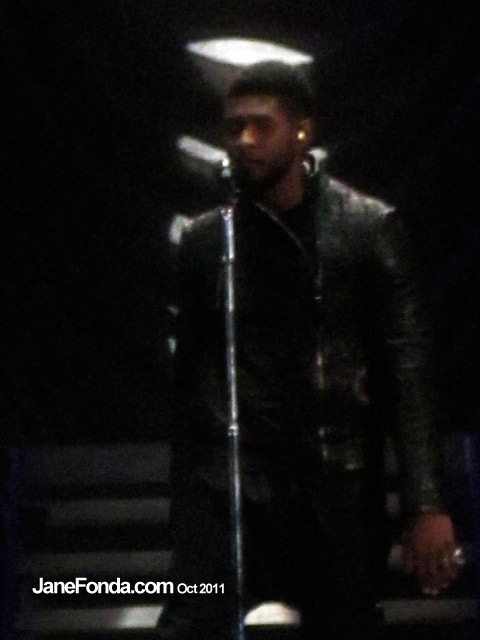 I wish I'd gotten better pictures of Usher. I'd never seen him perform live and he was astonishing!! 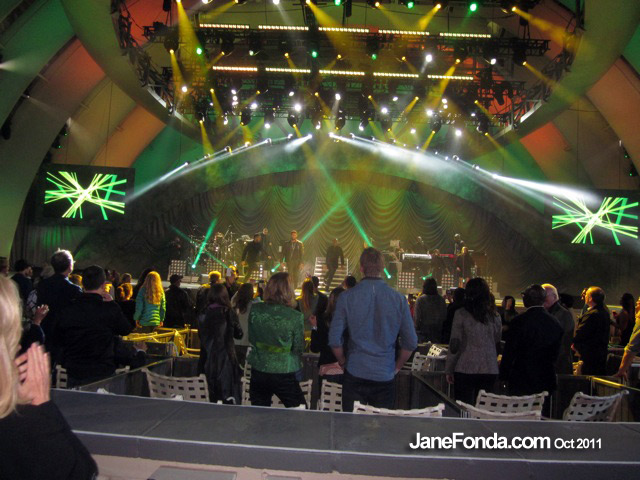 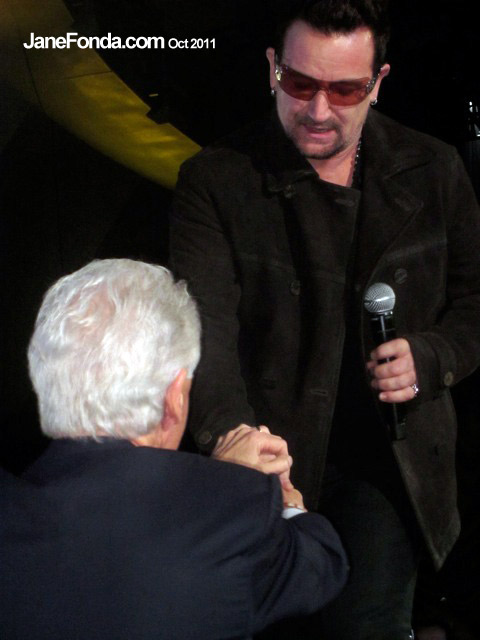 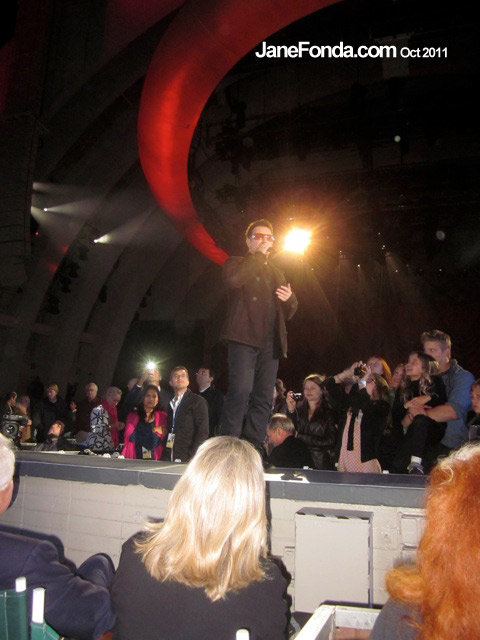 The big surprise of the evening was the rock and roll band from Columbia and their lead singer/guitarist, Juanes. President Clinton told us he is the best known and loved rock ‘n roller in South America and he was fantastic and unusual. We’re going to get all his albums.

Many stars including Ellen Degeneres, Jason Segel, Maria Bello, Ashton Kutcher and others introduced the musicians.

When the show was over, President Clinton said, “I am the only former President to have a 65th birthday attended by both Lady Gaga and the Secretary of State!”

Richard said, as we were leaving that it was probably the best live concert he’s ever been too…and he’s been to many! 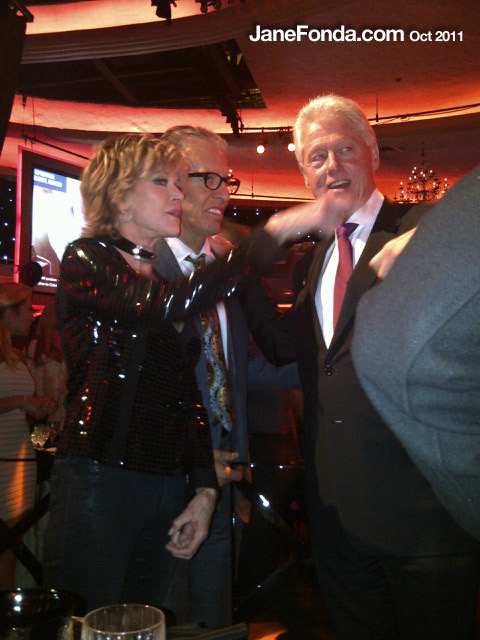 With Richard Perry and President Clinton