Oprah called me out of the blue. I was sitting at my desk, working on my new book, the phone rang, “hello Jane?” in a somewhat husky, soft voice, “yes?”–I had no idea who it was. “It’s Oprah.” OMG! My heart started pounding. I may have told her that, I can’t remember cause I kind of blanked out for a moment. She told me she’d just seen the Master Class I did for OWN and that it made her cry and she told me how much she loved what I said and how important it was and that her new mantra was “I want to be whole, not perfect.” Tears of happiness ran down my cheeks. I mean—OPRAH CALLED ME TO TELL ME THIS! Maybe she calls everyone, I don’t know, I don’t care. This one’s for me! Whew! I think when we said goodbye I called her Honey and said I loved her. 🙂 I’ll let you know when it will air. I forgot to ask, if you can believe that!

Let’s see, what else? 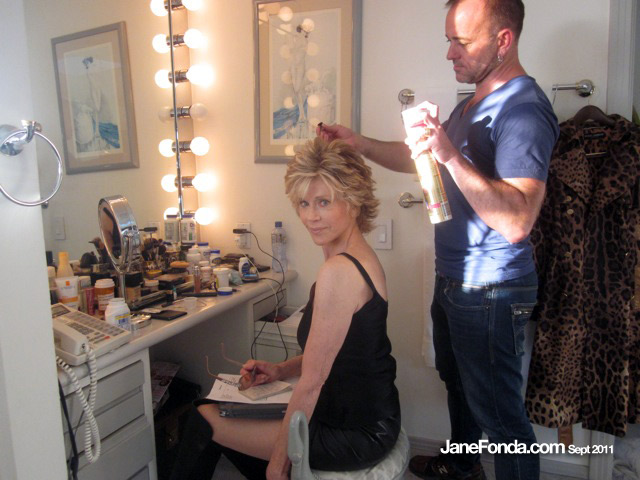 My wonderful Matthew came to the house to “do me up” before I went to a party at the home of Laurie David to hear Van Jones speak about his rising new (and very broad) movement, “Rebuild the Dream.” Very interesting, hopeful and exciting. Check it out on rebuildthedream.com. I got a twang of sadness because this is the home where Laurie and her then husband, Larry, first introduced me to my Golden Retriever, Roxy. 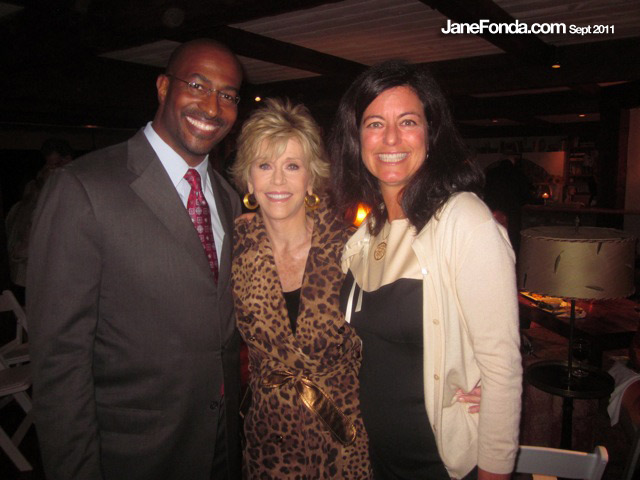 With Van Jones and Laurie David

I finished most of my book for girls ages 12-17 about sexuality, relationships and gender. I am loving writing this book. Next one will be for boys (which I also love to write about).

My son, Troy Garity, (@troygarity) learned that his TV series, “Boss,” with Kelsey Grammer, is being renewed for a second season. Clearly Lionsgate et al feel they have a hit on their hands cause the first season hasn’t even aired yet…but will soon. Troy adored the entire experience, says that Kelsey is fantastic and so is supervising director Gus Van Sant (Gus’s first time doing TV!). Chicago really loves Troy, two Barbershop movies and now two TV shows!

Next week my latest film “Peace, Love and Misunderstanding” is having its premiere in Atlanta to benefit GCAPP. Besides being able to see the film for the first time with an audience, I’ll get some much needed (but not enough) time with the Grandkids and some of my dearest friends in Atlanta who I haven’t seen in far too long.

FROM MY SOCIAL MEDIA MAILBAG…..

Its been funny asking people to “Like” me on Facebook. Sorry to say it over and over, but I want as many people as possible to have the opportunity to participate in the fun PRIME TIME contest opportunities that I will be having there soon. http://www.facebook.com/JaneFonda

Today on twitter I saw that Lady Gaga has close to 14 million followers. As most of you know she calls them her “Little Monsters”. I said “wow!” and the very clever @louisvirtel wrote: Jane, your fans are just as fierce. We’re your Monsters-in-Law. Thanks Louis!

I found out quite a bit about online book clubs, and found that the YummyMummyClub has a book club of thousands, and KCRW has the Bookworm club!

I learned from you all that Tweeople and Tweeps is the most popular term to describe twitter users.

I shared my lunch in bed with Keener photos and it seems you all love her as much as I do.

Melissa Walker wrote on Facebook that she has lost 20lbs in 6 months doing my fitness DVD way to go !

Nancy who makes airplanes, or @mia1955, has purchased autographed copies of PRIME TIME as Christmas gifts! I guess like me she does her shopping early!

Shay Stegmaier from Wichita wrote on twitter that she had a “9 to 5 copier moment!” HAHA!

Bill Starkey wrote on my website that he tried and successfully made my Chicken Curry Stew recipe.

And tons of you are still watching Monster in Law! I love that people tweet when they are watching it. I really wish we had made a sequel!

Here are a few photos of Tulea from this week while we’re at it:

Tulea with the wind in her face

Don’t you who have dogs love it when they stick their heads out the window and all the hair blows back on them? 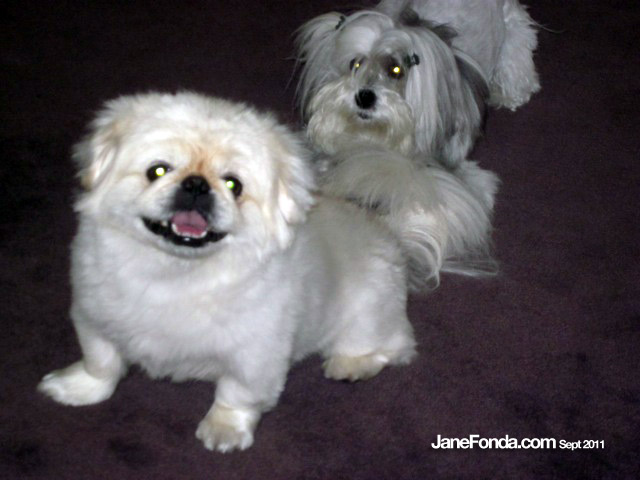 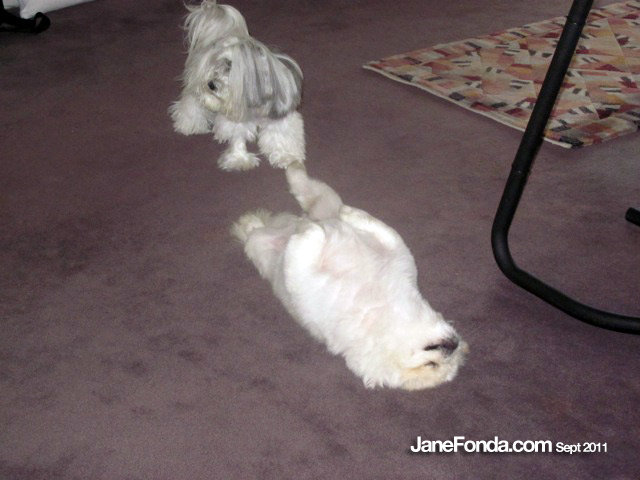 There's Vinny, wanting to scratch her back, totally ignoring Tulea.