Flew to L.A. From D.C. Where I did The Diane Rehm Show and started the next day with a line up of phone interviews. Then Valerie Bertinelli came over and interviewed me for the AARP TV show called, My Generation, which airs on PBS. That was fun. We hadn’t seen each other in ages and it was like having a catch up conversation with an old friend. She filmed me making a smoothie for her…like what I often have for breakfast…apple juice, whole banana, blueberries, strawberries, soy protein power, Blue Agave sweetener and ice. Yum. 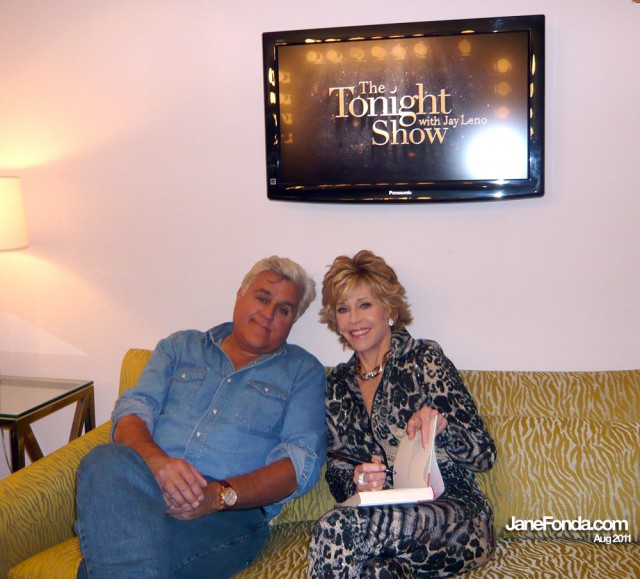 I did the final Jay Leno Show before their summer break.  Jay’s show is always fun. Before going on I surprised Jamie Foxx as he came off stage after singing. I am a total J Foxx fan!!! 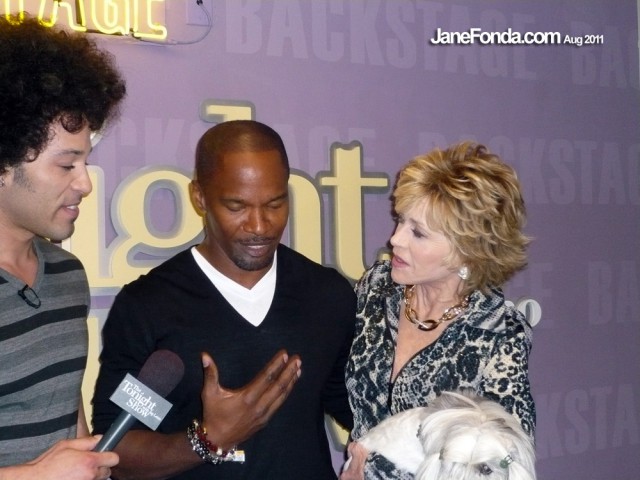 Elizabeth Banks joined me for the second segment on Leno and I was happy to have had the chance to meet her. She is really nice, a talented actress and when I have some down time I look forward to seeing her new film. 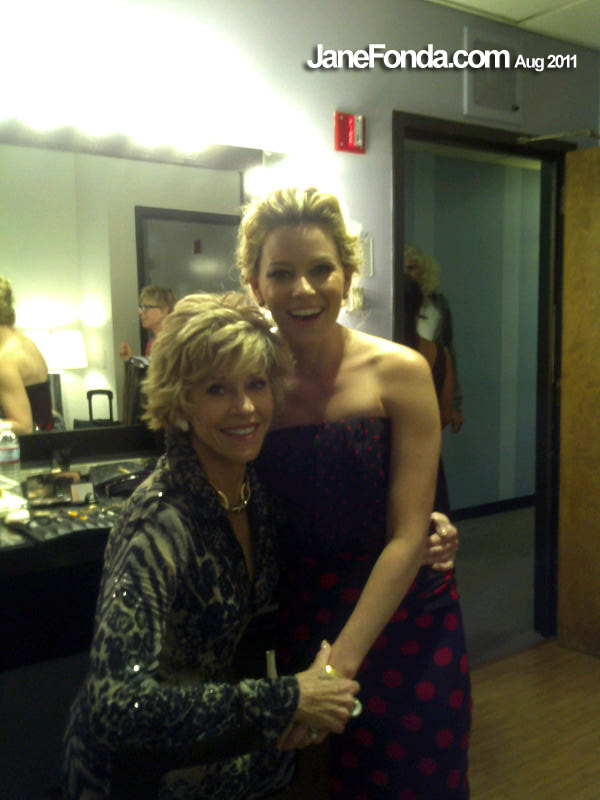 The next day I started a series of phone interviews from the UK at 6a.m. Calif time, then a few more interviews, then went to the big Barnes and Noble bookstore at the Grove where I gave a talk (about my book) and signed people’s copies. Then Richard took me to a wonderful dinner a deux at Cecconi’s. 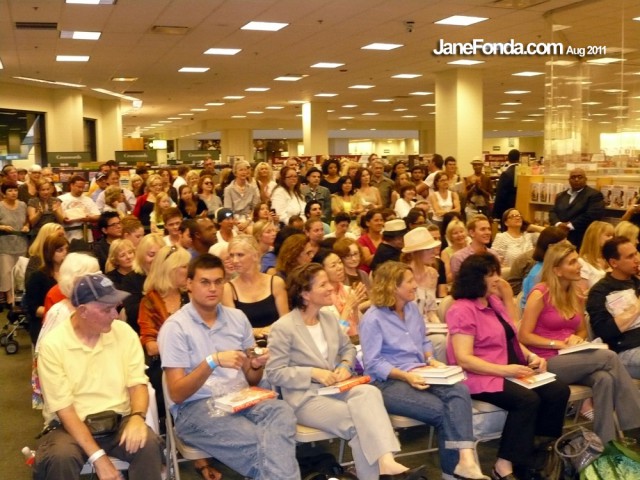 I can’t remember what I  did the next morning but by the afternoon I was in Pasadena doing a talk and book signing at Vroman’s. I remembered that last time I was there, 6 years ago when I did an event for my memoir, my friend, John Phillip Law who played Pygar, the blind angel in Barbarella, came to see me with his daughter. He’s gone now. Died of cancer two years or so ago. I sent up a prayer for him before I went in.

From Pasadena I flew to San Francisco where, the next day I began a really hectic 2-day schedule of radio and TV interviews, bookstore appearances and signings. One night we had 800 people in the First Congregational Church of Berkeley. The most wonderful crowd! The next day there were about 150 people at Book Passage for breakfast and  200 or more at lunch at the Left Bank and 400 that night at Kepler’s in Corte Madera. Ran into many old friends and was cheered by the sight of  my cousins, Alex and Cameron Fonda Dabney. 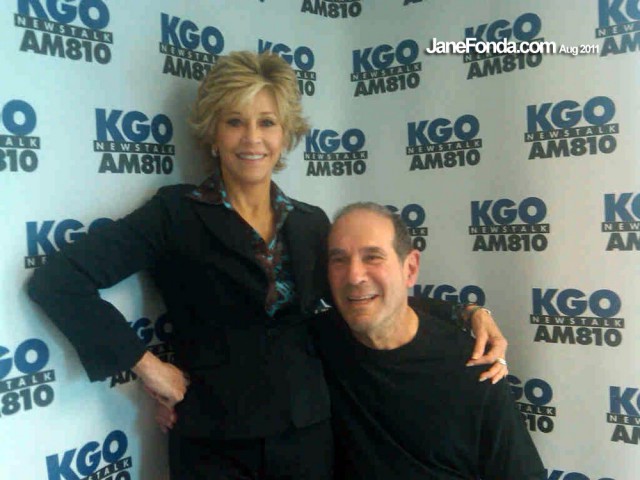 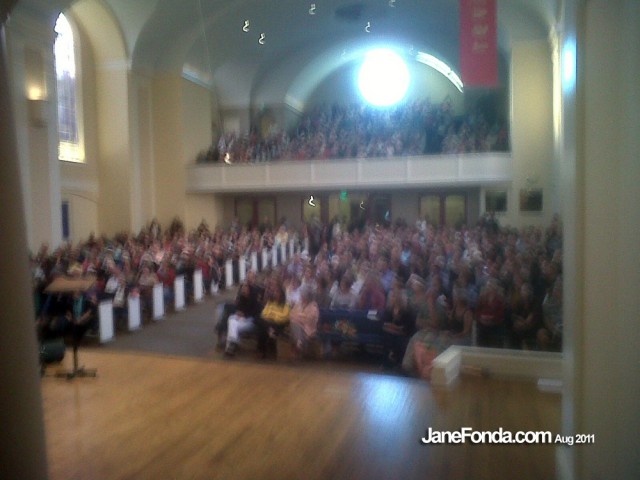 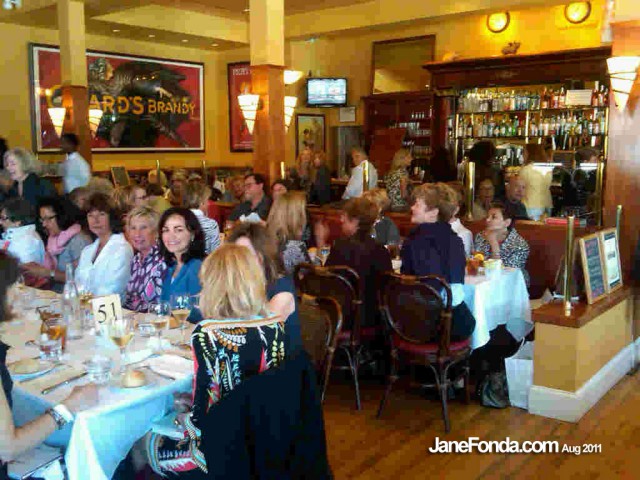 Lunch at the Left Bank 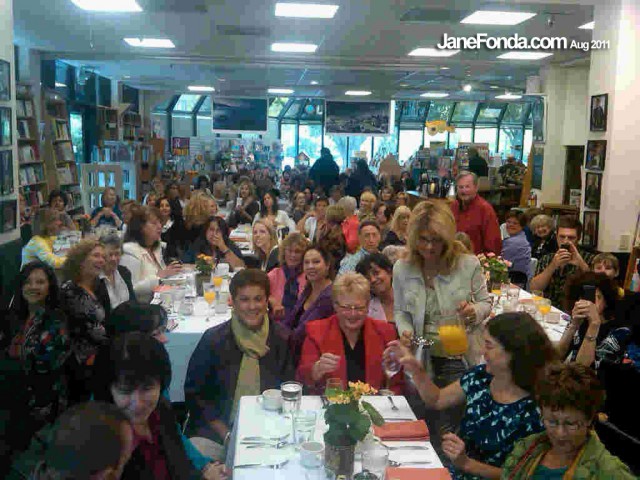 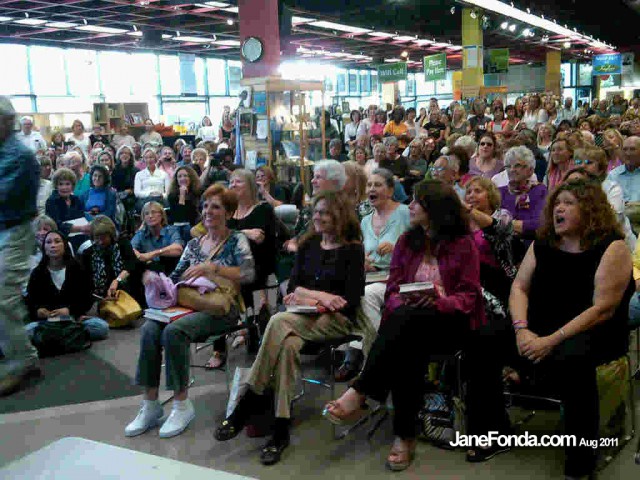 The final night in San Francisco, I went to a Chinese restaurant for dinner with dear friends Vivian Schneider and her partner Ruth. Did we laugh!!!!!!!! Viv is Lily Tomlin’s lawyer and every bit as funny as Lil. I still haven’t quite recovered, truth be known, but now I’m en route to Toronto, one of my favorite cities. I spent a lot of time there making movies and, back in the day, I was a major cyclist…when I wasn’t filming I’d go 50-100 miles at a time. Toronto and it’s environs has the best, most beautiful bike paths…through parks, past rivers and waterfalls. Broke my nose coming around a corner too fast  in the rain and collided with another cyclist but it was near the end of the filming and they made it work though I lost a few close ups as a result. (That was ” Stanley and Iris,” i am referring to).

Toronto is my last book tour stop for awhile. I will do more later in the fall. When I go home on Tuesday, I won’t have to leave again till Sept 13th when my last film, “Peace, Love and Misunderstanding” premieres at the Toronto Film Festival.

I am looking forward to resting, starting tap dancing lessons, continuing tennis lessons and working on my next book(s) about adolescence and sexuality.