On the 16th, I went with Carrie Fisher and Richard to see a preview of “Baby, It’s You,” the Broadway musical that Richard was working on when he and I first started dating and it was playing in a tiny theatre in Los Angeles. Now it is about to open on Broadway (April 27th). It has become a new animal—a fun, rousing, musical that audiences seem to be eating up. The music is infectious and makes everyone want to sing along. I think it will be a big hit. 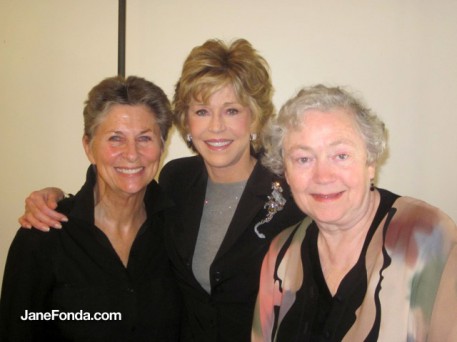 The next morning I was on a panel with Roshi Joan Halifax and Mary Catherine Bateson at the Legacy of Wisdom Project. The mission of the project is “making wisdom the central operating principle of aging.” Other participants included Ram Dass, Harry Moody, Rabbi Zalman Schachter Shalomi. I was worried because 1) I was tired and 2) I’m not especially wise. But, as is always the case when I am in the company of the truly wise Joan and Mary Catherine, interesting things come to the fore.

Following that, I rushed to hop a Delta flight to Atlanta with Gabby Sidibe. While I had met her at the screening of “Precious” that opened the New York film Festival and crossed paths at some gala functions, I had not really had a chance to talk with her. One of the things I wanted to ask her was if she gets recognized often. I didn’t need to. People definitely recognize her. They spoke to her, passed notes to her. Clearly she has had an impact, especially on young women. I discovered in her, a 27 year old woman who, at age 22, knew she had to make a decision to either accept who she was and be strong or die. She chose strong and rarely have I met someone her age who is, as the French say, so ‘bien dans sa peau…Well in her skin. She exudes a wisdom and confidence. She laughed and told me that people often say to her, “How wonderful that you have followed your dream!” “But my dream was never to be an actor. I just went on the audition [for Precious] cause a friend said I should. My dream has been to be a psychologist.” When asked about fame and how that has affected her, she got big laughs when she replied, “You have no idea how hard it is to buy tampons when you’re famous!” In other words, it bugs her and it’s not why she is doing her acting—for now. 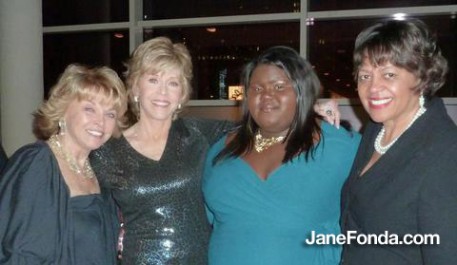 She was coming with me to Atlanta to participate in a dialogue with me and 2 other young actors with the Alliance Theatre that followed a screening of the documentary “Jane”, made in 1962 by D.A. Pennybaker. It has been a painful thing for me to watch because I was so voiceless and disembodied as I went through rehearsals and out-of-town tryouts of a play that lasted 2 nights on Broadway. I decided to show it as a fundraiser for my non-profit G-CAPP because part of what we do is try to help girls keep their voices at adolescence, when many, if not most, lose theirs…well, not lose…their voices go underground so they will fit in, be ‘popular’, acceptable, ‘good girls.’ This is more common with middle class white girls than with african-american girls who ,from early on and often from their mothers, learn that, to survive, they need to maintain strong voices.

It was a successful evening, that included a meaningful conversation with the audience, moderated by Susan Booth, artistic director of the Alliance Theatre. At the party afterwards, people said how moving they found it and how much they had learned. They especially commented on how amazing Gabby is…”what wisdom!,” exclaimed one man.

Gabby spent the night with me in my loft (strange to be back as all my personal things have moved out) and I spent the day in my office looking for photo and film archival stuff for the enhanced eBooks of both my memoirs and my new book, “Prime Time”, which comes out Sept 20th. I’m excited. I was interviewed two days ago by the first person outside of Random House (i.e. no dog in the race and, hence, not obliged to make any comments) who said she “devoured” my book and thinks it has everything “from A to Z” that anyone would want to know about approaching and living into the aging process. Actually, I think so too, but then I’m prejudiced!

Tonight we had a farewell party for Michele Ozumba who has been CEO/President of GCAPP for many years, the Policy Director and a board member before that. I’ve known and worked with Michele since 1995 when she was head of Maternal and Child Health for the state. It was a moving ceremony at the home of Drs Robert and Cheryl Franklin. He is President of Morehouse College and Cheryl is an OBGYN and Board chair of GCAPP since I’ve moved to L.A. On Friday I come back to Atlanta to join other members of the selection committee to interview candidates for our CEO position and then Easter with my Grandkids at Ted’s farm outside Atlanta.

Tomorrow we have a board meeting and then I fly to Tallahassee for a fundraising event to support the Thomasville Community Resource Center which I helped build in the 90s. It will be a wonderful experience, I know. It’s been quite awhile since I’ve been down there and I will get to visit the TCRC Center, witness all they are doing for the children in that community and see old friends. I will read from my memoirs, about the making of “On Golden Pond,” and then dialogue with the audience.

I leave early Wednesday morning to go back to New York to, again, dialogue with Gabby after a screening of “Jane,” this time to benefit the Women’s Media Center and this time, moderated by Co-founder Gloria Steinem.

In others words, this is my fundraising week. It will all continue to be exhilarating and a learning experience.