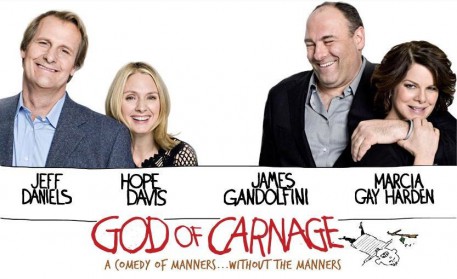 Richard and I took friends to see God of Carnage at the Ahmanson last night. I had seen it in New York. The play, starring Jeff Daniels, James Gandolfini, Marcia Gay Harden and Hope Davis, was playing when I was there with my play and I loved it so much that I wanted Richard to see it too. Two years ago, the play won the Tony ( beating my “33 Variations”) and Marcia Gay beat me for the Tony for Best Actress.

This same cast was at the Ahmanson last night and just as good. It felt funny, bittersweet, to be coming back to that theatre, this time in the audience, not on the stage. I realized I miss that experience.

We all went to dinner afterward ( except James) and had a fun time talking about L.A. Audiences (generous, grateful) doing a play the second time (like me, they feel they are still growing in their roles and life in the 2-year interim has taught them things that have deepened their understanding of their roles.

Richard went to U of Michigan and, as you may know, Jeff lives near Detroit and is deeply committed to helping that challenged city and state. So he and Richard had a Lot to talk about. We made plans to get together to see his theatre when we go there next October for a UofM home football game.

Right now I am in the airport waiting for my plane to Seattle to be repaired so I can get to the Seattle hotel in time to get some sleep before my appearance tomorrow, a speech, on behalf of the YMCA. I have not made a public speech in a long time. I enjoy doing it when it’s for a good cause and about something I know about. This YMCA has programs for teens and I can give many speeches about teens. In fact, my next books are about teens (and parents of teens). Then I will hook up with Richard in NY for a few days.

Sunday I am part of a conference called “Legacy of Wisdom” in which I participate with truly wise people such as Roshi (Zen priest) Joan Halifax and Mary Catherine Bateson (author, social anthropologist, daughter of Margaret Mead).

Then I go to Atlanta with Gabby Sidibe (star of “Precious”) for an unusual fundraiser to benefit the non-profit I founded 16 years ago, the Georgia Campaign for Adolescent Pregnancy Prevention. We will show a documentary made In 1962 by acclaimed filmmaker D.A. Pennybaker called “Jane”. It shows me rehearsing a new play for Broadway, taking in to various cities in out-of-town tryouts and then opening on Broadway to terrible reviews and closing 2 nights later. It is very painful for me to watch how disempowered and disembodied I was. As I said to someone awhile back, “I feel lucky to have concrete proof of how far I’ve come. Not everyone has that.” it is hard to believe, watching the documentary, that the sad, anxious young woman in the doc became me. After the screening, Gabby and I will dialogue about how the arts can empower and how young people can claim their voices. Some young actors from Atlanta’s Alliance Theatre will also participate.

I will have a screening of the same documentary with Gabby in New York next Wednesday to benefit the Women’s Media Center. That night at the Paley Center, Gloria Steinem will be the moderator.

I’ll come back to Atlanta after that through Easter. It will be wonderful to see my grandkids again and I am bringing my bunny suit…a full suit. I paint my face clown white and glue broom straws on my checks as whiskers. That I will take pictures of for sure!! We’ll have an awesome Easter Egg hunt at one of Ted’s properties outside of Atlanta which he has graciously let us use.