One day, I was walking down one of the narrow country roads in Greenwich, Connecticut that have no sidewalks. I was 10 years old. It was 1947 I think. I felt very lost and alone because a week earlier we had left California and I had had to say goodbye to my beloved best friend, Sue Sally Jones.

As I was walking along, I encountered a tall, skinny, freckled-faced girl with short dark hair. Diana Dunn. It didn’t take long to discover that we shared a passion for horses and would both be in the same class that fall at the all-girls Greenwich Academy. Diana introduced me to the Round Hill Stables and Riding Club. I learned to take a horse over a jump there, and it was there that Teddy, the stable boy, broke my arm in a wrestling match. Another boy would find his way over to our house to play with me that summer. I don’t remember his name but he was the son of the gardener on a nearby estate. He, Teddy, Diana and I would roam for miles like a pack of wild dogs, noses to the ground, sniffing, snooping, rolling about, wrestling. They knew I was a girl because my name was Jane, but aside from that, it was hard to tell me from the boys. I don’t think that Mother was terribly pleased that my friends were the sons of gardeners and stable hands, but she was slowly sinking into a state of painful desperation and I was left to choose the company I kept.

Diana had her own horse, a black and white paint named Pie. Her mother, a tall, slim woman, very much a part of the ‘horsey’ set, was kind to me during the almost four years we lived in Greenwich. When things were going really badly in my house I would be sent to stay with the Dunn’s. I was there for 5 days after my mother’s suicide and I was there when my grandmother called the Dunn’s to inform them that my brother had accidentally shot himself through the stomach and had been pronounced dead. (obviously and miraculously he survived).

Diana filled the void that had opened when we left Sue Sally Jones and her mother behind in California. While Sue Sally had represented cowboys, Indians, and buckskin, Diana was about fox hunting, canary-yellow jodhpurs, patent-leather-topped boots, and hard, velvet caps.

We grew up, went separate ways, married and I figured I would never see Diana again…or Sue Sally, either. Then, quite by chance, 4 days after 9/11, I met a woman who told me she’d had lunch with someone who said that her sister, Diana Dunn had been my friend. I was in the midst of writing my memoirs and so wanted to find Diana and talk to her about the ‘old days.’ I ended up visiting her at her ranch in Colorado. Turned out she still was a horse person, raising, breaking, showing, selling hunter-jumpers. On the way from the airport, she told me that during dinner, she was going to make a phone call and then she would ask me to take the receiver and tell the person on the other end my name. Mystery!!

When the time came, I held the phone, said my name, asked who I was talking to and the voice at the other end said, “Well, Lady Jane, this is Sue Sally.” I was so stunned I couldn’t speak, Then I screamed with joy and tears. Turned out, Sue Sally (Hale was her married name), had played competition polo for 20 years disguised as a man (breasts taped down) because women were forbidden to play. Then, in 1972 , because she was so good and because her husband and two other men went to bat for her, she was finally allowed to play in tournaments as a woman. A 1977 newspaper clipping from Chicago Tribune Magazine, shows how shocked the polo world was: “There maybe one thing worse than death out in Calif. Someone named Sue Sally Hale has been given a 1-goal rating and is playing with the men’s team out of Sleepy Hollow Polo Club in Carmel.”

Sue Sally had land in Indio, California where she kept her own horses and supported herself by boarding other people’s horses when they came there for the months-long polo games and horse shows during the winter season. Diana was one of the people who boarded with Sue Sally. That is how she knew her and when, before reuniting with her in Colorado, I sent Diana some of the early manuscript from my memoirs so she could see if I told her part of the story accurately, Diana saw the name ‘Sue Sally’ and figured there could only be one with that name.

A month later, I went to Indio and the three of us had a deep and miraculous reunion. I even got to watch Sue Sally play polo. She lived in her barn together with about a dozen opossum, a few goats that wandered in and out and many other sundry critters too numerous to mention. She could barely walk because of some severe, callous-like disease on the bottoms of her feet. I asked why she didn’t see a doctor about it an she reminded me that she was a devout Christian Science practitioner and so would never see a doctor.

Less than a year later, Sue Sally called me out of the blue(“Hey, Lady Jane, been thinking bout you. How’re doin?”). She called Diana that same night. She died of a heart attack the next day walking out of her barn. We figure she must have sensed it was coming and needed to say her goodbyes. Polo fields are now named after her.

Diana Dunn has moved to Santa Fe, New Mexico and often comes to my ranch to ride my horses. She found a photo of the two of us at about 11 years old, sitting side by side on the ground. It was her only copy. She brought it to me one day this summer when she came to lunch. I had us pose in the exact same position on my lawn because I wanted to use the two pictures– 60-years apart—in my new book. But I am unable to find the old photo. I am heart broken about this as there is no copy. But here we are now, Diana and me, backstage, taken a few days ago. Side by side. 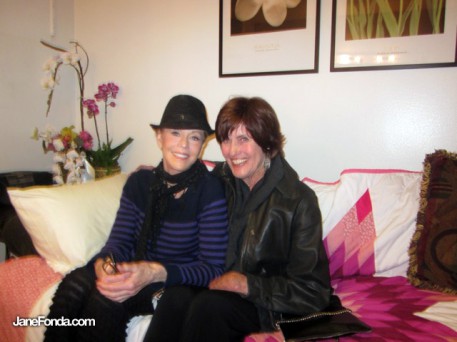 Me with Diana Dunn Coe