Last night we celebrated Guy Bedos’s birthday and Daniel Bruhl’s as well although his was earlier last week. We gathered in Guy and Jo’s apartment, a stone’s throw from were I am staying on Ile St Louis—the cast, director, producer and Guy’s family and friends.

What a fun time we had as the wine and vodka flowed!!! You’ve got to understand, 3 of our male stars—Claude, Guy and Pierre—are comedians, and not for nothing. They are seriously funny and we laughed till we cried…at least I did. How therapeutic laughter is!! Pierre told me there is a “Laughter Clinic” in Paris to help cure ill people.

It was especially nice to meet and get to know the wives of our co-stars—Jo Bedos, Ceyla Richard, and Catherine Rich.

Today, Sunday I have stayed in all day to write…actually, early this morning, I went out to walk Tulea and ran into Jo who was walking her puppy. She had on a down parka. I didn’t stay out long because I have no warm clothes. I hope this cold spell will pass before Richard gets here.

We also celebrated Daniel Bruhl's birthday with a cake

Jo Bedos, with the new puppy she gave Guy for his birthday.

Pierre and his wife, Ceyla, with the puppy.

presenting Guy with his cake

Claude being his usual dramatic self. Actually, I think he was singing a raunchy song that he sings in the movie, only not leaving out the final and most raunchy verse.

Geraldine and her husband, the Chilean cinematographer, Patricio.

Geraldine with actor Catherine Frot. Geraldine was so overcome when Frot arrived (she thinks she's one of the greatest actor's)

Pierre and Ceyla--she is Brazilian and fabulous!

Guy with his daughter, Victoria 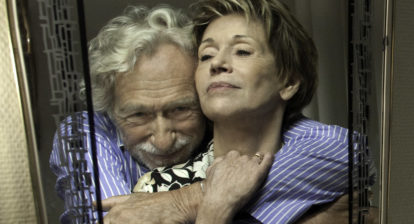