Yesterday we all were filmed in a small studio on the other side of Paris. Waaaay on the other side! It was the first time meeting Claude Rich. All the others—Geraldine Chaplin, Pierre Richard who plays my husband, Guy Bedos who plays Geraldine’s husband, and he German actor, Daniel Bruhl—met many months ago when I passed through Paris on my way from Dusseldorf and we had a wonderful dinner together with the director and producers in Mont Martres.

The director decided the dance Claude and I do will not be the Tango—too formal and “prepared”–but, instead, just a dance that is easier to improvise. I’m a little sad because I was enjoying learning the tango steps. Oh well.

I was so enthralled with meeting everyone and being in front of the camera that I forgot to take any pictures for this blog. Dang! I think, I felt and everyone said, that we all looked great together…very familiar and at ease. Dominic, the hairstylist, cut my hair a little shorter which looks good for the character. I like the way he and the makeup artist, Fabienne (I got her name wrong on my last blog), are making me look. Not glamorous but right. I decided I will not go to the rushes. I don’t want to become self-conscious with how I look. I’ve got enough to worry about with the French dialogue.

Last night a friend from Atlanta, Mark Benerofe, called and asked me to dinner. Actually, he invited me to go to the French open Tennis tournament with him but I had to decline cause we were working but I wish I could have gone. My friend, Martina Navratilova was doing the commentary and I could have seen her.

Anyway, Mark and I and his friend, Perry Cantarutti (Senior VP of my favorite airline, Delta, for Europe, the Middle East and Africa) had dinner at Café Flore on Blvd St Germain on the left bank. I hadn’t been there for such a long time. I’m going to take Richard there for lunch when he comes mid June. 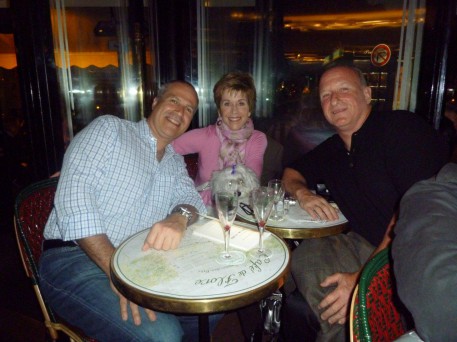 That’s Perry on the left and Mark on the right...Tulea in the middle.

I just finished rehearsing with Pierre Richard and our director, Stephane, here in my apartment and now I am going to look for a hotel near me for Troy and Simone who are coming June 8th for 3 days before we go to St Tropez for my daughter, Vanessa’s, wedding to Paul Van Winkle, whom I like a lot. I am very happy for them. The wedding will take place in the home of Catherine Schneider, whom Vadim (my first husband) married after me. She and I are good friends and I look forward to seeing Vadim’s family at the wedding—his sister, Helene, his niece and nephew and other children, including his son with Catherine, Vania Vadim. Tomorrow Catherine and I will go to Vania’s photo exhibition and have dinner after. 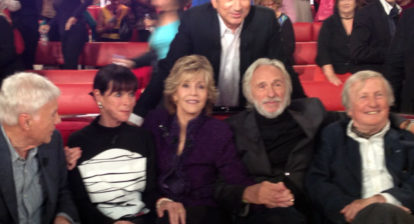