Last night we went to the last Paul McCartney concert at the Hollywood Bowl and it was everything I hoped for. I have never seen Paul perform live. His band is extraordinary. The production as well, with enormous pictures, and graphics filling the entire stage behind him and changing with each song—sometimes old footage from the Beatles’ films, sometimes still photos of them. He dedicated “Something” to George (who wrote it) and played the first part of it on a ukulele because George loved to play that instrument.  Behind him, there were wonderful pictures of George over the years. Paul also sang a song about missing John and while he sang, an enormous globe of the moon descended behind him, lit in an ethereal light. Then a globe of the earth descended. It was very moving. I wasn’t the only one to be crying. I was impressed with the quality of Paul’s voice. Richard, who knows about these things, said most singers have to lower their songs by an octave or more as they age, but not Paul!! I was also impressed by the diversity in the sold out audience…children singing every word, and oldsters doing the same. Much racial diversity as well. On one side of our seats was Samuel Jackson and Charlize Theron was on the other. When I wasn’t looking at the jumbo screens with camera close ups of the musicians, I was staring at Charlize’s stupendous profile. How gorgeous is that woman!!!!

I was also impressed with how gracious Paul was at the small after party—gracious and funny and real and kind. What a night! I feel so lucky…but forgot my camera. Can you believe that!!! 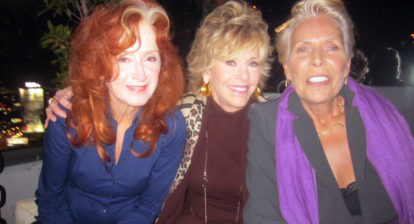