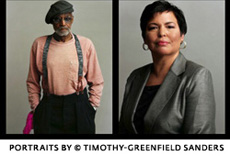 The other night at the Paley Center, my friend Pat Mitchell who is President and CEO of the Center, invited Richard and me to attend the photo exhibit and screening of “The Black List Project.” This was the third part of the series of extraordinary interviews with African Americans who have been successful, mostly in the face of great odds. HBO has shown the first two but I had not known about it.  Photographer Timothy Greenfield-Sanders did the photographing and former New York Times film critic, Elvis Mitchell, did the interviews although he is never seen or heard. May not sound very special—interviews, seen ‘em, done ‘em. But this is something quite different. Just these amazing faces, not prettied up, taking right at the camera in ways we don’t expect. Often profound, funny, surprising. What’s terrific is that although most of the subjects have had a hard go of it, overcoming huge obstacles of racism and sometimes poverty, they are not victims. They don’t see themselves as such and we don’t either.

I wish every single American school child could see these interviews. They’d learn a lot about not giving up, about going for it. Because I work with disadvantaged youth in my home state of Georgia (youth of all ethnicities, not just black) I recognized so many themes…the mother who, though poor and single, instilled in her child the importance of education and the will to succeed; the one person who makes all the difference in the child’s life…a teacher, an uncle, a neighbor. I can’t remember who of the interviewees talked about what the black community was like before integration when lawyers, teachers, janitors, doctors, construction workers all lived in the same community. How different today in south Atlanta, for instance, where middle class professionals have moved to the burbs leaving the seemingly permanent underclass with no one to show the young ones what it means to get up every day and go to work. Not that they don’t want to work. There are no jobs and few mentors to tell them what to wear and how to behave and why it’s important to be on time. The kinds of things we of the middle class learn from our parents. There’s no Uncle Joe to call to make sure they’re up and out the door. It’s as though there was a giant mirrored wall all round these run down communities and all they can see is themselves. This is why mentoring, 100 Black Men, Boys and Girls Clubs and other such organizations  are so critical. But don’t get me wrong, the Black List is a real “upper.” After the screening there was a Q & A on stage with Elvis, Timothy, Suzanne de Passe (Motown exec), Lou Gossett Jr. and Beverly Johnson, the first black super model.

Anyway, check it out if you get a chance.