Woke up with a cold. All those people coughing on the plane. Slept with the grandkids. Hope I didn’t give it to them. I was supposed to go to my stepchildren’s home for dinner tonight. By that I mean Laura Turner and Rutherford Seydel and two of their three children. I still feel we are part of the same family. Their son, whose birth I filmed, is a major hockey goalie and so went to finish high school in Toronto where hockey rules. I’m so proud of him. He is an amazing human being. 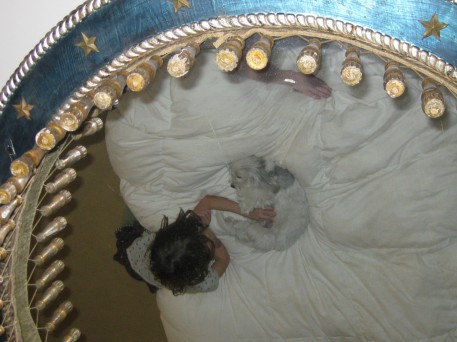 I just took this picture shooting up into the overhead mirror while lying in bed. That is my granddaughter scratching Tulea’s tummy. Sometime I’ll photograph the bed and post it. I’m a fool for unusual beds and this is definitely the most unusual, one of a kind, canopied, mirrored one I’ve ever seen. Richard hasn’t seen it either. My bed at my ranch is pretty unusual as well. (Come to think of it, I have a picture of that one and will post it now). The problem is I got them when I was solo and they’re antique so not very big. If Richard and I are still together in a year I’ve promised to get a king-sized one as he’s 6’3.” 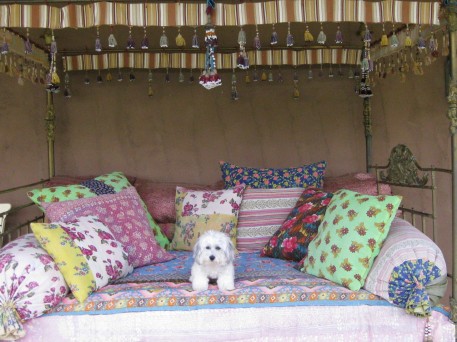 Shucks. I erased the photo of my ranch bed so I’m sending this one, a bed that is outside on the portale. My favorite napping place (and sometimes overnight place) cause I can hear the river close by and see the stars.

Join us. Ask President Obama to live up to his campaign commitment and stand with us to protect women’s health care today and every single day until reform is passed.

While there are some who are satisfied with the health care reform bill that passed in the House of Representatives late Saturday night, I am not one of them.

When it came down to it, Congress passed a bill that will undercut women’s access to comprehensive health care. Despite hundreds of thousands of voters like you and me who called on members of Congress to include women’s health care in health care reform, the bill that passed Saturday night includes a ban on private abortion coverage for millions of women and would prohibit it in the new “public option.”

At Planned Parenthood, we fought together with you until the bitter end (thank you), and once we lost the vote on women’s health, we started to do what we do best — gear up for our next fight.

Opponents of legal abortion and health care for women are emboldened by Saturday night’s vote and ready to bring their ban on abortion to the Senate floor. But now it’s our turn. And this time we are going to use our strongest weapon: the White House.

That’s why, today, we are calling on President Obama
http://www.ppaction.org/campaign/hcr09bse_afw?qp_source=hcr09bse_afhp
to ensure that lawmakers, especially those in his own party, support health care reform that protects women’s access to reproductive care as the next round of debate and voting occurs in the Senate.

Please, join us by asking our president to stand with us to protect women’s health care today and every single day until reform is passed.
http://www.ppaction.org/campaign/hcr09bse_afw?qp_source=hcr09bse_afhp

President Obama campaigned on a promise to put reproductive health care at the center of his reform plan. Supporters of women’s health voted for him and contributed to his campaign in record numbers — and now it’s time for the president to reaffirm his commitment to women’s health, and demand that Congress reject any bill that leaves women worse off under health care reform than they are today. Take a moment right now to tell President Obama that we need him to stand with us — in both his words and in his actions.
http://www.ppaction.org/campaign/hcr09bse_afw?qp_source=hcr09bse_afhp

If there’s anything we learned yesterday, it’s that women’s health is being targeted as expendable in health care reform. We also saw that anti-choice forces are working round-the-clock to roll back women’s health benefits. We will each need to take action many times over the next few weeks, and we need strong and public support from the White House to help us.

I’ve said this before, and it deserves repeating: without access to abortion care, and to comprehensive reproductive health care, there is no choice. Please, take action now http://www.ppaction.org/campaign/hcr09bse_afw?qp_source=hcr09bse_afhp
— and then spread the word on Facebook, among your friends and colleagues, via e-mail — whatever it takes.

Thank you so very much for standing with us and the women, men, and teens who rely on Planned Parenthood.