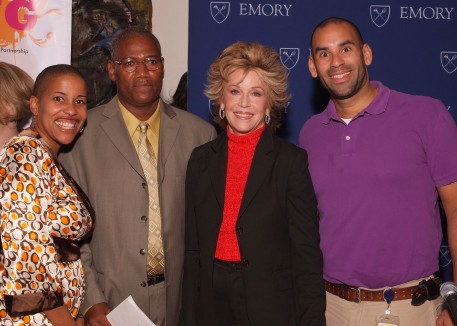 I was at The Jane Fonda Center (at the Emory Univ School of Medicine) this morning at a press conference to announce the launch of a new program to stop teen dating violence funded with a generous grant from the Robert Wood Johnson Foundation. According to the 2007 National Youth Risk Behavior Survey, during the 12 months prior to the survey, nearly one out of ten high school students nationwide had been hit, slapped, or physically hurt on purpose by their boyfriend or girlfriend. In Georgia the statistics are even higher: Approximately 1 in 6 report teen dating violence and the violence is occurring at a much younger age. A 2009 DCD study found that nearly half of 6th graders (42.1 percent) who were in a relationship also reported experiencing physical dating violence in the past 3 months. Partnering with the Atlanta Public School system, the Dept of Juvenile Justice and numerous other organizations, this multi-year effort has a 4-point strategy to stop dating violence and abuse: educating teens; engaging the parents, teachers and other adults who influencing young people; changing public policy; and implementing social marketing.

Besides doing physical harm and even causing death, Teen dating violence and abuse is associated with higher rates of drug and alcohol abuse, unplanned pregnancy, STDs, depression, and suicidal tendencies.

This is a problem that impacts more than 1 million young people each year, crossing all race and socio-economic boundaries, perpetuating an intergenerational cycle of violence and abuse.

It was a large and wonderful event with a broad showing of support from elected officials, professors at Emory School of Medicine, Grady Teen Clinic, Atlanta Public School officials and the Georgia Campaign for Adolescent Pregnancy Prevention. About 15 high School Students performed a song they have created about the new program to the tune of Michael Jackson’s “Beat It.” I saw many old friends whom I haven’t seen in over a year– Dr Sarah Berga, Chair of the Department of Obstetrics and Gynecology which houses the JF Center, Dr Ralph DeClementii, professor and researcher in the filed of adolescent reproductive health, the nationally respected Dr Marion Howard in whose name I endowed a chair at Emory School of Medicine, Marie Mitchell who used to run the Grady Teen Clinic and who is now at the JF Center and the JF Center director, Missy Kottke. I’m so proud of the work they are doing. If you want to know more, check out the Jane Fonda Center Website that’s shown on the right column at the front page of my blog. 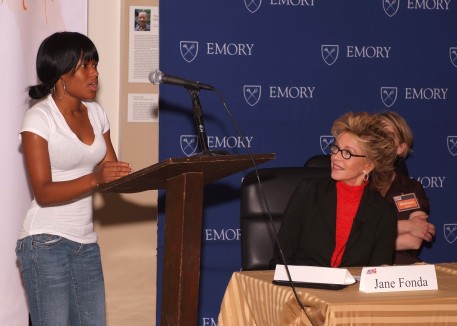 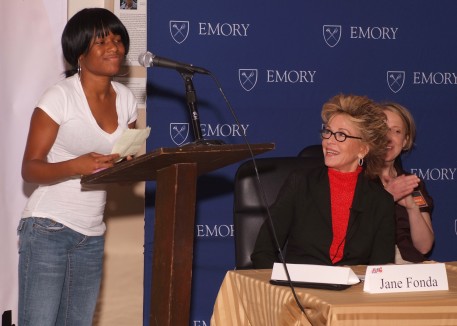 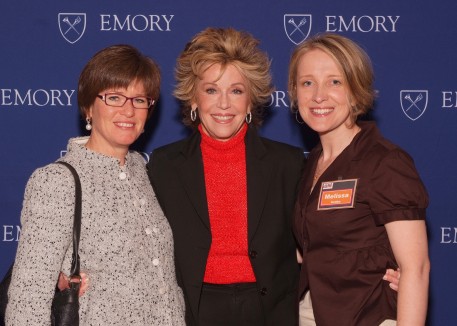 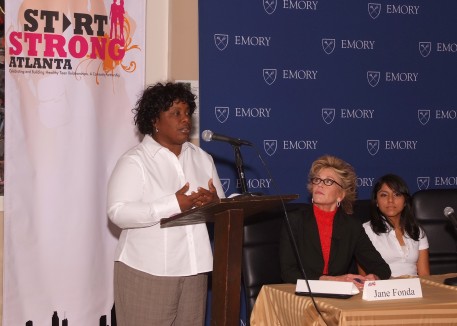 Now I am about to board a flight to New York to celebrate the 25th Anniversay of the Children’s Aid Society’s Adolecsent Pregnacy Prevention program started and still run by my mentor in the field, Dr Michael Carrera. I will be honored to talk about him tonight.

After that my friend, the brilliant and funny Hilton Als, who is writing a profile on me for the New Yorker, will take me to dinner at Orso’s where we frst me during my run in ” 33 Variations.”