Oh me, oh my. I just realized there are only 2 weeks left in the play. I have this strong feeling though that we will do it again somewhere.

This morning I taped something to congratulate Michael Douglas for his upcoming American Film Institute Life Achievement Award. We made “The China Syndrome” together.

Then I taped something for G-CAPP’s web site about how Teen pregnancy rates went down dramtically from about 1995 till 2006 and they have begun going up again which poses real problems on many levels and affects all of us whether we know it or not. Finally I taped a “Happy 85th Anniversary” message for the Omaha Community Playhouse where my father began his career. At age 18, I played the ingenue there in “The Country Girl” with dad and Dorothy McGuire, who also started her career there.
(What has [email protected] to my efforts at sleeping till 11am?)

Then I joined Zach, Samantha and Colin at the Hilton Hotel for the Spring Road Conference. Many of this season’s plays did panels for the people from around the country. This is why it’s called a “road” conference–it brings people from out there, on the road–people who are involved in theatre–regional theatre and bringing Broadway plays to their cities. Many of them are also Tony voters. Part of what they try to do during their time in New York –if I understand it correctly–is see all the nominated plays, but also, hold discussions about how to improve their work, how to expand their audiences, how to manage in these tough economic times. They must have had many intense hours of discussion because the hotel corridors were covered with butcher paper tacked up and filled with color-coded thoughts, lists, and points to remember. It reminded me of our gcapp board meetings. 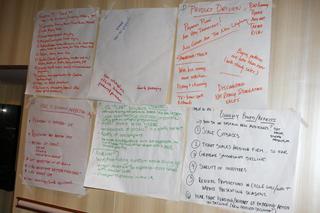 I think our panel discussion went well. There were about 500-600 people and they asked us how the play came about, how we prepare each night (I said I study the audience through my opera glasses before the show starts, then go out feeling I am about to take them on an important and powerful journey that I really believe in–and then I blog or twitter between scenes (like right now, I am writing between scenes). I was impressed with the diversity of the group both in gender, age and, to a lesser extent, race. We were asked why we had decided to do the play and after I answered, to my surprise, an african american woman in the front row said she knows the woman in Phoenix who first told me she had seen the play in La Jolla and how powerful she had found it. This was a turning point in my decision to do the play…that and meeting Moises. The four of us got to talk about how stage acting is different from screen or TV acting. It ended after 30 minutes with so much still to say.

I went right to the theatre and slept in the dressing room for 3 hours with Tulea.

It was a good show tonight. I found 3 new moments–small things that probably the audience wouldn’t even notice (except Troy, Moises and Scott Peacock who will see it this Sat for the 6th time). One is the attitude I have when I utter my last line in the first act (simultaneously with beethoven)–defiant rather than desperate. Another is that I take a brief moment to react to the archivist (“Gertie”) when she first shares her feelings about the musical sketches with me and then feels embarrased that she has exposed her feelings.

Enough. It is now midnight, I am home and need to try and sleep. I was hoping my photographer friend, Bruce, who was at the conference and told me he’d send photos, would get them to me before this is posted but they will have to be added tomorrow. 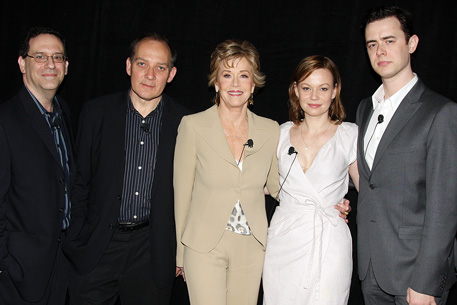 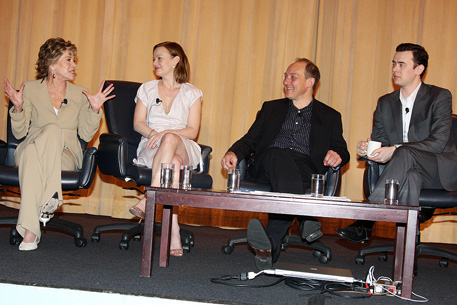 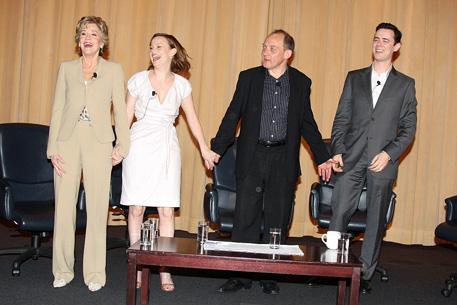 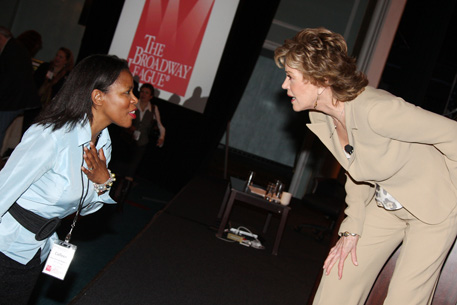 Colleen Jennings Roggensack the Exec Director of Arizona State University who also is Assistant VP of Cultural Affairs. Colleen knew the woman in Phoenix who persuaded me to do the play. (Photo: Bruce Glikas) 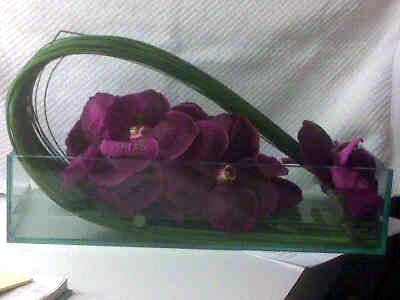