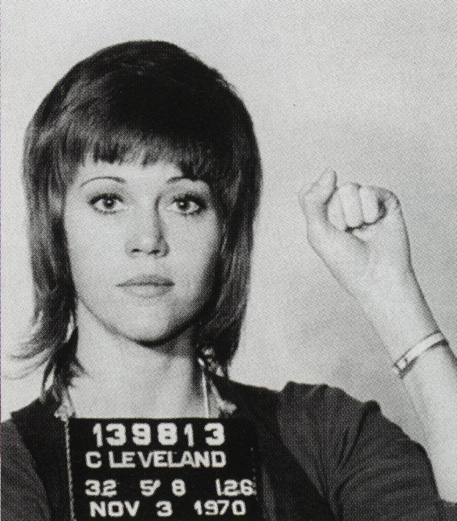 I have gotten a lot of questions about my mug shot–what’s the story behind it? Is it a real mug shot? So here’s an abbreviated answer:

Late in 1970, I was starting a nationwide speaking tour about the Vietnam War and, in particular, about the Winter Soldier Investigation (WSI) that some of us were organizing together with Vietnam Veterans Against the War. WSI was to take place in Detroit in early 1971, an American version of the Bertrand Russell Tribunal aiming to prove what soldiers and many of us in the anti-war movement already knew: The My Lai massacre, while greater in numbers of people killed at one time, was not an isolated incident, but a not-uncommon occurrence that was part and parcel of the U.S.’s war strategy.

My job was to raise money (all my speaking fees from the tour went to fund WSI) and recruit GIs who had seen or committed atrocities in Vietnam. You may wonder why someone who had committed an atrocity would want to testify. I am no psychologist but I met quite a number of soldiers who needed to heal from the psychic wounds of war by speaking out about it. About 150 such military personnel from every branch of service–Army, Navy, Marines, Special Forces–came to testify.

On the tour, I would describe what was intended with WSI and at the end of my speech I would ask veterans who wanted to be put in touch with the vets in Detroit to meet with me or with the vet who sometimes traveled with me. The comedian, Dick Gregory, also traveled with me some of the time.

My first speech was given at a college in Canada and when I re-entered the US at the Cleveland airport all my luggage was seized and gone through. They discovered a large bag containing little plastic envelopes marked (in red nail polish) ‘B’, ‘L’, ‘D’–signifying breakfast, lunch and dinner- that contained the vitamins I took with each meal. They confiscated that as well as my address book (which was photocopied) and arrested me for drug smuggling. I told them what they were but they said they were getting orders from the White House–that would be the Nixon White House. I think they hoped this “scandal” would cause the college speeches to be canceled and ruin my respectability. I was handcuffed and put in the Cleveland Jail, which is when the mug shot was taken. (I had just finished filming “Klute” so, yes, it was the Klute haircut).

Headlines across the country had the story of me being jailed on suspicion of drug smuggling. I was released on bond and months later, after every pill had been tested in a lab (with taxpayers money!) The charges were dismissed and there were a few paragraphs hidden in the back of papers that they were vitamins, not drugs.

The irony was that as a result of all the bruhaha over this, the college audiences for my speeches were never less than 2000 and sometimes as large as 10,000. Read my memoir “My Life So Far” if you want to know more.