I was nominated for a Drama Desk Award and lost last night to Janet McTeer for her powerful performance in “Mary Stuart.” So how does it feel to lose? Not great but not horrible, either, especially if it’s not the first time. Angela Lansbury, who won for Best Featured Actress, said when she accepted her award that she knows it isn’t easy being the one who “didn’t get up.” “I know because there have been many times when I wasn’t the one who got up. But you will get up one day.” It was very nice.

I’ve gotten up many times and stayed down many times and, you recover from both (winning requires attaining humility, losing requires attaining perspective…maybe winning does too). I enjoyed running into friends like Jonathan Lithgow and Liza Minnelli. I made a film with Angela Lansbury eons ago. Peter Finch was in it as well. It was so bad, I’m not even sure it was ever released. (So you see, we all win some and lose some). Stephanie Block is playing Judy Bernly in “9 to 5: The Musical.” That was the role I played in the film –that I produced. 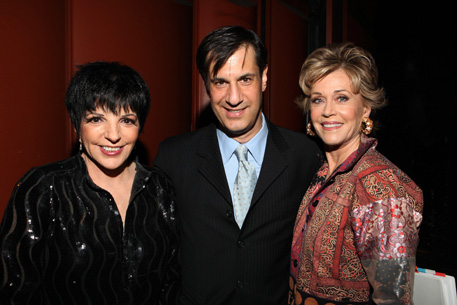 Harvey Fierstein hosted the award show and I found out that he collects folk art. I collect vernacular art of the south (some might say they are the same) and financed two volumes of a coffee table book of these artist’s work.  Several years ago Oprah gave the books out to her audience as among her favorite things that year. Anyway, I told Harvey I wanted to send them to him and he wrote down his address and, not having a pocket, I folded the paper up and stuck it into my bra right before I went on stage to present the nominated Best Featured actors and actresses. In his introduction of me, Harvey had made a funny joke about him doing my exercise videos for years and so when I was on stage and the music for “9 to 5” was playing I joked around and did a quick Jane Fonda Workout arm exercise (that I had done in our Broadway Cares skit) and Harvey’s note fell down my pants leg…something that would never happen to Dolly Parton! Oh well.

Although today is Monday, normally our day off, we are doing a special show tonight. It will be fun because a lot of actors who haven’t seen it yet will get to come and I’m told it’s really fun to perform for other actors. I’ll tell you tomorrow who came back stage. For now, it’s pack up time.