This blog will have to be in 3 separate parts because today is totally schizophrenic. We’ll start with the morning and Planned Parenthood. (And don’t forget–THIS IS MY DAY OFF) 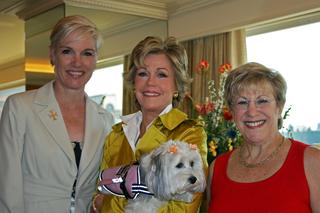 Cecile Richards on my left, the host, Marsha Laufer on my right

So– it’s a Planned Parenthood Fundraiser in a gorgeous apartment in the Trump Tower. Nice coincidence that on the front page of the New York Times today is an article about the shortage of primary care doctors which is posing a challenge to Obama’s Health Care reform proposals. You may not know it but Planned Parenthood is the primary health care provider for approximately 3 Million women in the United States every year and one in four women have used PP at least once in their lives. Obviously, PP’s services are needed now more than ever–which is why PP’s president, Cecile Richard, was among those present at the White House meeting on health care reform last month. At the event, I spoke for 5 minutes before running to the Easter Bonnet skit rehearsal. I had to explain why I was in full drag–madeup like an old tart (the Minskoff theatre is huge — it’s where “Lion King” is playing –and the lights very bright so makeup must be exaggerated).. As usual Tulea, with her pink bows, stole the show. Since a big piece of PP’s work focuses on adolescents, I talked about how teens require a different clinical approach than adults–they need more time to talk to the clinician and learn to develop trust so they can relax and are able to ask sensitive questions can’t always begin with pelvic exam, especially if there is a chance the girl has been molested. Time–it takes more time and sensitivity and staff has to be specially trained to not judge, etc. This is what Planned Parenthood does so well. I also spoke about how the prevalence of teenage parenthood is especially high among poor youth who see little future for themselves, a future that might motivate them to postpone pregnancy. Children from poor families are often parents too soon as were their parents, and this leads to a generational transfer of poverty so that prevention is also a strategy for reducing poverty. I wanted to emphasize this so that these potental funders would understand the necessity of getting funds into the pockets of poverty, especially rural poverty, where there are few if any clinics yet need is highest.

Today is a dress rehearsal for the Broadway Cares Easter Bonnet show, a chance for all the casts who are doing skits to do it once on stage, with lights and costumes and an audience. Even though the Minskoff is huge, there are not enough seats for everyone who wants to see this big Broadway Cares finale so they allow people to watch the rehearsal. I have gotten a chance to sit in the audience and watch a lot of the skits which are terrific-some elaborate dance numbers. The show opens with a great number and then Liza Minnelli comes on and sings New York, New York.

Michael Rudd works for the Production company but after work he stays with Tulea during the play, walks her and makes sure she doesn’t wander out on stage–again. He is also the one who oftens takes the photos backstage that go onto my blog. He is playing my assistant in the skit and I treat him like dirt. He is so adorable–he went and got his hair cut and got new white jeans for the skit and is really into it. Tulea adores him too. Here’s a photo of the two of them. Cute, huh? 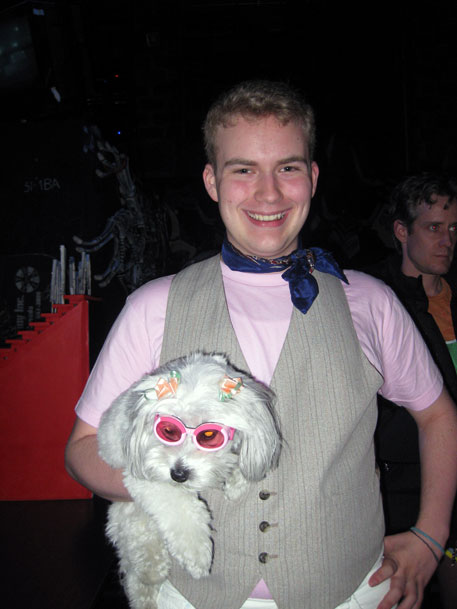 I have been assigned to share a dressingroom with Susan Sarandon. She isn’t doing a skit but will be one of the prize presenters tomorrow (as am I).

Liza just came into my dressing room and we reminisced about the ‘old days. Her roommate was a dancer named Tanya Everett and Tanya’s brother, the actor/dancer Timmy Everett, was my boyfriend. Liza looks terrific. I didn’t have a camera with me but maybe later or tomorrow I’ll get one with her.

This is sooo much fun, hanging out backstage with cast members from “Billy Elliot,” “In the Heights,” “Little Mermaid,” “Guys and Dolls,” “West Side Story,” etc etc. All the young. Kids from the shows are fawning over Tulea–as you can imagine. I just saw Beethoven’s bonnett–OMG!! I can’t send a photo yet cause can’t give anything away but it’s awesome.

Tovah Feldshuh is here as a presenter and I had no idea what a comedian she is. She had us roaring with laughter. Can’t believe I will be seeing her very dramatic show tonight at 8pm.

We rehearsed with no audience and then they ran the whole show for an audience of about 2000 and about 6pm we went on and-what to say? I didn’t expect such a response. When I dropped the full length mink coat to reveal my Jane Fonda workout outfit, complete with the iconic leg warmers, the cheers went on so long it was hard to speak. We got so many laughs. Whether we win or not, it was well worth all the effort we put into getting the skit together.

Rushed to Joe Allen’s for a quick bite and some much needed catching up with Mary Catherine Bateson before we just made it to the Walter Kerr in time for the curtain. I had been warned that “Irena’s Vow” was moving but I wasn’t prepared and had no tissues with me. By the end, I was sobbing so audibly the kind woman next to me passed me what looked like a towel and I needed every bit of it. Tovah was completely amazing. She went from middle age to young to very old as the Polish Christian who saved the lives of a dozen Jews during the war. It is a true story that gives a wonderful new twist on the history of the Holocaust. Tovah even played a Nazi officer. It is an amazing story. Mary Catherine and I went back stage after and I still couldn’t stop crying. Tovah told Mary Catherine that her mother, Margaret Meade, spoke at her college graduation and she still remembers Meade saying that marriage should be a renewable, five year contract.

We took photos of all of us but they haven’t been sent to me yet so I’ll put them into tomorrow’s blog. Right now, I am about to collapse. I feel I’ve been “rode hard and put up wet,” as my cowboy friends used to say.