Well, today hasn’t gone at all as I expected. I thought I’d have all this time because the show wasn’t until 3pm. Ha!! Woke up at 11am so I had only 2 hours until the car would come get me–barely enough time to walk the dog, have breakfast, shower, begin the Sunday paper, and print out my bloggers’ comments which I take with me so I can read through them during my day. By that time I had to leave. Then we had our 2:10 rehearsal of Septet, the scene that ends the 1st Act when all the characters come together on the stage and speak sometimes in sequence, sometimes in tandem. It can be a surprising moment–but we have to do it just right, the right tempo, etc. So we rehearse it every day on stage before the house opens to the audience. Today, added to that rehearsal, we did a rehearsal of our Broadway Cares skit for the ushers who won’t get a chance to see it tomorrow. There was a lot of laughter. I think (hope) it will go over well. AND, I got the good news that the powers that be at Broadway Cares will make me a special DVD of what we do that I can put onto my blog. That is something to look forward to.

So then we did the show which went well even though I am bone tired. Wierd though it may seem, sometimes the show can be good even if you are tired–kinda like sex-(if I remember correctly from days gone by).

Anthropologist/author Mary Catherine Bateson, her husband Barkev and their daughter came back after the show. Their train from New Hampshire got stuck so they only saw the second part of the 2nd act. 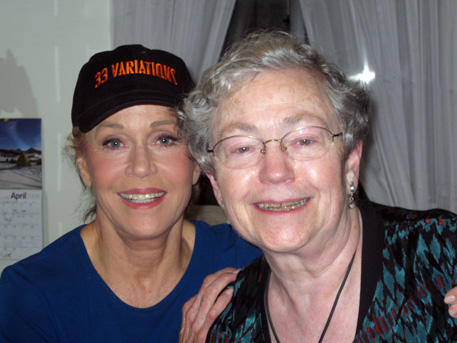 Friends from Atlanta were also there 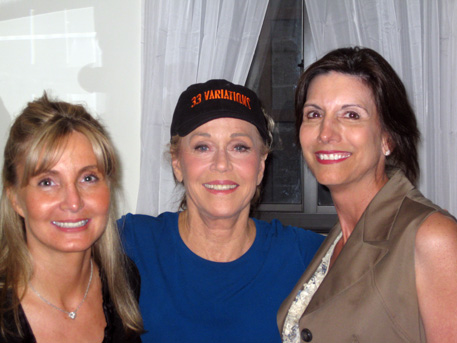 Now I am going to get a drink while waiting for “Exit The King” to start at 7:30. I am so excited to see this play in which Geoffrey Rush has gotten such rave reviews–same for Susan Sarandon. This is a special performance for the Actors Fund which is why I am able to see it. These shows are supposed to always be especially great because the audience is filled with actors. All the performers are performing for free and this is their 9th show this week. Whew and bravo! Susan Kellermann and Samantha Mathis are also seeing the show and hopefully we’re sitting next to each other. Right now I will troll the neighboring bars to see if I can meet up with them. They haven’t answered my emails.

Sitting now at some bar finishing the newspapers and eating Broccoli Rabe and cranberry juice with vodka. This should both nourish me (I always eat something dark green every day) while giving me just the right buzz to enhance Geoffrey Rush’s insanely inventive performance.  Can tell that just by looking at the photos of him in the role. I plan on going backstage afterwards and will take pictures–this will be a fun role reversal.

I like that I can do things like this, sit and do my thing and overhear people’s conversation and no one recognizes me. By the way, the buzz is that “9 to 5: The Musical” will be a smash hit.
People are loving it. Right now the bartender is talking to 2 customers about how great it is that all the older actresses (“Angela Lansbery, Estelle Parsons, Jane Fonda)–are on Broadway now and haven’t had to miss a show. “Yes,” said the customer. “They’re pros.”

############
So, I have finished the “Week in Review.” Enjoyed particularly Frank Rich’s article, “The Banality of Bush White House Evil” which shows that the torture sanctioned at the top was not so much about getting information about Al Qaeda as it was to get their victims of torture to say that there was some 9/11/Al Qaeda/Iraq connection they could use to justify going to war in Iraq. They never did get such coercised, falsified “confessions.”

I will report back later.

It’s later. I’m home and about to go to bed. I fell all over myself laughing and enjoying Geoffrey Rush as the King. The other actors were terrific too but Geoffrey was extraordinary. Went back stage with Samantha and Susan. Jane Powell, Angelea Lansbury, Lynn Redgrave were all there to congratulate the actors. I tried to get photos but my blackberry camera didn’t work.

Must get up early tomorrow (my day off-ha ha!) To get dressed and madeup for the dress rehearsal of our Broadway Cares skit but first, I am doing a Planned Parenthood Fundraiser. The dress rehearsal will require us to be at the Minskoff Theatre from 2:30 till 5:30, then – am joining Mary Catherine Bateson for dinner and taking her to see Tovah Feldshuh’s “Irena’s Vow“. Whew! Some day off.