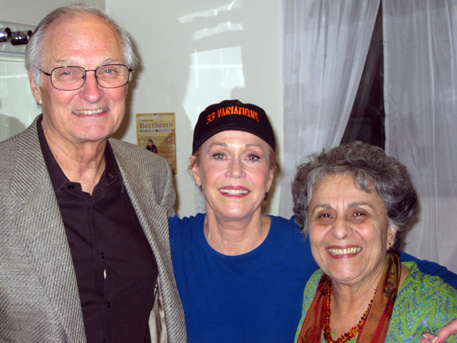 Alan Alda is in the audience tonight with his wife Arlene. I will be very happy to see them after the show. I got to know him when we did Neil Simon’s “California Suite” together. I have his book, “Things I Overheard While Talking To Myself” by my bedside. But I haven’t been able to read anything while doing this play. This is not what I expected. Can’t write either. Nor have I been able to go to any museums though I really wanted to and got such great suggestions from my blogger friends. But Eve Ensler was right when she told me at the start that I wouldn’t be able to do anything else. Especially since I’ve been sick–I’ve had to cancel many plans.

One blog commenter asked me the other day to write about what I do from the time I arrive at the theatre–my daily routine. So I will do that tomorrow.

Alan and Arlene just left my dressing room. As I thought would be the case, they loved the play, totally got it and were very moved and inspired by it. Alan said that he, too, was unable to do anything else when he was in a play. “I was always worried about my voice,” he said. I asked if he’d been to the same voice/throat doctor that I have been seeing and he, “oh yes, I couldn’t get her out of my throat.” Turns out he also has the pornographic larynx print outs like mine.