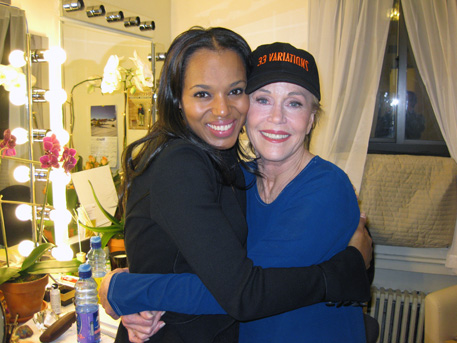 Last night Kerry Washington saw the play and came back. She loved it. We will be making a film together later in the year and are good friends. She was so happy for me, seeing me in such an exciting, strong play. She just finished a film co-starring Annette Bening and Naomi Watts. This may be the film that allows her to show what a powerful, deep actor she is. We hung out in my dressing for about an hour.

Today, Siegfried (of the famed Siegfried and Roy illusionist team) came back after the play full of praise for everyone involved. I forgot to get a photo with him. Dang!

Last Sunday, after our 3p show, Samantha and I went to the opening of “God of Carnage” starring Marcia Gay Harden, Hope Davis, Jeff Daniels and James Gandolfini. It was terrific. They were all extraordinary.

This afternoon, for the first time, someone’s cell phone rang during an important scene toward the end of the play. It really threw me and Zach and I was so furious I felt like leaping off the stage and strangling the person. You have no idea how that sound can throw an actor out of a scene. When I mentioned this to Siegfried, he said he could see that it upset us and commented that he’d have threatened to sic his tiger onto the guilty party. Some actors are known to stop a show when that happens and yell at the person-Patty Lupone, Brian Dennehy and Jeremy Piven, for example. Don’t know if I’d ever have the guts but today I was surely angry enough.

Sil Reynolds and her daughter also came back after the show. Sil is a therapist. She and her daughter do Mother/Daughter workshops at the Omega Institute. She was stunned when she got backstage. “Jane, I had no idea the play dealt with a mother/daughter relationship like this.” She was rocked. “This is so like what my relationship was like with my mother…and hers with her mother-my grandmother.” If these challenges are a generational thing, Sil has surely broken the pattern with her own daughter. They seem so joyful about working together. And they are about to do a book on the subject called “From Both Sides Now.” 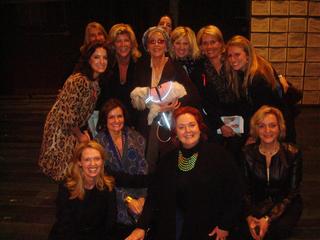