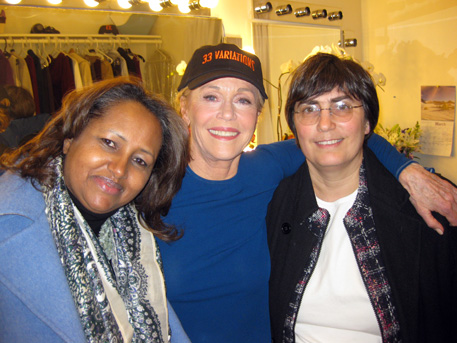 The friend in photo with me and Jessica Neuwith is Hibaaq Osman, a Somalia feminist who works with V-Day and founded a Women’s shelter in Cairo, Egypt. Jessica founded Equality Now, an international women’s legal advocacy organization who is currently working at the UN in human rights. They saw the play and we spent time catching up at Orso’s until Troy and Simone arrived for dinner.

Troy and Simone saw the play for the 2nd time and were moved this time in somewhat different ways. Troy is so smart about emotional themes. They say they’ll be back a few more times between now and when I leave the show, May 21st. I don’t like to think about this now.

I was so excited that Lily Tomlin saw the show tonight. She seemed genuinely loved. And was so happy to see Tulea who she hadn’t seen since Tulea was 2 months old and I brought her to Jane and Lily’s for dinner in L.A.(right after I got her–tulea, that is–in Montreal). 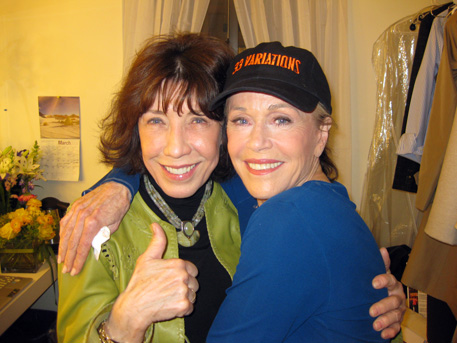 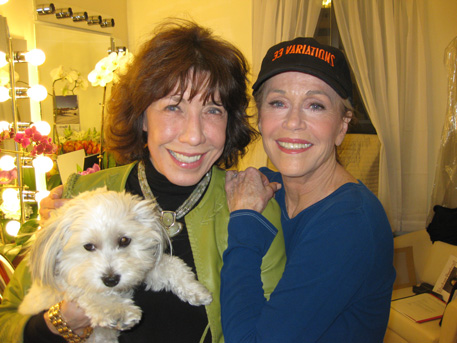 I was amazed by Yoko Ono. She looked spectacular. She wrote me the most beautiful email about the show.

Michael and Nina Lynne also came back after the show (which they said they really loved). Michael was co-CEO of New Line Cinema with Bob Shaye. They produced “Monster-in-Law” and were a part of Time Warner when I was married to Ted T.

Bonnie Schaefer who, with her sister, created Claire’s, also came back.

It was a fun night. See you next time