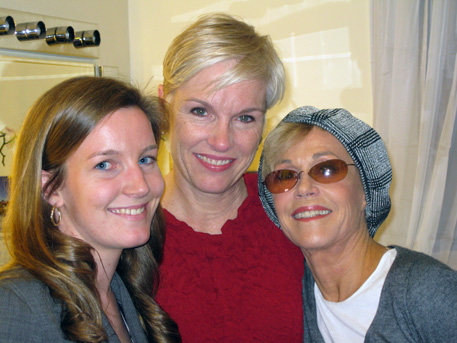 Last night Cecile Richards and her daughter Lily came to see the show. Cecile is the daughter of former Texas Governor, the amazing, indominable Ann Richards who died of cancer two years ago.

Cecile and Lily were deeply moved by all aspects of the play but particularly the mother/daughter relationship. I just received a very moving email from Cecile talking about her mother’s attitude toward death which were similar to my character’s in the play.

Cecile is the president of Planned Parenthood of America which is the primary health care provider to millions of women nationwide. Over dinner at Joe Allen’s, she told about the recent meeting on health care reform with President Obama at the White House; how very different the environment is now; how important it was that Planned Parenthood was invited in its capacity as a health care provider; how thrilling it is to have former Kansas governor, Kathleen Sebelius as Secretary of Health and Human Services; how the president was able to really listen and process what people said. We both hope that this administration will address adolescent health in particular, especially adolescent reproductive health. For example, African American girls are experiencing a real epidemic of HIV/AIDS. In my state of Georgia among adolescent girls in general there is an epidemic of sexually transmitted diseases such as Chlamydia. We have to stop our long-standing ostrich behavior, get our heads out of the sand, stop looking at reproductive health care from a moral perspective and view it, instead, as a public health issue as is done in other parts of the industrialized world.

I got to know Cecile when she and I traveled the country together in 1998-9 talking about the potential treat to Roe v. Wade as well as comprehensive sexuality education and other aspects of reproductive health if George W. Bush was elected. Our concerns were well founded as the subsequent 8 years have shown. New rates of rising teen pregancy rates as well as STD increases can partly be blamed on the previous administration’s policies.

Looks like that is on the way to changing. Fingers crossed. No!! Too passive!! Voices raised!!!