Does it seem weird that I like having our writer/director, Moises Kaufman, see the play and give me notes even though we opened March 9th? I find it comforting. People have been really enjoying the play, are visibly moved by it and by my performance and they don’t seem to be buttering me up. And yet…I knew there’d probably been a subtle drift-not landing a particular line in just the right way; thinking it was to try for a laugh when, in fact, the line was meant simply to contextualize another character; here and there becoming a tiny bit too chummy with my daughter when I needed to remain remote and more judgmental; too emotional here, too enthusiastic there. Mind you, no one would ever even notice these things. Not really. We’re talking subtle tweeking here. But I needed to be reined in and set back on the straight and narrow. I am waiting right now for the call to places at the top of the show (5 minutes from now) and I am chomping at the bit to put Moises’s notes into play. I know it will make my performance that much more rigorous and taut. He promised he’d come back every couple weeks. I wonder if a time will come between now and when we close the show at the end of May when there won’t be any notes from him-because they’re not needed.

We’re now at the point in the second act where I have almost 15 minutes before I go on again and I can’t resist writing– the play feels like its soaring! All Moises’s notes have worked terrifically for me. I wish he was here to corroborate my feelings.

I have friends out there tonight…Karen Nussbaum and her husband, Ira Arlook. It was Karen who, when the Vietnam War ended, began to organize women office workers and from whom I would hear stories of what their situations were like in their work places. Karen founded 9 to 5: The National Association of Women Office Workers and that led to my making the film “9 to 5” (which is soon to open as a musical on Broadway with music by Dolly Parton). Ira founded the grassroots canvassing organization, Citizen Action, back in the late 70s. 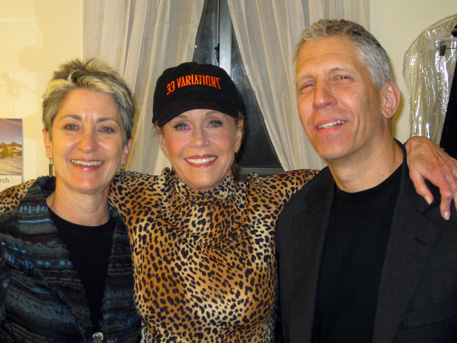 P.S. And the show ran 4 minutes shorter tonight. We were flying!!