Whew! Even though I had yesterday (Sunday) off I didn’t get to blog. First of all, my daughter Vanessa, Samantha Mathis and three of her friends all went out till 2am and I slept till noon which is a first for me. They are all really smart people and had insightful things to say about the play which they found moving.

Last night I watched a DVD of the documentary someone sent me called “Trouble the Water” about hurricane Katrina. It is a very powerful view of that disaster. It starts off as a video made by a young black woman named Kold Medina who lived in the Ninth Ward. Kold and her family couldn’t “afford the luxury” of evacuating (no evacuation plans or vehicles were made available to those who had no car) so she decided to document the experience on her own. Because Kold is so charismatic, fierce and generous, I was drawn into her story. Later, after her family had finally managed to leave the city, she somehow hooked up with professional documentary filmmakers who weave together her very rough, hand held video work with their own filming to create the final product. I may be wrong, but I heard it was nominated for an Oscar. Danny Glover is one of the producers. It’s authenticity gives it a power that other films about Katrina have lacked.

We just did a complete dress rehearsal and tonight is our first public performance. I feel very ready. I need an audience now. Not that there won’t be mistakes, forgotten cues, dropped lines, etc but time and repetition will cure that. I have a number of close friends coming tonight: Gloria Steinem, Eve Ensler, Pat Mitchell and Scott Seydel, Sharon Fergusen Maxwell and her daughter, the actress Megan Maxwell. I am so glad they are all coming to be with me and the play tonight.

I have gotten such beautiful flowers this afternoon and they make me so happy. Val Kilmer sent me the largest bunch I have ever received. He is such a dear friend and neighbor in New Mexico. Kimberly and Katherine who own the Pilates on Fifth sent me gorgeous roses and the Women’s Media Center staff sent a white orchid. I will take my nap surrounded by the sweet smell of love. 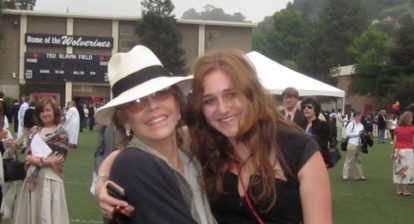