There were 21 of us gathered in photographer Mark Seliger’s studio complex, a fixed up warehouse way down at the bottom of Manhattan. Just to mention the people I knew there: John Glover, Matthew Broderick, Geoffrey Rush, Susan Sarandon (totally gorgeous), Joan Allen, Jeremy Irons, Marsha Mason, Jeff Daniels, Marcia Gay Harden. Representing “33 Variations” with me were Colin Hanks and Samantha Mathis. David Hyde Pierce, like me, felt awestruck by the roomful of talent. He is so nice. I seem to only meet up with him backstage at events but it’s always a pleasure.

Especially nice for me was to be able to reconnect with Jeff Daniels. I got to know him when I visited the location of Ted Turner’s TV epic “Gettysburg” many years ago in which he was brilliant. He is an extraordinarily talented, intelligent and multi-faceted actor. He’s in rehearsal for “God of Carnage” with James Gandolfini (also there), Marcia Gay, and Hope Davis (also there). I told him “bravo” for his work promoting Michigan as a place to invest in. Maybe you’ve seen his commercials on TV.

I hadn’t seen John Glover since I turned over a table on him in a scene in “Julia.” He played Meryl Streep’s brother. He’s rehearsing for “Waiting for Godot.”

Being in that room with all those talented actors made me very proud of our profession. And what was most interesting both to me and to Samantha was how scared they all are about the process. That’s how I felt 6 weeks ago. It’s kind of great being the ‘old-timer’ on the block. We’ve been in rehearsal longest and will open soonest so I’m over the hump of feeling like I want to crawl into a dark hole.

I didn’t get a chance to talk to Geoffrey Rush but Colin did. Like me, Colin doubted that Geoffrey is nervous but he did tell Colin how much he loves what he feels is the unique Broadway community—even if we don’t all know each other, we feel bonded through the work. There was a real sense of community in the room today. I am proud to be part of it. And grateful.

As you may sense, I am starting to feel better. Whew! When I got to the theatre after the photo shoot, we got notes from Moises as well as what may well be our last script changes. I am very, very pleased with all the changes he has made in the last few days. They’ve simplified and clarified. Now to marinate in them long enough to make them part of my DNA before the critics start to come next week.

Share This Post
Previous ArticleOld FriendsNext ArticleYour Relationship With Christ
You May Also Like
PARTY NIGHT
April 19, 2009
POLY PREP AND OTHER RECENT EVENTS
March 18, 2010
THE GOOD DOCTOR AND CULINARY BRAVERY
April 14, 2009
JaneFonda.com Store Is Up
July 18, 2009 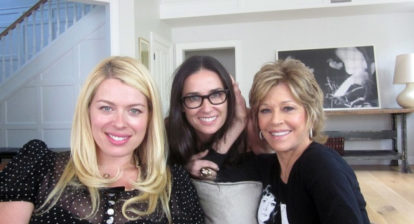