Sooo exciting today. I’m moving into my dressing room—my hood for the next 5 months. It’s great. Here’s a picture of it. And there’s a little ante chamber where my friends can hang with me afterwards. I’ve already stocked the wine. 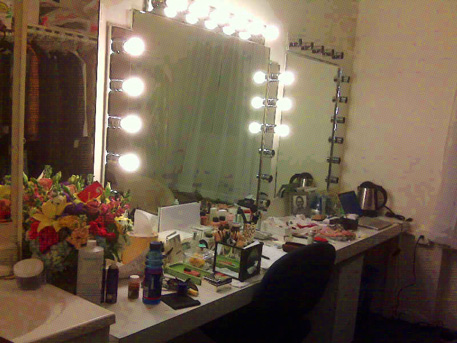 This is such a magnificent theatre. I’ve taken a picture of the ceiling but it doesn’t do it justice. AND THE SET! OMG. Seeing everyone in costume and makeup is a trip. Erik, Don and Zach are transformed into characters out of the 1800s. 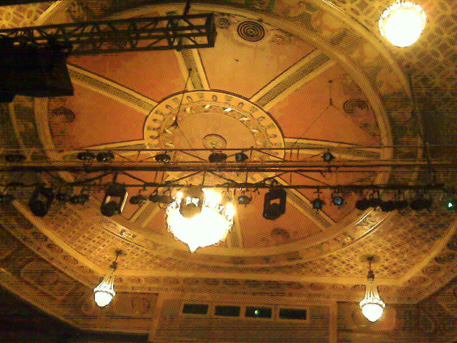 Ceiling of the Eugene O’Neill Theatre

Running through the scenes from the stage where we’ll be playing takes some getting used to. For 3 weeks I’ve been looking out at a lit up room filled with red seats where I could see everyone’s faces. Now, it’s a dark hole. I’m working on two things: imaging all those seats out there that I can’t see filled with loving, friendly people and projecting my voice and my feelings far enough to fill the place—right up into the balcony. The acoustics at the Eugene O’Neill are wonderful so I should get used to it soon. New ideas have been coming to me during this tech rehearsal—just being in makeup and costume and on the set is inspiring. I’m so glad I didn’t “chicken out” and not agree to do this out of fear—after 45 years. I could say it’s like sex and riding a bike—it comes right back… but not really. Mostly this because I am so different as a woman.

My wonderful force-of-nature-friend, Eve Ensler, came by to visit. She knows and loves Moises. In fact, she was the person who first told me that Moises had a new play to send me. She brought a box of cupcakes from Magnolia for the cast and I devoured a –what is it called?—the kind with white frosting on a red cupcake? They’re my son’s favorite. I had no intention of eating it all; just a polite taste was what I planned. Except I couldn’t stop there—it was too delicious.

Eve also brought me a gift—it is a rock from the Moroccan desert that has been split open and when you look inside the two halves, you see a glistening, shimmering miracle of crystal and mica. “This is how we are when we are broken open,” she said. ‘We’ means we women, artists, warriors. It the perfect Eve gift—I will keep it on my dressing table. A constant reminder to allow myself to be broken open.

I left rehearsal tonight in a temp wig and costume to go downtown to the screenings of The FTA Show. David Zeiger and I came in after the first showing was over and answered questions. Joining us was Marlisa Grogan, Captain in the US Marine Corp (29 UES). I had never met her before and was very impressed. She has such a deep understanding of why it is important for us to support active duty members of the military who are anti war or, at least, anti a war they feel is wrong and ill-conceived. She herself has been involved in an anti war show that has performed for active duty personnel. She said that it is the soldiers who have seen active duty who tend to be anti war more than the ones who have stayed stateside. “They just don’t know,” she said. 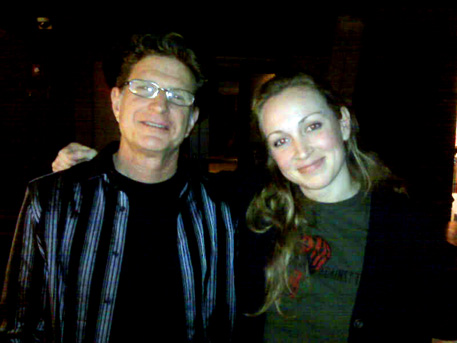 David Zeiger and Marlissa Grogan, Captain in the US Marine Corp.

She talked about the similarities that exist between today’s military and those of the Vietnam era but also pointed out the profound differences, citing in particular, the fact that so many recruits are confronted with the choice between jail or military. For many it’s a much needed job. Look how young she is, yet so wise and committed. “We can’t just rely on the hope that Obama has brought us,” she told the audience. “We have to get off our asses and make sure we organize and speak out for what we feel is right.” 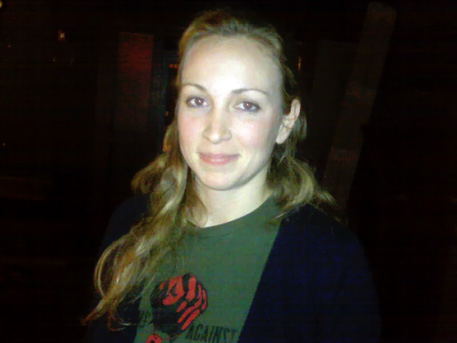 The three of us stayed to introduce the film to the second-showing crowd. In between showings I was so happy to see old friends playwright Barbara Garson, who I write about in my memoirs (and who wrote some of the original FTA Show) and D.A. Pennebaker who filmed a documentary of me years ago when I was in rehearsal and then on Broadway in a deservedly ill-fated play. It lasted one day.

It is amazing to watch the FTA film now. Quite unbelievable that we actually did it.

Then I returned for another hour of rehearsal and now I am signing off. It’s midnight—not bad for a gal whose normal bedtime is 9pm.