This is the first day of rehearsal. The first gathering of the people who will be my family for the next five months. For the next 3 weeks we’ll rehearse in a funky theatre in the East Village. 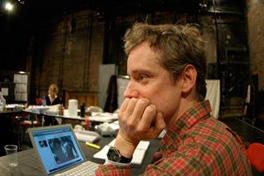 There is Zach Grenier who is playing Beethoven (photo); Erik Steele who is Anton Schindler , Beethoven’s Assistant; 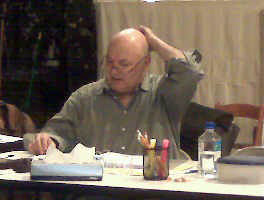 Susan Kellerman, who plays Gertie who cares for the Beethoven archive in Bonn, Germany; 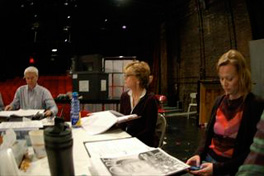 Samantha Mathis who is my daughter Clara with whom I have a complex and trying relationship; Colin Hanks who plays Mike, the nurse, who falls in love with her; 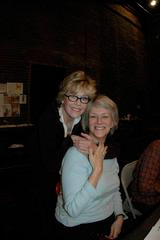 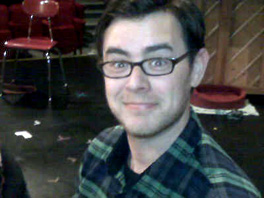 and then the wonderful classical pianist Diane Walsh, whose music will be interwoven throughout the play. 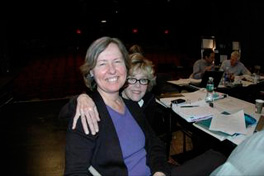 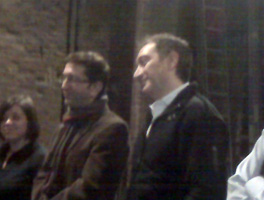 Moises and his partner Jeff Lahoste

We all sat at tables that have been arranged in a circle, and standing around us is an even larger circle of what seemed to be about fifty people. Who are all these people, Samantha and I wonder? After an enthusiastic welcome, David Binder, our producer, asks everyone to introduce themselves. It turns out they are the other producers (so many that I don’t see how any of them will make any money!): the set designer, the costume designer, the publicists, the sound designer, lighting designers, Heidi Neven, the Company Manager, Linda Marvel, the marvelous Stage Manager, all the tech crew. An impressive army of friendly people who will be surrounding us during the production.

After that, everyone left except the cast so that Kimberly Rimbold, the Actors Equity representative, could meet with us about our union Actually, Actors Equity is not a union, it’s an association within the AFL/CIO which means we can’t strike without their permission. She talked about Equity regulations, medical benefits, how many hours we can be made to work before we’re required to have a break (VERY happy about those regs!) She told us of the research that is being done by Actors Equity to determine why there are so many accidents on stage (mostly musicals) and what can be done to protect them. I don’t remember ever having this kind of meeting in Hollywood. Maybe a SAG rep comes to the set but no ones knows who it is. I liked the meeting. It reminded me that we are part of a craft; crafts people. It enhanced the sense of community, a tighter community of actors than seems to exist in Hollywood. Maybe it’s because we rehearse for weeks which is a rarity in Hollywood. Maybe it’s because we all live much closer to each other in this compact city. Actually New York is more of a community than the wildly sprawling Los Angeles. Yes, there is intimacy on the set while shooting a movie, but everyone is rarely all together as a group. Often you never even meet all the cast until the wrap party (the celebration of the end of shooting). 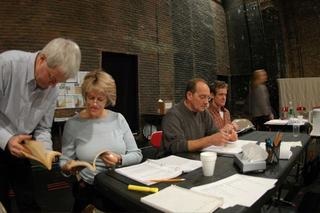 The dramaturge Mark Bly talking to Susan. Zach Grenier who plays beethoven is next and next to him is Erik Steele who plays Anton Schindler, Beethoven’s secretary

It’s clear from the get go that Linda Marvel, our Stage Manager, is very good about calling breaks and making sure we don’t run overtime. As Moises said, her name suits her, she is a marvel. During a break she tells me that earlier in the year she attended the Women’s Forum in Deauville, France, and she’s going to send me the link to it. I remember reading about this in the New York Times and thinking that I’d like to be part of this in the future. 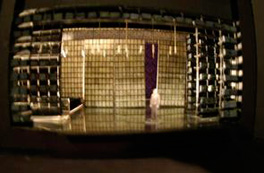 A model of our set. It is spectacular.

The set designer, Derek McLane, showed all of us the impressive model of the set. I keep my concerns about how the brightness of lighting will make us all look. There seems to be a lot of overhead lighting. Uh-oh, it’s fine for Samantha, but I’m 71. Have to think about this. Still, the set is actually a character; it moves, it turns, it twists, it dances.

Then we began our first full reading of the play from beginning to end. Four of the actors, Erik, Don, Zach and Gertie have done this before…in La Jolla and DC. They are old timers. Colin, Samantha and I are the newcomers. It’s exciting to hear all these voices for the first time. And surprising to realize the extent to which my character, Dr. Katherine Brandt, conjures up the past so that it is constantly interwoven with the present. I realized during this reading, how much humor there is.

The end of the first day, I’m wiped- and so happy and so excited and so grateful to Moises for bringing me into this process. I think this is something that will be a real part of the second scene of my third act. I feel sure I’ll want to do more theatre. There is a reason this came up at this point in my life, interrupting my writing of my book on aging, yes, but perhaps it will inform it in some new way. In fact, I’m sure it will.