Couldn’t sleep. When I finally did I dreamed of my pal, Bob Redford. He showed up just when I needed him: I was supposed to catch a plane but discovered I’d forgotten the bag I have to carry Tulea in. I knew I wouldn’t be able to get her on without it. Bob devised a way to sneak her on and then snuck himself on as well. I remarked to myself how playful and happy he seemed and that made me happy. This dream morphed into one in which I woke up in a bedroom with Vanessa, my daughter, and my grandkids, in a panic because I’d overslept by 3 hours and knew how upset Moises and Linda, our stage manager, would be. On top of that, Tulea was nowhere to be found. Talk about anxiety!!

It turned out, however, to be a good day of rehearsal. Ran lines with Catlin, my understudy, this morning which was helpful for both of us (she needs to learn the lines, too). Zach’s father is close to death from late-stage Alzheimers in Pennsylvania. He left last night to be with him so we had no Beethoven today but we were all happy to hear that his father rallied enough to be able to talk to Zach. Closure is key.

We got a good chunk of the 2nd act on its feet. At lunch break I sacked out, needing to make up for a turbulent night. (photo of me sleeping with Tulea) When I woke up, Colin told me he’d spoken with his father, Tom Hanks and stepmother, Rita Wilson. Tom has been asked to read a letter written by Abraham Lincoln at the Obama inauguration. Tom told Colin to tell me that he had just been listening to a recording of my father reading the same Lincoln letter many years ago with the London Philharmonic Orchestra. 6 degrees of separation!

In these days leading up to the inauguration, I’ve been thinking a lot about my father’s deep connection to Lincoln. His library was filled with histories of Lincoln. How he would have loved Doris Kearn’s Lincoln biography! Remember, Dad played Lincoln in John Ford’s movie “Young Mr. Lincoln.” How he resembled that great president!! 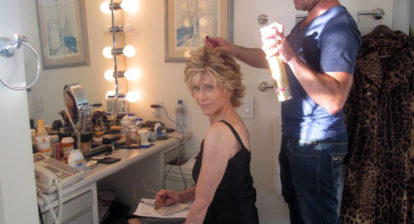 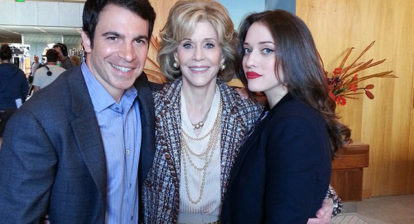