You might wonder why, at age 71, I am launching my first blog. Well, good friends of mine (Rosie and Lily) have been avid bloggers for a long time and I’ve noticed that what they offer is interesting and provoking. Provoking is good—provoking ideas, thoughts, laughs, compassion and just plain fun. I like to provoke. I have interesting friends, an amazingly diverse and interesting life and family, great photos. There’s a lot to get into on a blog.

So—I had breakfast in Atlanta in the beginning of January with my friend, Matt Arnett. Matt really wanted me to meet a friend of his whose kids go to the same school as my grandchildren because he thought this tech-savy friend might be able to help my Georgia-based Non-profit, The Georgia Campaign for Adolescent Pregnancy Prevention improve its website. (More about that another time). Actually, we never even got around to G-CAPP because I got so inspired to start my own blog. Matt, James (that’s his name—James Andrews) and James’s wife Sherrelle Kirkland-Andrews, pointed out to me that there’s such malarkey floating around the net about me. Why not begin to tell my own story, my thoughts, and activities (past, present and future) rather than letting others—sometimes hostile others—try to put out their own spin on me. That’s part of it. But the idea also occurred to me that I was about to launch into a new adventure in this third act of mine and that it might be interesting to bring people along with me.

The adventure is that I am returning to Broadway for the first time in 45 years. Why not try, with this blog, to convey what it’s like… day by day…the excitement, scariness, the highs and lows.

So, although I’ve just gone online today, I have, in fact, been blogging for three weeks now and you can follow all the posts from the beginning by clicking here.

Today, during lunch break, I took my dog, Tulea, for a walk and it really hit me how much I miss my dad. When he returned from his stint in the Navy after WWII he went straight to Broadway to star in “Mr. Roberts.” He played that role every day for four years, never missing a performance! It was not customary in those days—the 40s and 50s—for movie stars to go back and forth from Hollywood to Broadway. But theatre was Dad’s great love. My brother and I grew up knowing and respecting this about him. He loved the immediacy of playing before a live audience. The instant feedback. He was meticulous, always doing exactly the same things, the same moves, the same inflections, every night. I have heard this from so many of his fellow actors.

Now that I am doing theater again after a huge absence, I can’t help but wish he was still here with me–to see. Not that he would give me advice. That wasn’t his style. But I wish he knew that I’ve come back to his place of love.

There have been days during these weeks of rehearsals when I seem incapable of doing the same thing over and over…even twice, never mind for 4 years! I wonder how he was able to do it. I want to please him…still. Do we ever get over this need to please the parent we were closest to?

Moises Kaufman, the writer and director, has us doing run throughs more frequently now and it helps so much to experience the sweep of the play. We begin tech rehearsals in the actual theatre—the Eugene O’Neill–next week (gulp!) so we are starting to fine tune and lock in the blocking.

I love watching the other actors in their scenes. So funny, so touching, so outrageous! I like how we are melding together as a unit, all watching out for each other. Colin (Hanks) has had a cold for several days and last night he had to fly to Las Vegas to perform a scene he did with the actors in the TV series “Mad Men.” We’re all worried about him and he left with all of us bombarding him with special remedies for stopping colds.

I couldn’t resist taking this picture of Don Amendolia who plays Diabelli, the music publisher whose small waltz is the inspiration for Beethoven’s great opus, 33 Variations. That’s him behind the paper, sleeping with Tulea during a break. 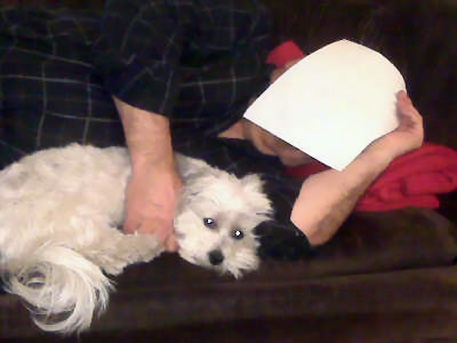 Susan Kellerman, who plays the librarian in charge of the Beethoven archive, is insisting that I grant them all visiting rights with Tulea when the play is over. “Over”! What a concept.

Tomorrow I have an early costume fitting so I’m off to bed.